The 29th December was a rare chance while staying in Dundee to get away early for a walk and not have any time constraint on getting back. I had hoped to sneak up Auchnafree Hill at some point while staying with the in-laws, but it looked like I'd manage a longer walk in Glen Artney in the morning and still have time for Auchnafree Hill later on.


Glen Artney.gpx Open full screen  NB: Walkhighlands is not responsible for the accuracy of gpx files in users posts
I left Dundee at 7:30am and was in Glen Artney an hour later, the darkness having turned to barely light gloom. I parked next to Dalchuirn and set off downhill to the Water of Ruchill. It was a bit breezy but warm and not raining, so not too bad. 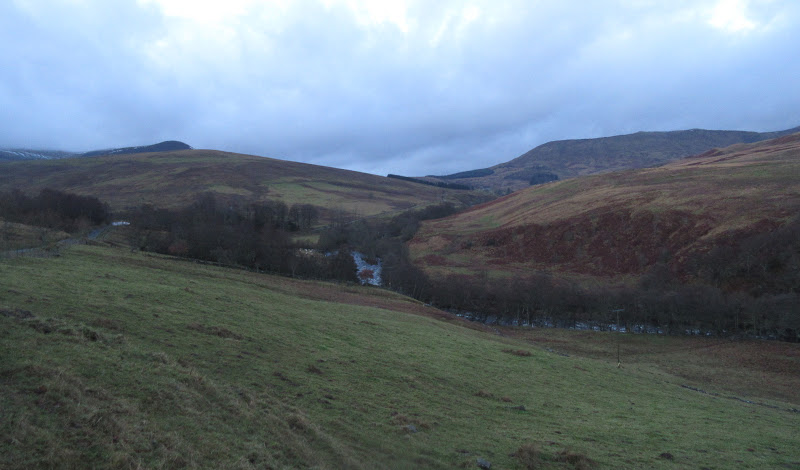 Across the river, I headed cross-country to join the track up to the quarry on the flanks of Ben Halton a shower started just as I reached the quarry. I picked my way through the various quarry levels on a fainter zigzag path, then it was out onto the heather. 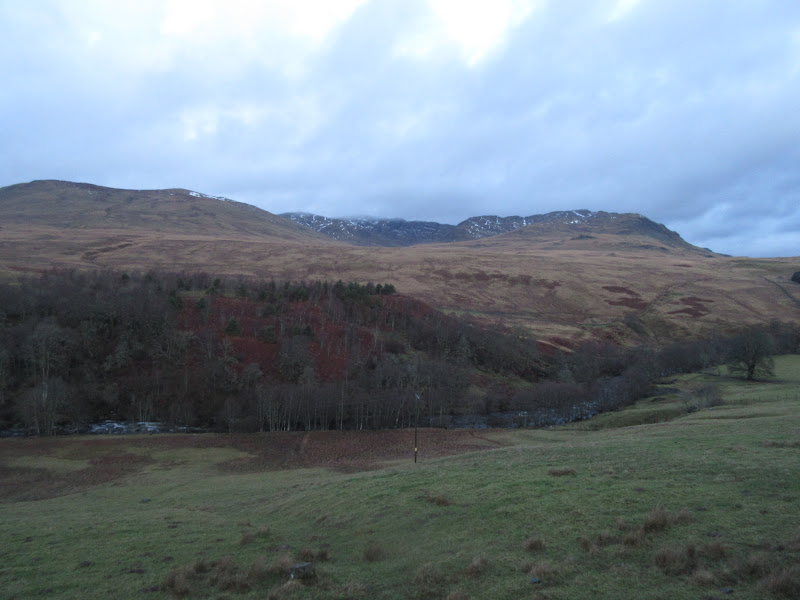 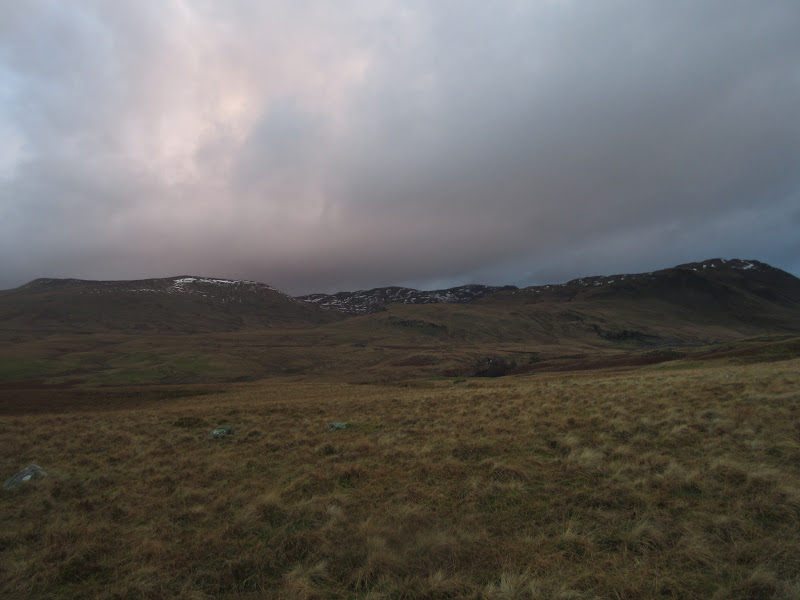 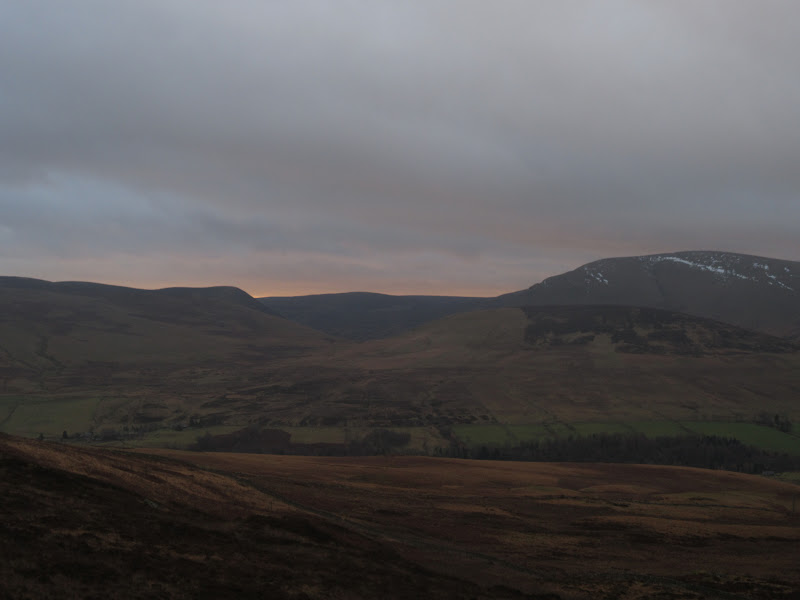 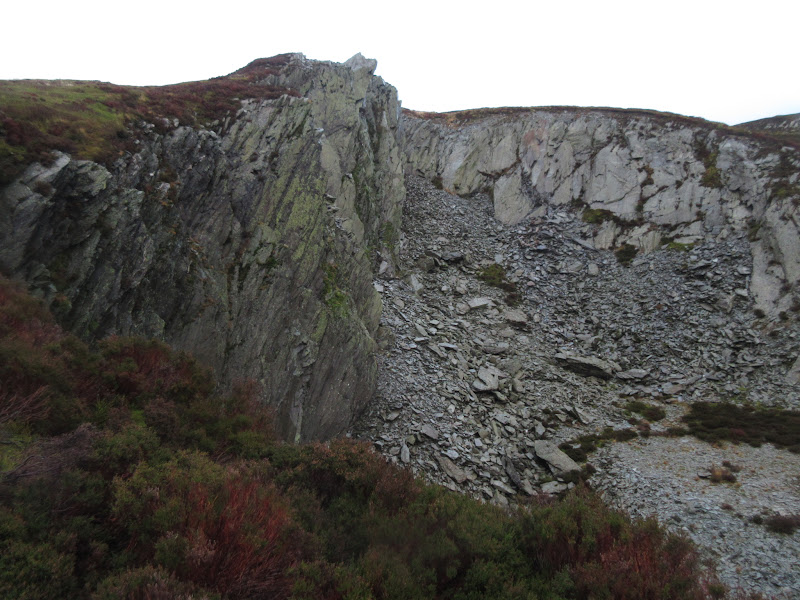 I hadn't paid much attention to the map and hadn't really intended to go over Ben Halton unless the weather was good. Heavier showers came on at this point, but I still ended up on the summit. A flick through the new Grahams guide (which I had given my dad for Christmas) had suggested that a deer fence might make traverse of both of these hills together awkward. If you don't like deer fences, then there's loads more of them now! I don't know if I followed the best line, but I had to climb at least four high fences today. 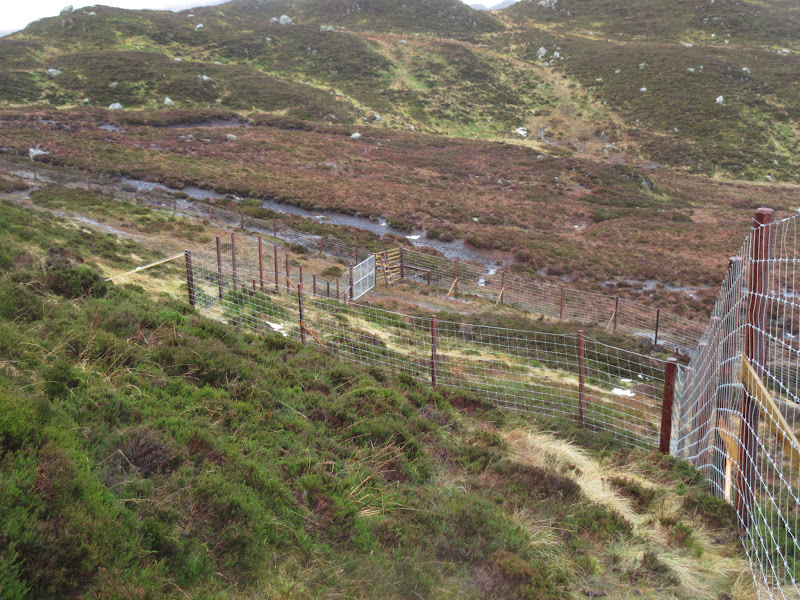 A pair of red kites had followed me on most of the ascent (I think - seems like I'm seeing them everywhere now). I lost them at the top. A short descent (with another fence crossing) led me to the final ascent of Mor Bheinn. I was hit by another shower and a squall of wind on the summit, but at least things looked brighter to the south. 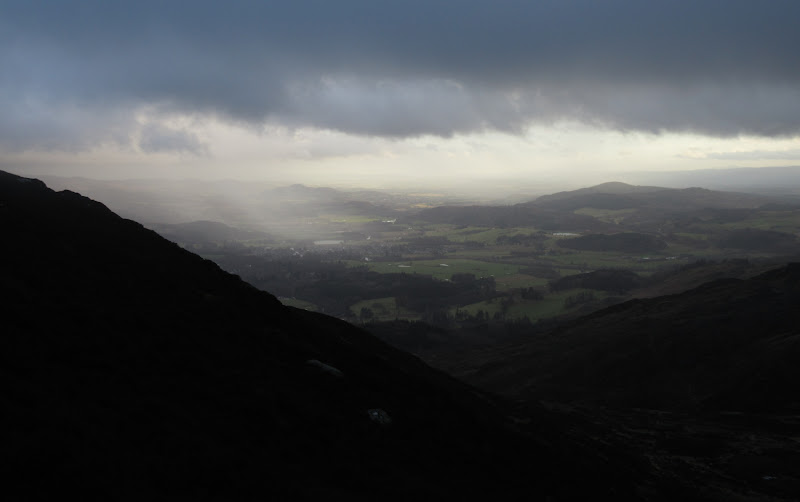 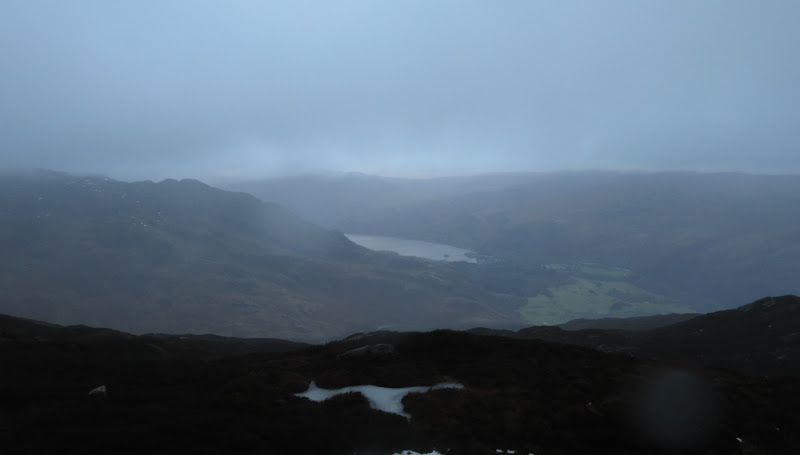 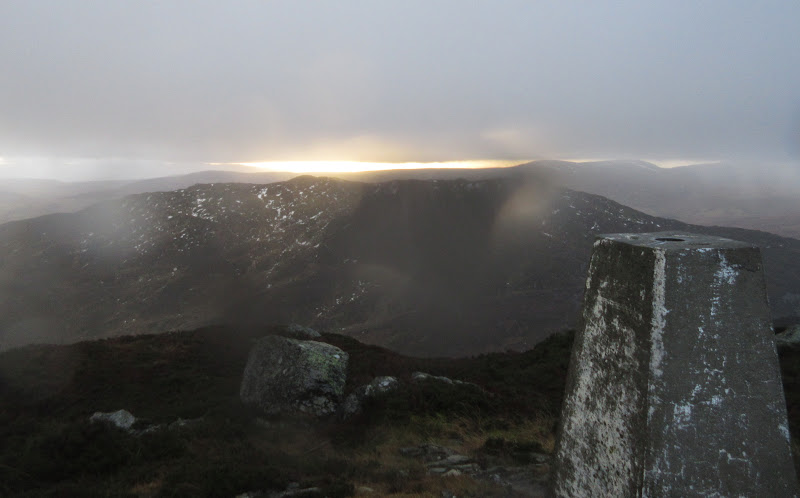 I retraced my steps for a short distance before a heathery descent to the low point between the two hills. Being a bit breezy, I stopped for an early lunch low down. Another fence climb led me to the steep NE ridge of Beinn Dearg. This looked a little daunting, but along with the high traverse between the two summits, provided the best walking of the day. 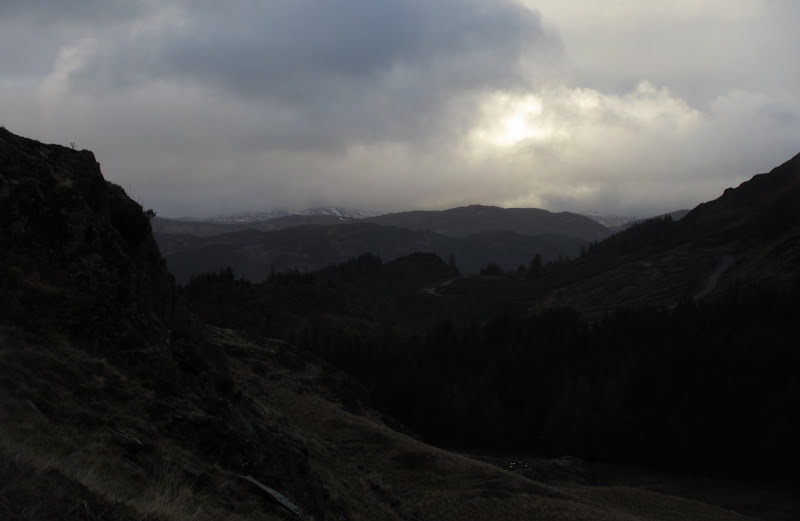 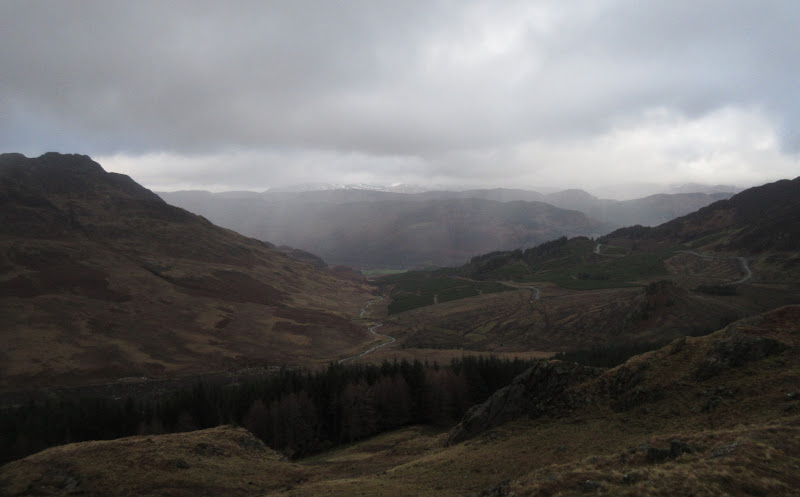 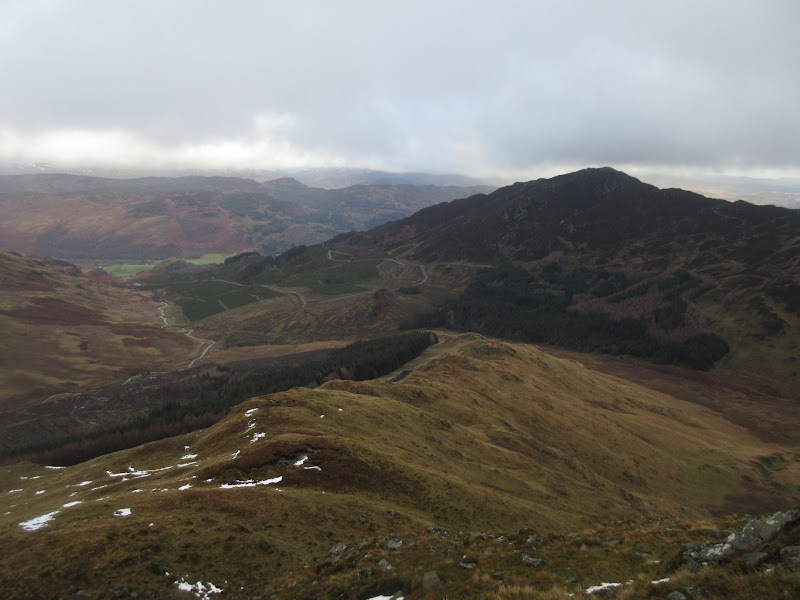 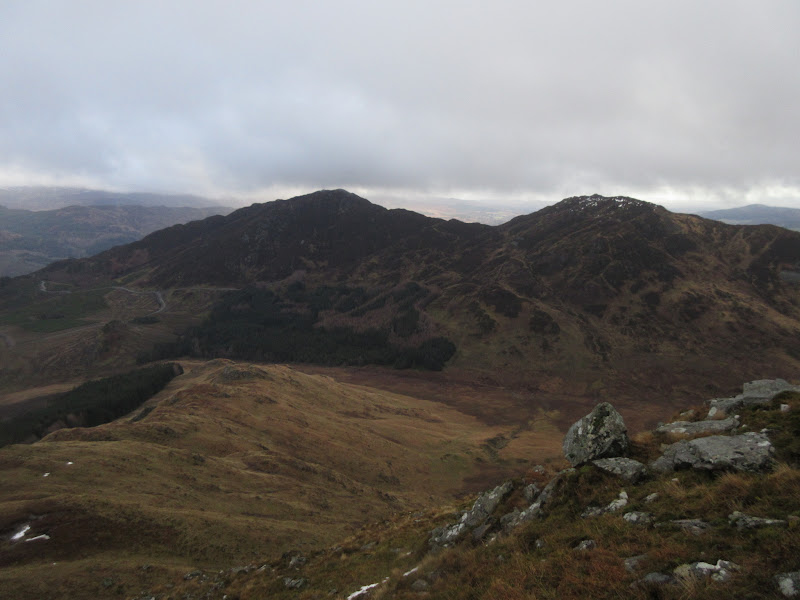 Smattering of sun on the Lawers hills: 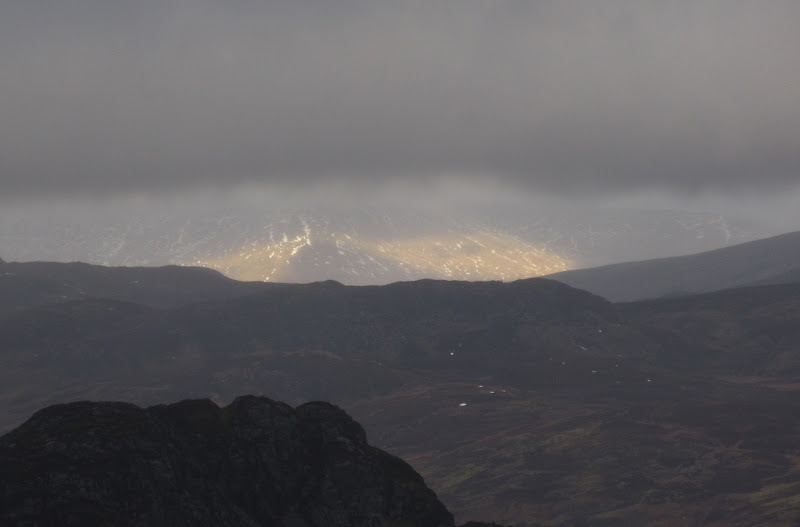 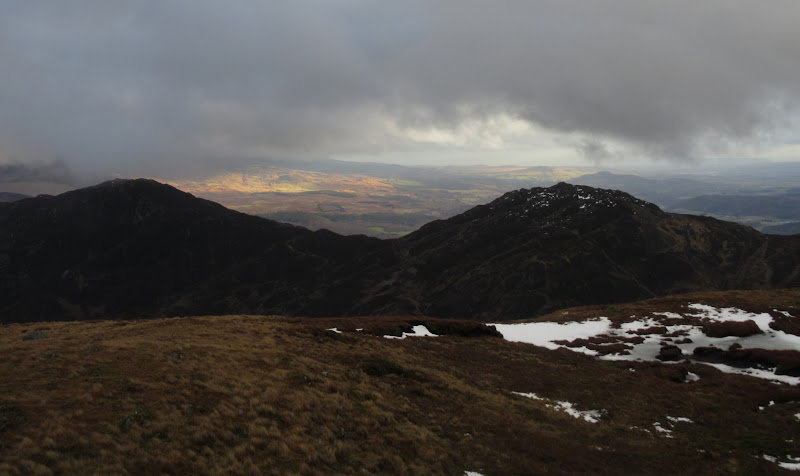 It would be an easy trot back to the car from here but the more westerly summit has now been recognised as the highest one, so I headed over there first. Although the wind was a little annoying, this was a pleasant walk. Better weather would have been good but there were some nice crepuscular rays in the direction of Uamh Beag and Dumyat. 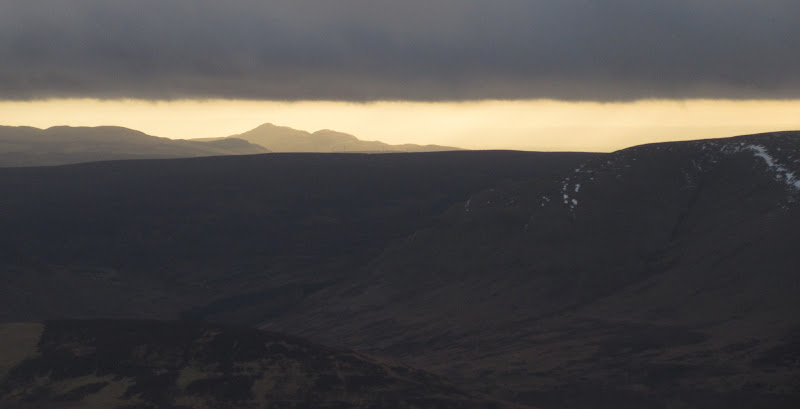 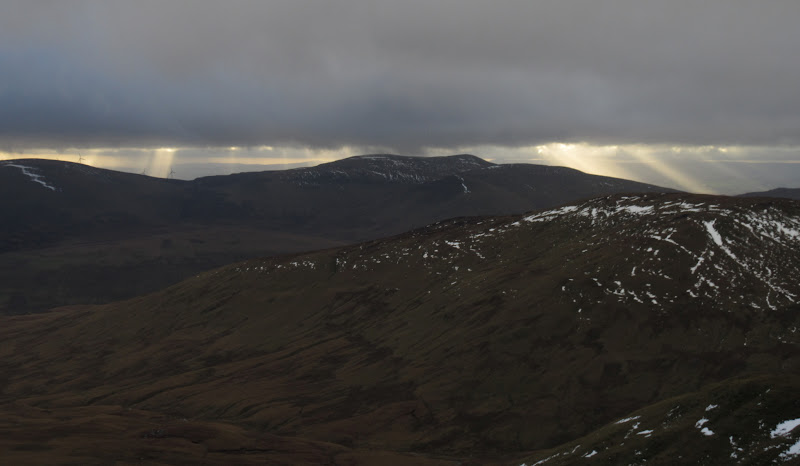 On the Beinn Dearg summit ridge: 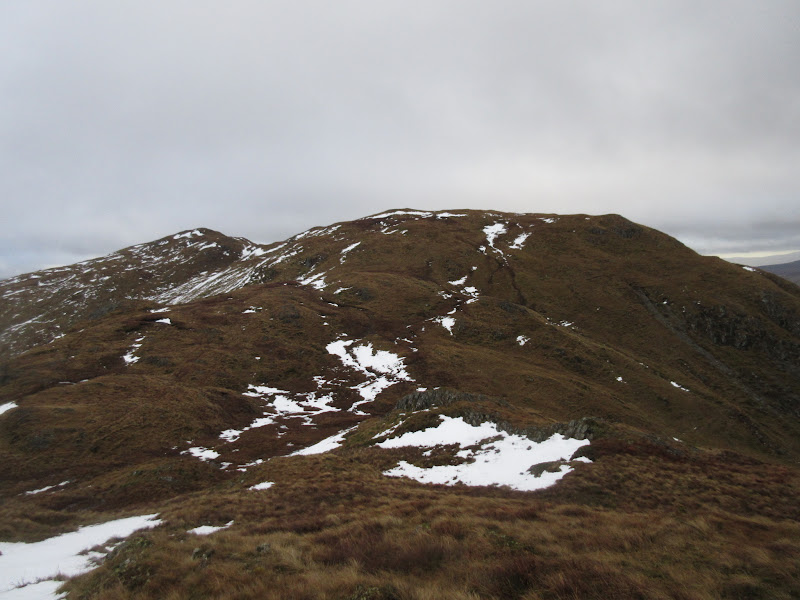 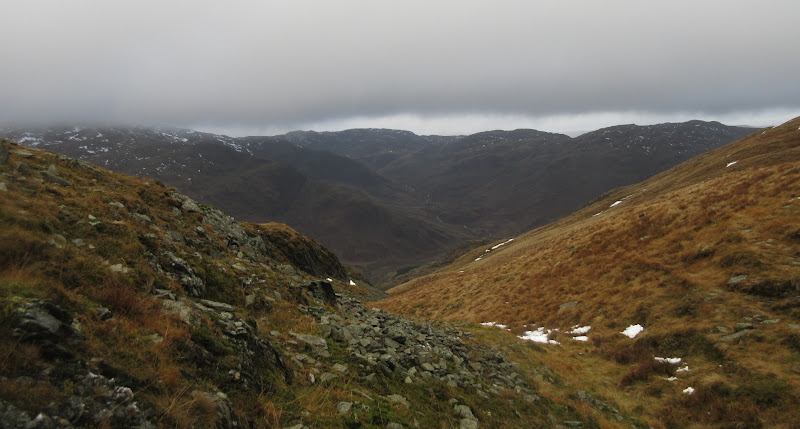 More ridge walking (sometimes avoiding the crest to keep out of the wind) took me to Sron na Maoile. Further progress south would have involved lots of peat hag avoidance so I dropped east, passing a large herd of deer and a pair of walkers on their way up. Before long (passing a nice waterfall) I was rejoining my outward route, and back at the car.

This is where they are hiding:

Falls on the Allt Coire Choire: 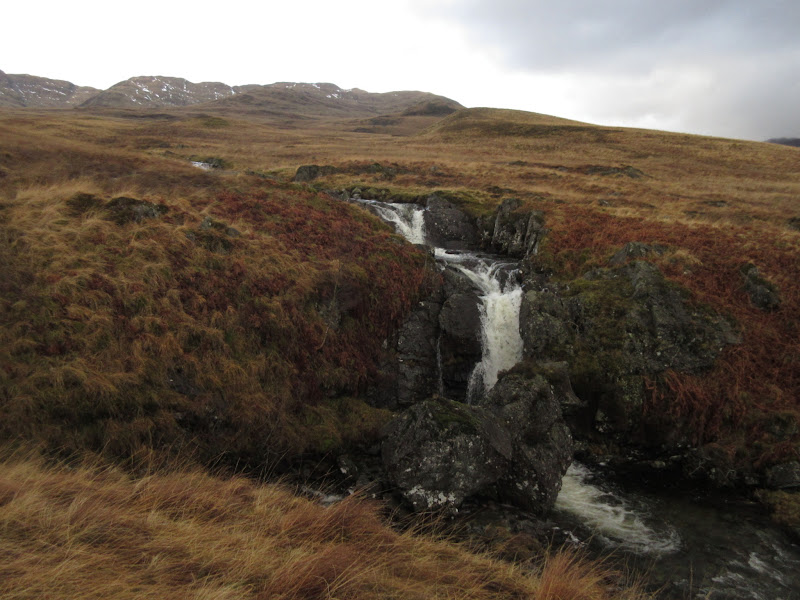 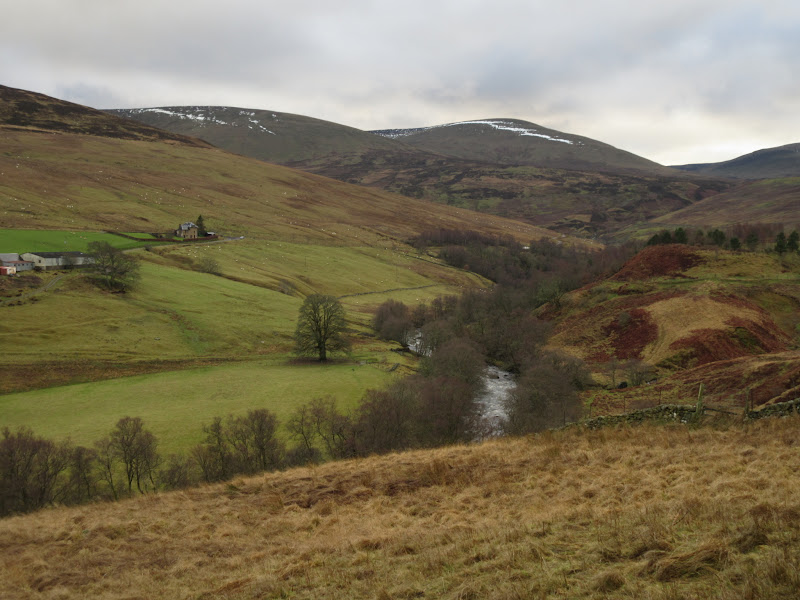 
Turret.gpx Open full screen  NB: Walkhighlands is not responsible for the accuracy of gpx files in users posts
The wind was supposed to be getting stronger as the day went on, but it didn't feel any worse than in the morning. In fact the best sunshine of the day was while I was driving back to Crieff and up to Loch Turret dam. I was setting off again just before 2pm in the knowledge I'd make the summit of Auchnafree Hill before dark, but probably not get all the way back down. 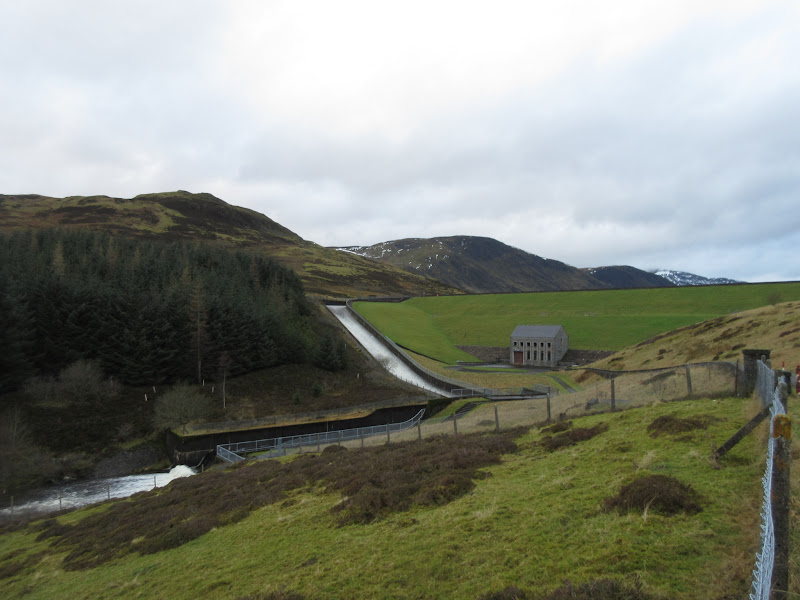 I set off along the eastern side of the loch before leaving the good track just after crossing the Allt Choinneachain. I worked my way up onto Creag Dhearg as this looked like the most interesting hill in the vicinity, and soon discovered a well trodden path - clearly this way was popular. 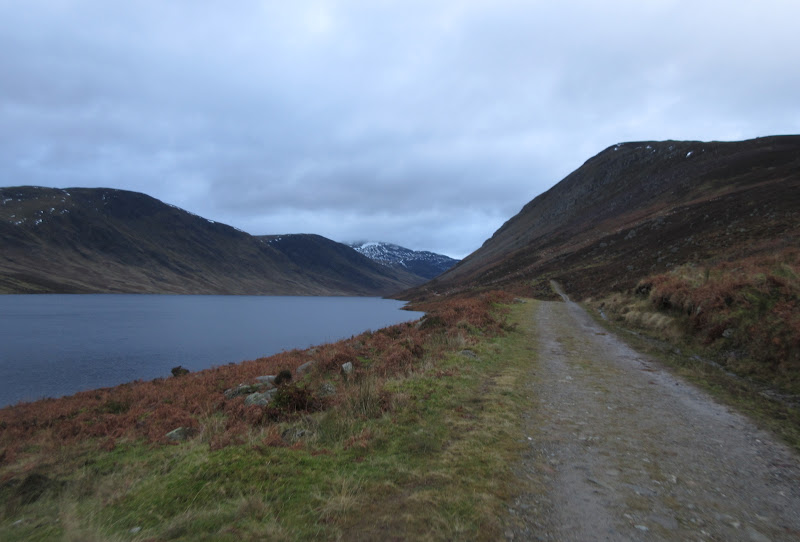 On the way up Creag Dhearg: 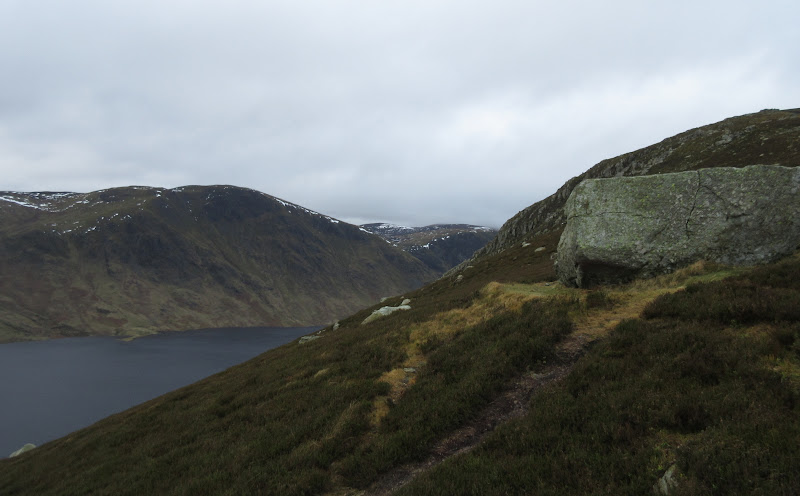 The path joined an estate track at a large cairn, which I followed towards Auchnafree Hill. As I was short on time, I skipped out on the summit of Choinneachain Hill, which is only a couple of meters lower than Auchnafree itself. 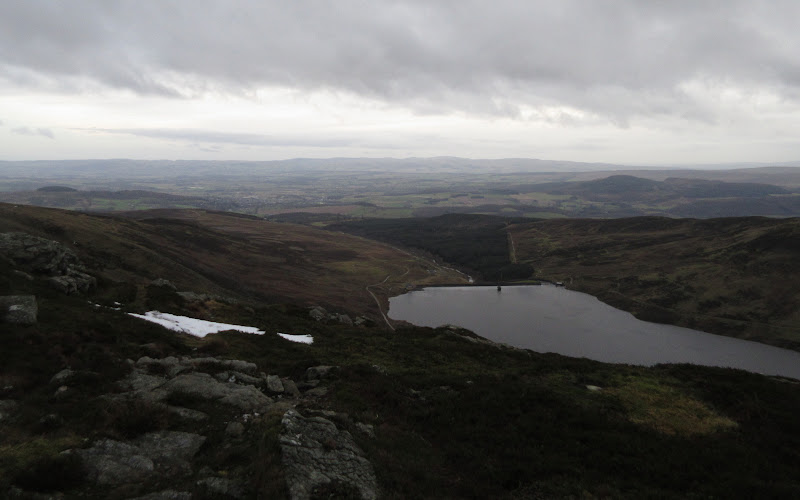 I hoped for swift progress towards Auchnafree Hill despite the extra up and down that the track took. I didn't make bad time, but most of the track was filled with soft snow, making the moorland on either side easier walking.

Across Loch Turret to Ben Chonzie: 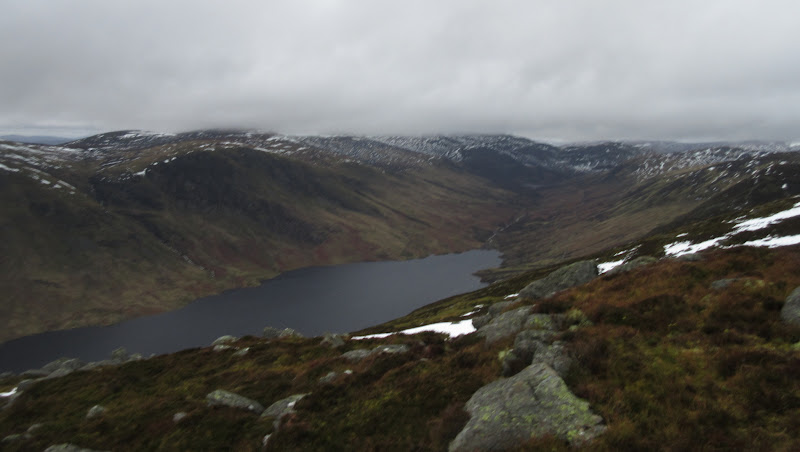 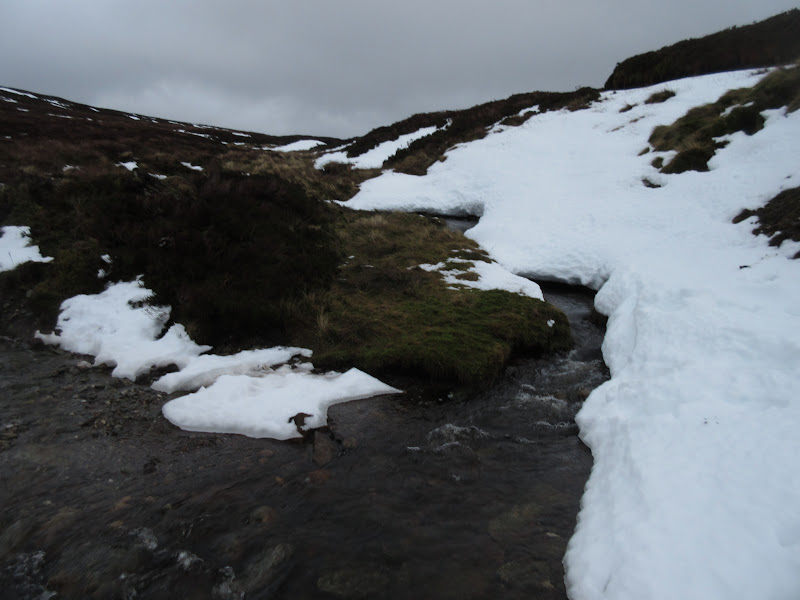 Track is holding most of the snow: 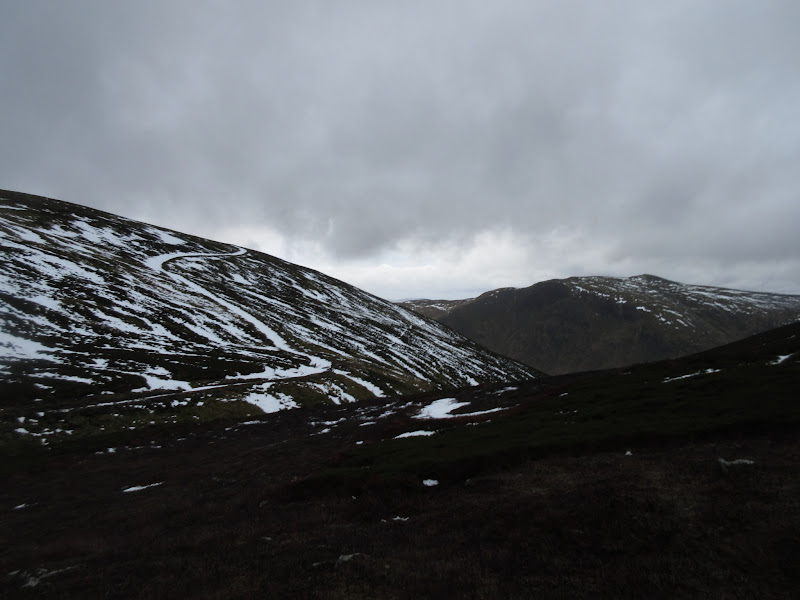 The final pathless section over the moorland to the summit was a bit soft, and I was feeling tired. Christmas was catching up with me

. The wind was at it strongest of the day on the summit. Fortunately I was able to get some shelter by the cairn just off the summit and get a bite to eat and put on hat and gloves. I picked up the trodden path I had missed on the way up, and was soon back on an estate track. Cutting a corner of the zigzag brought me back to the main track along the shore of Loch Turret just as it was getting dark. The stroll back to the car in the gathering dusk was pleasant with no need for the headtorch. Back at the carpark I passed someone just setting out - obviously a glutton for punishment.

Cairn just away from the summit: 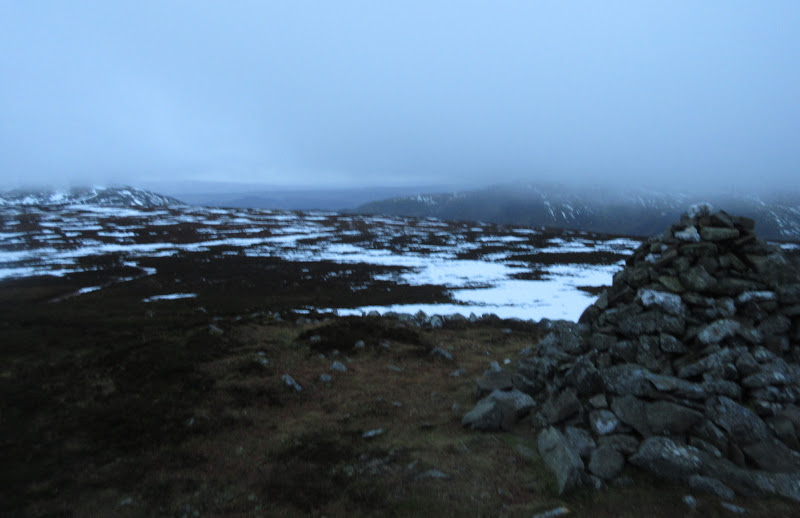 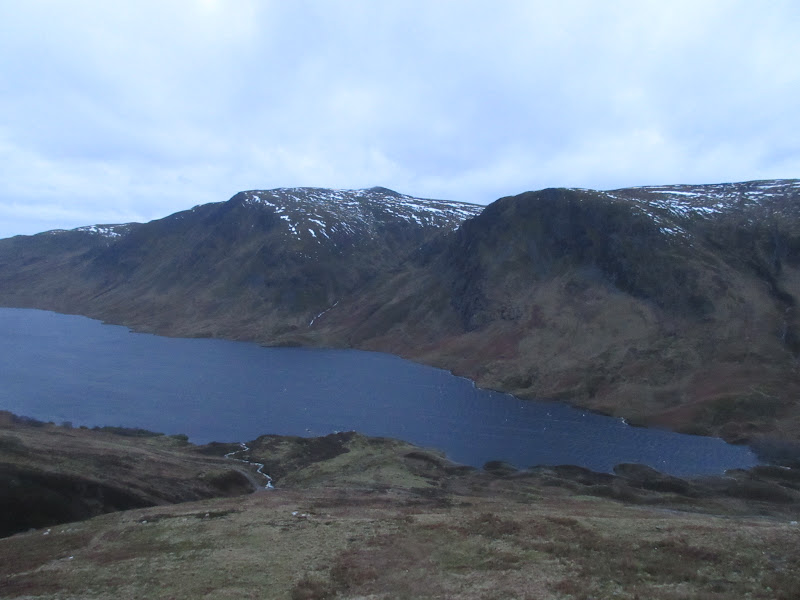 Not likely to trouble my list of top days out in 2015, but an enjoyable enough ending to the year's walking nonetheless.

Re: Last of the year - two walks in Glen Artney and Glen Tur