Phenomenal day on the Irn Beinn

Phenomenal day on the Irn Beinn


Day 2 of a post-New Year hill trip to Newtonmore, and as Storm Frank was still soaking the Southern and Eastern Highlands, heading west along the A86 seemed like the most promising option. So, with two cars available, jackfrost and I picked out this linear walk over the hills on the west side of Glen Roy.

Despite a very strong and cold East wind, we had a grand dry day, and some unexpectedly good views west towards the Ardgour and Moidart Hills. Surprisingly for this year, the only decent snow was on the north slopes of the Grey Corries and the Aonachs.

After discovering just how twisty and exposed the Glen Roy road is, we left one car at the 'radio shack" further up the glen, and drove back to the viewpoint car park and its views of the Parallel Roads. 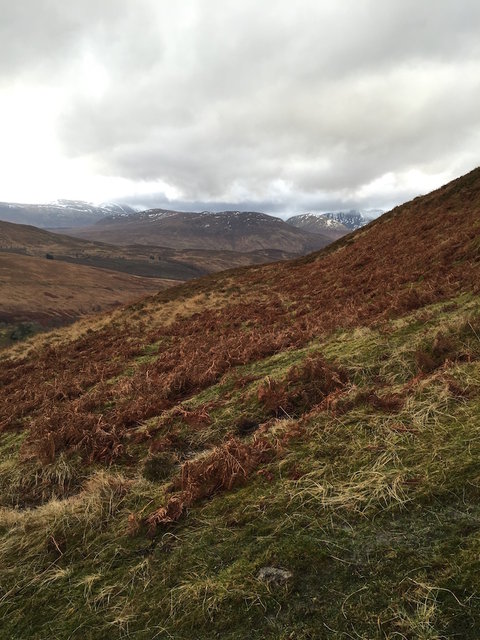 A parallel road, but not a track…

It was a fairly short but very steep blast up a faint path to the flat top of Beinn a'Mhonicag. 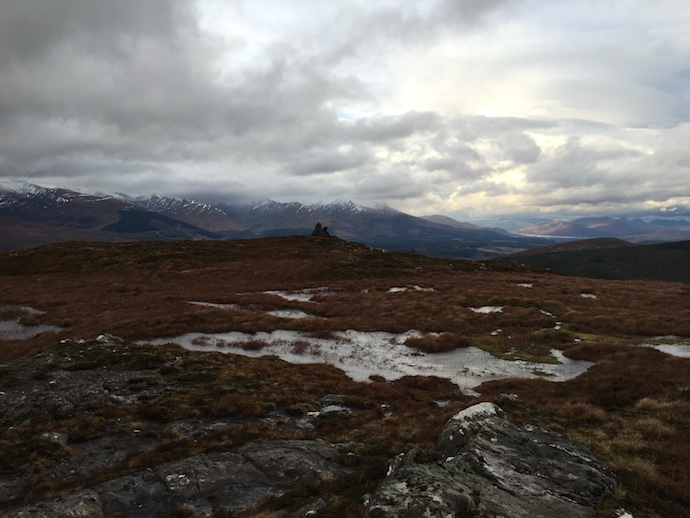 We had to drop around 260m to the col with Leana Mhor, and it wasn't immediately clear where the best place would be to cross the wide bealach, so we slanted almost due north down steep slopes, eventually crossing a track as we started to climb again. 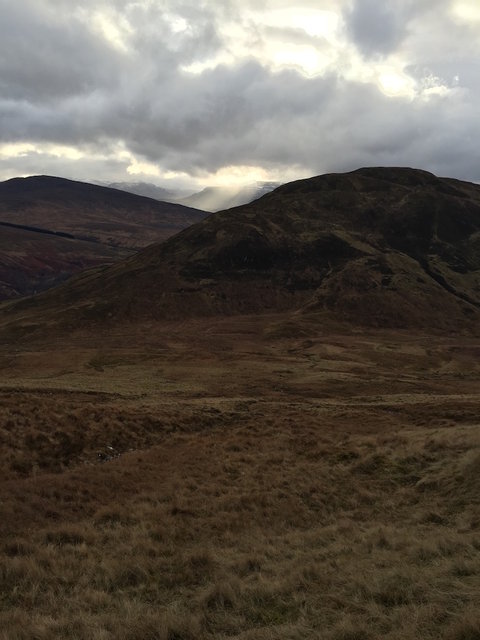 Looking back to Beinn a'Mhonicag from the slopes of Leana Mhor

We continued to climb N to the eastern spur of Leana Mhor, up gentler slopes than Beinn a'Mhonicag. From the spur, we turned NW to reach the flat golf course-esque summit of Leana Mhor, as the impressive looking Loch Lochy Munros made their first appearance of the day. 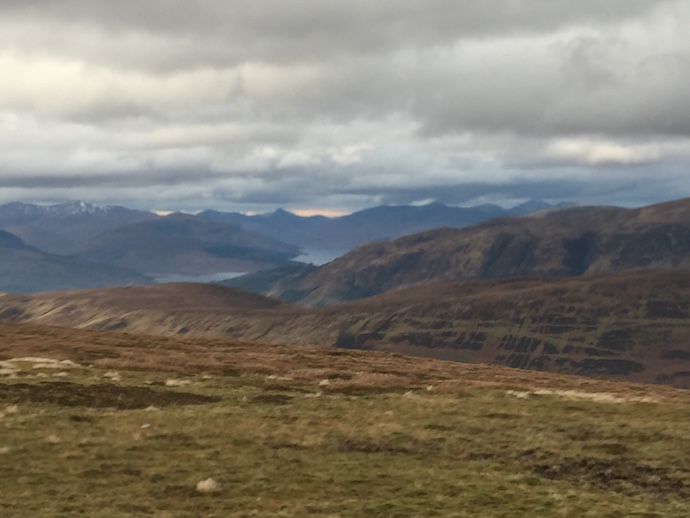 The bealach with Beinn Iaruinn is much higher than the Leana Mhor-Mhonicag one, so the descent was pretty quick, although for a lunch stop we had to shelter in a wee gully to the W to get out of the howling wind. After a quick feed, we struck NE up the slopes of Iaruinn, gaining our first view of the summit cairn across Coire nan Eun. 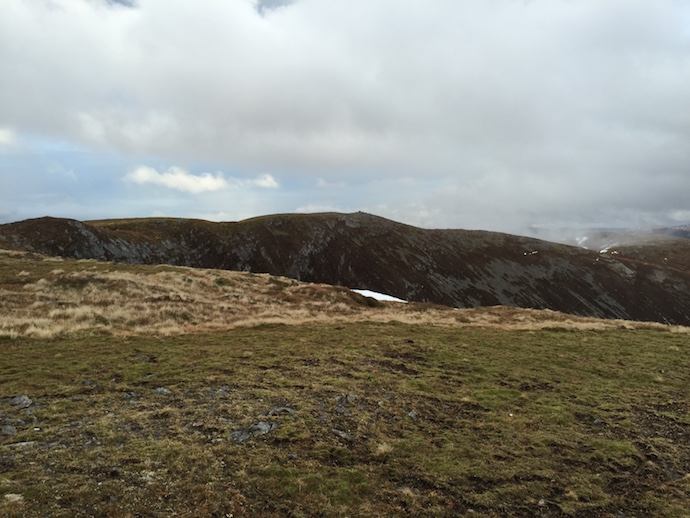 The summit of Beinn Iaruinn across Coire nan Eun

It was a quick walk round the corrie rim to the summit cairn, including a strange few moments when the wind completely dropped. 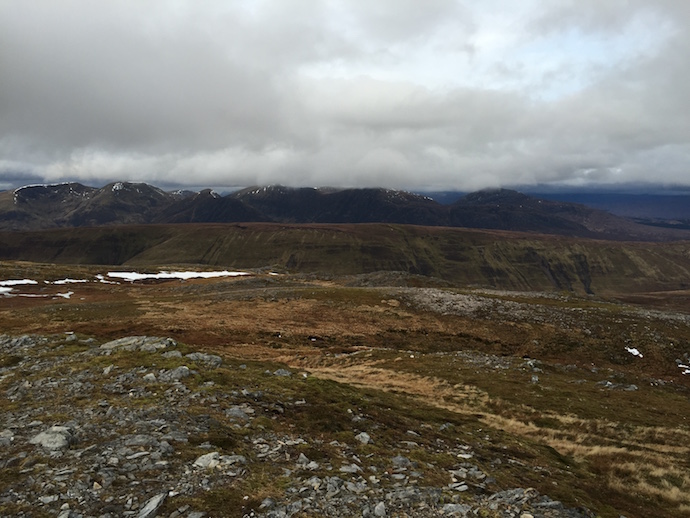 West to the Loch Lochy Munros 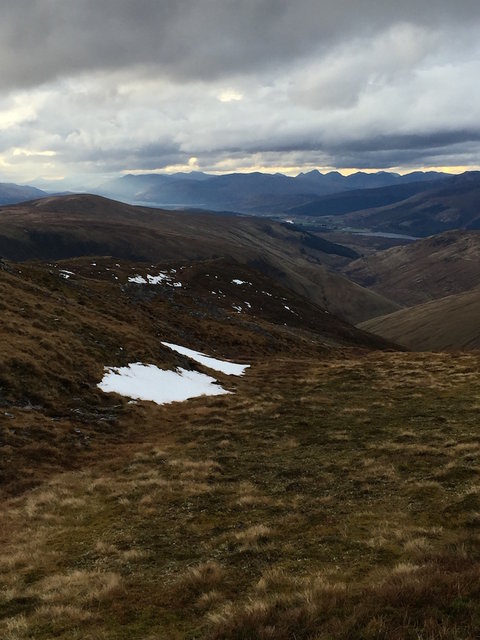 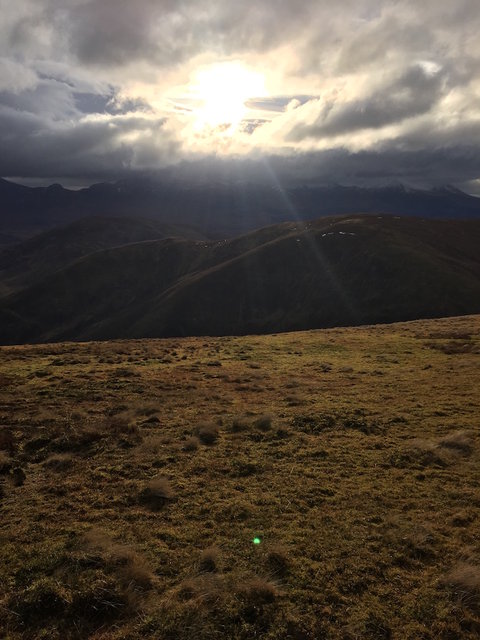 Winter sunlight and the Grey Corries

After a photo stop, we pretty much retraced our steps back to the bealach, and then turned ESE down the steep sided valley back into Glen Roy. 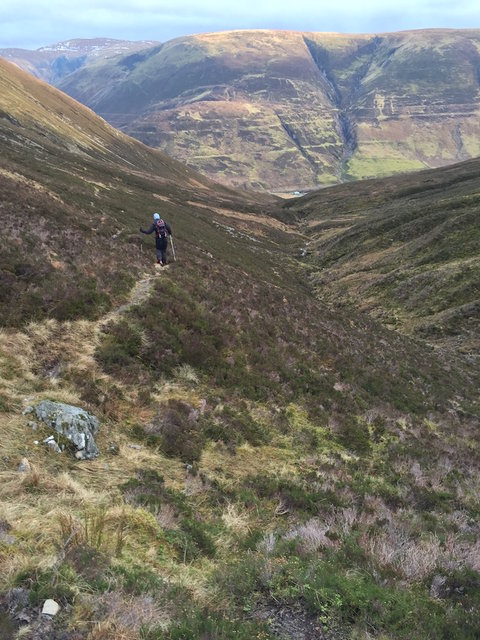 Negotiating our way back down into the glen

We followed a faint path on the N side of the burn, but this tended to traverse rather than descend, before petering out. So with care, we continued to descend until we hit one of the parallel roads (a geologically fascinating feature, but definitely not as track-like as the OS 1:50k map would have you believe!). From there, it was a much more straightforward descent, eventually through a field and back to the car. 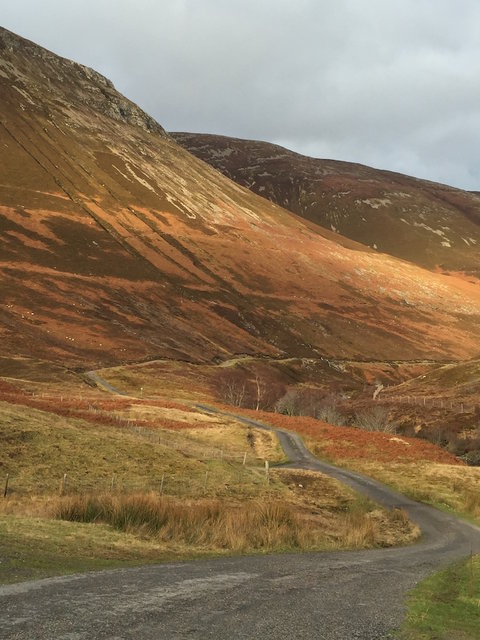 I hadn't been in Glen Roy for over 20 years, but I look forward to going back again a lot sooner. Not sure whether it'll be Carn Dearg, Carn Dearg, or maybe Carn Dearg?