Bambi in the clag on Meall Chuaich

Bambi in the clag on Meall Chuaich


The previous day on the Easains turned out to be a much longer and harder day than expected so an easier Sunday was needed. After pouring over maps, the final result was that we would go for Meall Chuaich; a shorter and easier day and also on the way home

Alarms went off at 6 (a lie in compared to our normal early starts, but still...."5 more minutes?"

) and I reluctantly crawled out of my fabulously warm duvet cocoon. Clothes had been in the drying room overnight which made getting dressed more bearable, so after breakfast (last nights leftover pesto pasta for me, more traditional breakfast porridge for others) and a quick cup of tea we were off.

We overshot the lay by at first so after a classic u-turn on the A9 we parked up and set off down the track. Meall Chuaich (at least some of it) was visible ahead! 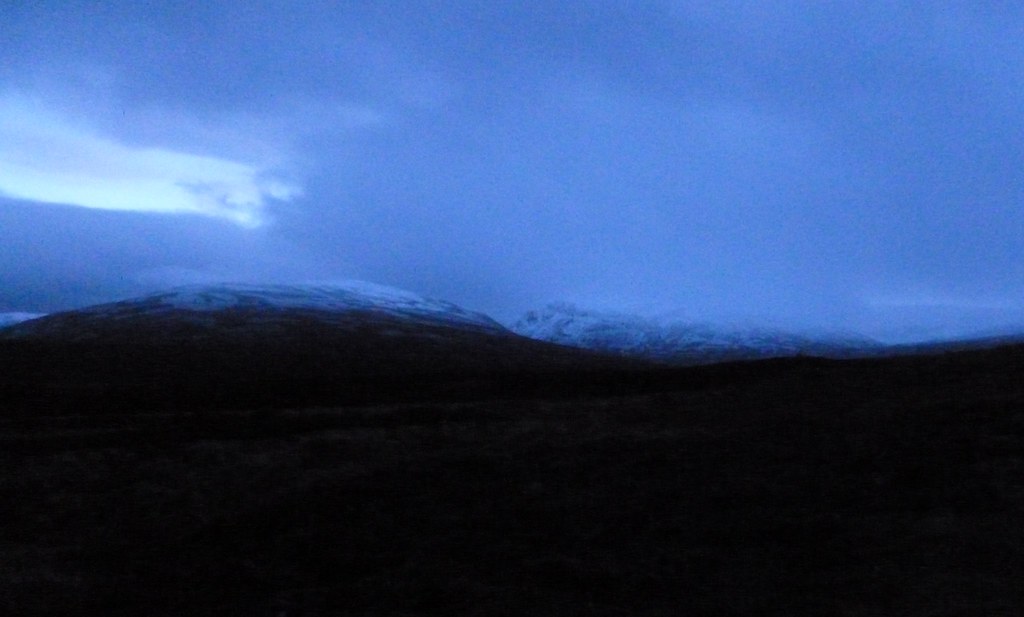 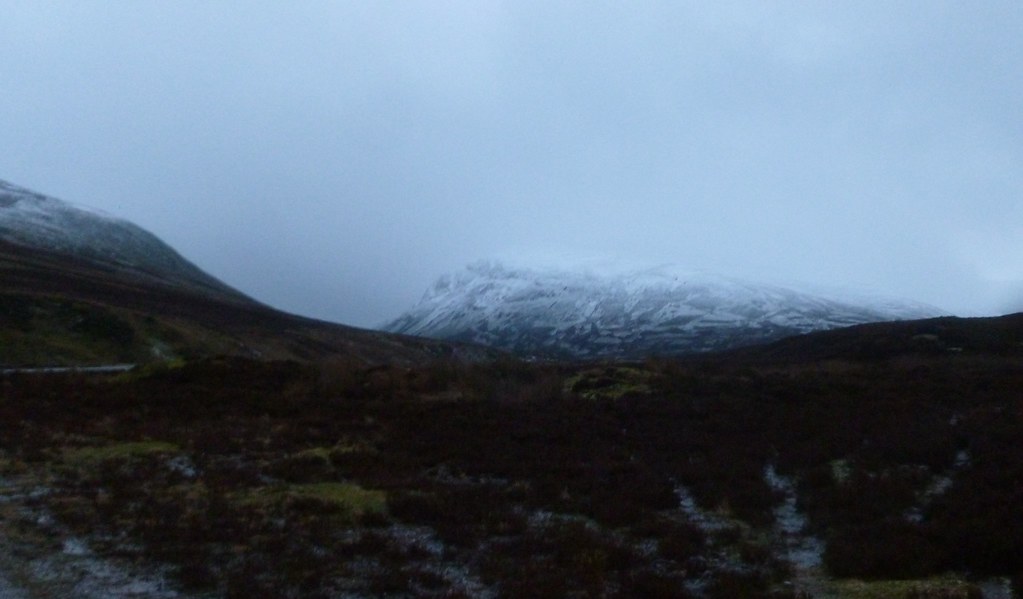 The track was pretty icy so we had to take our time. It wasn't yet properly light and was tricky to tell the difference between water and ice. I never actually fell over but there were a few moments...

It started to rain as we passed the hydro works, so waterproof jackets went on, but left the trousers for now. But it got heavier and we had to stop again. On went the brand new waterproof trousers, at least they would get tested out straight away!

We were both feeling pretty tired so stopped at the hut near the end of the track for some munchies before heading uphill. The rain had actually let off by this point, and we figured the best way for it to stay that way was of course to leave the waterproofs on

Going for the 'flapjack in teeth' look 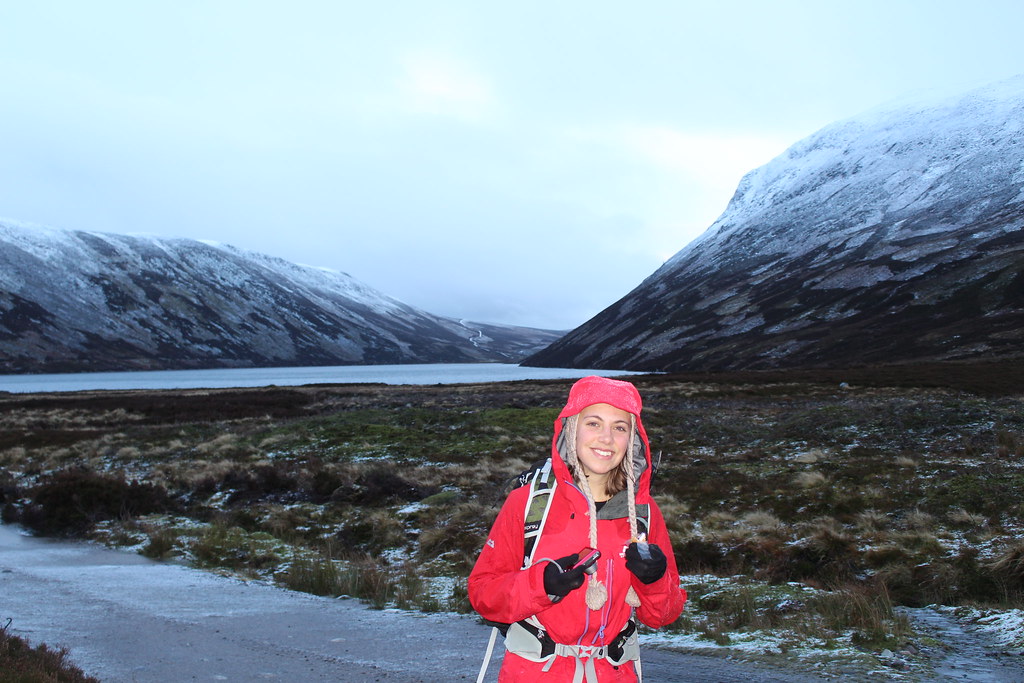 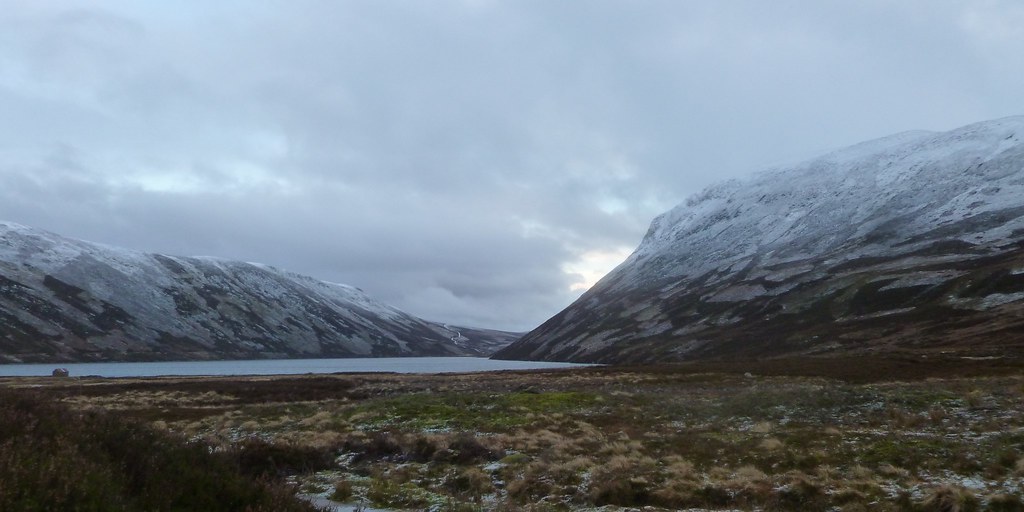 We crossed the wee bridge, left the track and followed a smaller path up the steep side of Meall Chuaich. It was very icy and my sliding around earned me the nickname of 'Bambi' 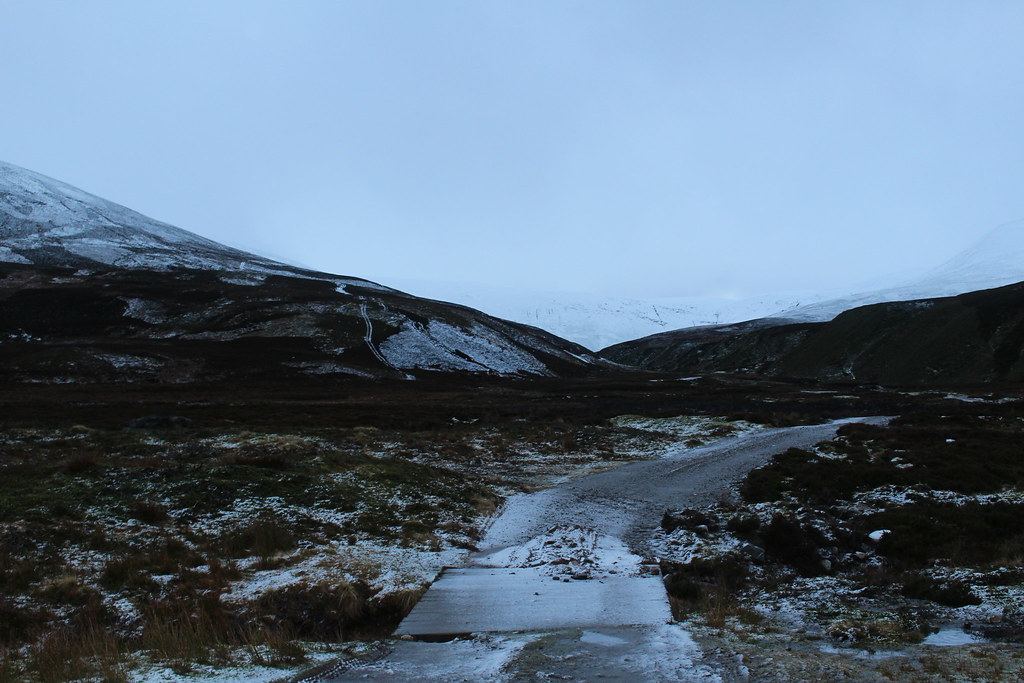 Looking back doon the valley 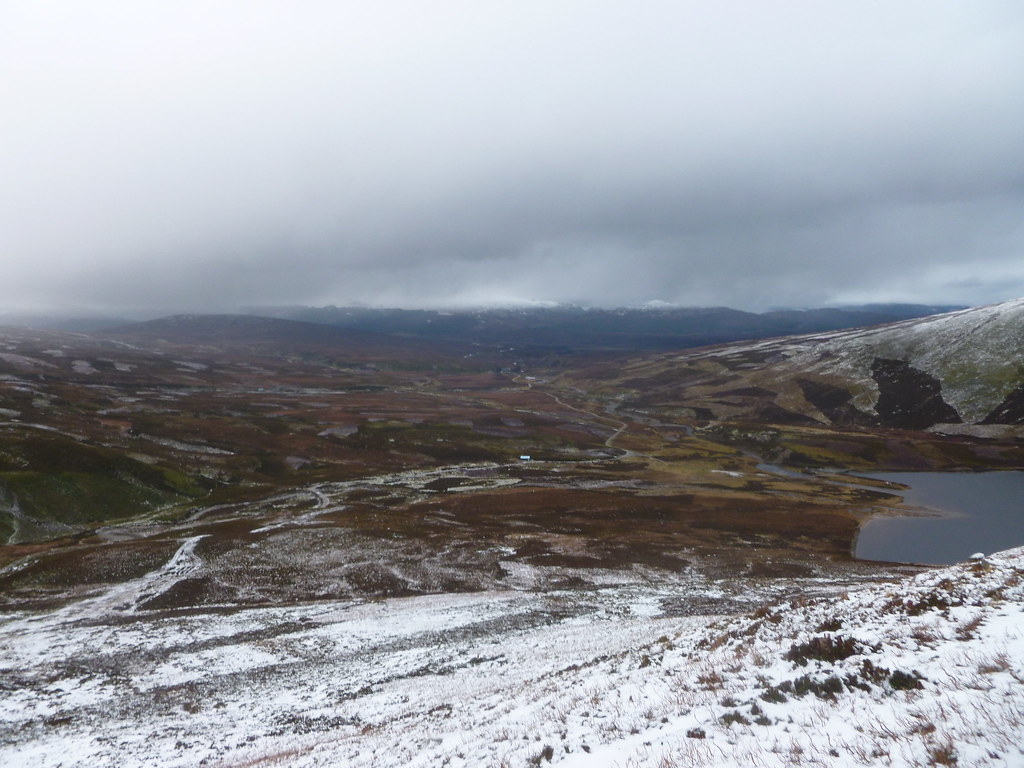 Skies opening up to the right, towards Carn na Caim 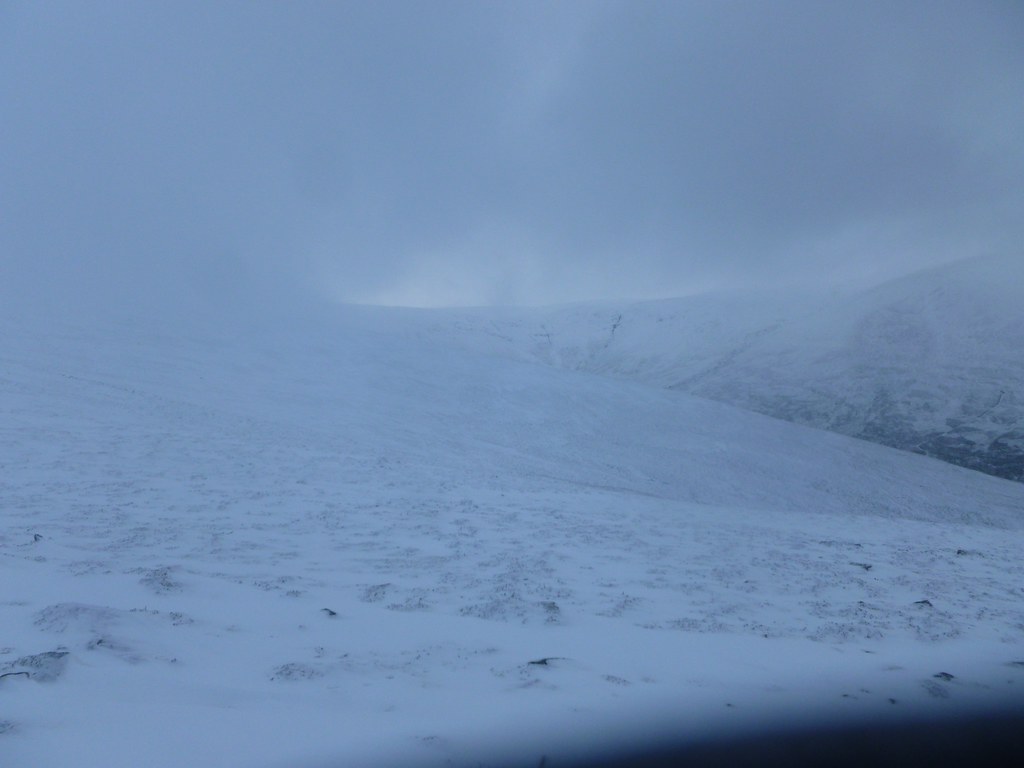 It was hard going and the path wasn't always easy to find, but we still had the view! As we came up onto the ridge we could still see ahead (not the actual top, but since when did anyone ever expect that... 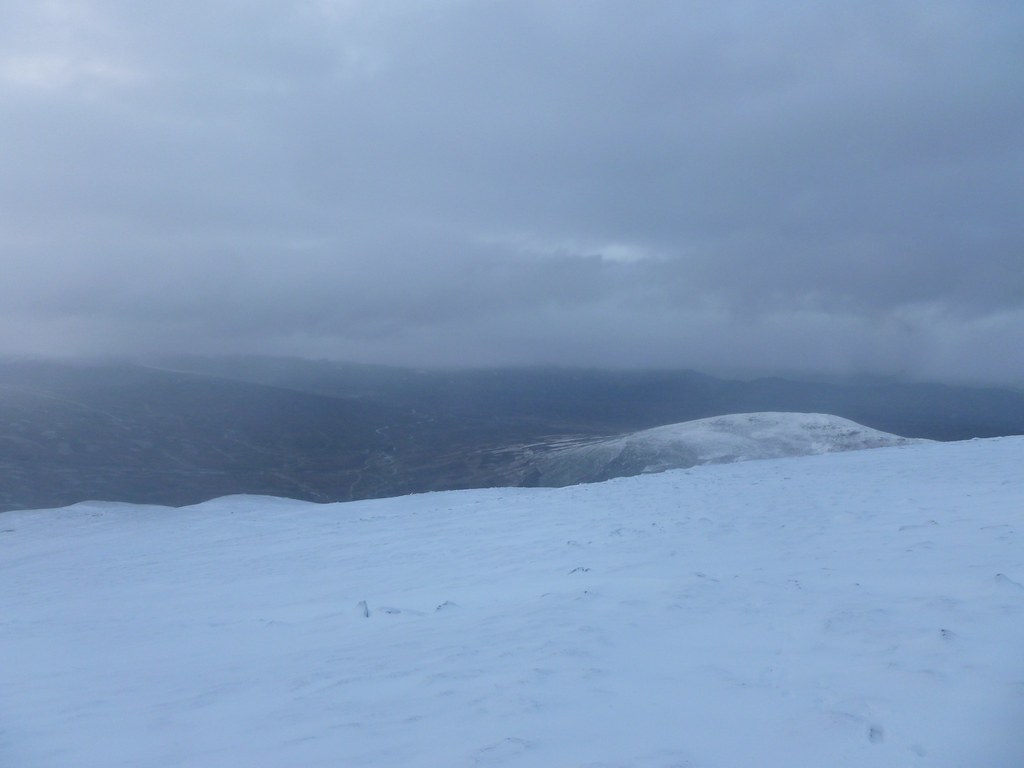 We lost the path under the snow and followed a bearing across a gently sloping plain. The snow was getting deeper and we were going thigh-deep (or knee deep for those less vertically challenged) every couple of steps. It was also rocky so had the additional challenge of not slipping or crashing into them...

Suddenly I spied movement ahead which turned out to be 3 snow rabbits leaping around in the rocks ahead of us. Apparently they change colour in winter to be white! Pretty cool (unless I'm being really gullible as usual.... 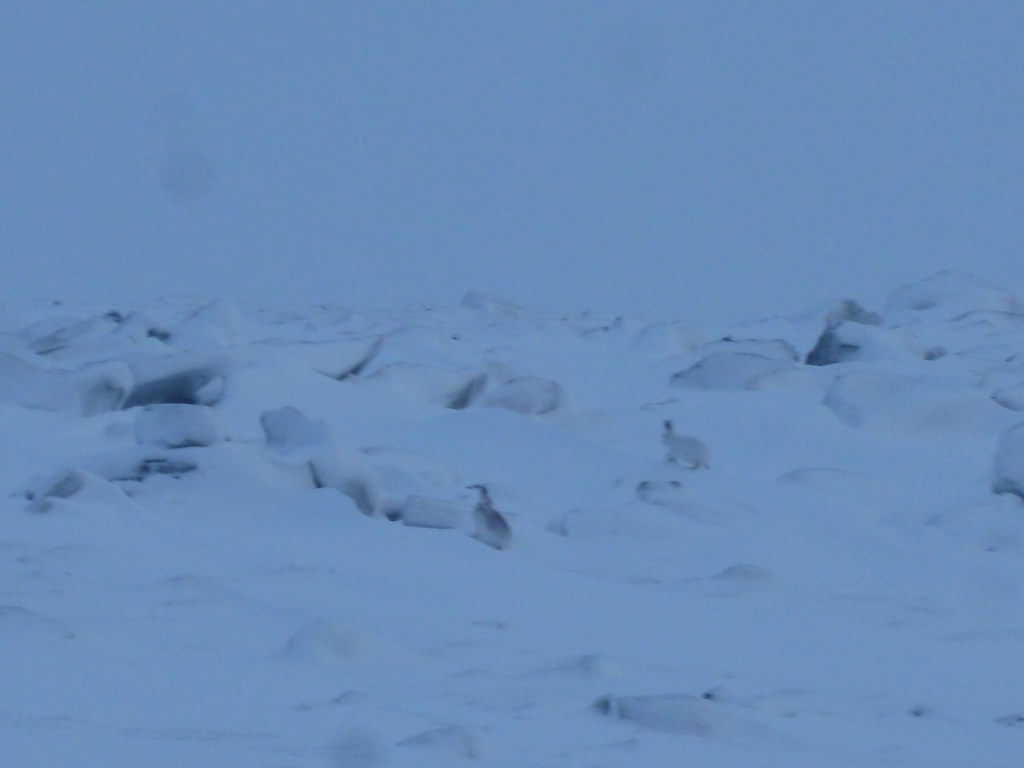 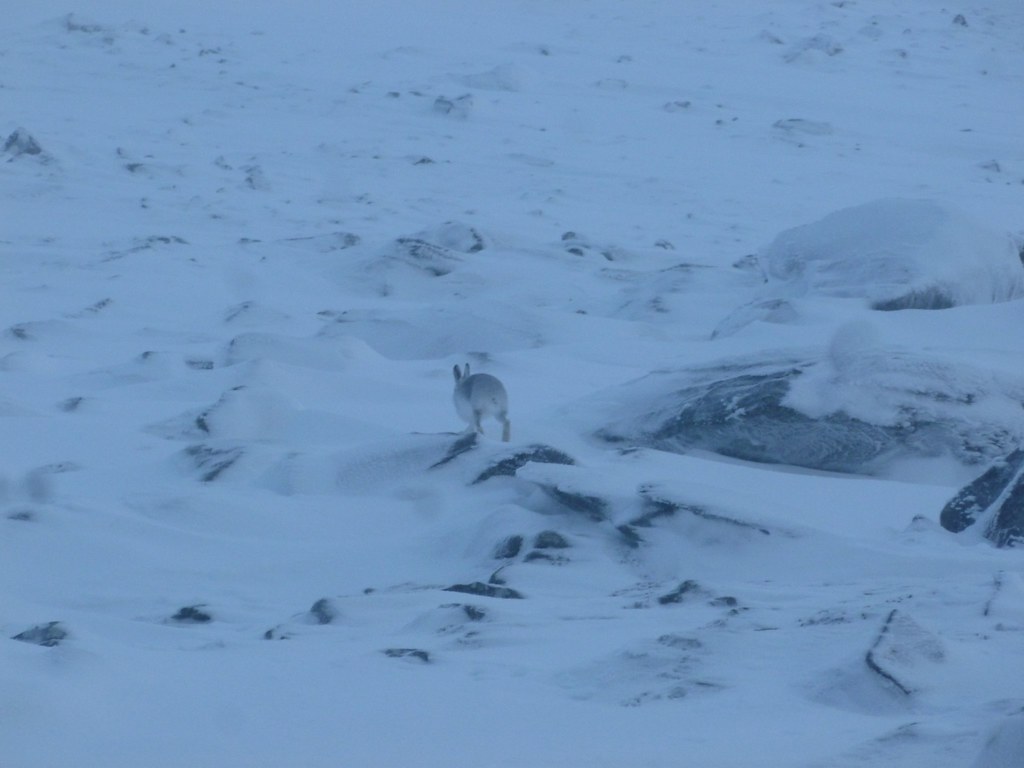 The GPS told us we were at 850m do only 100 to go. It was still clear, the snow was sparkling, the sun was shining and maybe, just maybe we might get a clear summit? 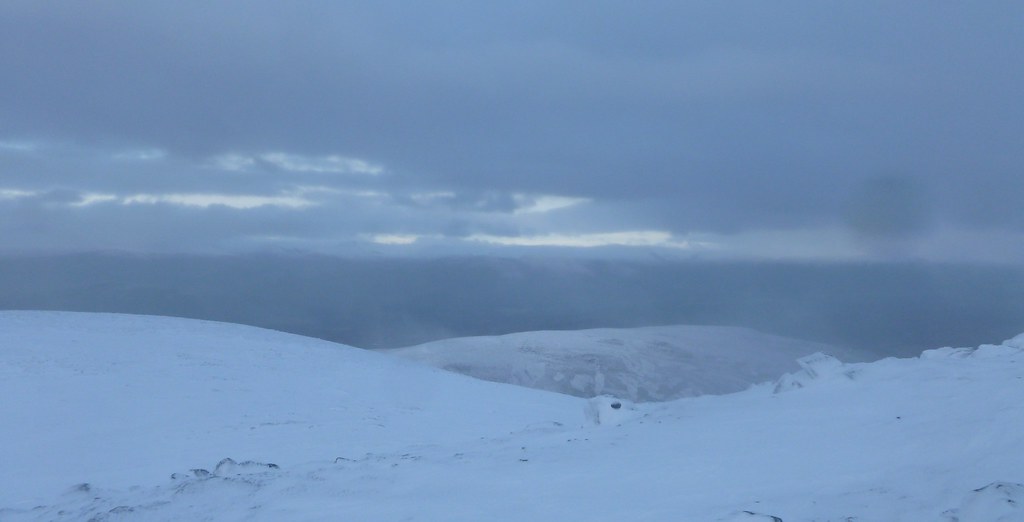 But it wasn't to be.

The clag came in and we trudged on, climbing metre by metre. Finally we were 1m from the summit (apparently) but no sign of a cairn

We knew it was a big one so peered through the gloom, when eventually I saw what looked like some rocks. We headed towards it and, lo and behold, the worlds biggest cairn! It was all covered in snow and ice (very well camouflaged) so I set about climbing it (obviously).

On top of the world! 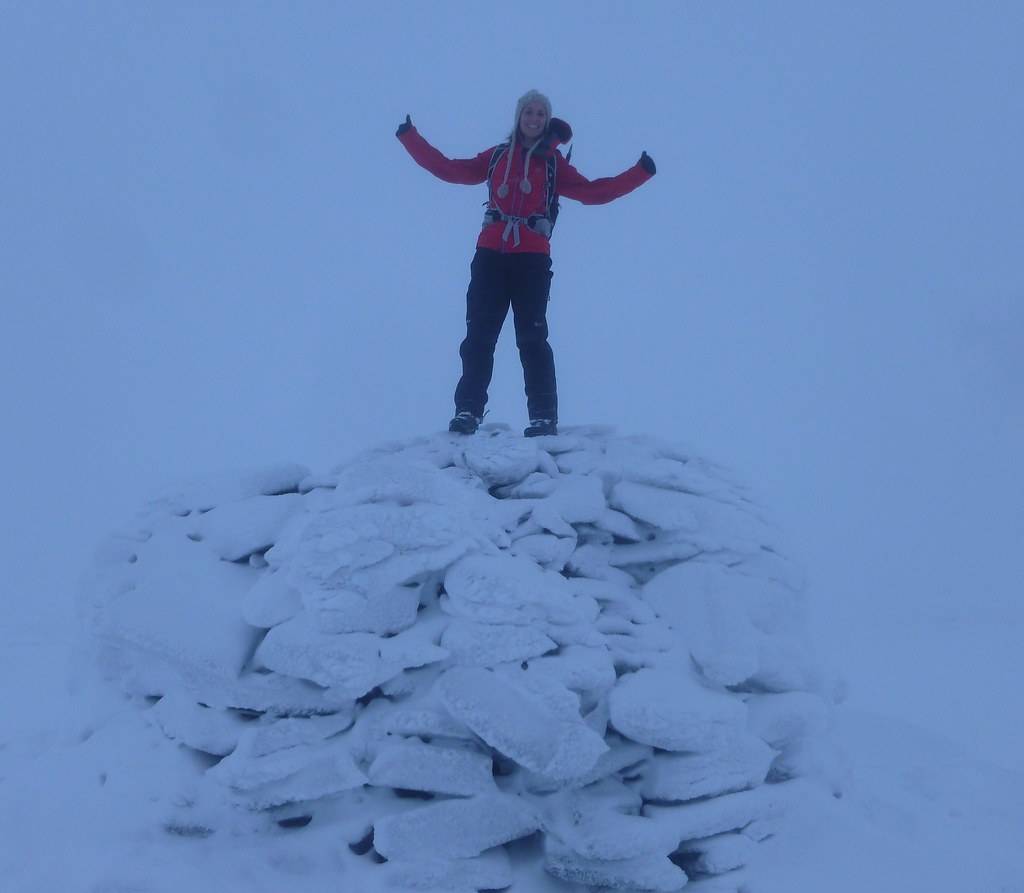 The views were very similar to the day before sadly, although it was a lot less cold and windy. No point hanging around, so off we went, following our footprints back until we were out of the clag.

Oot the clag at last! 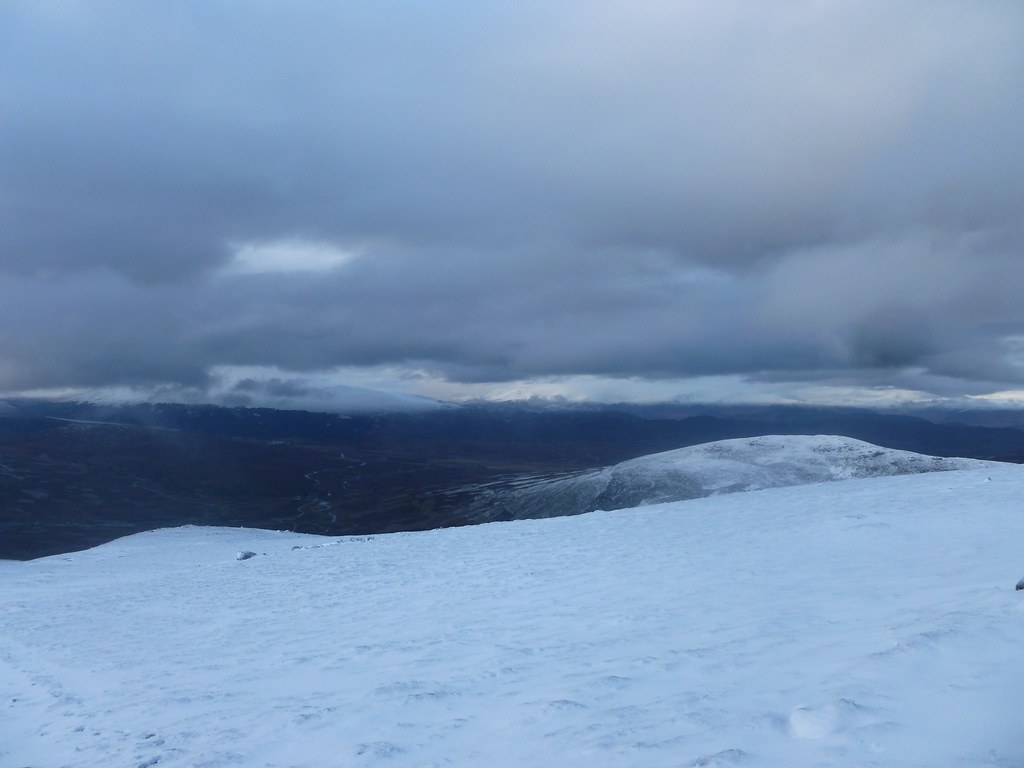 As we approached the last bit of ascent we met a few people on their way up. After stopping briefly for a chat we cracked on. Down the bottom some of the ice had melted but it wasn't too much of a bog trot

Quick march back along the track (much less icy now, but much more wet) got us back to the car just before 1. Looking back, the summit was clear! Typical. But we'd had a much better day than the forecast had led us to expect 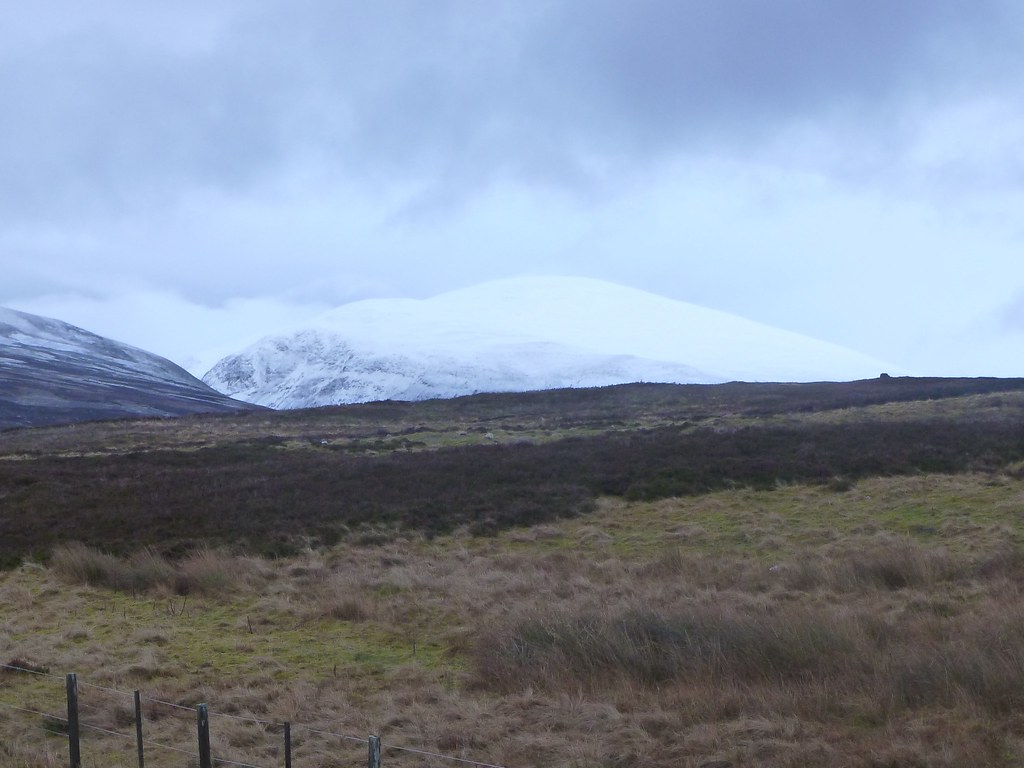 Heading off back down the road munching on sandwiches, brownies and melted mini boost bites. (Melted?! Yes, we'd accidentally left them sat on the car heater

) A feast for kings!

Nice one Bambi - it wasnt for your sliding that I bestowed that name. It was for those light, wee footprints that you make. Somehow I would sink about 10-30cm deeper! (Note to self: Less whisky and mince pies - next christmas.
Munro bagging and 5pm flights to London - not recommended!

Nice one, enjoyed that

Shame you didn't get the views from the summit, personally I think Meall Chuaich is the best hill in the area

Many congrats Hugh, you are certainly pretty active (for a southerner)