It's been a while since my last walk,

, the weather last year was just pants on my rest days, hopefully it won't be repeated this year. With such a long break I looked for an easy Munro to kick start 2016 and with the weather forecast looking promising for Perthshire Schiehallion was my best bet.

Arrived a wee bit later than planned due to traffic but was heading up the start of the track by 09:15am ,only another couple were further up the trail. Shiehallion from near the car park

clear path from the car park

It was a relaxed pace and with frozen ground on the hillside it didn't take long to reach the snow line.

With the couple in front breaking trail and the snow firm ,it was a straight forward assent to the summit arriving about 11:40am. . I met the couple at the top but they only stayed briefly as the wind chill encouraged them to head back down to a lower point to have their break, which gave me the top to myself. superb views from the summit After some photo's I tucked myself behind the cairn and enjoyed the views and my lunch, I'd brought plenty of water but my pipe had frozen, must come up with a better plan.. I'd spent about 30mins at the top so it was now time to head down , the gentle slopes made the decent easy and my axe and crampons were never taken out of my rucksack today, again more fab views on the way down. 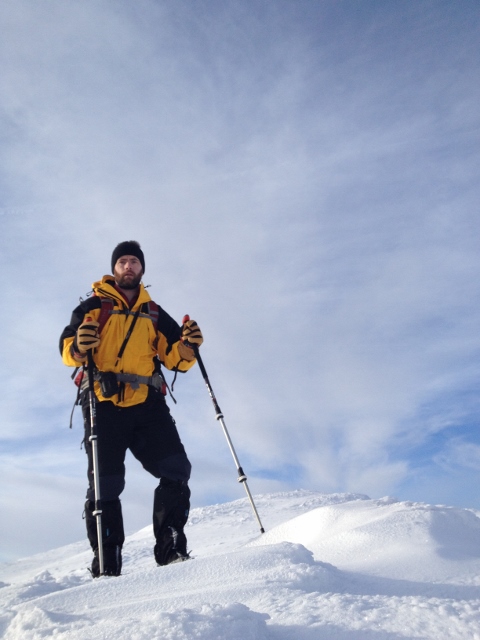 phone on the ground selfie...

It really didn't take long to get down , even with talking to the again couple later on at the "stone view point" I was back at the car by 13:40pm, happy with a straight forward day on the hill, just the chore of driving back....

Lucky you getting the views!
We went up on the 16th, over cast, cloudy, and then as soon as we reached the summit around noon, the snow started. Made an interesting walk back down when the snow is whipping horizontally across your face!

Nice one, some lovely views from the summit. Did you blow back the fluid from the platypus pipe back into the bag, that sometimes helps when there is no fluid in the pipe section

Cracking day for it and nice pics, Andy.

Re-Platypus: Try sticking the tube down your back, i.e. between you and your pack, often provides enough warmth to prevent it freezing.

Amazing pictures! Looks like you had a good day for this.

I've made a promise that I'll visit on a good day, and this encourages me to keep to it!

Great pictures of this hill in its winter coat and of the views from the summit.

Ideal winter day in the mountains