Nice easy walk around Lochore with the oldie dog!

Nice easy walk around Lochore with the oldie dog!


Day off today and had some tough choices to make as to what to do with my day! Millie, my main walking companion, is currently resting up with a bad leg so I had to decide whether I would take just Moss, go for something Fly-friendly (Fly is my oldie dog and has arthritis and had surgery on a slipped disc in her neck in September), or go and do something on my own! I decided two dogs is better than one and I didn't fancy going anywhere by myself, so I found the Lochore walk on the website and that was our walk chosen. My two walking companions for today, Fly (front) and Moss (back)

We found it easy enough following the SatNav, parked up the car, returned to the car because I had only three poop bags so I picked up another load of those (though I only needed one bag as both dogs went only once and at the same time, can guarantee though if I hadn't gone back they'd been leaving piles all over the place!). Poop bag pocket well filled, we set off. The paths are wide and tarmac or another solid surface with no steps or anything Fly would find challenging, all well-maintained too if a bit flooded in parts. The water in the loch was obviously higher than usual as the disabled fishing spots were a little bit under water! There were however lots of puddles and some parts of the path I just had to hope the puddle didn't get too deep for my boots! Fortunately my feet stayed dry and we followed the marked route around the loch (be warned, the blue markers are faded on some posts as are some of the other colours!). There were a few potential "diversions" that looked interesting, but we stuck to our route without any detours as I had to pick up dog food in Glenrothes before 4pm and I didn't want to end up adding too much more to the route - Fly can do an hour and a half at the most. The scenery was pleasant enough a we walked around, the dogs running about and I watched the loch for birds. There wasn't anything particularly interesting out there but I like to see the goldeneye and "tufties" There was a swan that I watched for a short while, but only a short while because he took a bit of offence to us being there, as swans sometimes do. Or perhaps it was because we were there and had no food! No food, move on! Neither of the dogs paid any particular attention to the swan and after getting a few photos we moved on. 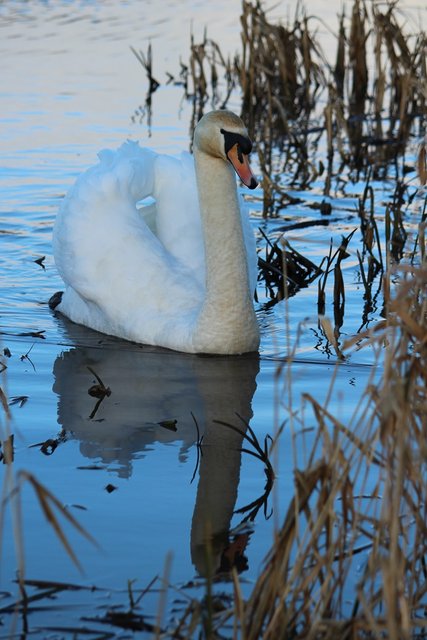 We only saw a few other people on the route, so we were able to enjoy some peace as we wandered around (or in the dogs case, ran back and forth along the path and in the case of Moss, jumped in as many puddles as was possible). There were fences and gates, some of which didn't do much to stop Moss as she found a way through several of them! Fly though waited for me to open the gates, and got a bit confused because she was waiting at the wrong side for one of the gates to open lol It didn't seem to take that long to do the walk (or maybe I'm just used to longer walks when I go out), but when I got back to the car I realised we must have been out nearly an hour and a half! Fly could just manage to jump into the car, so it was just as well we didn't take any detours as that would have probably made the walk a bit too much for her, but she enjoyed her own little adventure to somewhere different. A very pleasant walk, one I'll keep in mind when going to Glenrothes for the dogs food if I decide to take all three dogs with me.