We decided on Ard Crags and Knott Rigg as we have walked the bigger hills on either side of them and thought they might be a bit sheltered from the wind - also after all the rain we wanted to see the waterfall at Newlands Hause. We weren't sure how far down the road from Braithwaite to Buttermere we could drive as we doubted if all the bridges on there had survived the floods. As it happens the first bridge, near Rowling End is ok, but the next one near the old quarry is damaged and closed. So - road closed - but we were able to park in the old quarry and get straight onto the path by Rigg Beck, which was the original plan anyway so all good!

The ground was pretty wet and we saw no-one else - a curious sheep obviously wondered why we were there. A little higher up the ridge it was quite windy but great views behind towards Derwent Water and the hills behind. 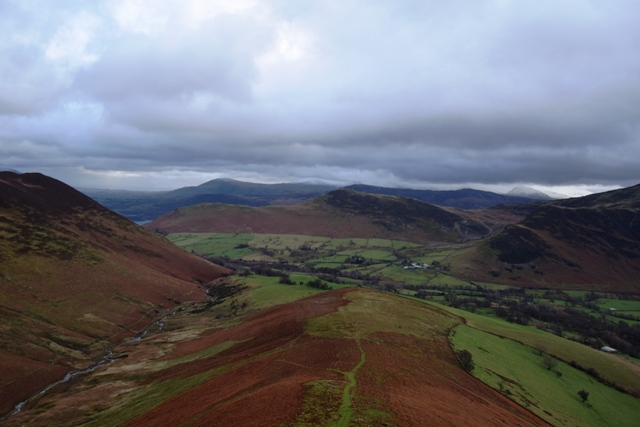 Looking ahead towards Robinson and Newlands Hause. Ahead the ridge - we will be walking along to the end of this. A quick look down to Keskadale Farm. We walked back along the road there later and could see the level the water had been at during the storms. Also some quite large landslips along the roadside. Looking back to where we had walked from. It was quite windy on here. I kept blowing over although I seemed to be the only one doing that for some reason. It's an easy walk for some good views and a good one for spotting hills all around you that you've walked on. One of the reasons for picking this route was the view of the waterfall - it was pretty impressive but the photo doesn't really do it justice. Once we'd reached the road I remembered I had a Double Decker in my rucksack - took it out to eat it and it was frozen hard as rock. Took me the whole length of the road back to to car to gnaw my way through it.

Looking back along the road as we walked to the car. The sheep had just been fed and were looking colourful today. When we got back to the damaged bridge we were on the wrong side of the barriers so had to wade through the water of Rigg Beck to get back to the car. There are good views from here for a fairly quick walk but surprisingly windy as it seems to be sheltered by bigger hills on either side.

Great stuff MiS, the flood damage is a bit of a pain but glad you got around it and made some great shots of the hills looking more like spring than winter. Shame you ended up with a wade to finish but they are always better than a wade at the start