Our plan for this weekend had been to go to Mull. It was all planned out - to get the last ferry over on Saturday night and walk on Sunday. Then Storm Gertrude happened. It still looked like the winds would drop in time, and we managed to book onto the last ferry and set out.

Approaching Crianlarich, it turned out that there was maybe something we hadn't planned for....it was snowing pretty heavily. We were warned of the snow gates being closed at Tyndrum on A82, but no mention of A85 and we knew it was a lower road so thought (hoped) it would be OK

On arriving at Tyndrum we discovered blue flashing lights and all sorts of exciting things, but also the news that both roads were closed.

After chatting to a few people in the very snowy Green Welly car park, we figured they would have the roads open fairly fast, but sadly not quickly enough for us to get to Oban in time for the ferry so an alternative plan was needed. Embracing the idea of being stranded in Tyndrum, we found somewhere to stay, had a snowball fight and had some dinner. Steak pie and burgers were most welcome

As we were finishing off, the roads began to reopen. 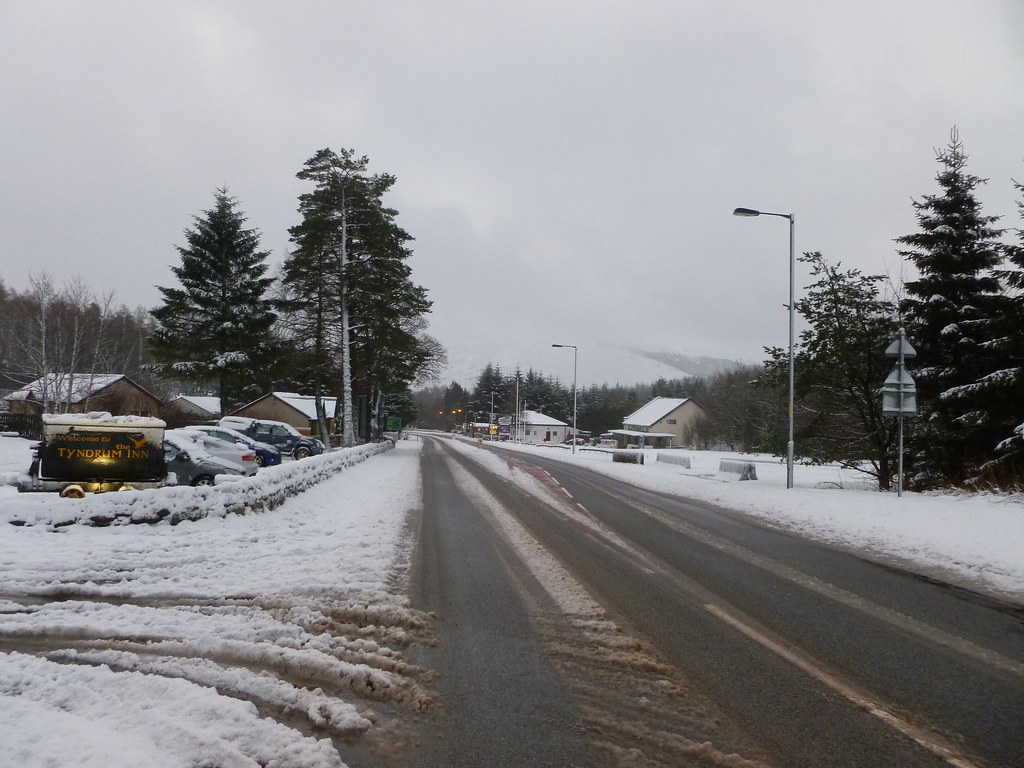 The next morning, after an excellent full Scottish breakfast (being stranded wasn't so bad after all

) we headed down the A85 to Castles Farm just past Dalmally, our start point for the day. We missed it the first time as there are a lot of hydro works going on there so had to backtrack and found a friendly farmer who told us we could park inside his gate 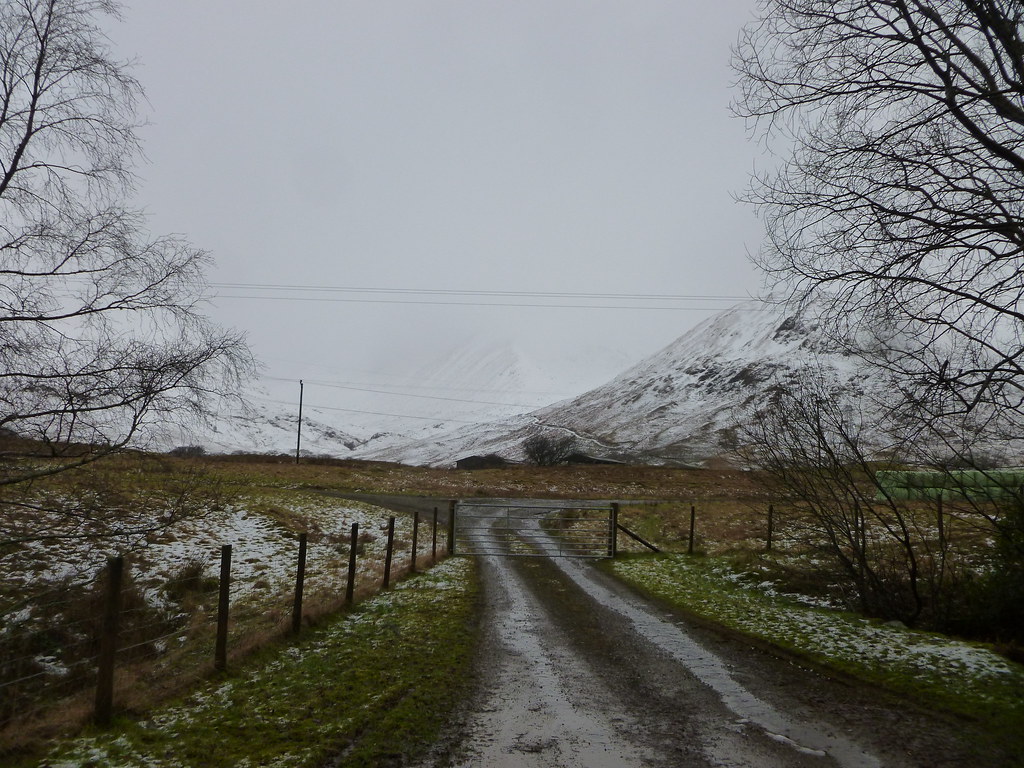 Waterproof jackets were straight on as it was raining and I was trying out my new supposedly waterproof hat.

Looking up the track 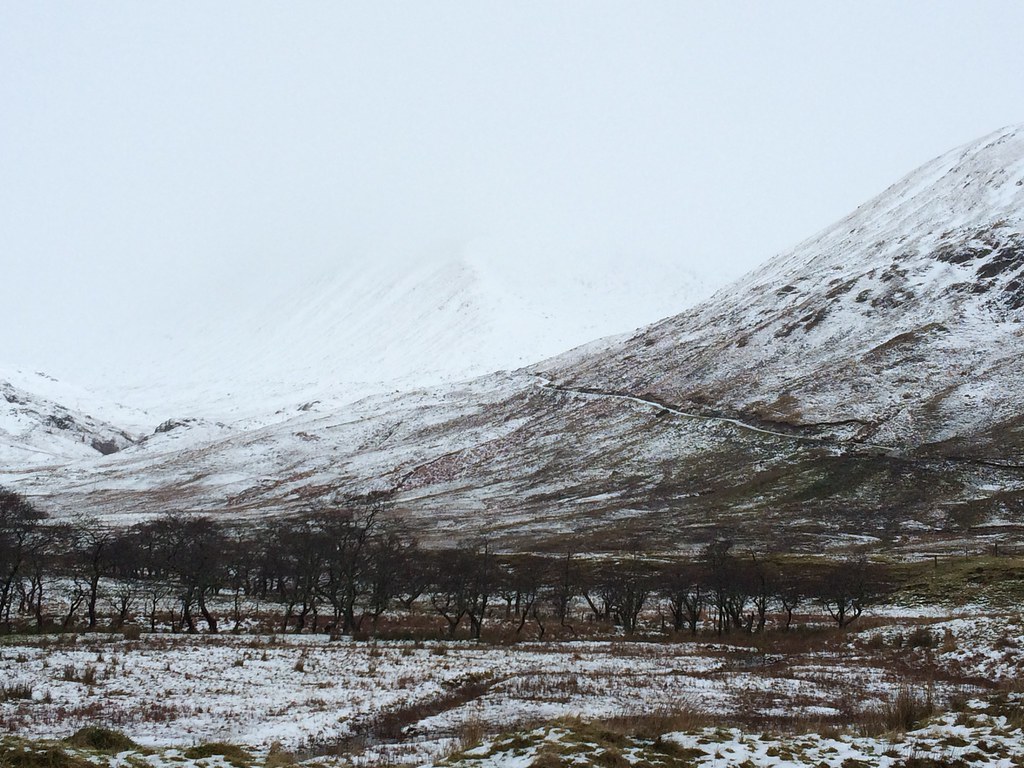 and we gave them a wide berth, but afterwards seemed fairly harmless as we walked in between them. 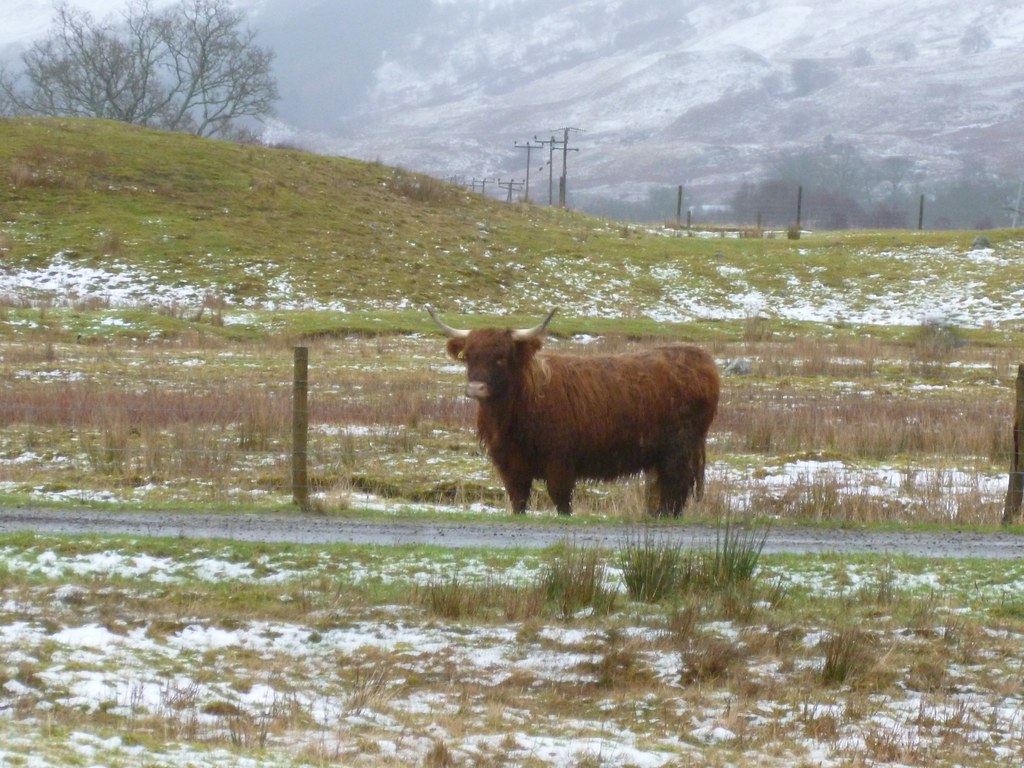 Although I remember hearing that actually the best thing is to stare them down, because if you run then they'll give chase. But I'm not sure if I'd be brave enough to try that should it arise

Fortunately we didn't have to find out, and other than the large amount of sloppy cow pat around, they were no problem at all.

Continuing up the track, it became sleeper and snowier and was hard work! But the rain had stopped and we were getting some views ahead. 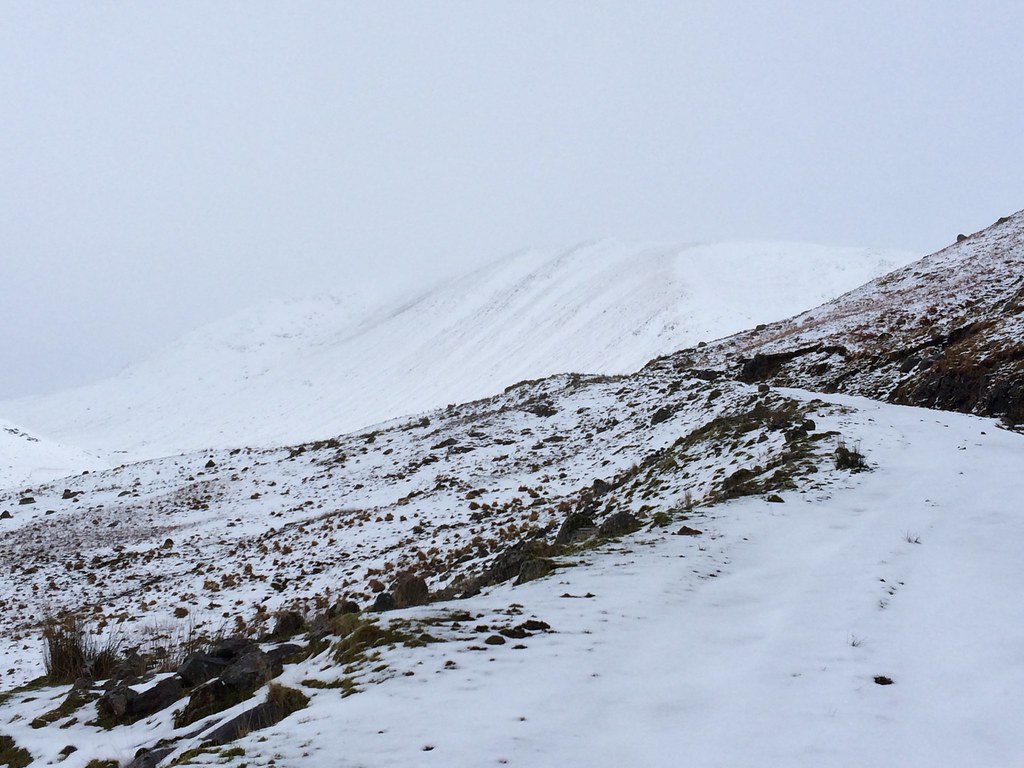 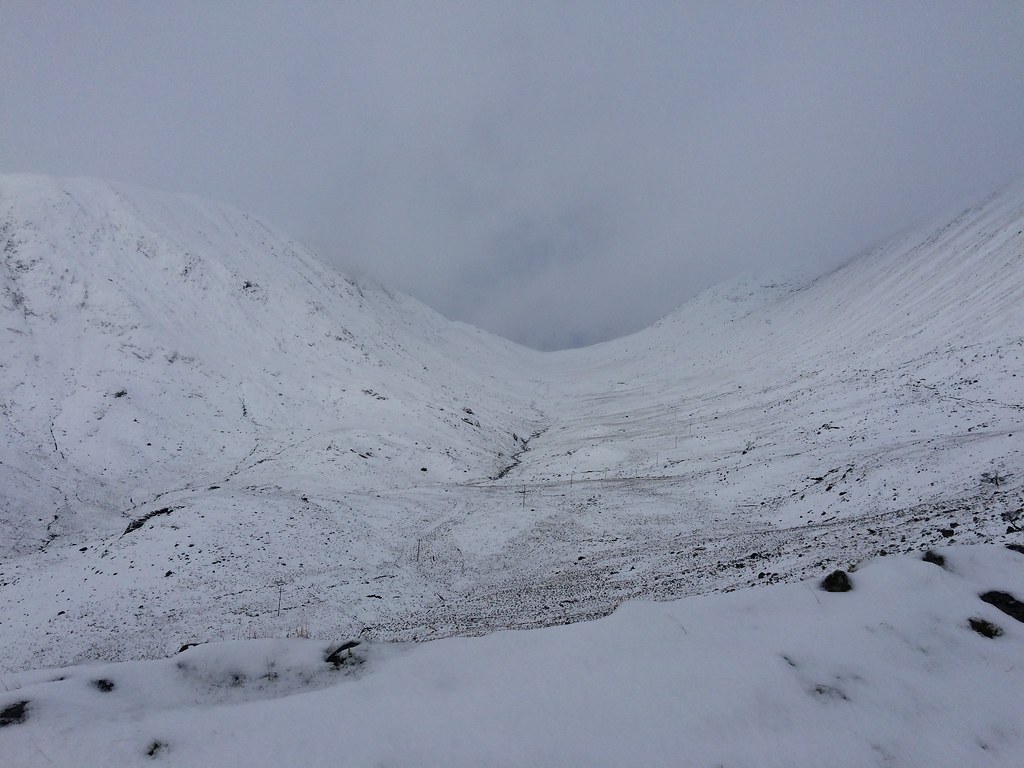 I found big rock to stand on 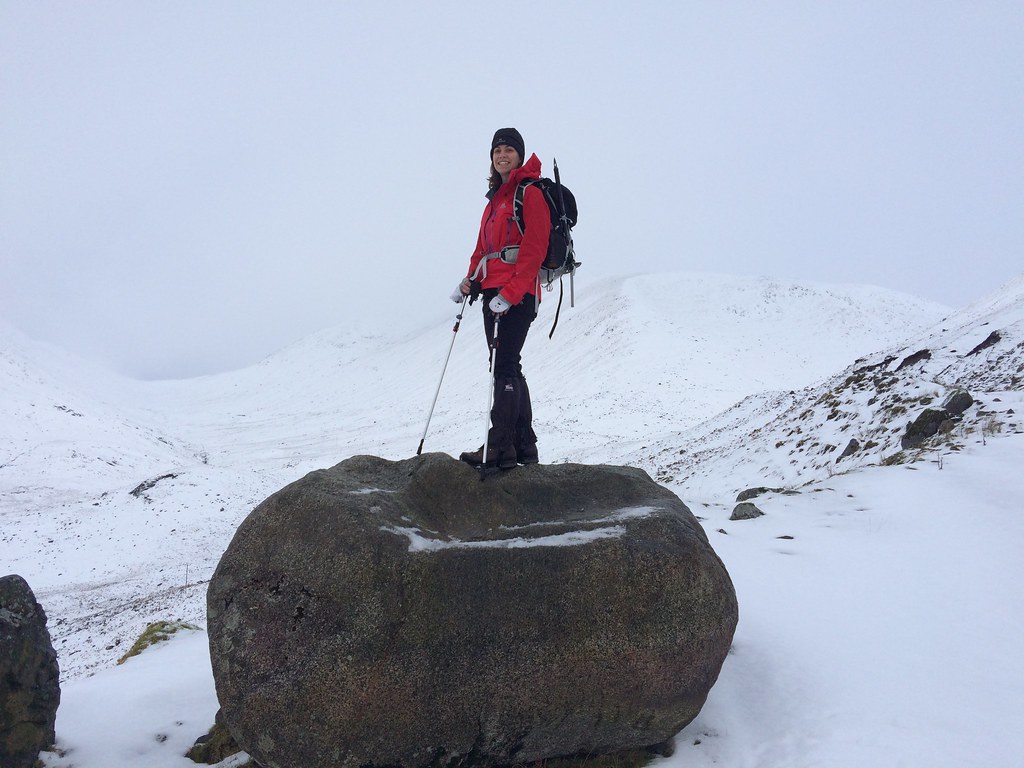 My back was still giving me a bit of grief from the previous weekends excursion so I was trying out walking poles which I thought might help. Not sure I'll be a convert but they definitely took a bit of pressure off my back and stopped me bending over so much, so the decision to take them was good.

Me walking up the track 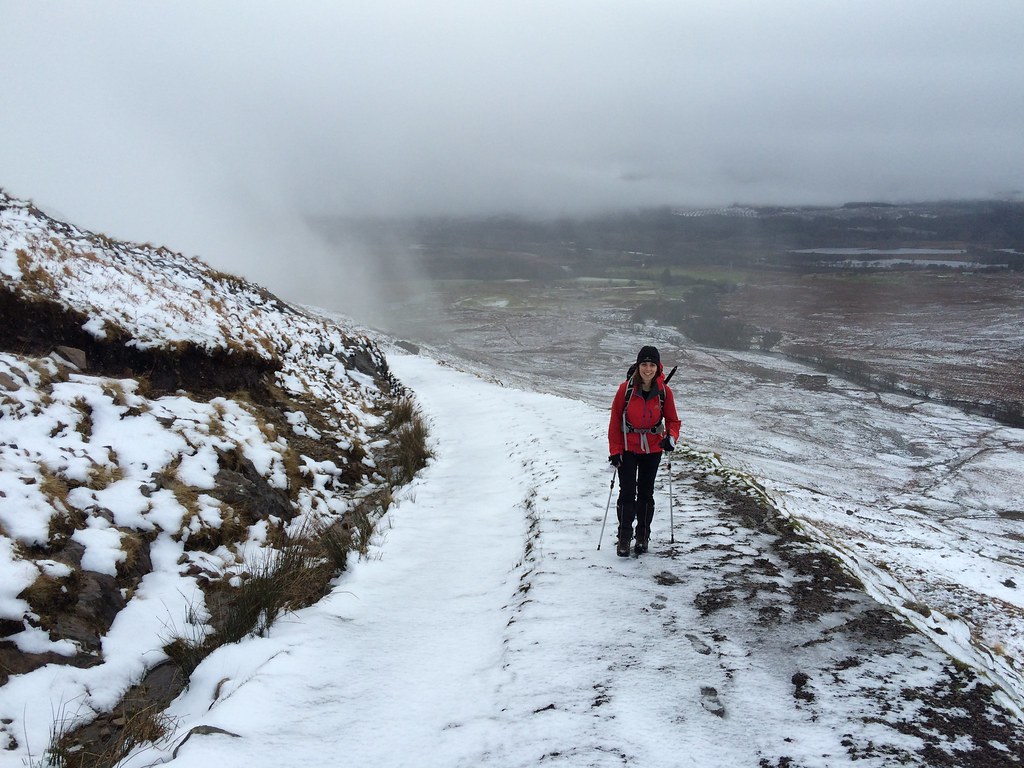 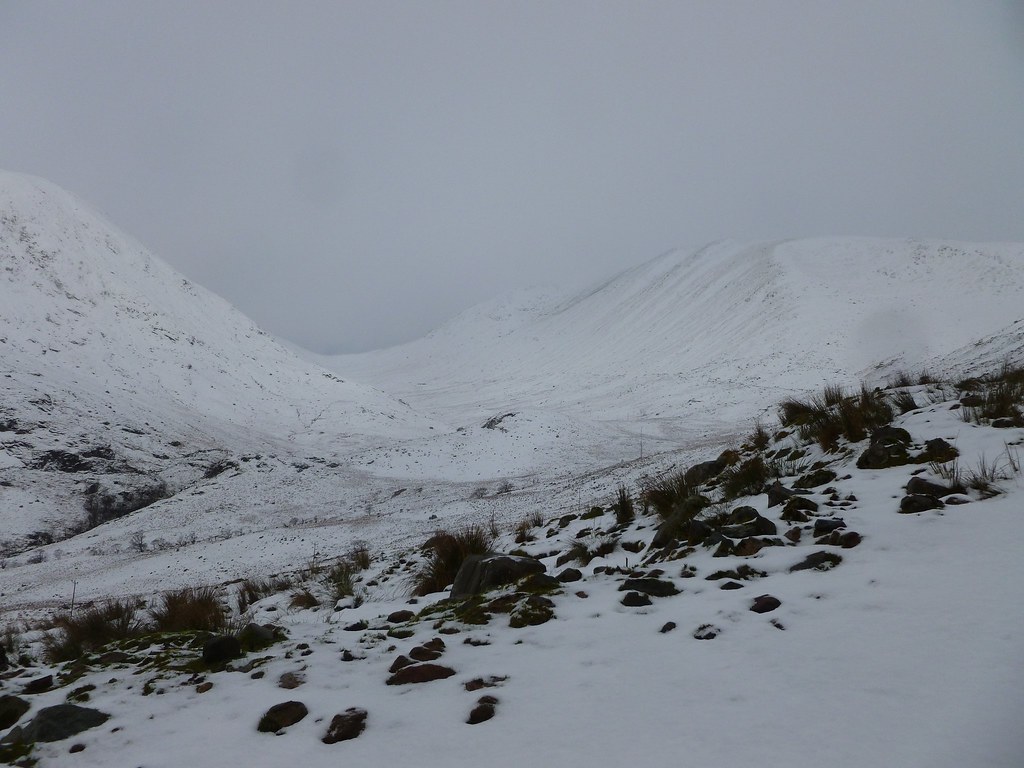 Approaching the bridge we were stared down by this guy....reminded me of the black knight from Monty Python. "None shall pass!" 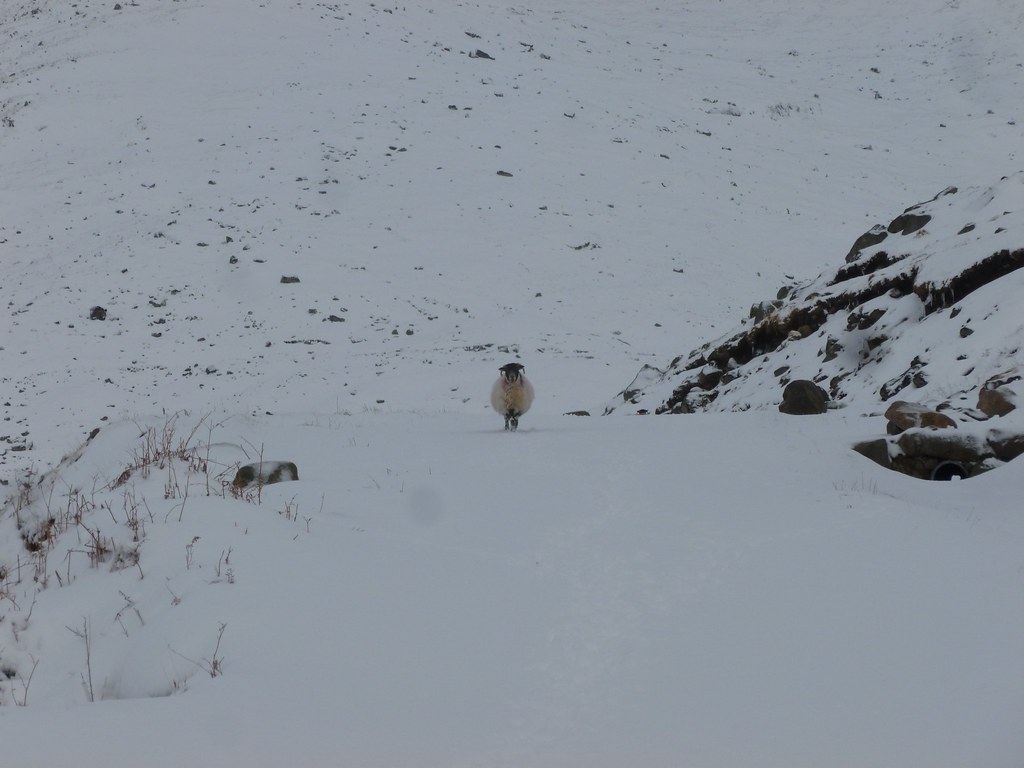 After an hour and a half we finally reached the Mhollie Bridge for a quick refuel below the start of the upward slog. It was here that we started making a mental note of possible exit or escape routes down from the bealach, should we need them

Gorgeous views back the way 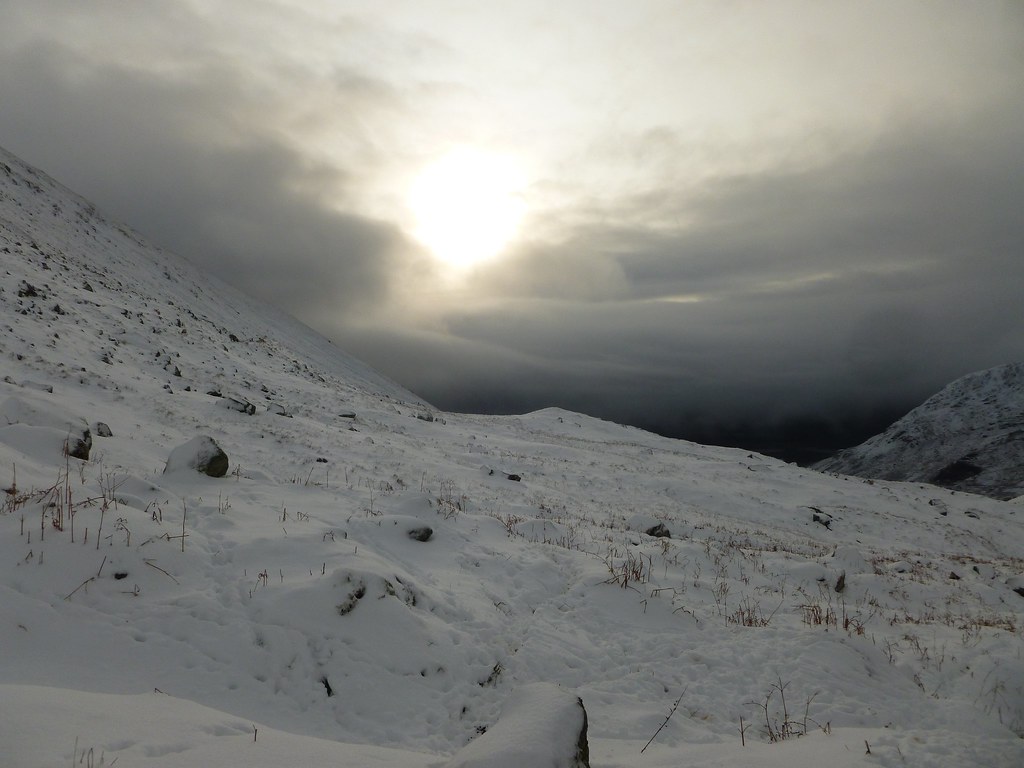 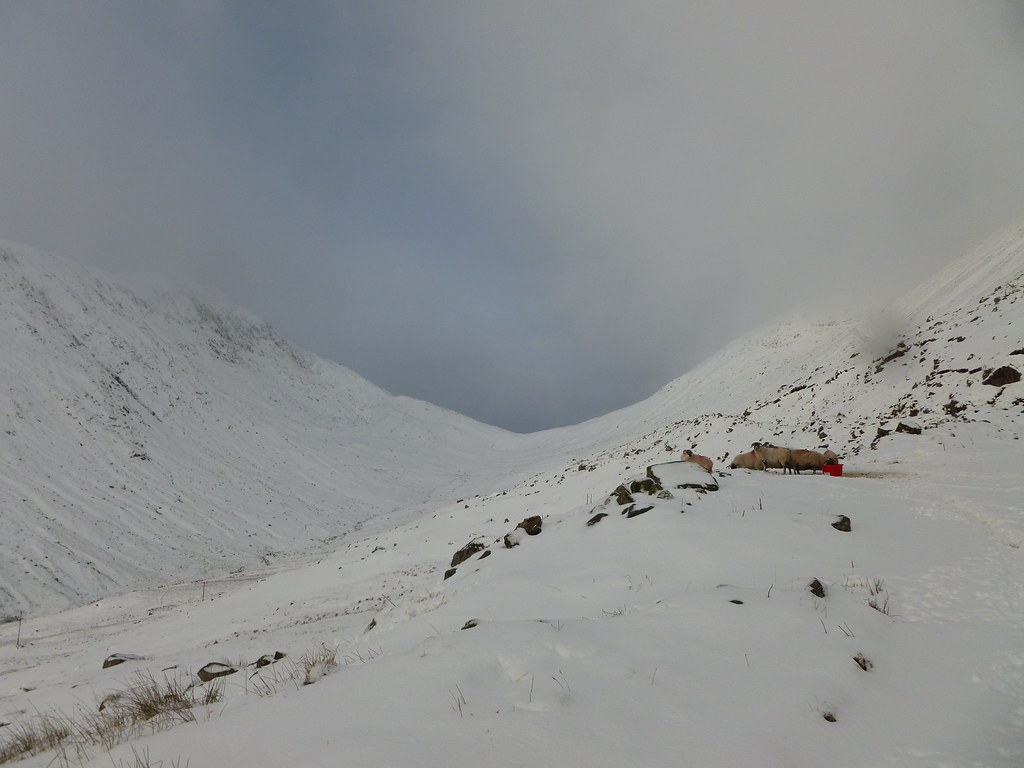 We followed the sheep further along the track and then turned right for another track to gain the start of the ridge.

Sheep are like Sand people, they walk in single file to hide their numbers. 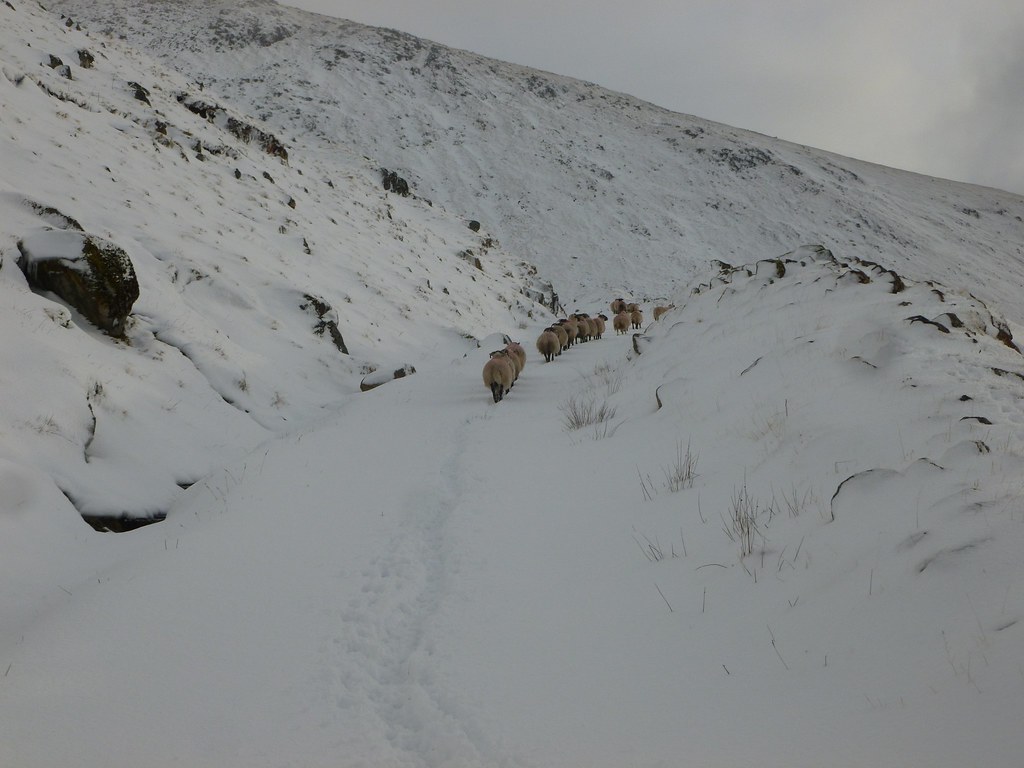 We struck off the track at last straight into deep snow. This ridge was ridiculously hard work. There were some very steep sections with waist deep snow and there were several occasions where we got stuck and required digging out. 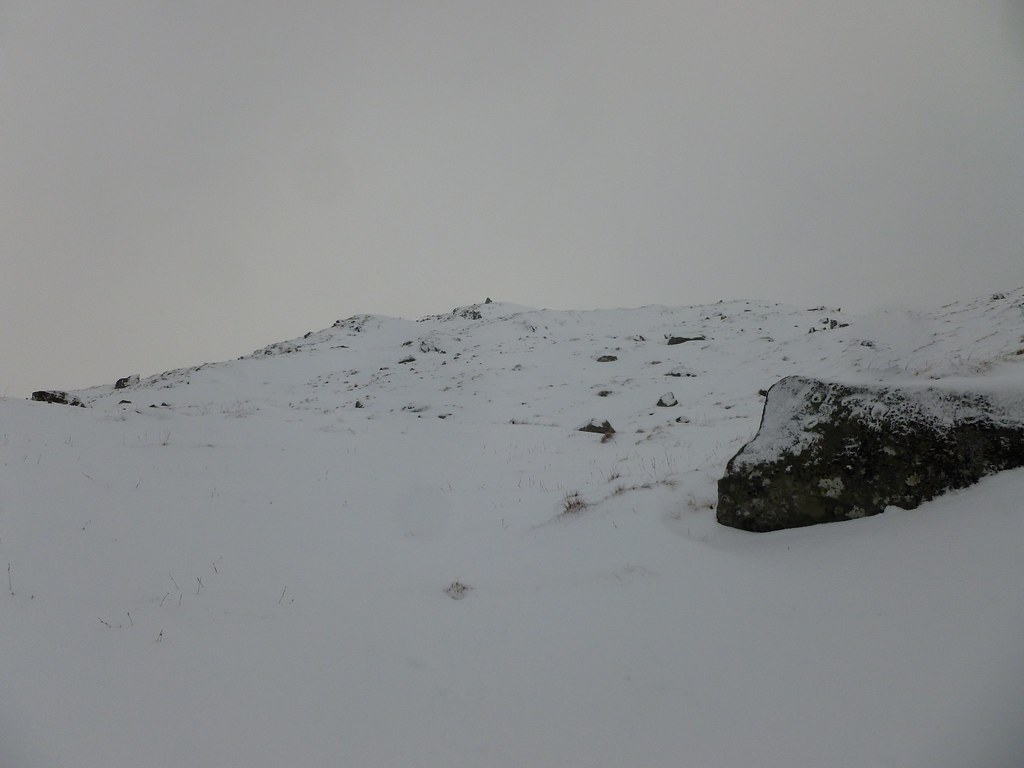 The visibility had completely gone by this point, so there was no stopping for views.

We plodded on, up and up until at last, we saw the top of the ridge! Suddenly the snow was harder and it was possible to walk rather than wade. Relief!

It had taken us 3 and a half hours to this point, a testament to the conditions.

The wind had picked up and we could see the start of the ridge towards the summit of Beinn a'Choicuill heading over some craggy bits, so after a quick drink of water and a check of the map, we headed off. 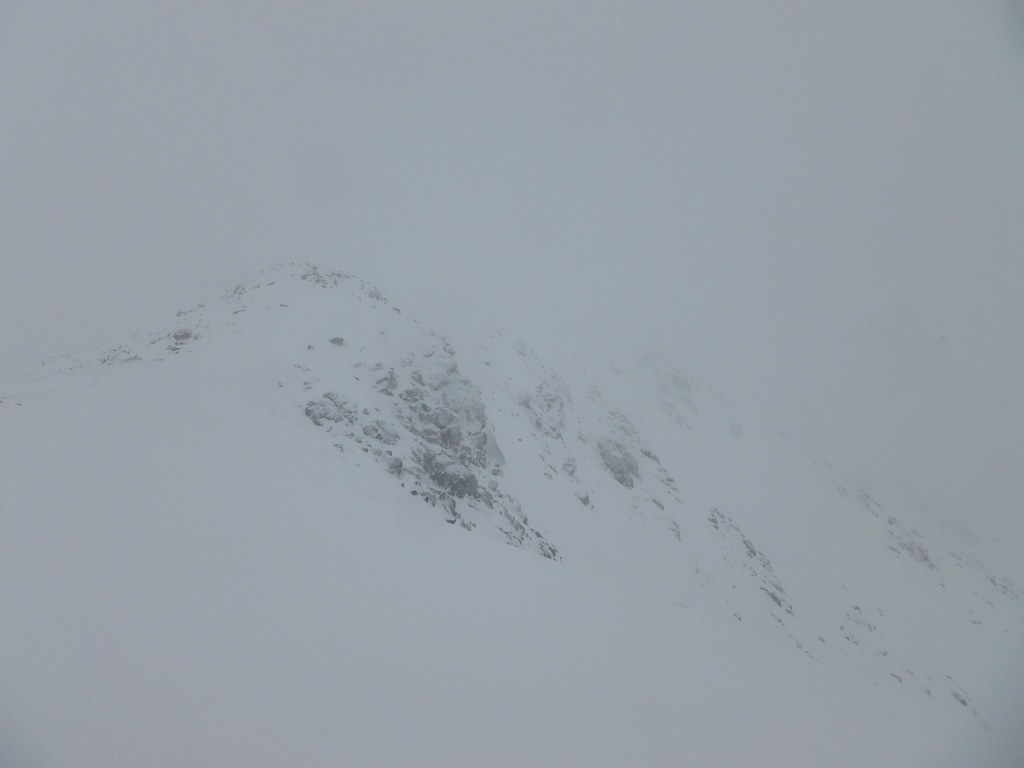 It was much easier going here and it was snowing so we were turning into a pair of abominable snowmen, which led to the debate "is there more than one abominable snowman?!" Discuss. 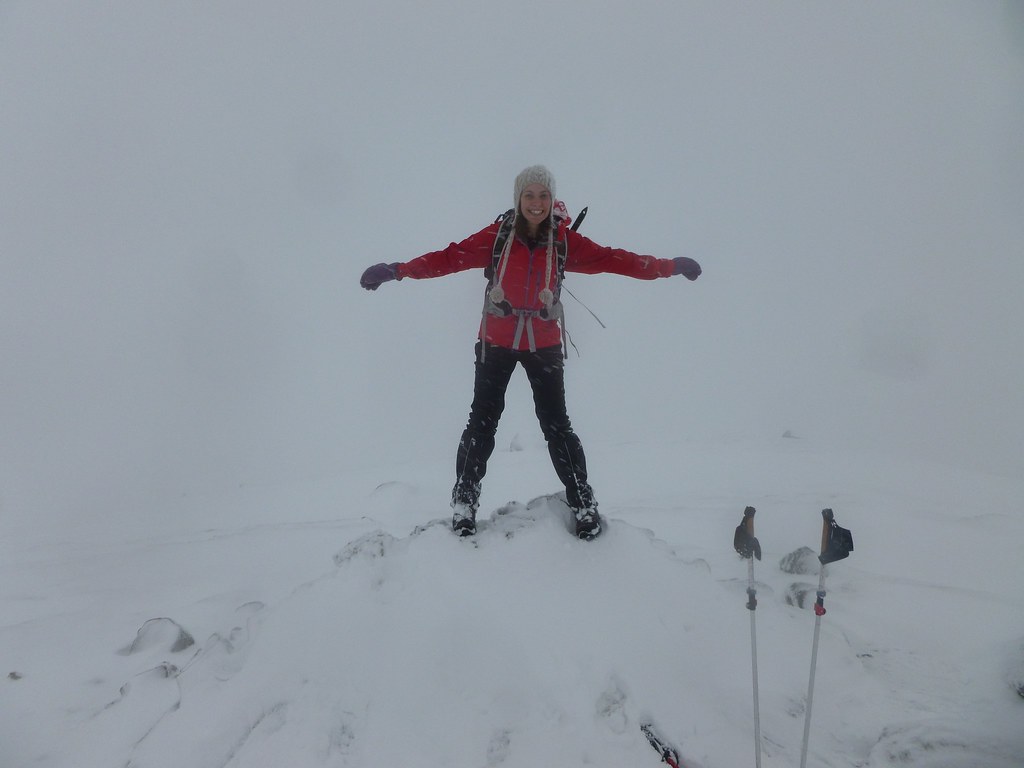 and it was very cold so we followed our footprints back along the ridge to where we had joined it. We then continued down the ridge to the bealach. There was more insanely deep snow here and a lot of the time it felt like we were more swimming than walking.

As we approached the bealach, the bulk of Beinn Eunaich began to appear out of the gloom. It looked absolutely fearsome - extremely steep and rocky.

Hoping that the snow conditions were easier, we waded across the bealach and set off up. 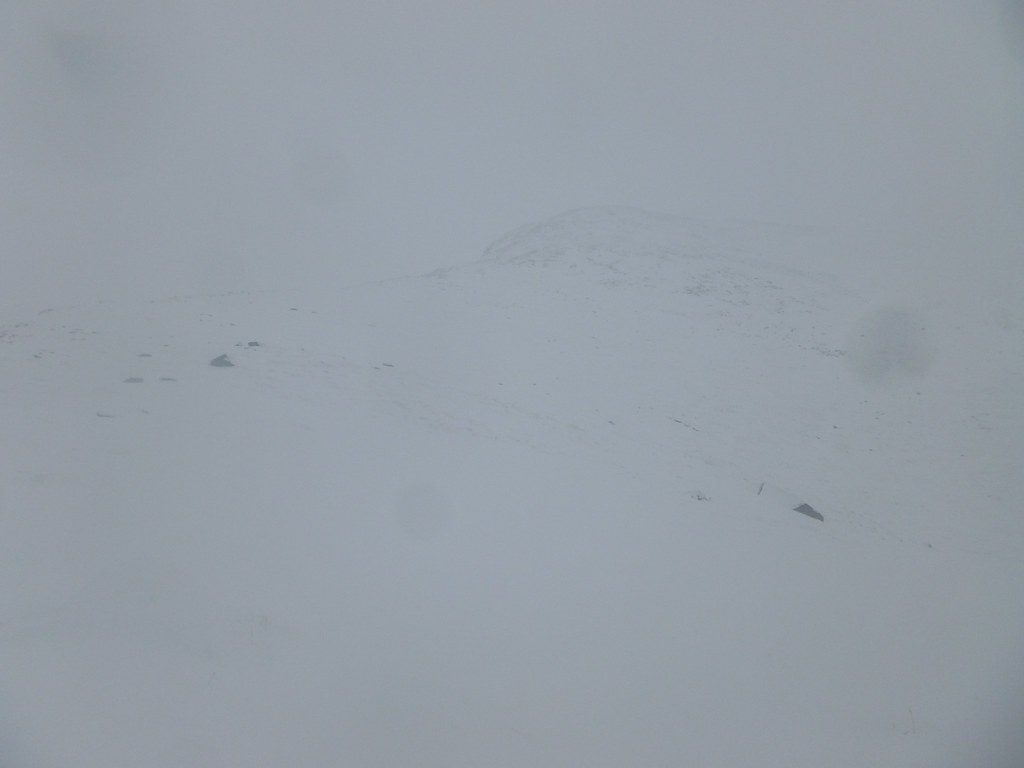 It was a classic case of looking worse than it was, and although it was very steep and the rocky bits nearer the top were quite fiddly, it was very direct and not very long (only about 250m of ascent from the bealach) before we reached the summit. The snow was much less deep - it was windier here so perhaps had settled less.

Happy to be on the summit 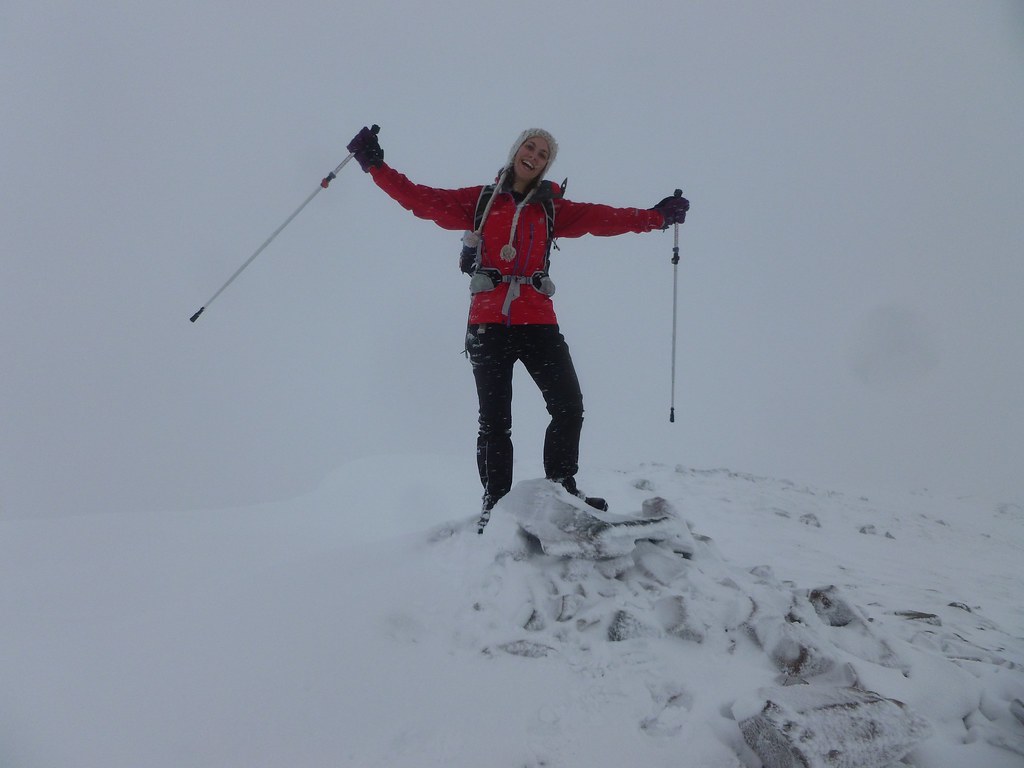 After attempting to get a phone signal and an update on the tennis, we decided that we didn't really fancy going down what we had just come up, so took a bearing in a southerly direction. The snow was still packed harder and wasn't bad to walk on. We plodded along down the ridge, sliding around a bit as it was quite icy in places, whilst negotiating our way around rocks. 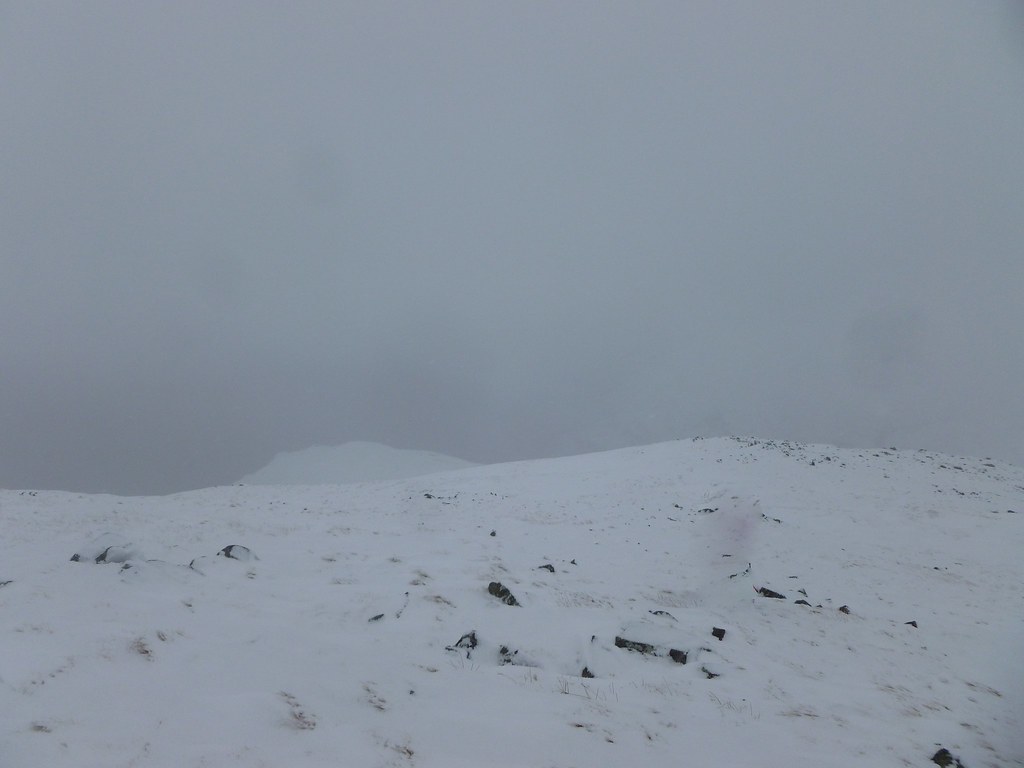 We eventually picked up what looked like a path which helped us to find the beginning of the very steep descent, although we lost it soon after and made our own way down, slipping and sliding as the snow got slushier towards the bottom. As we got lower, the snow turned to rain. My icicle hair started to melt at last and we were warming up.

This doesn't really show clearly how steep the descent was, but there is, at last, an Awe-some (groan) view 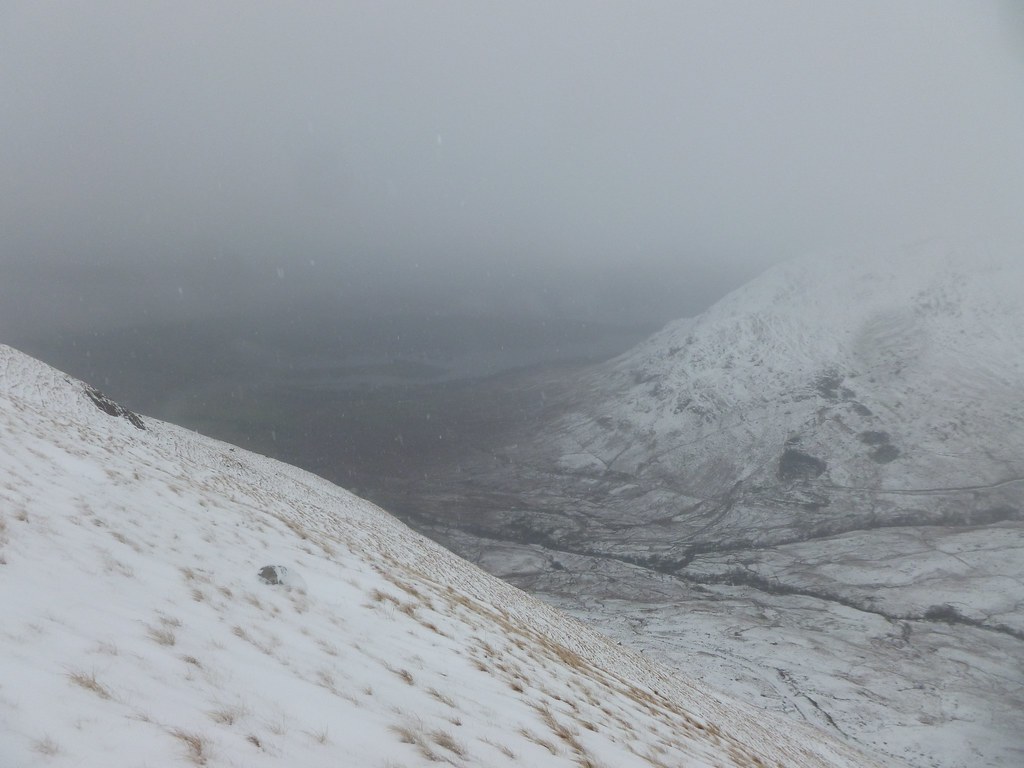 We rejoined the outwards track and from here it was an easy march back to the farm (the cows completely ignored us again) and made it to the car just as it was starting to rain. 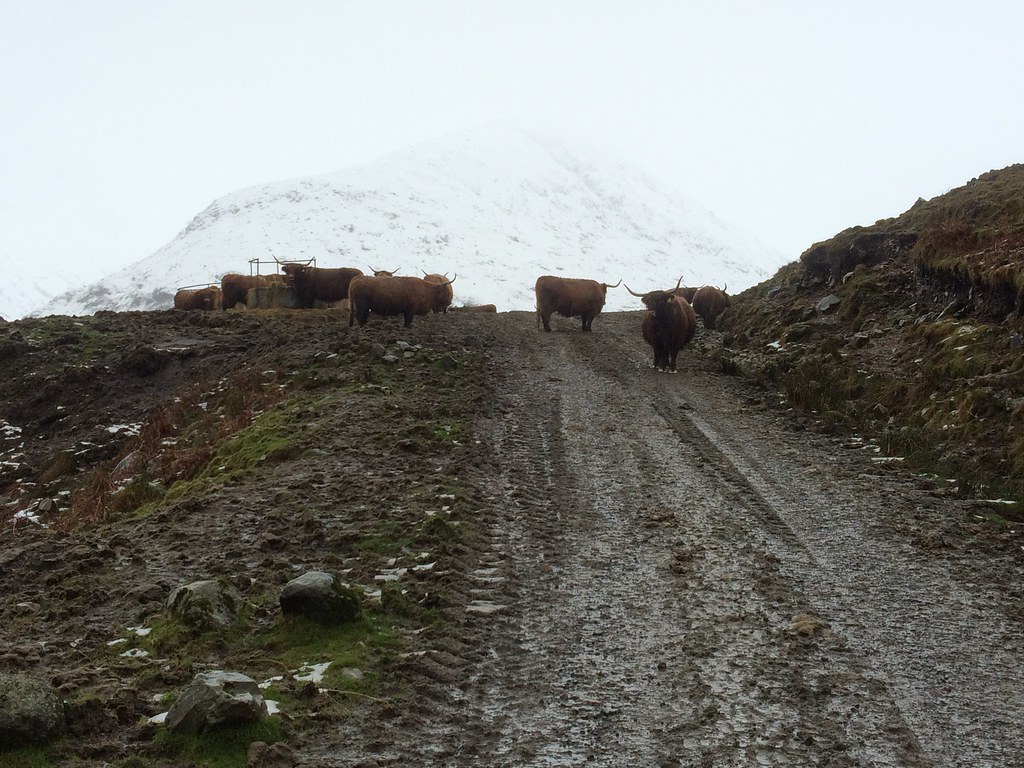 Not quite the planned day

But a lot of fun anyway

What a smashing report, I really enjoyed it!

Well done for getting out in less than favourable conditions- you earned those two hills ticks.


As for the cows, there was no animal psychology from me, I just ran and ran until I was well away from them!!!!!

Great report and photos. Well done for making the best of the conditions. Looked like a tiring day.

pollyh33 wrote:
As for the cows, there was no animal psychology from me, I just ran and ran until I was well away from them!!!!!

Thank you!
Haha that would've been us too I think, if they chased us

Riverman wrote:Great report and photos. Well done for making the best of the conditions. Looked like a tiring day.

Cheers, aye well had to burn off that breakfast

ancancha wrote:After all that steak pie and beefburgers you weren't concerned about the bovine pressence on your walk

Hadn't even thought of that

I seem to remember when I did these (a while ago) there was a warning notice near the start about cows with calves. But when you look as ferocious as highland cattle do, you can actually afford to be quite docile

Did you ever think about picking up a pair of snowshoes for days like this?

They are very popular here (the northeast of the US) and really make a difference in those waist high drifts!