More proof that March can be one of the best months for walking. I had walked into Tea Hut bothy on the Friday evening, having arrived at the top end of Glen Torridon just as complete darkness had descended. The walk was uneventful, following the main estate track over to Achnashellach before forking off onto a less used track. The bothy was somewhat on the small side. I slept on the bench, and there was probably room for a couple more people. No fireplace, but I'm rubbish at lighting fires anyway, so I just got on with eating dinner and sleeping.

In the morning, I headed up to Coire Lair, with Fuar Tholl as a possible first stop. The weather was great if a little hazy - a great ridge of high pressure promised to sit over the west coast all weekend. I couldn't see a particuarly easy route onto east ridge without losing a lot of extra height, so I left it out. Scrabbling up scree in the back of the corrie didn't really appeal. 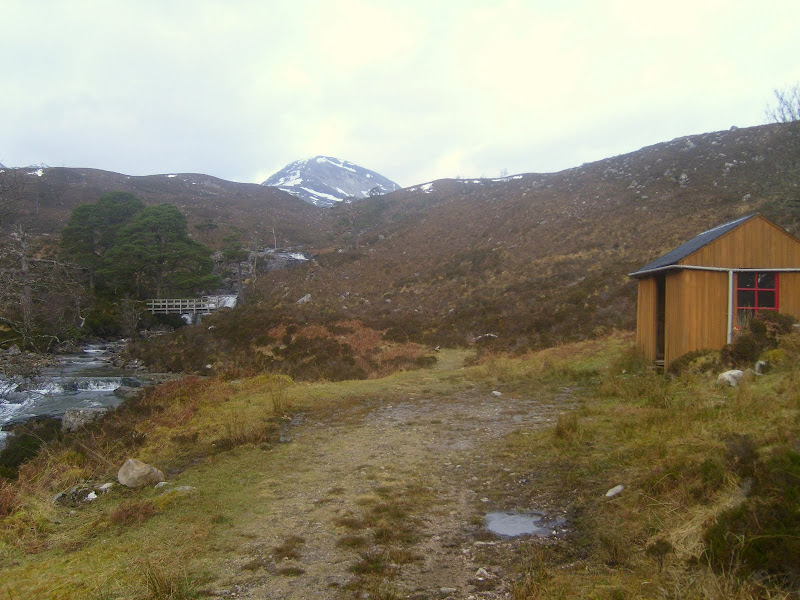 Waterfalls by the Tea Hut: 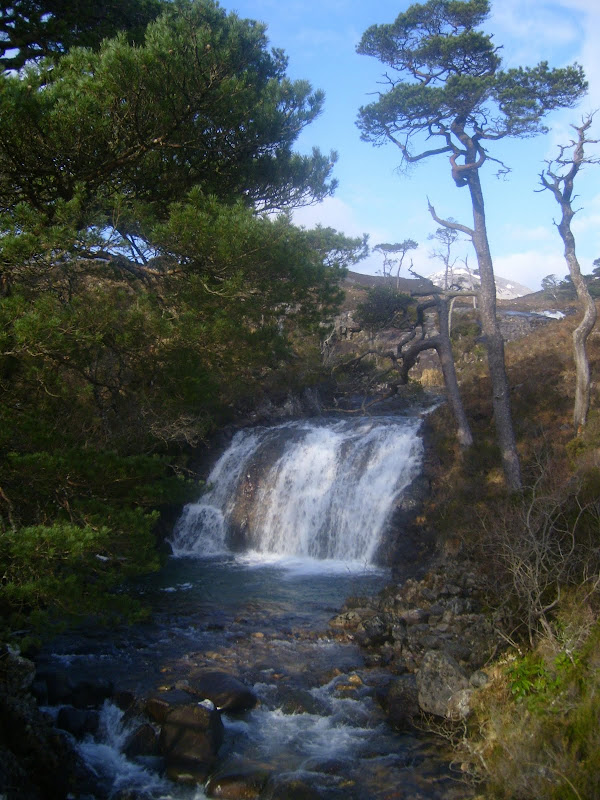 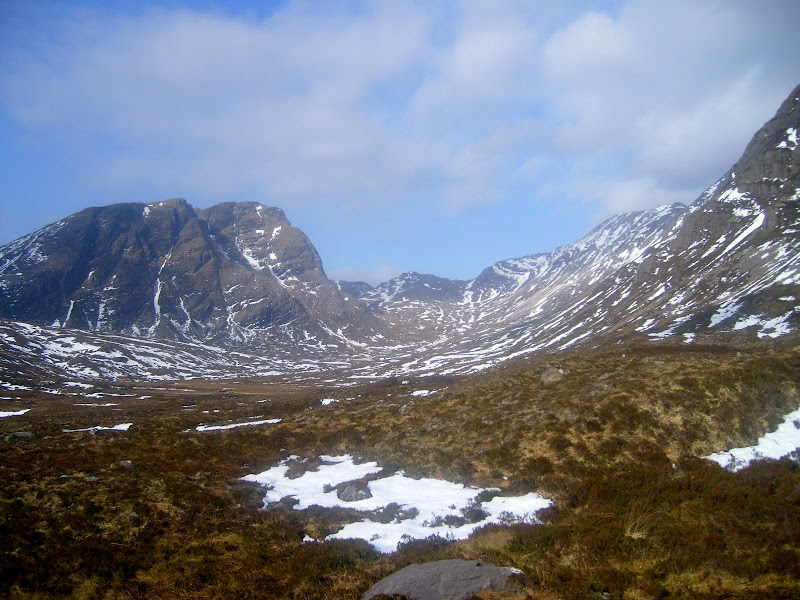 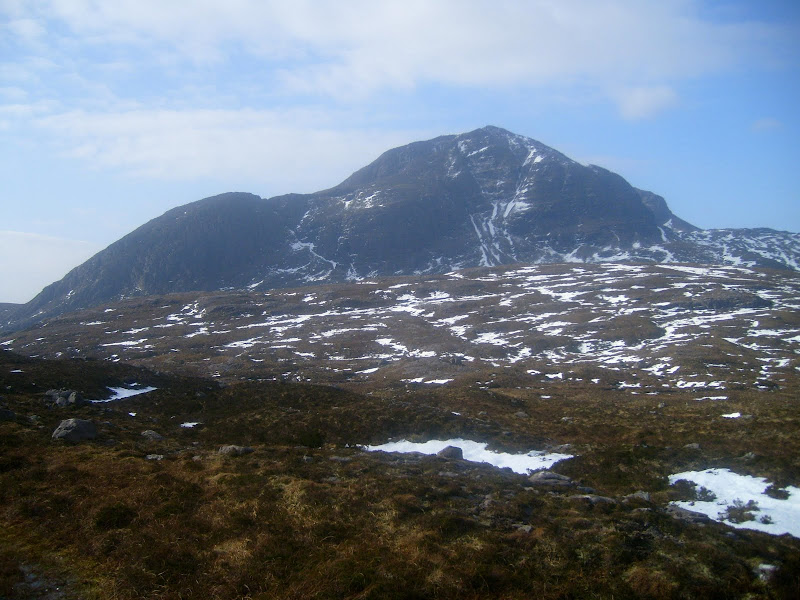 Instead, I headed to the high point on the stalker's path on the Bealach Mor and made my way up the south slopes of Sgurr Ruadh. The ground looked like it was well covered in snow, but I barely set foot on it, as it was so streaky. 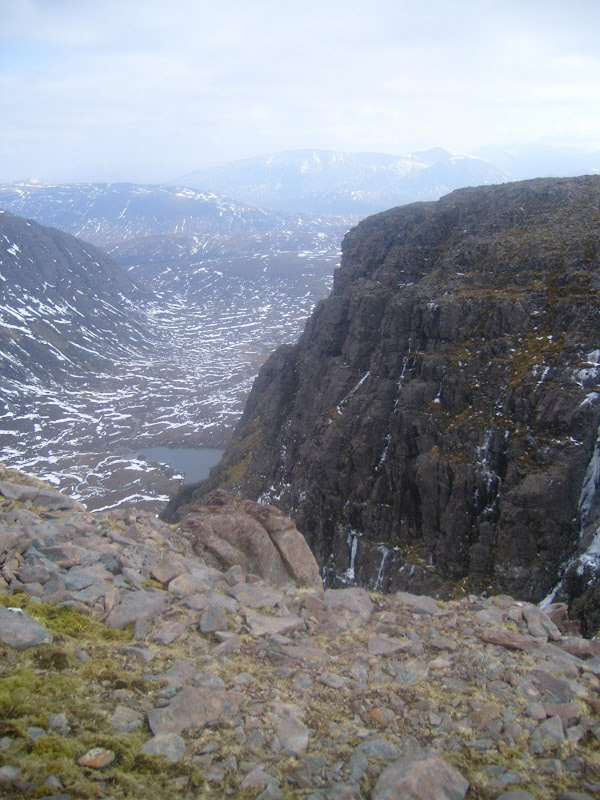 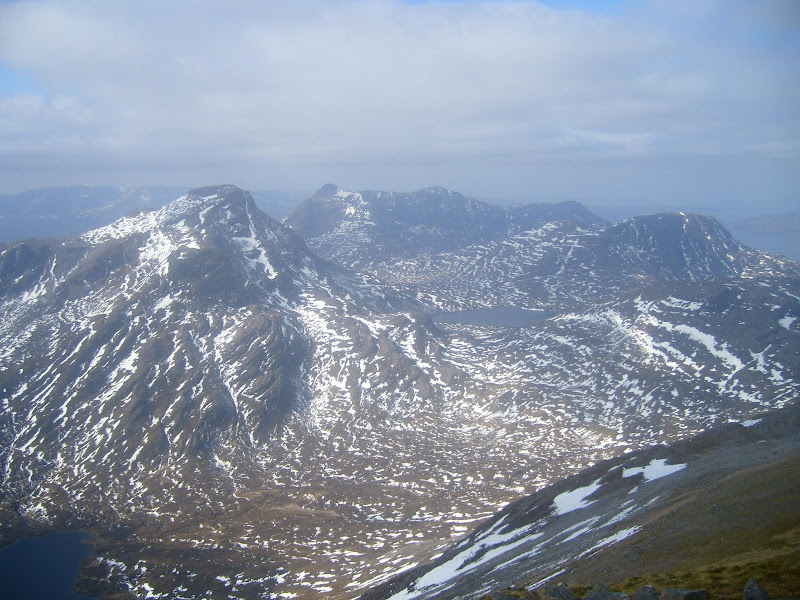 Down the rocky NW ridge then onto the col before Beinn Liath Mhor. Again, the snow presented no problems on the slightly scrambly route, as it had thawed from the crest. I met a couple of other people while contouring the 769m summit on Beinn Liath Mhor. Important to go to the east side of this - on a subsequent visit, somewhat lightheaded after a few glasses of a friend's Munro compleation champagne, a couple of us got into all sorts of difficulties on the west side. We ended up retreating. 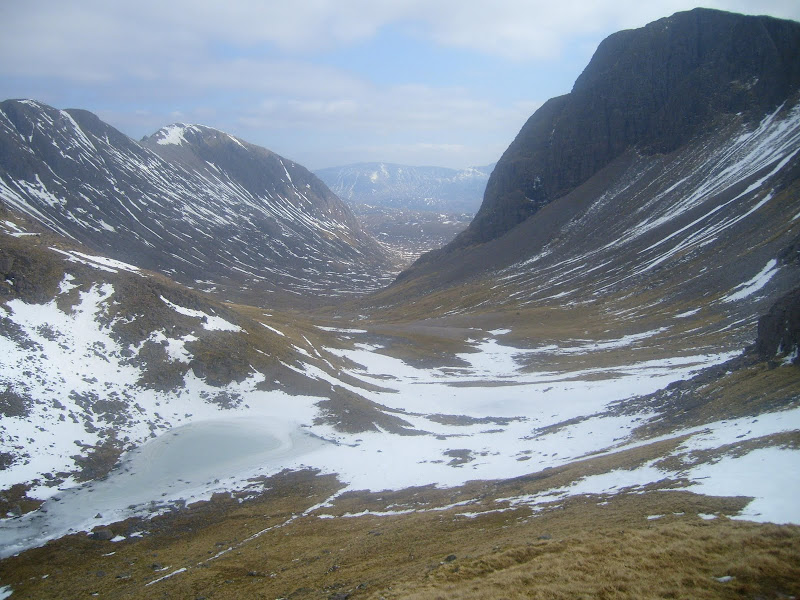 There were more people on the summit of Beinn Liath Mhor, not to mention a spectacular 360 degree panorama to Torridon, Strathcarron and the coast. Despite this, the best was still to come. 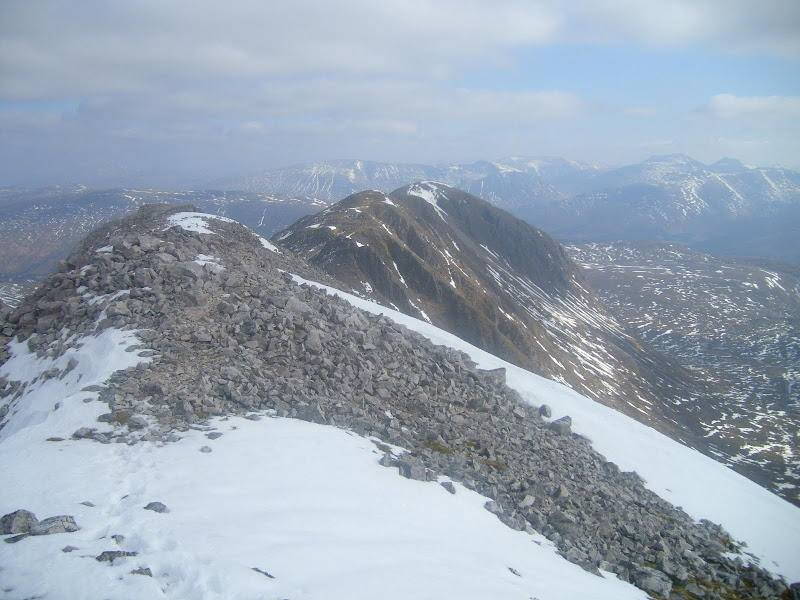 I dropped steeply down the N face of Beinn Liath Mhor, which was made of quartzy scree and quite slippery. This could be avoided easily by retreating west up my route of ascent before crossing more gentle gradients. I'm sure many have noticed Sgurr nan Lochan Uaine and its twin lochans from the summit of Beinn Liath Mhor - I certainly had on my first visit, and wanted to explore. A rocky promontory runs between the two lochs. The surroundings are stunning - surely the best spot in these hills. I certainly hung around for a bit.

Highlight of the day - Sgurr nan Lochan Uaine and the twin lochs: 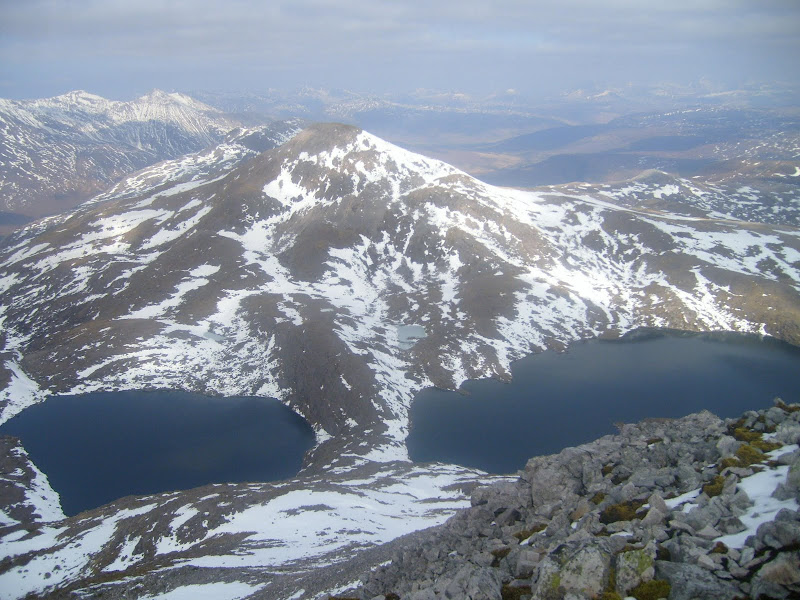 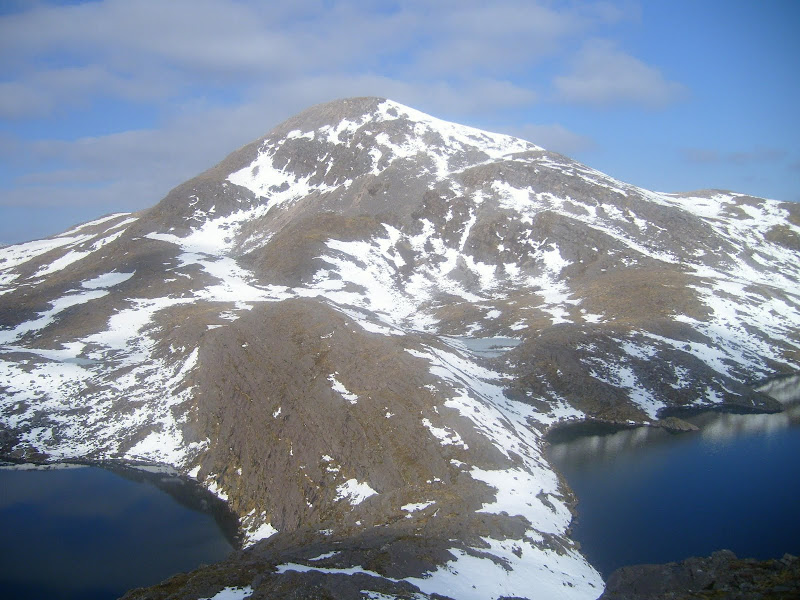 Looking south from the connecting ridge: 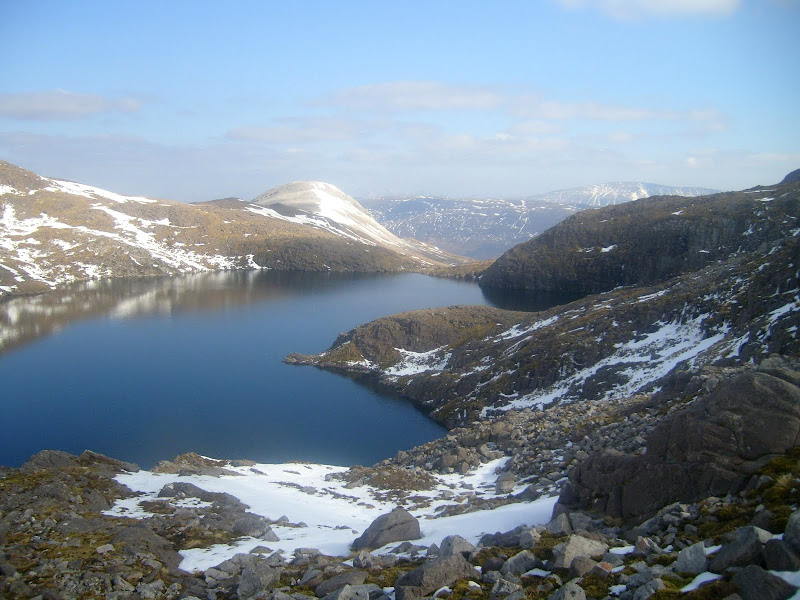 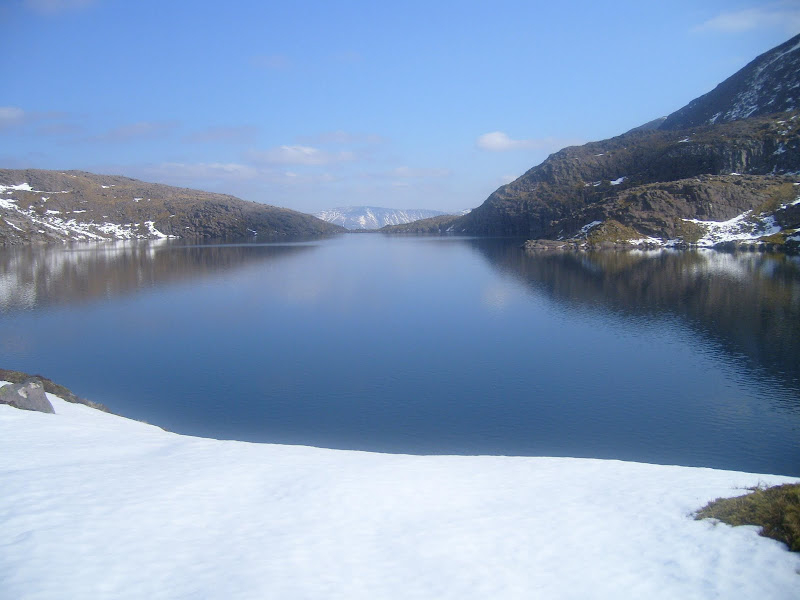 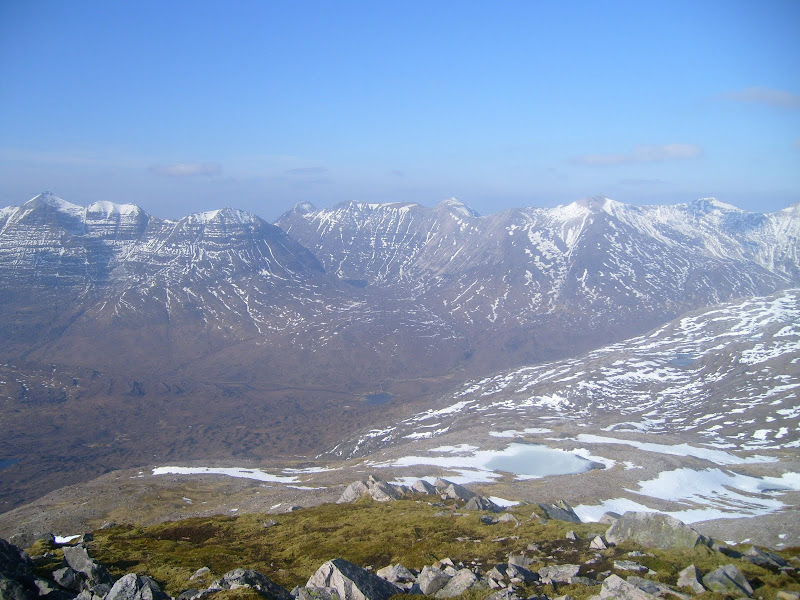 As others have mentioned before, the ridge between Sgurr nan Lochan Uaine and Sgurr Dubh was extremely rough and confusing. While fine in the bright sunshine, the route would certainly give pause for thought in the mist! Approaching Sgurr Dubh, the terrain gets rockier and rockier, and the lochans get more frequent.

A lochan near the summit of Sgurr Dubh: 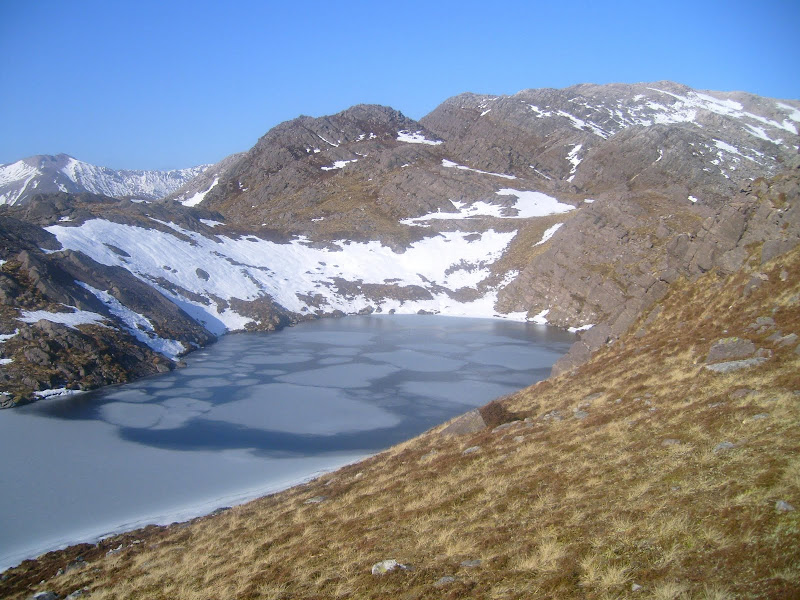 The ridge and summit provide some of the best views of this side of Liathach available anywhere, reason enough to climb Sgurr Dubh on a clear day. I'd certainly dismissed it previously. 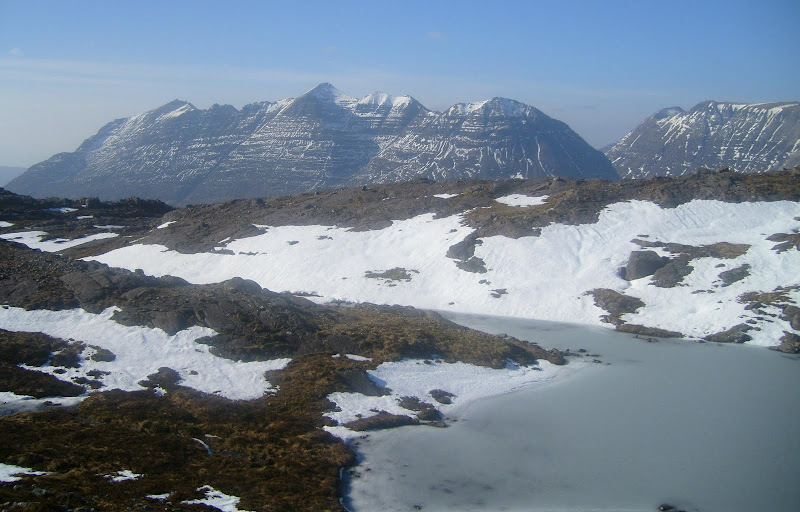 Loch Clair and some hazy Fannaichs: 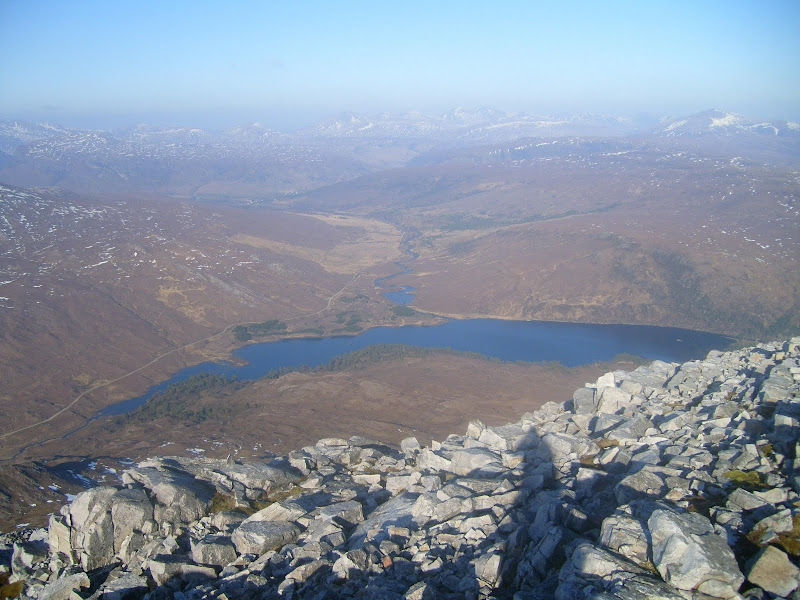 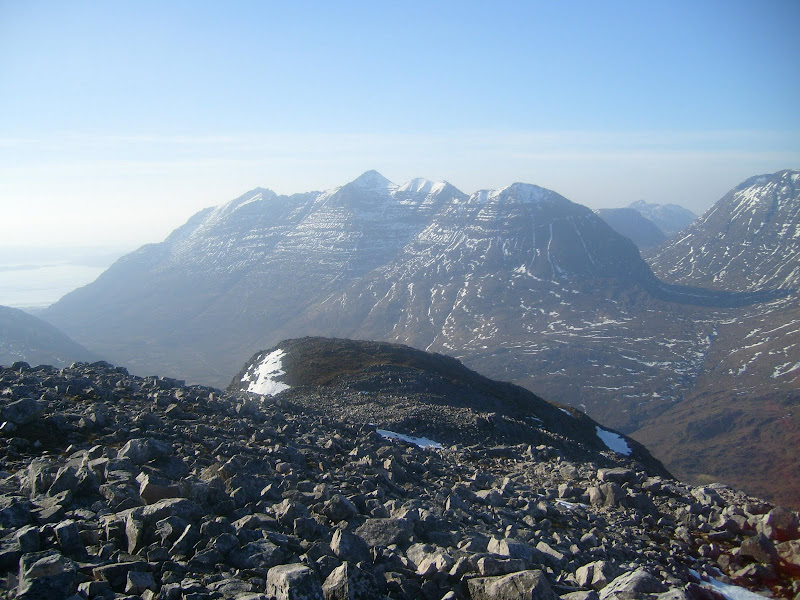 The NE side of the summit is steep, and there are many crags to be avoided. I worked my way east to drop down heathery slopes into Coire an Leith Uilt, then down to the Coulin lodge along a vague stalker's path. The walk back to the car was a great end to a classic day. 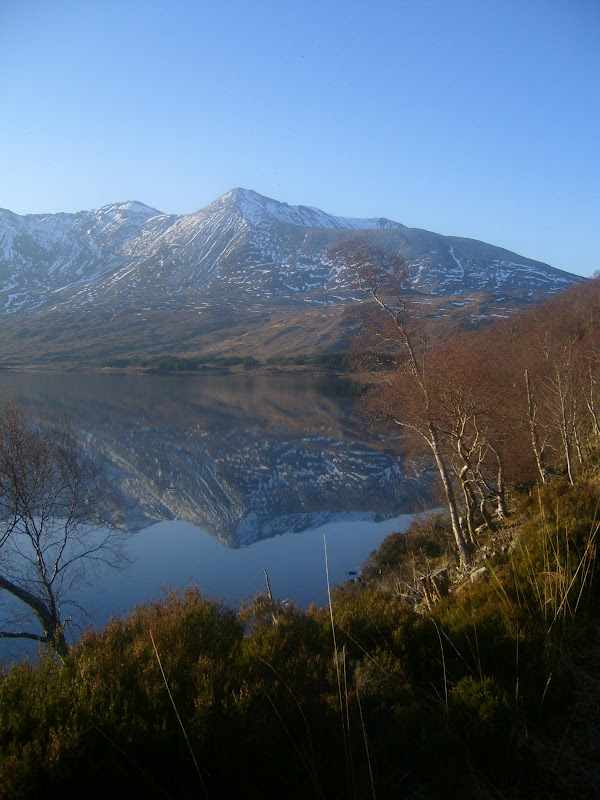 I knew my old club were staying at Ling Hut, so I called in to see if anyone I knew had turned up. A couple of old friends were there, so I blagged a bed for the night and did a round of Beinn Alligin the next day with them in similarly classic conditions. Top weekend!

Lovely report malky - even if hazy, the photos are great and bring colour to an otherwise dreich day here (says he looking out the window). I haven't walked any of the higher hills in this area yet but this report and your other one from 15 March 2008 are helping whet the appetite - need to get some into the plans.

Your spoiling us tonight Malky

Some energy you got for writing these TRs.

Really hadn't thought of doing these hills that way.

Might try that one going up Fuar Tholl but not Sgurr Dubh.

Cool - whereabouts? Not in the bothy I hope

Kinley - thought you'd done something vaguely similar. I held off posting up this report at the time as it would've looked rubbish next to yours

Certainly did the middle part before. But I hadn't considered that Coulin Pass approach. We've fancied walking that way for a while but I'd not managed to fit it into anything. This looks excellent.