I had planned to spend two days at Achnanclach and climb Beinn Stumanadh and maybe one of the Munros or Ben Loyal, however having got halfway to Sutherland I discovered I had no photo ID on me which would have made working quite difficult on Tuesday, so I ended up not getting to Sutherland until halfway through Sunday

I parked up on the snowy verges beside Loch Loyal, and shouldering the overnight bag set off down the path to the footbridge. Once over the footbridge there is a discernible 4WD track heading toward the shingle beach of the Loch. However after a short distance the track becomes less discernible and I walked along the beach until the trail becomes visible again just before you need to cross the stream running down into the Loch. Once over the Loch the 4WD trail continues gently upwards, the tracks throughout were pretty boggy and I would guess that without the snow cover the walk would have been a lot of a bog slog, so i'd probably recommend doing this in summer or after a cold snap.

Follow the track to the Bothy (here I dumped off the overnight bag, including coal, and just took my poles and a camera), and then keep going passed the Bothy to the large gate in the fence on the far side of the Allt Ach nan Clach.

Having got through the gate and crossed back across the Allt Ach nan Clach I followed the soggy quad bike track up the slopes in front of me. The track (which was sometimes onscured by the snow) climbs high up on the slopes of Sron Ruadh before descending to another large gate in the Coire Mor

Having gone through the gate I descended to recross the Allt Ach nan Clach and then took the central spur up to the trig point on the summit. It was a bit of a slog especially given the amount of powdery snow covering the slopes. The views are well worth it however. On descent the powder did mean I took the quick route down the gully named Coire na Caileig, which given the wetness underfoot I probably wouldn't have done without the powder to soften my landings !!

Once back at the gate in Coire Mor I descended back to the bothy which is a well maintained 4 room shelter, where I spent the night, sadly the next day was a wash out in terms of walking. But Beinn Stumanadh was worth it for the views and an evening with a good fire and some single malt. Because I didn't walk back out to the car until the following morning and carried a fair weight into the Bothy but only carried poles and camera to the summit the timings for the walk are approximate bit probably not far off 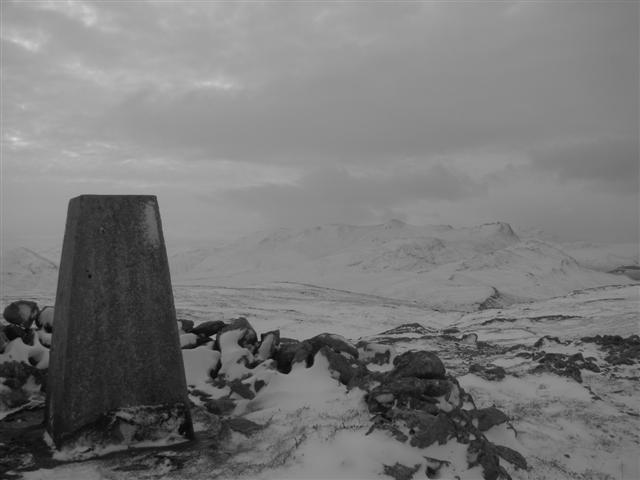 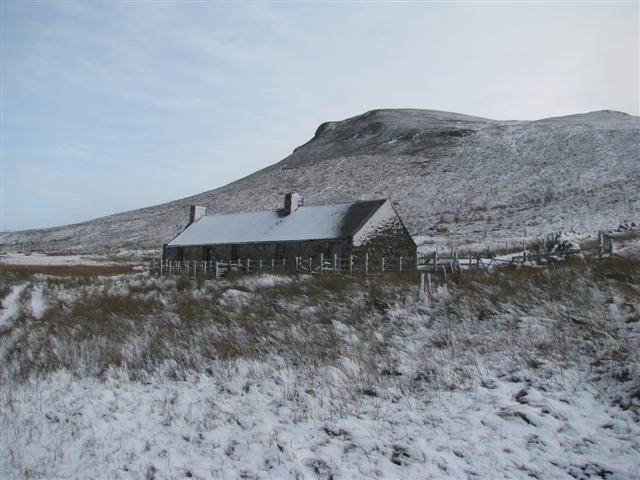 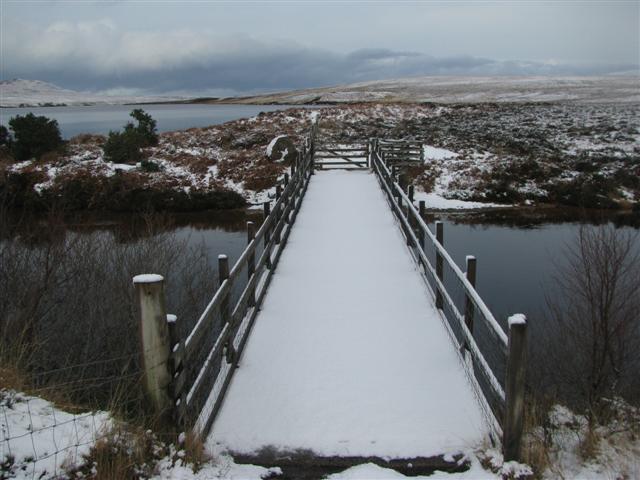 Path to the footbridge

Is that an MBA bothy or Estate?

We saw a baby ptarmigan when we were up here in the spring one year. I almost stepped on it as it was so well camouflaged, probably even better camouflaged in the snow. When we looked in the bothy book we saw that the pioneers of Marilyn bagging, the Bowkers had stayed there.