Archive reports always seem to take me to 2007 - strange as that year had some of the worst weather in quite some time! This was one of the very rare times I've become involved in a charity walk (Wateraid's attempt to put someone on the summit of every Munro at the same time). Headed through the haar up to the Mullardoch dam with Dave R, Donald and Kat early on Saturday morning to meet Karl the boatman. With the mist still thick, he began to take us down the loch. I'll never be sure whether he managed to get lost or it was his obscure sense of humor, but 20 minutes later we were up under the dam! After this little mishap, we managed to make our way westward with the aim of being dropped at the stalker's path up Coire Domhain. In the event, the mist meant we couldn't find the spot, and we ended up getting ashore at the narrows a km or so further on.

Time to start ascending, and we headed steeply up the pathless grassy hillside through the murk. As planned, our line took us onto the stalker's path to the un-named 913m top before long. Shortly after we hit the path, we began to break out of the inversion. Suddenly, the hills to the north of the loch became visible one by one, and we were hit by the warming sun. 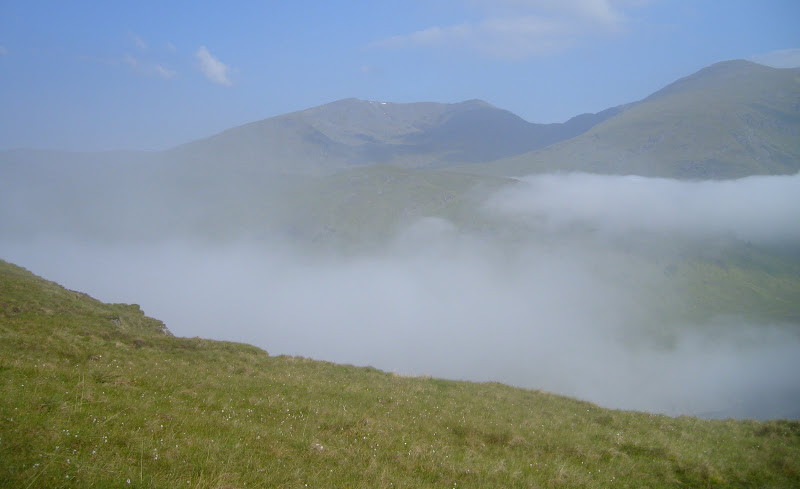 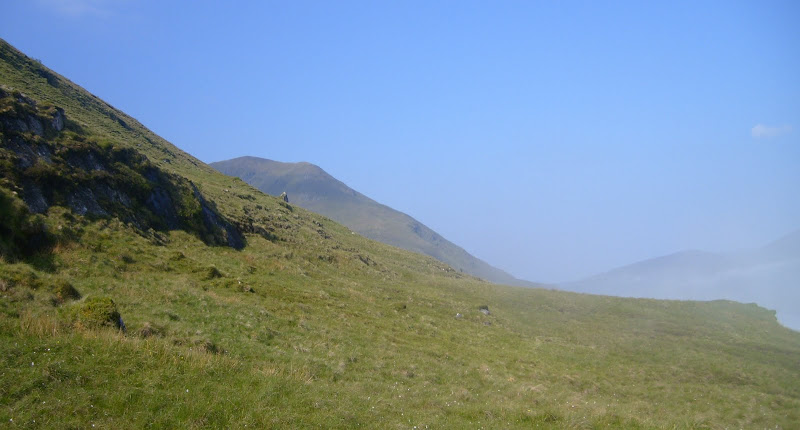 Back to the east: 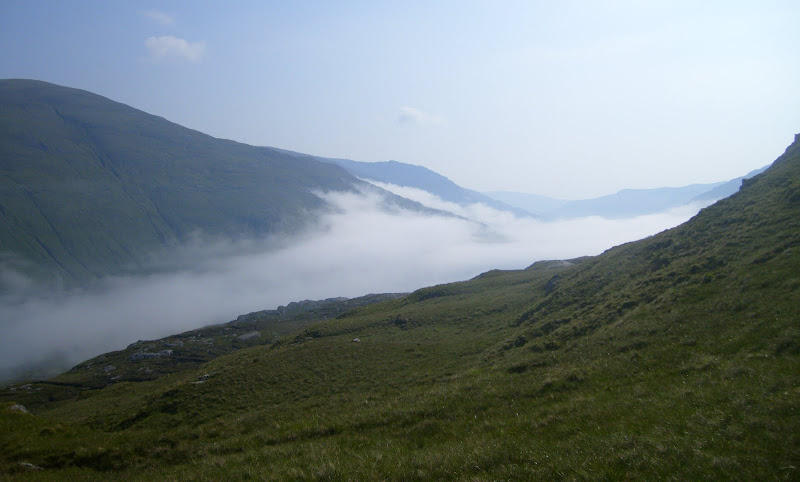 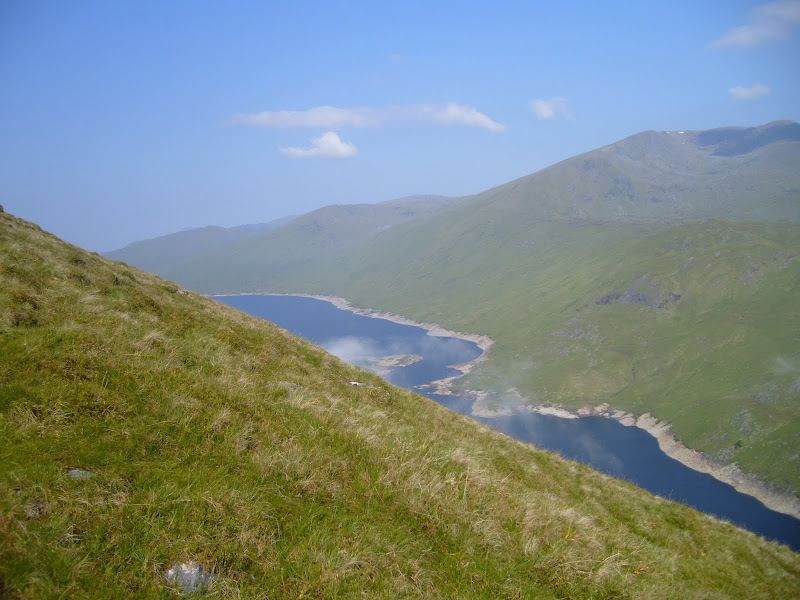 This was one of those great zigzagging stalker's paths, never obvious from a distance but always easy to follow, so the going was pretty easy, and as we gained height, the gradient slowly levelled off. Before long we were on the summit, with great views south to Carn Eighe and the ridge extending east to Tom Choinnich. 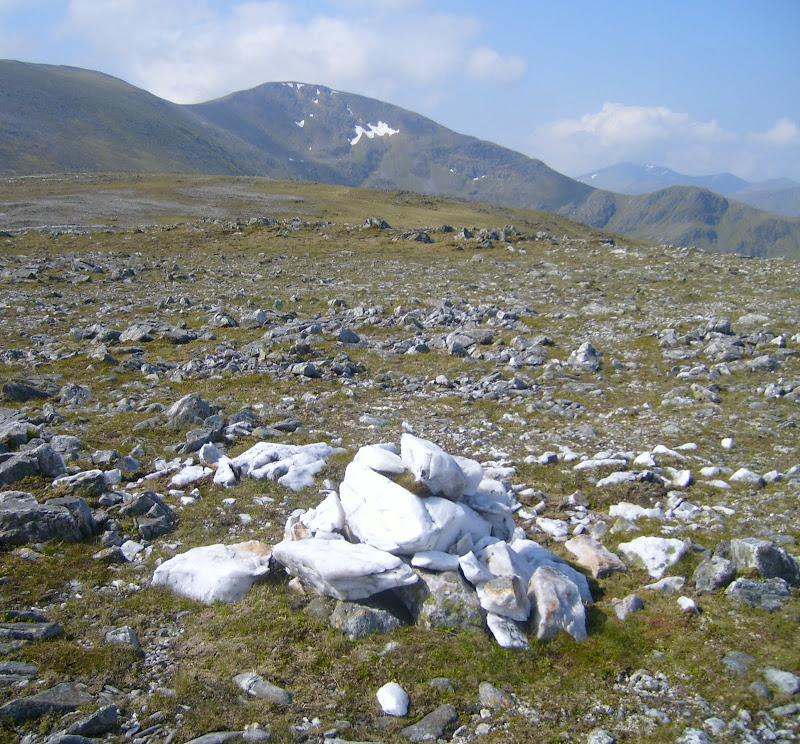 The ascent to Stob Coire Domhuill was made easy by an unmarked continuation of the stalker's path, which even had very subtly built stone steps in some of the steeper parts. 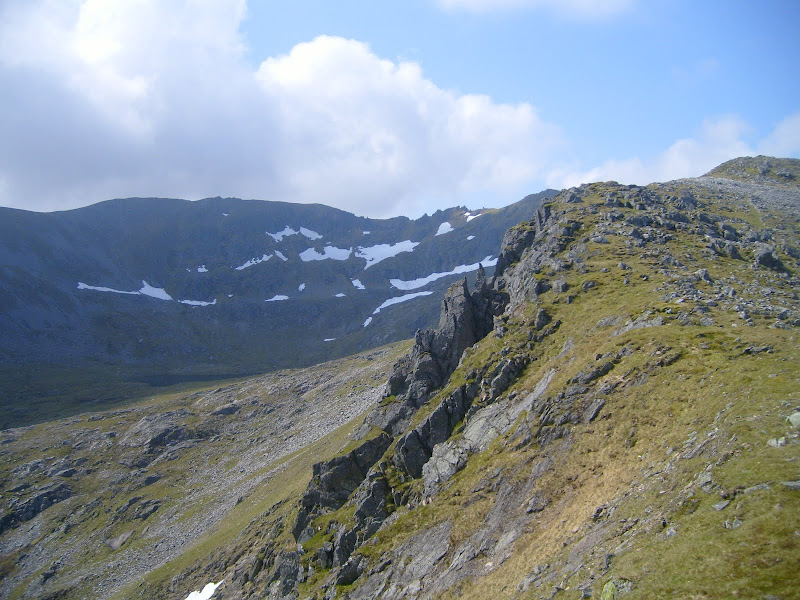 This route joined the main east/west ridge just west of some splintered pinnacles. Last time I'd seen these was in the snow and mist a few years before, when I'd got lost and accidentally dropped off the ridge before reaching Tom Choinnich. It was nice to see how they fitted in with the surroundings, and a shame we weren't headed in that direction. 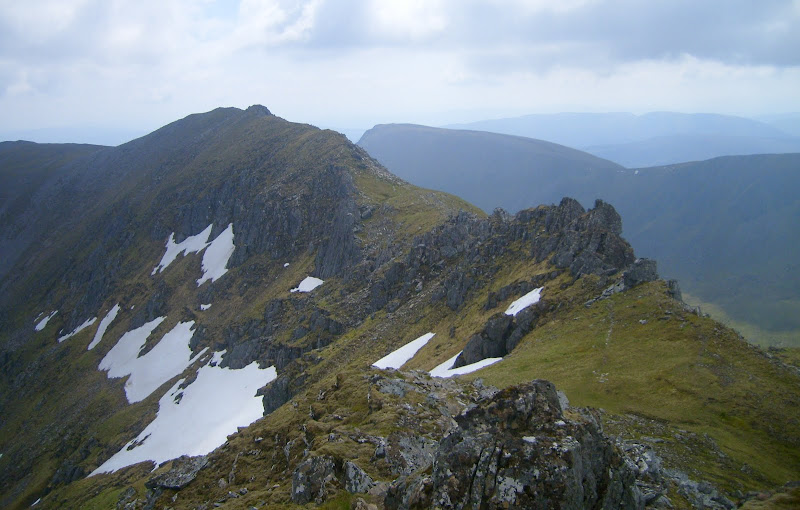 However the way we were going was almost as good, with lovely walking over short turf to Carn Eighe. There was a subsidary top on the way, but this extra ascent was barely noticed. 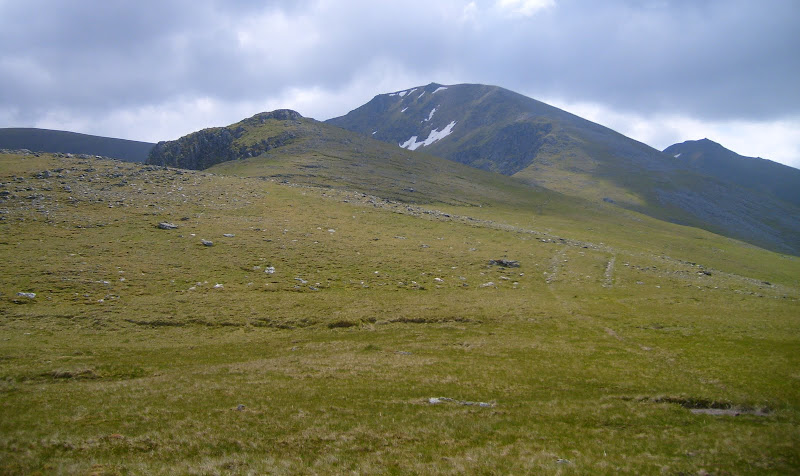 From here we turned north and descended steeply towards Beinn Fhionnlaidh. Although this tends to look insignificant from the surrounding hills, it is actually fairly prominent, with over 170m of re-ascent - no wonder people find it a bugger when going out and back. Thankfully we weren't doing that. Being away from the main ridge makes it a great viewpoint up and down Loch Mullardoch, and we enjoyed these views while eating lunch (although for some reason I didn't seem to take any photos of it 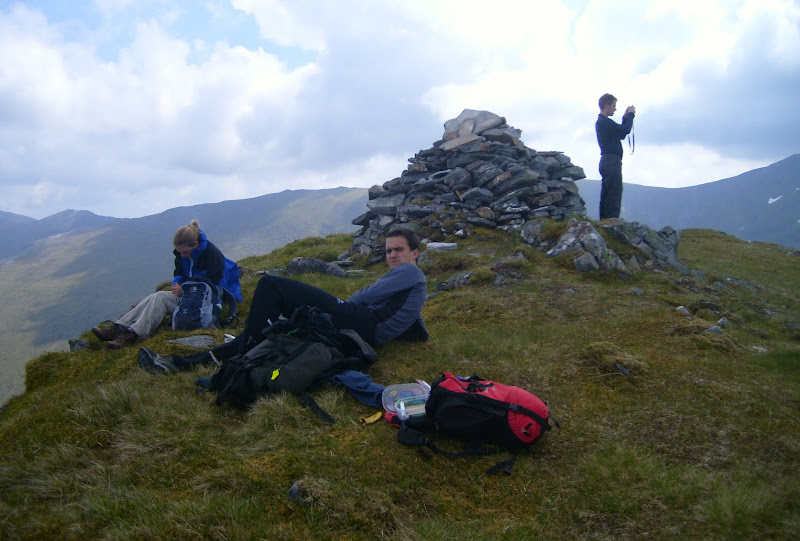 A pretty steep but grassy descent down the NE ridge took us pretty quickly down lower Coire Lochan to Loch Mullardoch - a remote side of the hill visited by few, I'd imagine. There was a virtual carpet of orchids across the slope here, and some nice waterfalls. 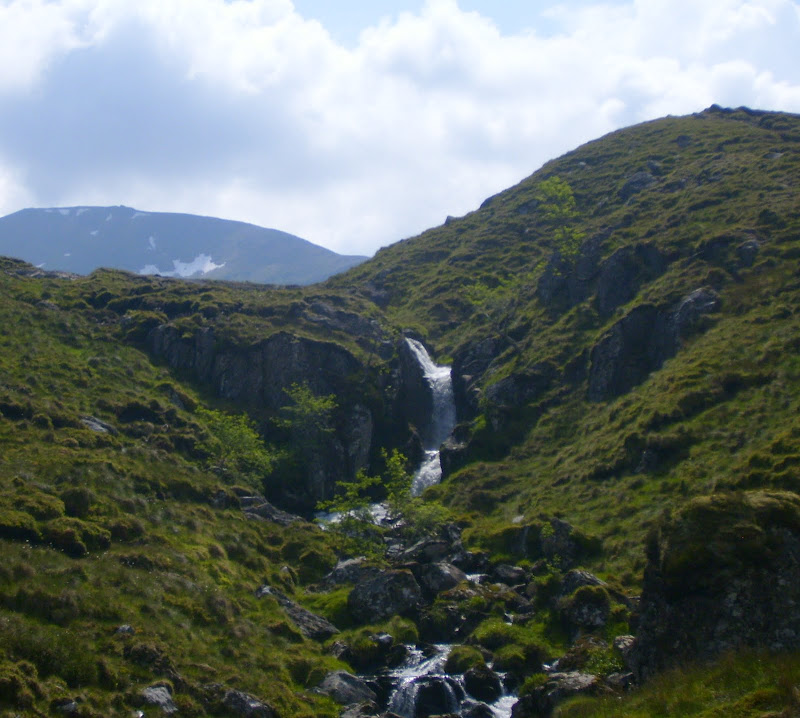 Back up the ridge to Beinn Fhionnlaidh: 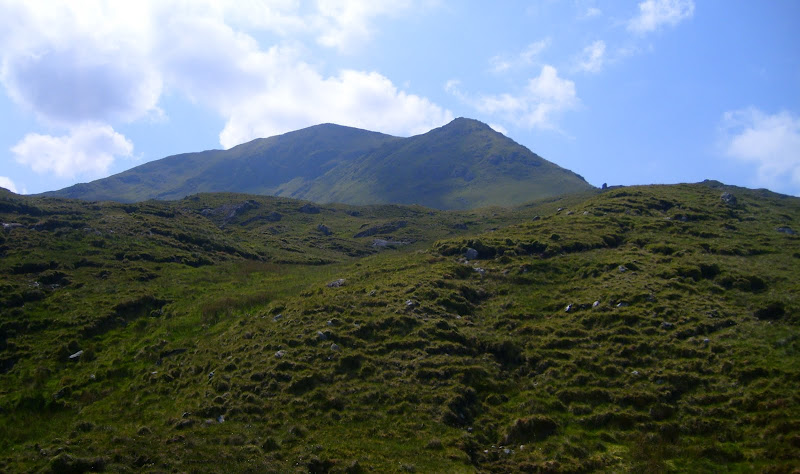 We had made vague arrangements to meet Karl back at the mouth of Coire Domhain, so we made our way along the scarred shoreline to there. With the water level low, it was easier to walk on the exposed shores than the bog above. There was an unmarked hut at Coire Domhain - more of a portakabin than a traditional bothy, but it was locked. There were more impressive waterfalls here too. 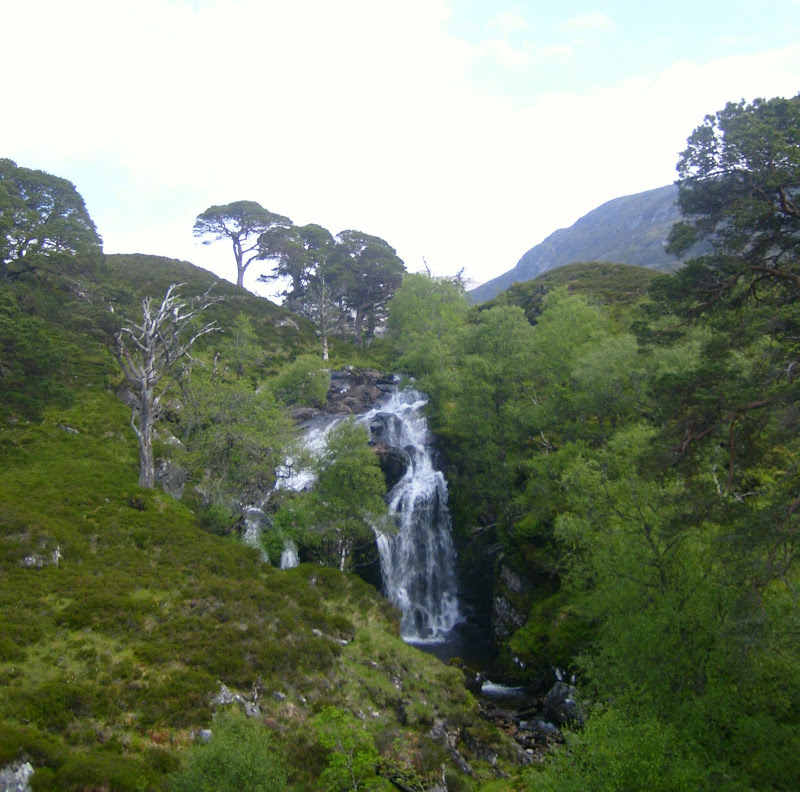 Hut just visible on the right: 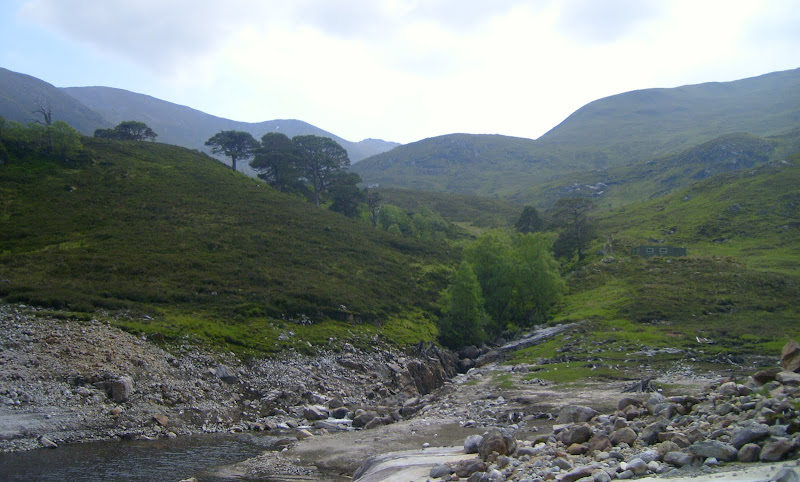 Karl appeared at about 3pm with another passenger aboard - a guy who had just compleated his Munros (the bad thing about writing this up 4 years later is I can't remember what he finished on!), and the boat trip out was a much more enjoyable affair, with great views. In particular, the area around Allt Luib nan Meann on the south shore had always interested me, being inaccessible and seemingly kept clear of deer, as there is a fair bit of natural woodland there.

Of course the views north to Sgurr na Lapaich were top notch too: 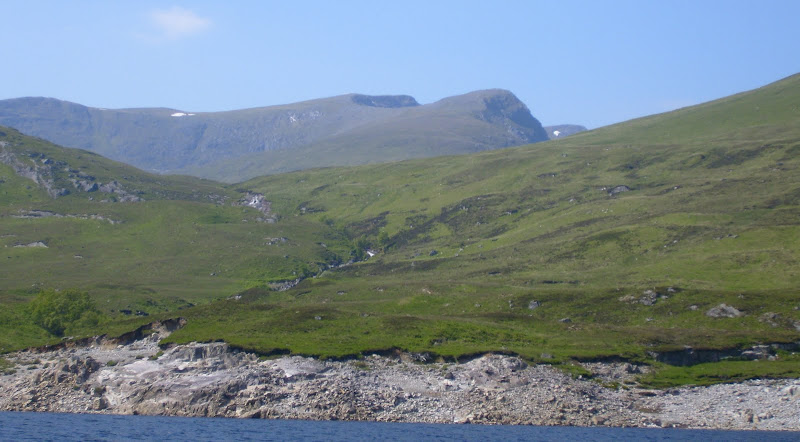 Soon enough we were back at the car, having had a great day out on the less familiar side of these hills. 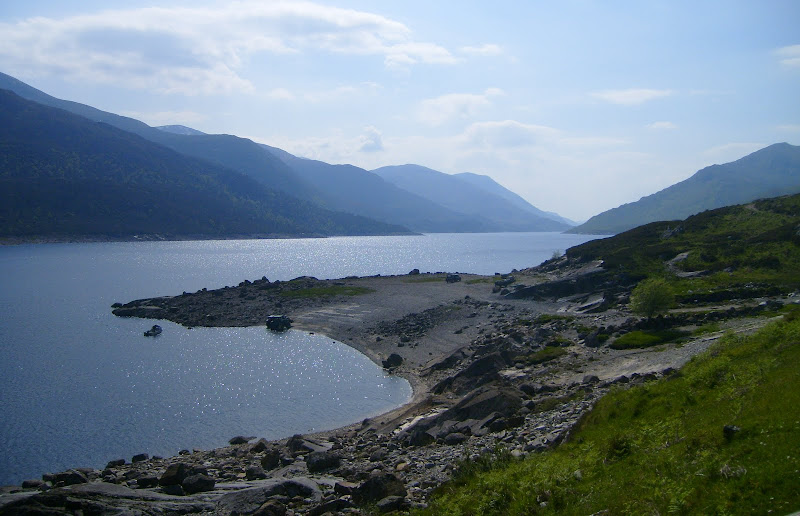