Today we decided to go and do the Glen Banvie and Bruar circuit at Blair Atholl. I'd done Glen Tilt before and I figured at just over 10 miles it would be a good distance to get Moss up to as I was wanting to get her up to 10 miles this holiday.

I'd decided to use my new jacket, which was very cosy and warm..but I hadn't thought to fill the pockets with poop bags! Fortunately another couple walking their dog and the nice ranger supplied me with a few bags - phew! Had to happened when I'd used all the last of the ones in the car too. Note to self - restock everywhere with bags tomorrow!

Disaster averted, we set off. The route was well marked by arrows, the orange ones are the markers for this walk, and so we headed along the road as directed. 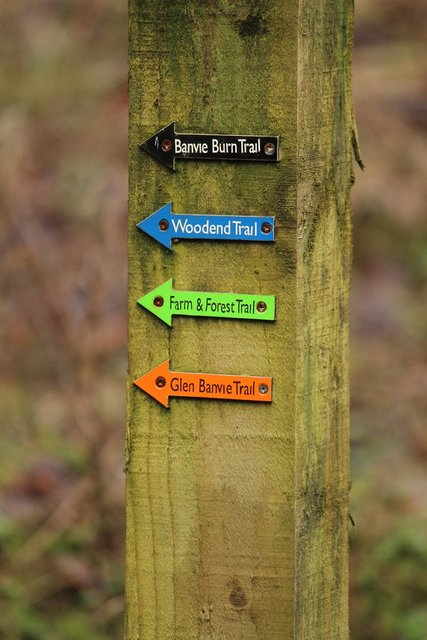 We didn't get very far when there was a major distraction in the shape of some very friendly horses, one of which had the honour of being the first to get mud on my new jacket when he/she (I didn't check!) decided to try and investigate my pockets for horse treats. No luck, not even dog treats in there so there is no chance of finding horse treats! 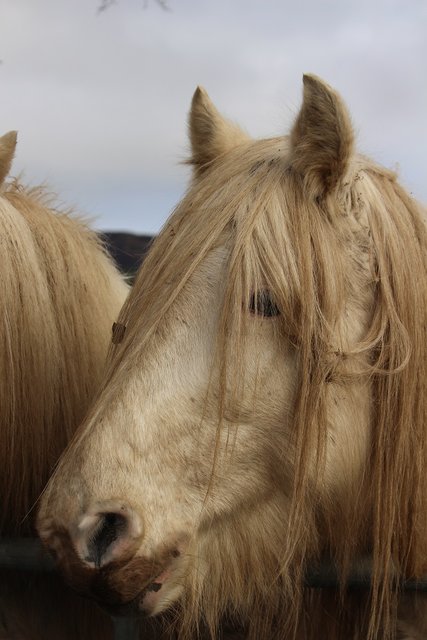 The horses were also very dog friendly, reaching down to Moss (Millie has no interest in horses and stood with her back to them). I found it cute, don't think Moss was so sure when faced with so many horses at once though! 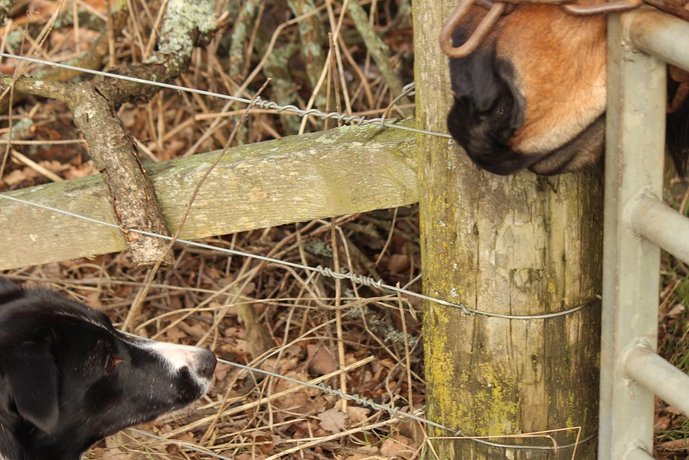 But we weren't there to stand around making a fuss of horses, so we tore ourselves away and got back to our walk, following the road down into Old Blair where there was one of the nice little footbridges crossing the road. 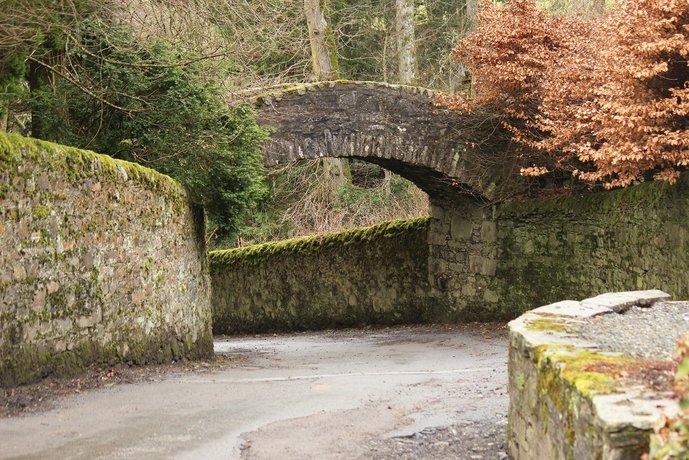 Our route led us under the bridge and not much further along the arrows directed us onto a track and away from the road. It was only a short distance until we reached the sign pointing towards The Whim, a folly, and we headed along to take a look. It's a bit strange, but then follies often are! 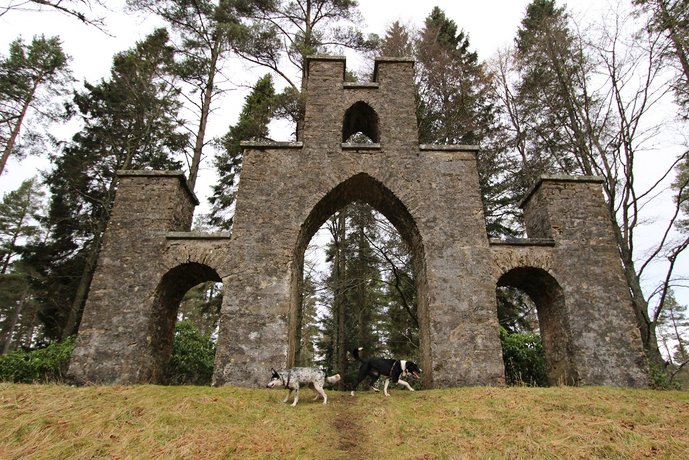 Back to the main track and we continued on through the woodlands spotting another pretty bridge over the water that was so clear and clean-looking! 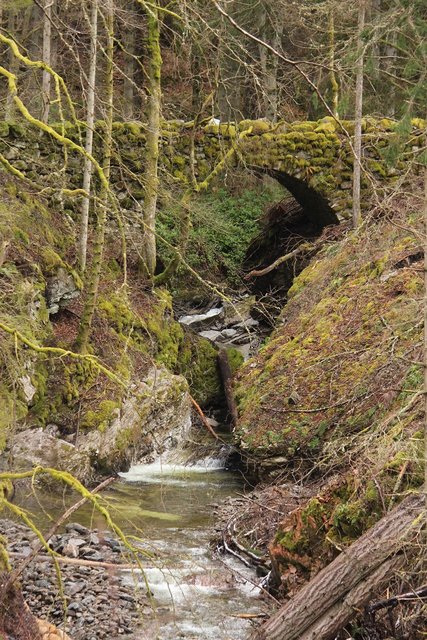 No crossing the bridge though, it was onwards on the main track and soon we were out onto the moorland. I'll add here that there are now no stiles at all to cross on this walk (as are described in the route description), they have all been replaced by smaller gates near to the bigger gates. Much easier! The path led across the moorland with the burn flowing below and I could see a white mountain lurking behind the bigger hills. 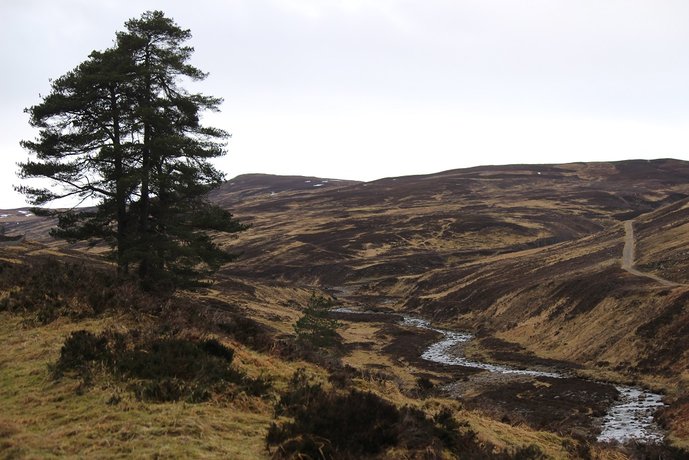 It had been cloudy up until this point, but the sun was making an attempt to break through the clouds every now and then. I did make the mistake of looking back though and seeing sheets of rain crossing the hills behind us... 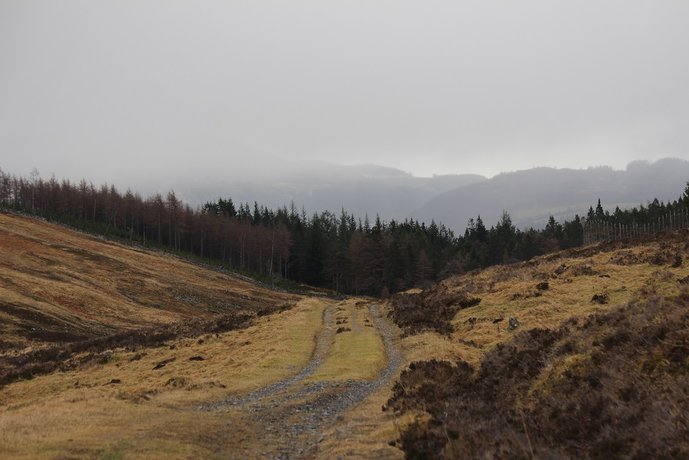 There was also a patch sweeping across ahead of us too, but aside from a bit of light rain we were staying dry and the rain soon moved off leaving the hills behind visible again. 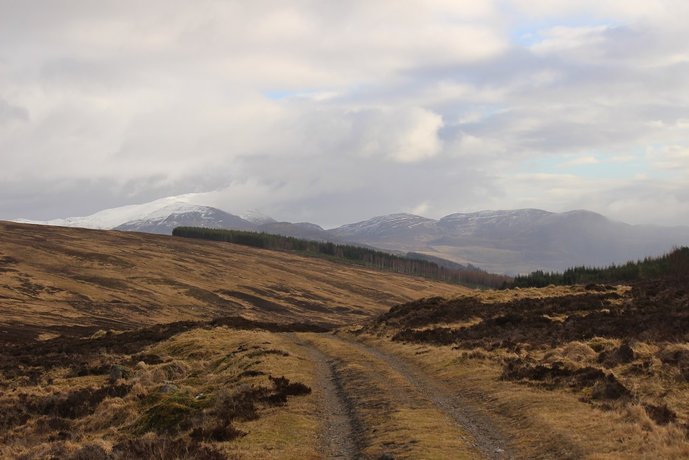 The dogs enjoyed themselves running about, though I do wish Moss hadn't decided bunny chocolate drops were a new delicacy! There was no one there, no sign of any deer or anything that could distract Moss (Millie knows better, Moss is still learning lol) and there is still another month and a bit before the bird breeding season starts so they could wander as they pleased. Not that they go too far, they do like to keep an eye on where I am. 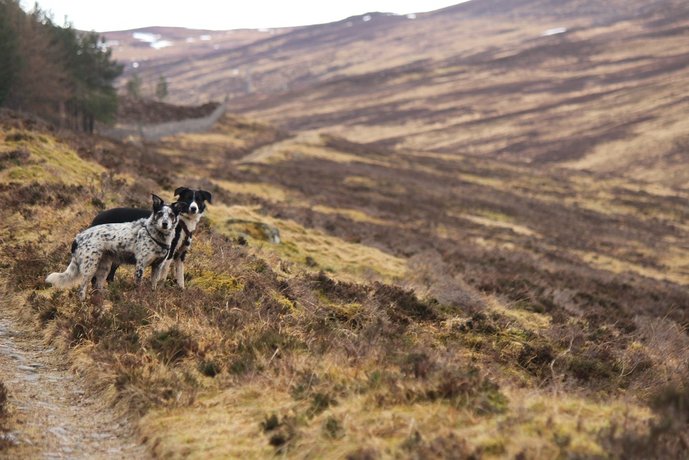 The moorland eventually turned back into woodland and we were back walking through forest. The occasional breaks in the trees gave glimpses of the surrounding hills, but most of the time it is just lots and lots of trees, and the dogs winding me up pretending they could see something when there was nothing there. There wasn't even many birds calling. 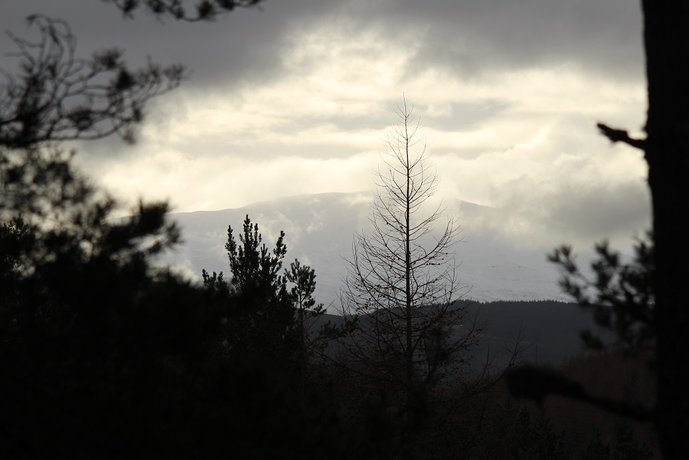 Tummy rumbling, I found a rock to sit on to have my lunch and the dogs got a little snack too. Millie sat by my side in case I dropped something whereas Moss decided to be a bit more anti-social and lie down much further away (she doesn't like the rustling noise plastic bags make). 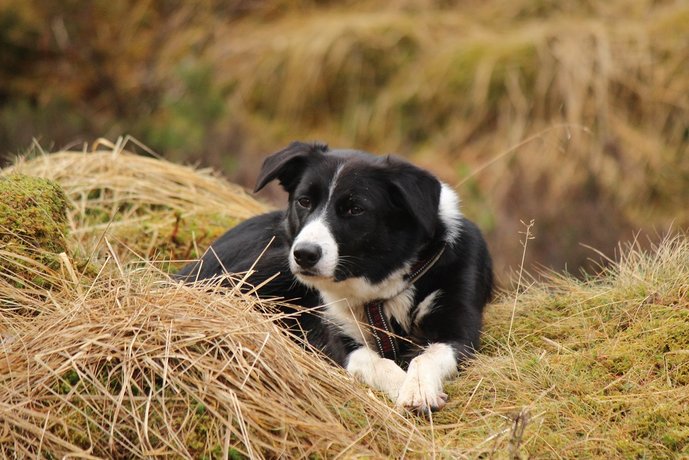 Of course, it was when I was finishing my lunch that the rain came on, but by the time I'd crammed everything back into my bag it had stopped again! But hey, I was ready to get going again anyway so off we set continuing on through the woods. I hadn't seen another person at all along the route, so the little orange arrow that appeared was a welcome sight, not that there was really anywhere we could have gone wrong but still, walking through seemingly endless trees it is nice to just get a bit of confirmation that we're on the right track! The path started to descend and the views started to open out a little bit towards snowy mountains against dark clouds. 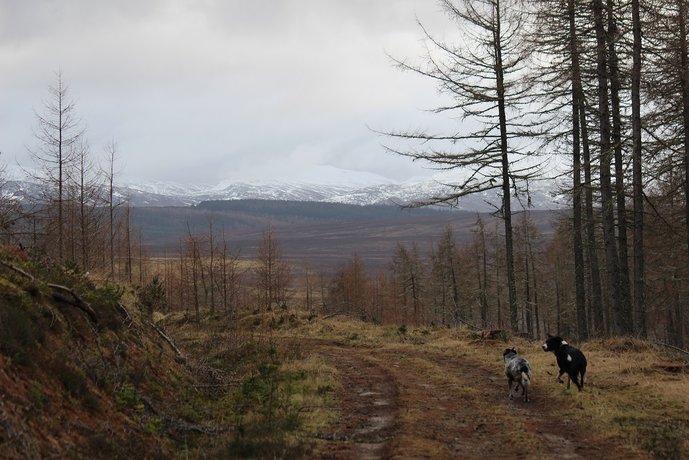 Then there were people! The ranger was out on the road digging a hole for a wooden post, Moss went over and got a cuddle, not bad for a dog who 5 months ago reacted to people as if they had rabies and gave them a wide berth! Stopped for a bit of a chat and then continued on our way through more forestry. Upon reaching a curve where the path split, I saw a sign pointing back the way for the Falls of Bruer. We must have gone right passed the turn off and not noticed! I stopped for a moment to decide whether to head back or not, and decided to just leave the falls for another day. Finally the forest was left behind us and followed the road with fields of sheep, cattle and horses either side. Those horses were busy feeding though and didn't want to say hello. Sheep meant back on lead for the dogs, though I don't think they were bothered as they were getting a bit tired at this point I think! A buzzard came flying across and seemed to deliberately go out of his way to disturb the jackdaws in the nearby trees, they reacted with lots of noise but didn't try any mobbing. 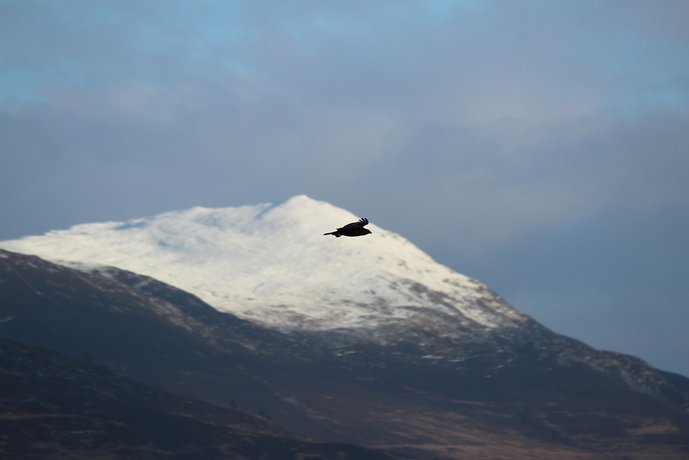 Where the road split, we turned off the estate (big sign saying not to go any further on that road!) and headed back up to Old Blair...and I made a slight error and continued straight up the road instead of taking the road to the right - oops! On the right road, our horsey friends neighed a hello (or maybe they were laughing at us going the wrong way) and we went back over to see them. So a bit more time spent fussing the horses before we said goodbye and headed back to the car, it taking us around 5 hours to do the walk including picnic and the time spent with the horses. I wonder how many other visitors they manage to distract? Re: Glen Banvie and Bruar Circuit

Great photos of the dogs. Love the equine/canine nose to nose one!

Re: Glen Banvie and Bruar Circuit

Moss actually touched the noses of several of the horses, unfortunately wasn't quick enough with the camera to get a photo! Maybe I'll have better luck next time