A Stunning Day above Glen Spean

A Stunning Day above Glen Spean


After a fairly non-descript and tiring out the previous day on Carn na Caim, I had arranged to meet ArthursEat (Calum) from the site for Beinn Teallach and Beinn a'Chaorainn. He'd had to bail a few weeks back due to snow and they seemed like a reasonably achievable round in winter conditions. The forecast promised clear skies and strong winds, and proved to be entirely accurate

I was feeling a touch apprehensive however, only managing one of the easy East Drumochters the day before was hardly encouraging, with a long-running knee problem also into the mix. However Saturday came, and the skies were indeed clear. Parked up at Roughburn, with Calum arriving shortly afterwards following a flat tyre nightmare. It was breezy and cold at the roadside, so we fully expected it to be wild on top.

The initial section is as described, follow the track for a while then branch off to an obvious, "somewhat" waymarked trail through the woods, whilst trying to avoid partially frozen bog and losing your eyes to rogue twigs and branches. After a few minutes of this, we emerged at the river, walked along it for a bit and started off up Beinn a'Chaorainn. We were soon joined by another walker, who's name I've completely forgotten (apologies if you're reading this, I'm atrocious with names)

Anyway, height was gained and soon fabulous views opened up towards Loch Treig and it's surrounding hills. 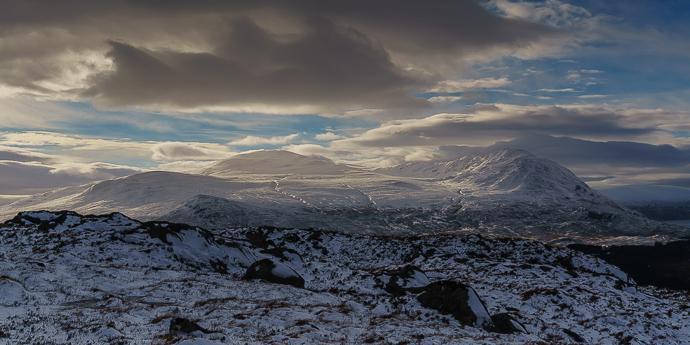 The way up was fairly pathless and fairly steep. 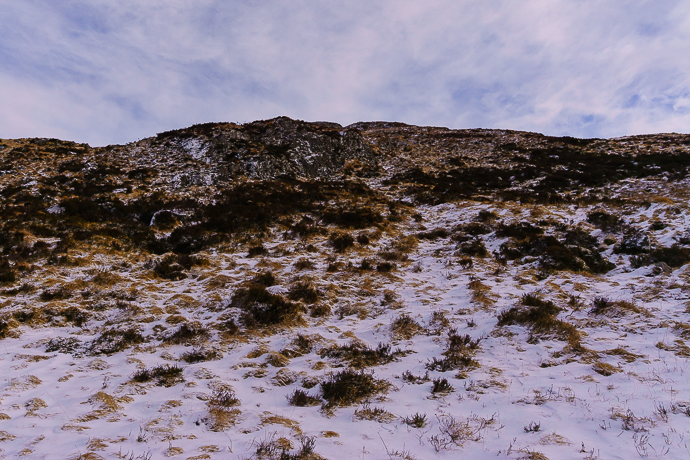 As height was gained, the views just got better. The winds also got stronger

There was a fair bit of face-stinging spindrift being blown about. We made our way beyond Meall Clachaig and plodded on up the snowy slopes. I was feeling it a bit and the ascent was a struggle. After a long grind, we gained the summit ridge. The wind gusts were at times ferocious. Making sure not to stray too close to the incredible cornices, we made our way to the summit, walking like a half-shut knife into the wind 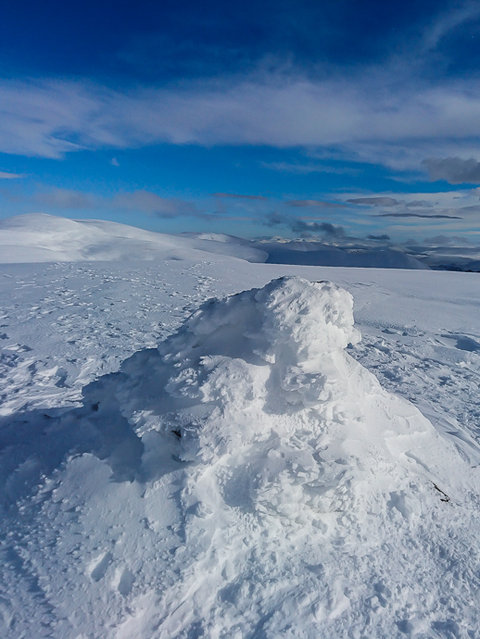 We dropped down from the summit a short distance to get a bit to eat. It was a bit surreal, we were sitting in a spot of flat calm, but all around the wind was whipping up mini-spindrifts, with some huge walls of it being blown up out of the corrie. I'd have taken a photo of it, but i couldn't feel my fingertips at the time.

The views remained awesome, especially to the south. The scene was a 360 of fabulous winter mountain views. We also had a good look at Beinn Teallach, once the highest of the Corbetts, now the smallest munro. Disappointingly however, we had to lose 400m+ of height to re-ascend a further 300m. 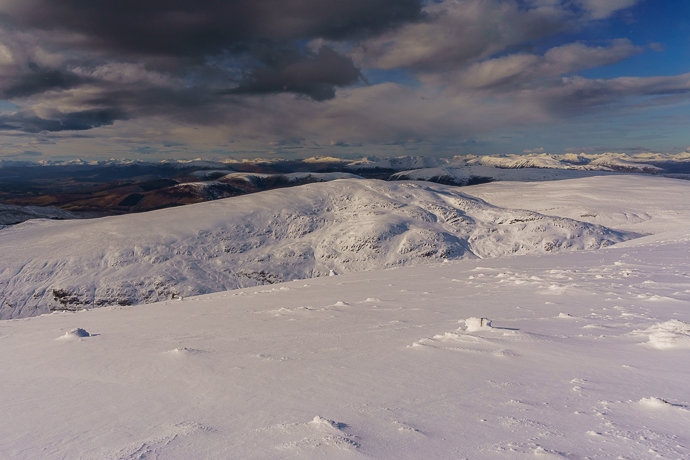 We dragged ourselves up, and began a long slanting descent to beyond Tom Mhor, bumping into a group from Sheffield on the way. After an eternity we reached the 615m low point and briefly rested. The long descent from Beinn a'Chaorainn Looking down the middle of the bealach We set off up through the crags for Beinn Teallach. This was the best ascent of the day, largely over firm snow into which you didn't sink, but still got plenty of traction. The ascent seemed quite straightforward and for a couple of minutes I thought I saw the summit. Unfortunately this was a spectacularly disappointing falsie

Eventually however the summit was reached by way of a slow trudge, frequently beset by strong gusts of wind. The views were just sensational in every direction. 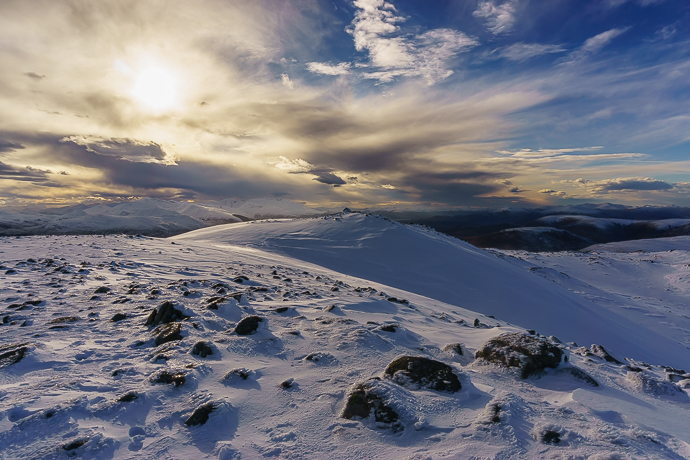 There were two cairns of equivalent looking height so we visited both, before beginning the long walk out. The descent was a pleasure as we were continue walking towards the glorious views of the Loch Trieg hills, and chatting about football. Yet another shot of Loch Trieg

We walked easily off the gentle slopes, followed an icy track and safely negotiated the stream-crossing. There was a minor faux-pas in the woods, but we soon rejoined the track and were back at the cars in good time.

The conditions had been testing but the views were sublime and the company great. I returned to the bunkhouse for a lukewarm shower, highly unhealthy tea and had a couple of drinks with fellow residents, members of the Cioch Mountaineering Club, a fine group of people to round off an excellent weekend.

Big thanks to Calum for his company and the other chap who's name I've shamefully forgotten.

Good report and great photos. Great day out and thanks for the company Jupe. Good luck with the peg!

you've got some rather impressive sky shots there - cheers

you've got some rather impressive sky shots there -
cheers

Arthurs Eat wrote:Good report and great photos. Great day out and thanks for the company Jupe. Good luck with the peg!

Thanks Calum. I'll give you a shout for another walk once I'm ready for the hills again

"Stunning" doesn't do your pix justice at all. Absolutely magnificent, beyond words indeed...