Snowbody does it better...

Snowbody does it better...


After our disastrous attempt 2 years ago, we vowed only to reattempt when the sky was blue and the ground was a solid blanket of white. Not even St. Valentine's day responsibilities could stop us scratching this itch...

We agreed to meet at 'Brian's Mobile Cafe' at 08:00, for some partially cooked square sausage and cremated tattie scones. Washed down with a few cups of coffee, it was going to be foolhardy to be down wind of this group of strollers. We headed off a little after 09:00, with the weather forecast looking to be holding up: Despite the frozen ground, you could sense the bog trying to break through, but the early(ish) start meant that the footing was more or less firm. Soon we were at Brian's arch nemesis, the deer fence stile!!! However, there was to be no Tom Daley impersonations this time round, as he overcame its menace like a pensioner try to get on the down escalator at Buchanan Street underground. With the second, less daunting stile soon behind us, it was time to get our heads down and break trail in the very decent blanket snow. The sun was beating down, so it was a little stop/start, as we dropped layers. However, as we reached the South Top, the wind picked up again and it was time to chuck everything back on again. 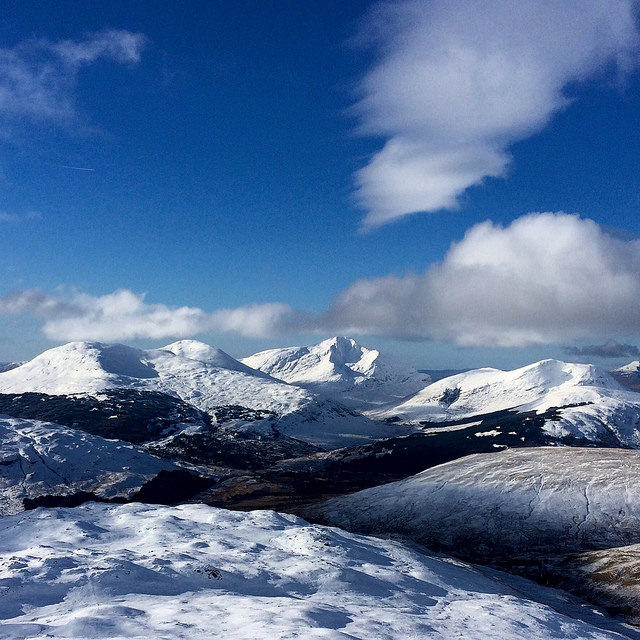 As we crossed over to the main summit, Stew took some time to provide us with a textbook tutorial in avalanche risk assessment, before making the final pull to the top. The pork & pickle pies and Reeses Peanut Butter Cups were consumed rapidly, as the wind chill was bitingly cold, and it was down and back over the ridge at a trot. Despite the scenery, the big mitts were on and the camera was put away. A steep and slippery descent in the snow was soon followed by the re-emergence of the bog lower down, as the days sun thawed the previously frozen ground. It was almost 'taps aff' by the time we reached the farm, and it was good to get changed back into our civvies for afternoon tea at 'Brian's Mobile Cafe'. With memories of the previous debacle now banished, it was time to head home. Re: Snowbody does it better...

My goodness you have handsome pals....

Re: Snowbody does it better...

I would be surprised if you were granted future entry to the mobile café... did you bring provisions or just turn up and hope for the best?
Great report though