Beaten by a Corbett- the day I had to turn back

Beaten by a Corbett- the day I had to turn back


Its been ages since I had climbed a hill in Scotland (the last mountain had been in Sri Lanka in January) and I was looking forward to get out in the snow. I had been so determined to get out that particular Saturday, that I never really looked at the weather forecast

and when I opened my curtains Saturday morning I was slightly surprised when I saw raindrops.

Who cares I thought I was going out!

I had planned to do one of the close by Corbetts and looked forward to a drive which would take less than 2h each way.

Driving along Loch Lomond it was starting to snow and by the time I parked my car close to the Rest and be Thankful I stepped out into a mini snow storm.

The path up the mountain was barely visible, but the mountain was pretty straight forward (in theory anyway) . Following some footsteps I started the climb and oh how great was it to be back into mountain land

The path was climbing steeply and at times it turned into a sheet of ice. The views back were pretty stunning and between heavy snow showers it even looked as if the weather might change for the better. Fingers crossed I thought. 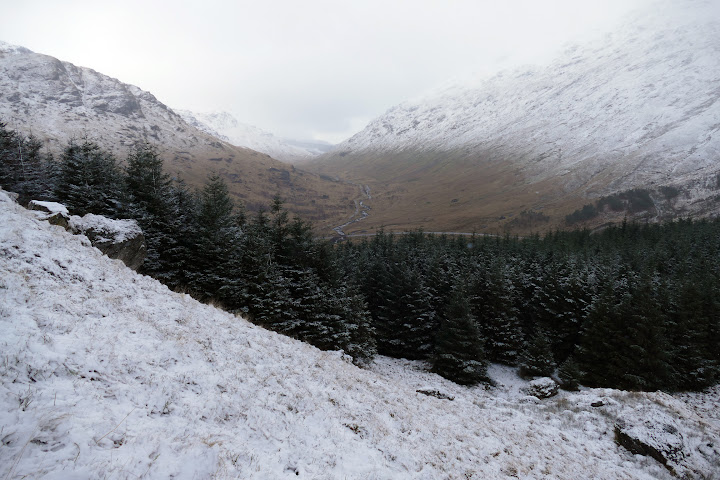 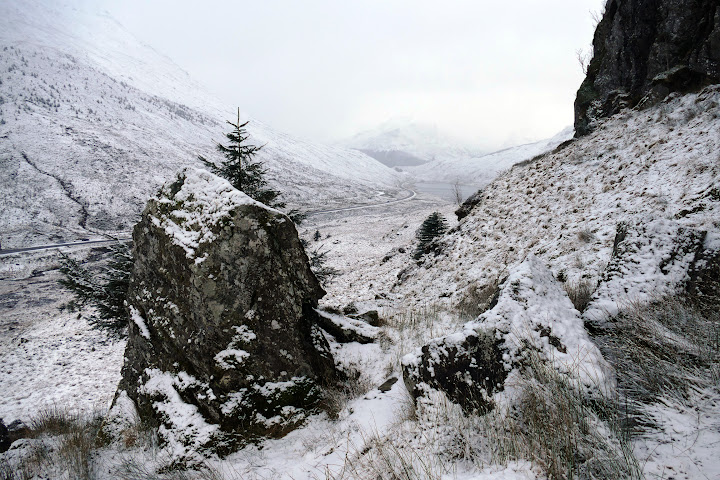 Looking back towards the road 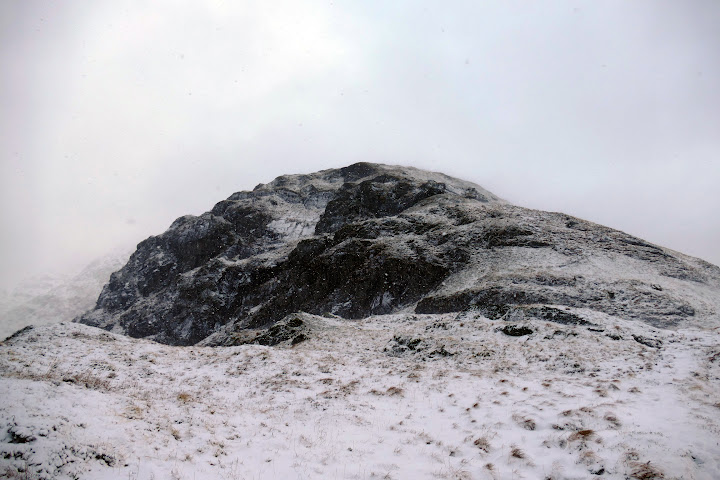 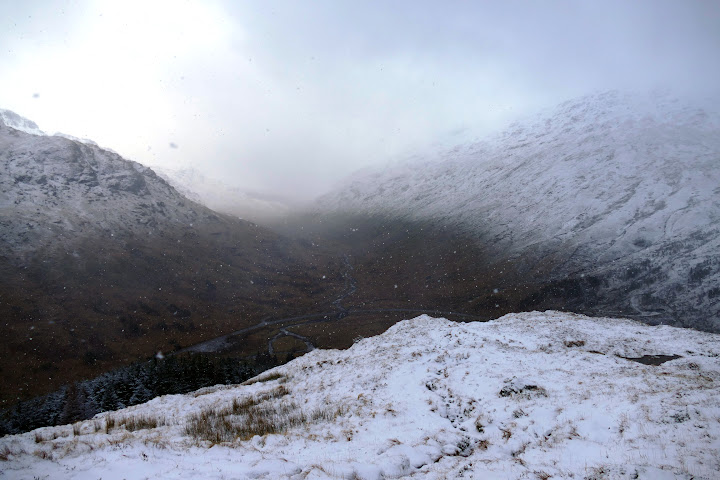 For the first hour I made good progress, but the higher I climbed the worst the wind got and I was feeling the wind chill badly. Stopping for water break, I got out another layer of clothing…not easy as the wind nearly ripped my jacket out of my hand. Two other walkers who had been walking ahead of me suddenly stopped and returned towards me. Curiously we exchanged some greetings when our paths crossed and they seemed concerned when I told them that I would be walking on.

Turning around I watched them descending, while the wind was getting stronger and stronger. The weather also closed in and by the time I reached the 637m mark it was snowing heavily. The snow hit me like needles and walking without a ski mask would have been impossible. The path, now hardly visible, seemed to curve around the sheer rock face in front of me. Walking along I reached a 50 degree vertical slope. The snow was still soft enough, so I did not bother with crampons, but I could have kicked myself for forgetting my ice axe

…even for my liking the slope was a bit scary.

Walking slowly I soon stood in the middle of a steep slope of snow, which turned more and more into ice. Oh God I needed my crampons as in now! Looking back I did not fancy turning around, but walking along was impossible.

Looking up I saw a small rock outcrop that would need to do. Digging with my hand into the snow I climbed on all fours towards it and manged to dig out a flatish area to sit. Far from perfect as there was hardly space, but I managed to put my crampons on and swore to myself to do this earlier next time. With crampons on, I felt much safer and ignoring the steep slope to my right, I climbed up towards the 764m mark. It was a steep and a white out was raging around me. On my hands and feet I climbed up and sat on what appeared to be a ledge. I was really disorientated and stayed crouched down until I was able to see again.

Just as well as I was only a few meters away from ~300m drop.

I have had some scary moments on hills, but this Corbett proved to be something completely different.

Checking the map I got my bearings again and realized I was on the ridge. With no shelter the wind hit me with full force and I was pushed all over the place and walked like a drunk. I made really slow process and finally reached the 800m mark, which is the start of the last steep climb. By that time I was not able to stand up anymore and was thrown to my knees numerous times. Waiting for a while, I tried to stand agin , but was thrown back down. I tried to crawl and looking up the steep slope ahead of me, I suddenly came to a halt. What was I doing? There was no visibility, I was in the middle of a snow storm and I was not able to walk because of it. Why on earth would I risk to get blown off a cliff edge? To touch a cairn in white out conditions? I would not proof anything, apart from stupidity!

Moving back I suddenly remembered my camera and that I should at least try to take a photo. Crouching down I lay the backpack in front of me. Seconds later the wind picked it up (all 8 kilos of it) and flung it forward towards the cliff edge. With a belly flip I jumped forward and landed flat on my backpack. Woah!

The walk back was just as difficult as the climb had been and without my GPS I would have been totally lost in numerous white outs. Half way down the mountain the sky cleared a bit and the visibility got pretty spectacular. Looking back I was tempted to return, but dropped the thought when the wind managed to rip my neoprene cover of my camera and all I could do was wave it good bye, while the wind lifted it higher and higher up in the sky on the way down the mountain.

I reached my car about an hour later and looked up at the mountain which was now in partial sunshine. What a day it had been and I think I better complete the easy Munros....before I turn to the dangerous world of Corbetts 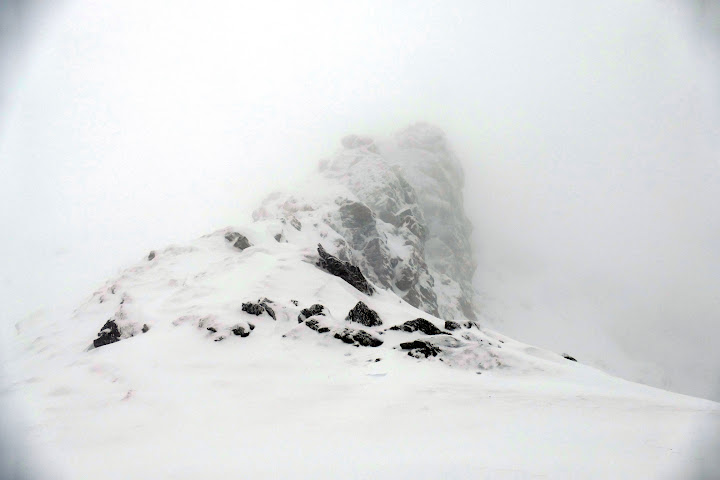 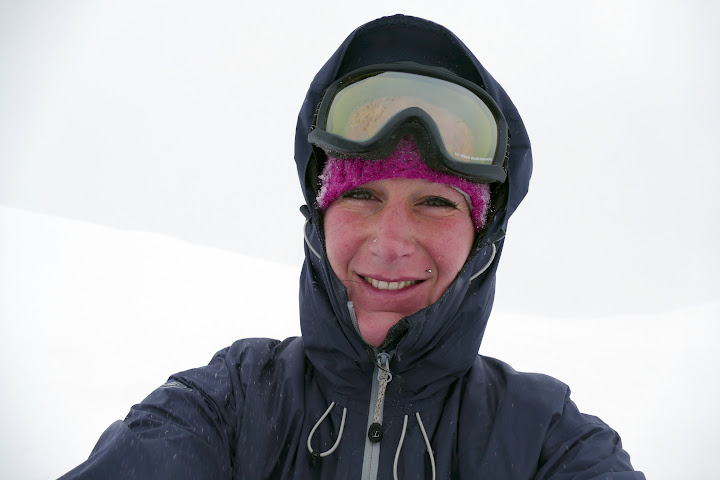 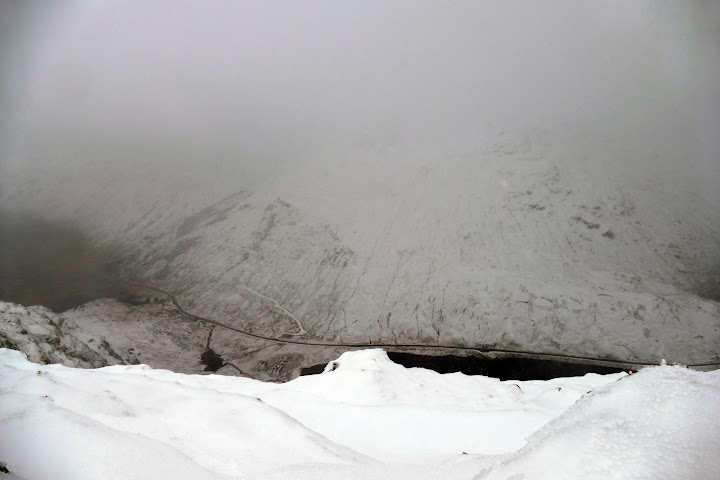 The view after the white out had passed...just as well I did not walk on 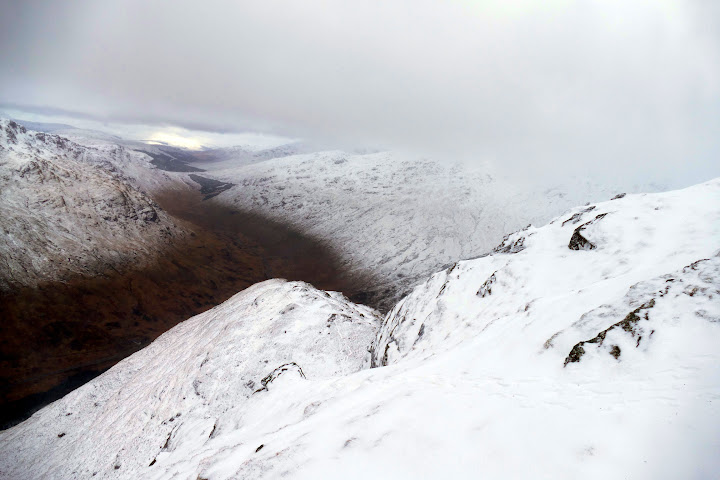 Views are getting better 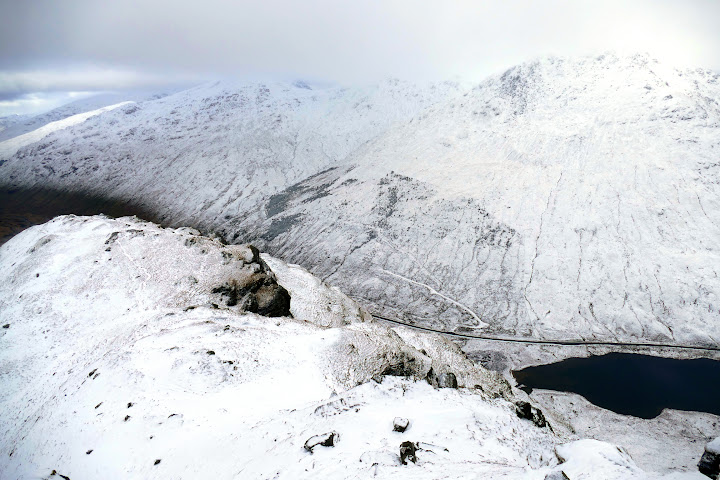 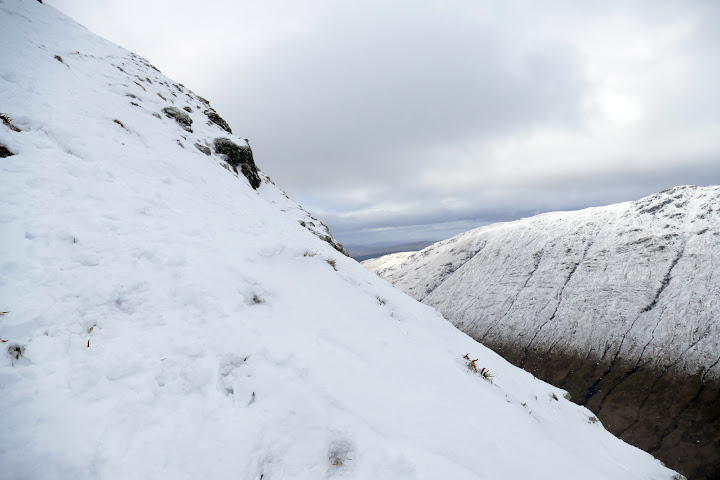 Its a steep wee mountain 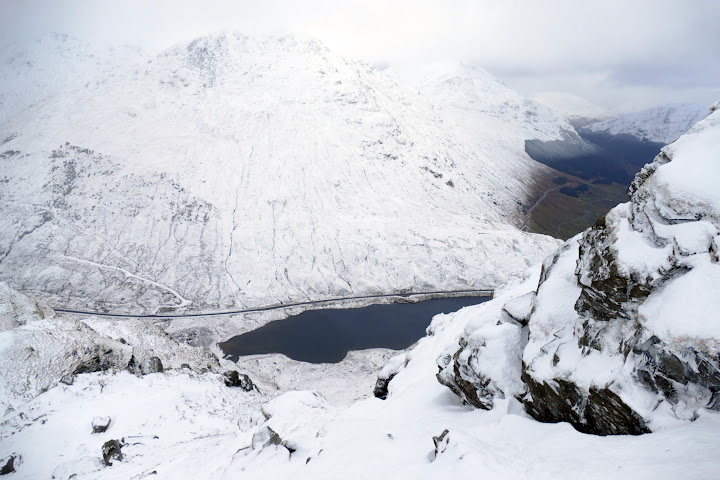 Towards the wee lochan 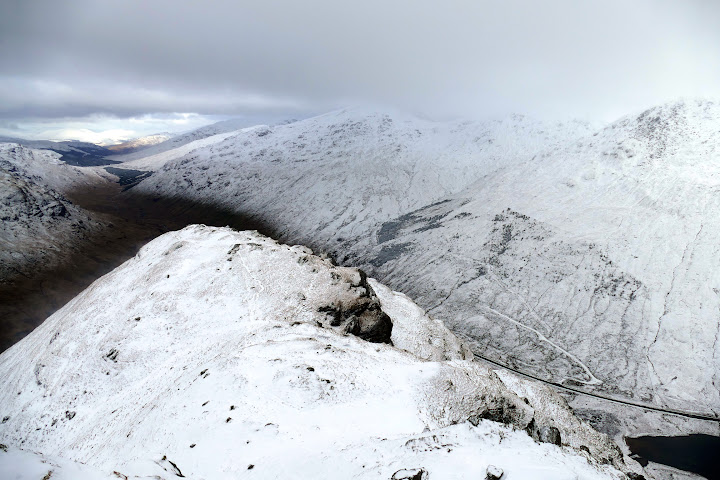 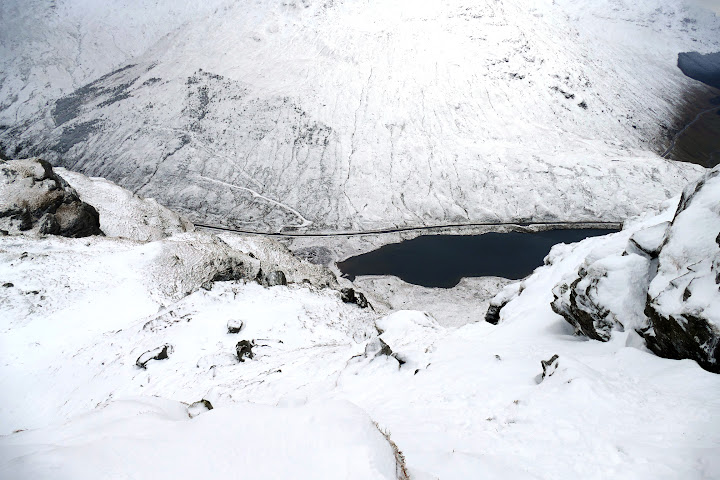 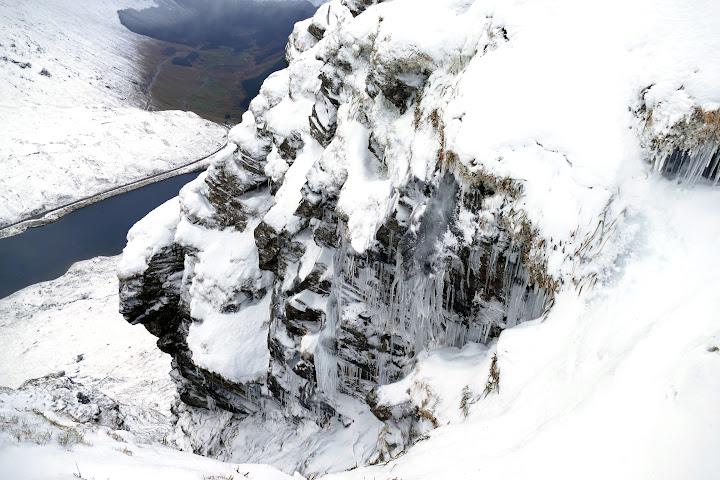 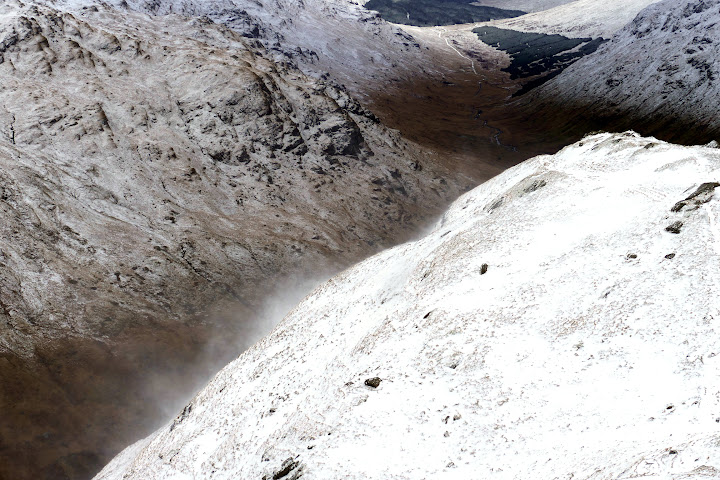 The general direction my camera cover flew towards 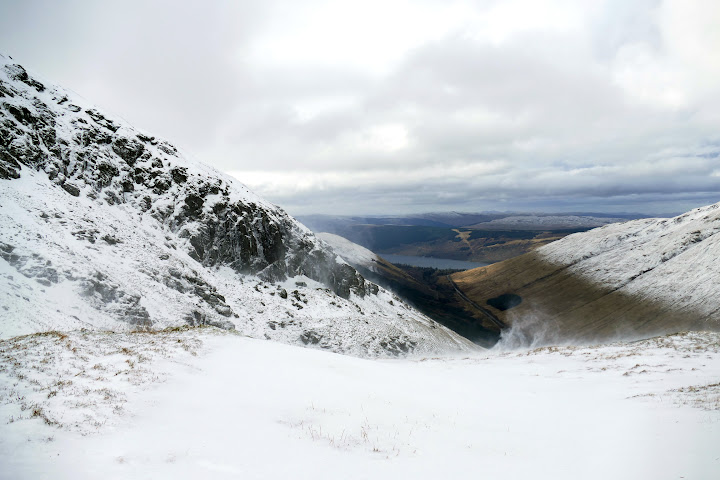 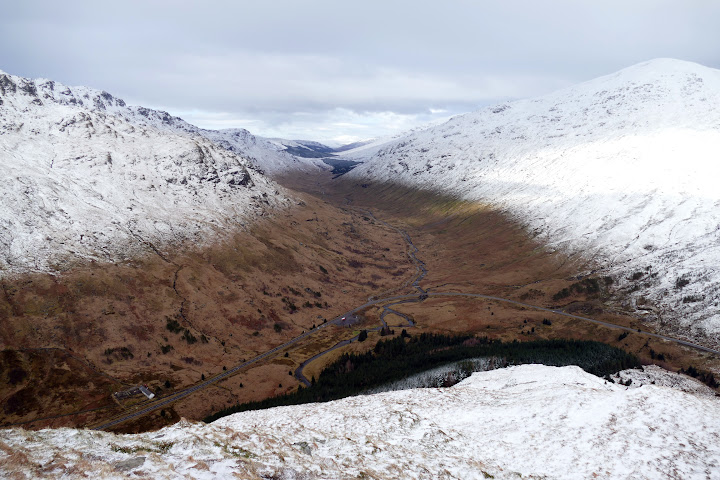 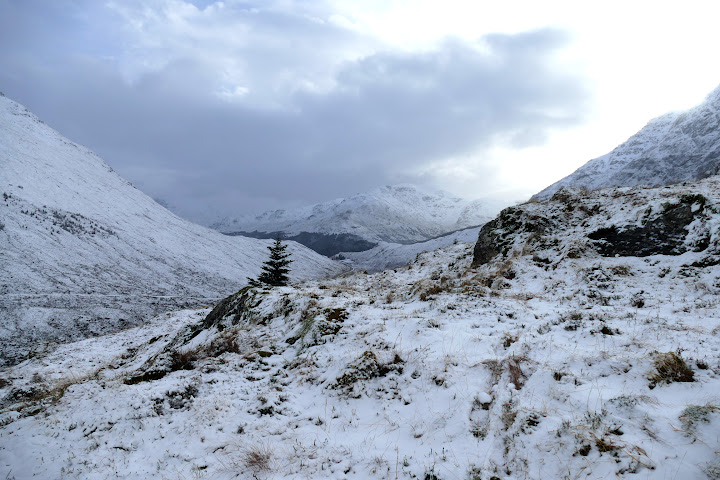 Much better weather towards the end of the climb

Jeezo ur some lady

Terrifying report but amazing photos! Glad you made it back down in one piece

Wow, quite an adventure! Glad you saw sense, and you're right that there is still a real satisfaction about battling hard, but ultimately admitting defeat and turning around.

Wow - tough stuff! Sounds like you made a very good decision to turn back.

I hope it's not quite as dramatic for the last week in Feb when I'll be up in God's own country for the first time since last September...

Was it chillier than Sri Lanka??

This is definitely one of my favourite hills

Get it on a good day and it gives one of the best short hill walks out there. Having said that it had me turning back one winter in what sounded like similar conditions to yours - heavy snow and strong winds. Then again, I decided to turn round and drop down a tad sooner than you by the sounds of it

Sounds like an epic, turning back is a tough decision to make. The Arrochar Corbetts aren't poor relations of the Munros, this ones a cracker.

Thanks for posting, been itching to do this in winter for a couple of years now. Looking like my plan B next week.

It's a cracking hill. Very accessible and pretty straightforward in benign conditions, but it just shows how different [and potentially frightening and dangerous] it can be on Scottish hills in winter.

Glad you got back safely.

In light of what's happened in the last couple of days especially.

But you did the right thing, taking stock and then decision time

Surprising the cloud in your pics as it was blue skies further north last Sat but the wind was evident for sure.

That was a gripping read ML - into the maelstrom! That final ridge to the summit looks well scary in those conditions

- I admire your attitude on finally deciding to turn back. You went as far as it was humanly feasible to go and there's no failure in admitting when you've reached that limit. The hills sometimes allow us to climb them, if we're lucky; we never 'conquer' them.

Crikey. Most reports I read on here make me wish I was there. Reading that actually made me (almost) glad to be 700 miles south of where you were

Epic stuff, it's the kind of thing I hope I only ever read about. Even so, some of the photos are cracking shots so it was worth it I reckon.

Hi I just wondered do you alway climb all these hill yourself ?

@Gomez: I think I have climbed 75% of all hills myself