The other half and I had been discussing doing some long distance walk's for some time. A small weather window had appeared for the middle of the week, and with us both being off work, we decided to have a go at the Moray Coast Trail.

Our intention was to go fast and light, completing the trail in two days, spending the night at a B&B in Lossiemouth (approx. the half way point)

I approached this walk with some scepticism as to whether i would actually enjoy it, it maybe acks the grandeur of some of Scotlands more famous trails and we would always gravitate towards the mountains rather than the coast.
I was proved wrong, we both thoroughly enjoyed the two days of scenery and coastline Moray has to offer


The Alarm clock was going at a very early hour in order to facilitate us getting the 0709 train from Inverness station to Forres. Thankfully we wrenched ourselves out of bed, got ready and left the house with enough time to call in at mcdonalds (it is the only Inverness eatery open before 7) before boarding the train with our greasy double sausage egg mcmuffins.

We started walking from forres station at about 0740, with a weather forecast indicating that the weather will be getting better as the day goes on.
The first stage of the MCT is along tarmac road's (although on the pavement) all the way to Findhorn. We passed by the edge of Kinloss and the old Air force base. I believe now that it is now an Army Barracks and a relief landing site for RAF Lossie but the base seemd very quiet with little or no activity defunct Nimrod near the road at Kinloss

We arrived at Findhorn at about 0920 looking for a place to get a bacon roll, but alas both the villages cafes were not open unitl 1000; we decided to wait and passed a little time walking around the bay. We enjoyed our Bacon rolls before commencing the relatively long stretch to Burghead. Once leaving Findhorn and walking round Burghead Bay the trail is much more enjoyable. Initially the trail follows the dunes and the sand cliffs above the beach, but after few Km the path starts going through Roseisle forest.
Due to forestry commission works there were a number of ever more zigzagging diversions in place, so we descended down to the beach and walked along it until we arrived at Burghead. There is a number of World War II pillboxs and coastal defences all along the beach but Hardly a soul was on the beach giving us some feeling of remoteness (I assume it is a lot busier on this nice beach in the summer!) 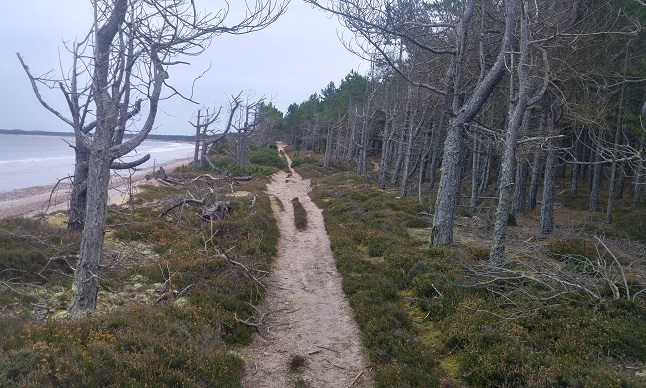 We stopped for lunch and a couple of beers at the Bothy Bistro in Burghead, which provided us with enough sustenance to continue on for the next section to Hopeman. This section is walking on Tarmac on the course of the old Railway Line, although it does have small cliffs and nice views to the coast ahead,

The section from Hopeman to Lossie was by far the best of the day. Initially walking high on the cliffs before walking on the Lossiemouth beach for the final few Km's. Looking back at Hopeman and its Colourful beach huts Lossiemouth did not have many places to eat but we had a very good Indian meal at the Tandoori restaurant, followed by a few drinks at the Beach bar, which was surprisingly busy for a midweek night.

We woke up again early, this time to blue skies and bright sunshine
The next leg of the walk round to Kingston started on Lossie's really nice East Beach. After a couple of Km's the beach becomes more stony and the trail follows the foreshore, once again passing masses of World War II defences. As we approached the Binn Hill firing range we could see no red flag, but the alternative route around the range seems to be well signposted. We approached Garmouth and Kingston around midday, it is surprising that although both the villages are quite a susbstantial size, neither have a shop and only Garmouth has a pub/hotel which is only open in the evening during the week. The path between the two villages gains a little elevation and has fine views of the coastline ahead 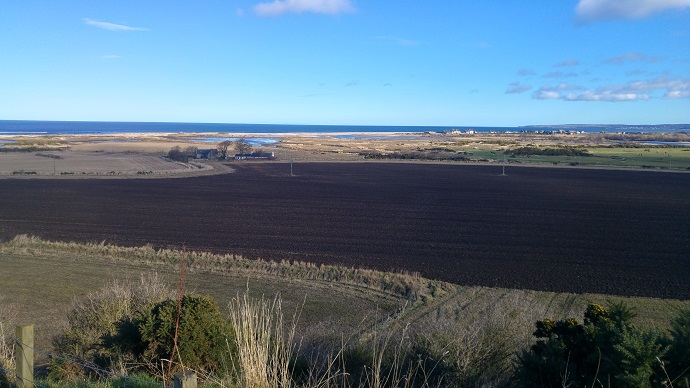 We decided to press on towards Spey Bay and Port Gordon to get some lunch, but this was not to be. On leaving Garmouth we were approaching the Spey Viaduct only to find that it was closed for construction work. Not sure if this was due to the floods a few weeks ago or whether it was routine maintenance. It is closed until the 6th of March but there is a diversion in place. The diversion is around 10km all the way upstream to Mosstodloch.
10 Km extra was to much for us to be able to finish the trail with daylight, (and feet in one piece) so we decided to leave the last remaining section for another day and returned by bus to Elgin and a train home to Inverness.

I approached this walk with some scepticism as to whether I would actually enjoy it, it maybe lacks the grandeur of some of Scotland's more famous trails and we would always be inclined to walk in the mountains before a coastal stroll
I was proved wrong, we both thoroughly enjoyed the two days of scenery and coastline Moray has to offer and found it good preparation for trying some of Scotland's other long distance trails later in the year.

Thanks for posting this and I hope you get to finish the route later in the year.

I'm hoping to do this walk this year, I know the area really well but have never walked any part of the trail.

I did this walk nearly 3 years ago, but did it in reverse and starting at Portsoy. The coastline between Cullen and Portsoy is not part of 'the way' but well worth the extension if you have the time 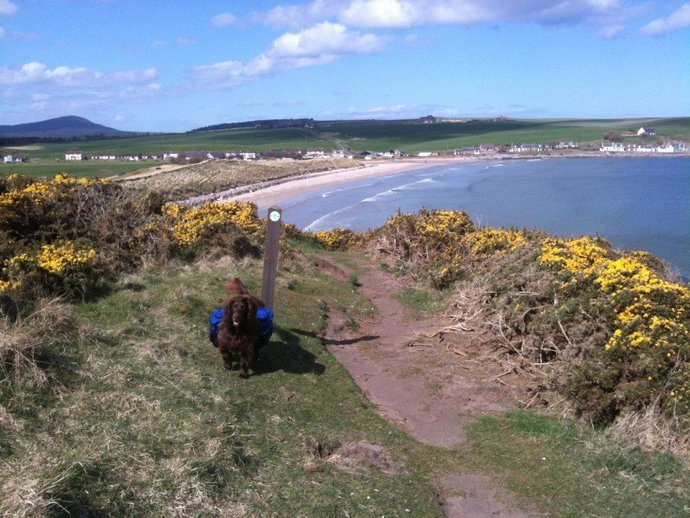 auzbauz wrote:I did this walk nearly 3 years ago, but did it in reverse and starting at Portsoy. The coastline between Cullen and Portsoy is not part of 'the way' but well worth the extension if you have the time

Nice photos auzbauz. Will bear that in mind when we go to finish it in a couple of weeks, looks like it would make a nice full days walk from Garmouth to Portsoy.