WH states that the "extremely fit" can manage this epic 22.5 miler in a day. We have a friend who runs desert ultra-Marathons for fun. He completed the Pennine Spine Challenge. He runs in excess of a 100 miles each week and climbs mountains with crampons, ropes and proper stuff.

He is "extremely fit".

We are just "fit", so having already been battered and blown about on Braeriach a month ago, we opted to plot a route designed for "fit" people to take on the remaining three Munros (Cairn Toul, The Devil's Point and the Angel's Peak) in a single day.

We opted to start from the Linn of Dee on a 22.5 mile route but minus mighty Braeriach (completed a month ago starting from the Sugar Bowl).

Our epic day started badly when 20mins into the car journey, the Hubs realised that he'd left his waterproofs at home.
"Just leave it, carry on. I'll do without" he said (like it was a Sunday stroll).

Headstrong wife that I am, I took no notice of him and turned the car around to begin the journey to retrieve the coat.
"You'll thank me for this later" said I and of course I wasted no opportunity reminding him what a wise and lovely wife I am when the first heavy shower hit near the base of Carn a Mhaim. 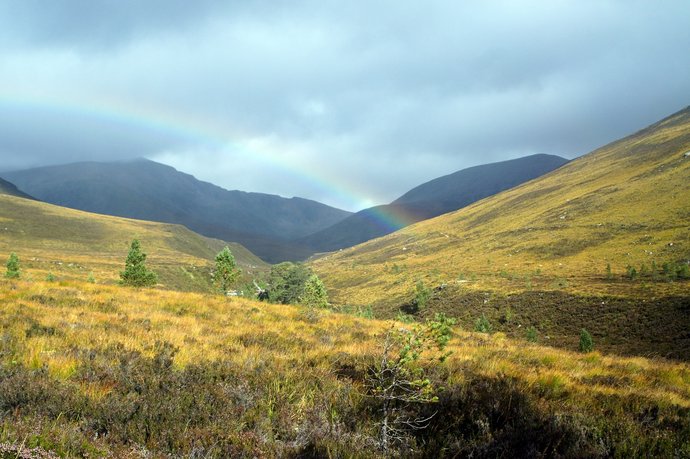 Rainbow near the base of Carn a Mhaim. Great big shower had just passed through. Hubs glad that we turned back for his waterproofs.

As a result of the "waterproofs incident" we started our walk at 10:15am (a bit later than we'd have liked). However I had my head-torch (just in case).

We opted to bike the first part of the walk to shorten the journey time. We're not brilliant bikers but we managed to knock about an hour off the overall time. We biked past Derry Lodge and over the newly constructed bridge and left our bikes at the point where the Luibeg bends around to get very close to the path amongst a copse of trees. This was about halfway between Derry Lodge and the Luibeg ford.

Our route took us over the Luibeg ford (on foot now) and it was straightforward (there's always the bridge further up if the Luibeg is in spate) and the clear track skirted the bottom of Carn a Mhaim before turning north to join the Lairig Ghru. 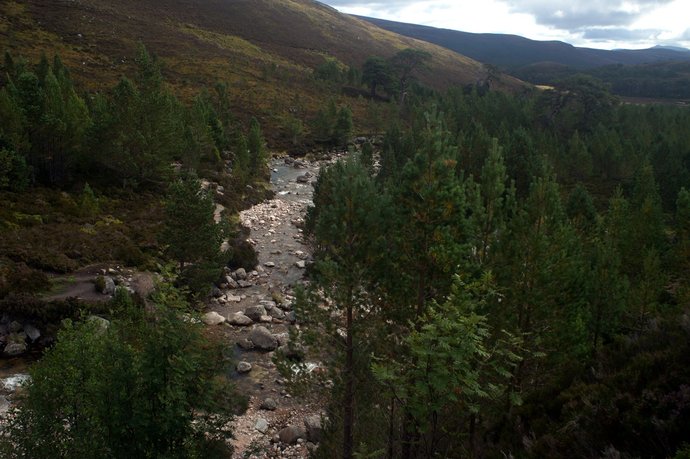 Forded the Luibeg burn here. Not in spate; no probs.

The views at this point were spectacular especially the impressive rocky dome of the Devil's Point. 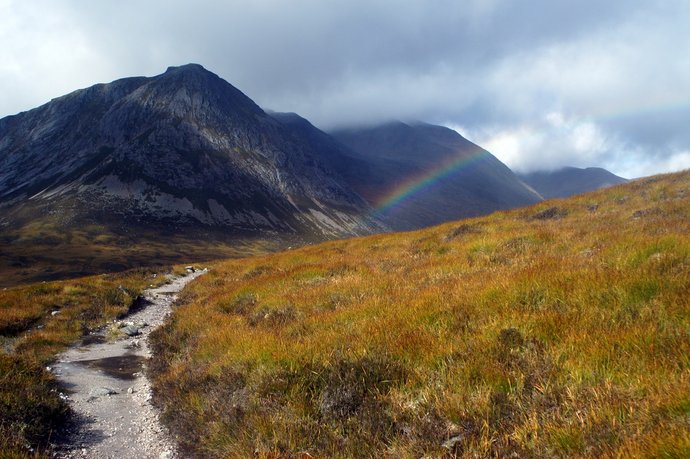 Another rainbow and the dramatic Devil's Point comes into view 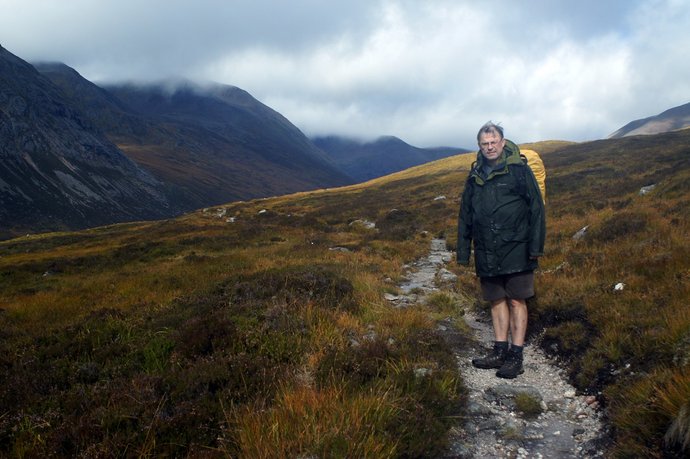 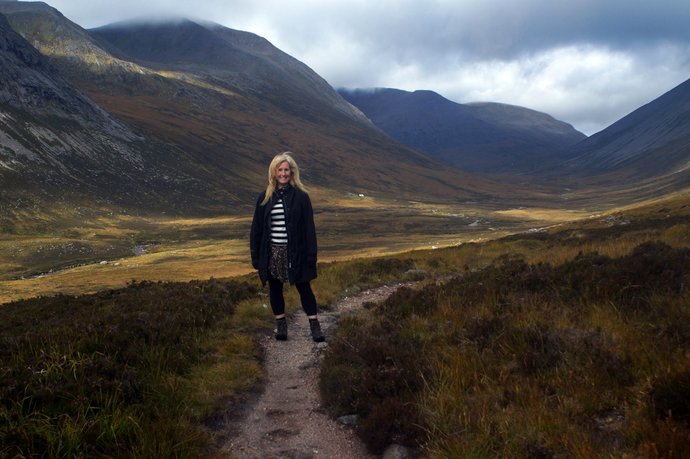 On the Lairig Ghru

We headed for the Corrour bothy and sat on its steps to eat some chocolate for much needed energy before tackling the steep side of the Devil's point by means of a clear path. 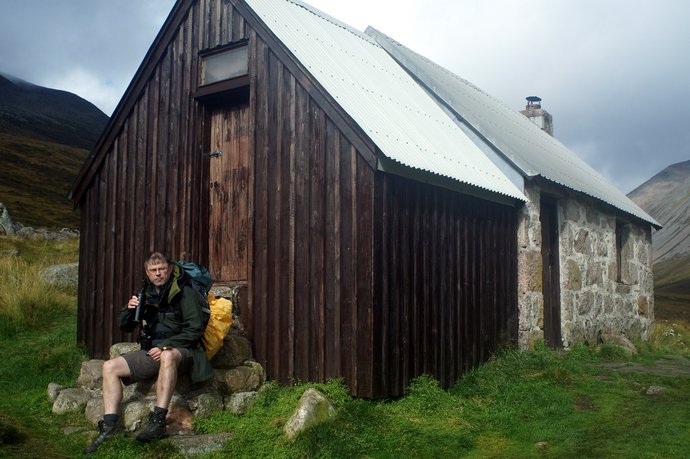 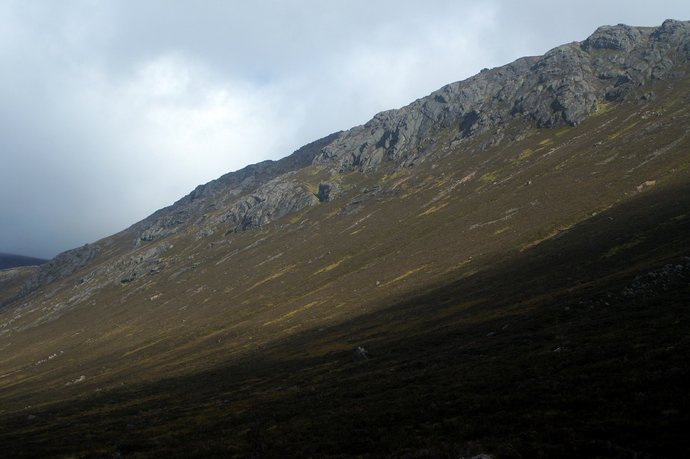 East side of Carn a Mhaim as seen from Corrour Bothy 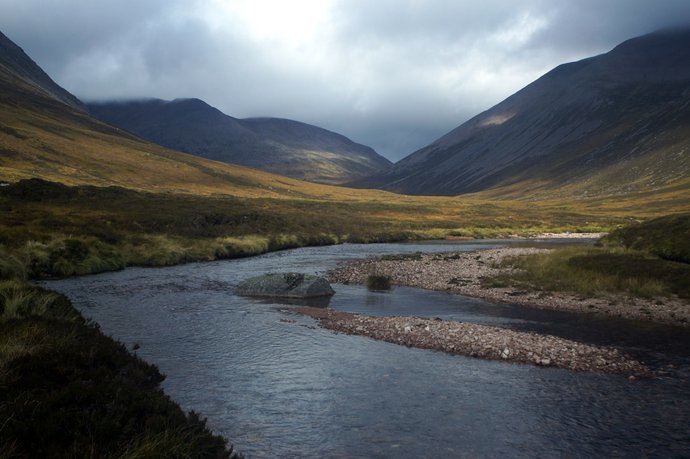 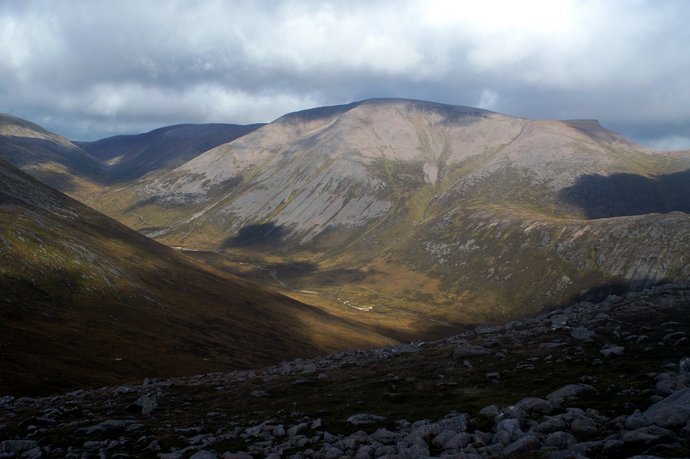 The river Dee with Ben MacDui

The rapidly ascending path followed the Allt a Choire Odhair which waterfalled over the rocks in places, adding to the drama.

At the point where the path crossed the Allt a Choire Odhair, just before it got really steep, we opted to stay on a smaller track on the left hand side of the stream.

Not our best move as it turned into more of a crawl 'n' haul than the steep walk that the nicely zig-zagging path on the far side of the stream would have offered us.

After crawling up onto the bealach we turned SE to detour to the summit cairn of the Devil's Point. This was very tame as far as summits go but at least from looking up at the Devil's Point from the valley floor below we can smugly say "Yeah, climbed that" 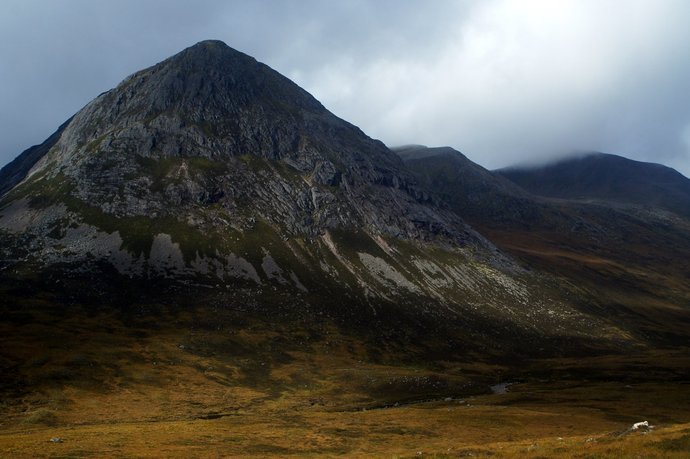 The rather spectacular Devil's Point.

Posed for some summit piccies, had a quick lunch before a dark rain cloud blew in with nasty icy things in it and then back down the way we'd came. Munro No 76 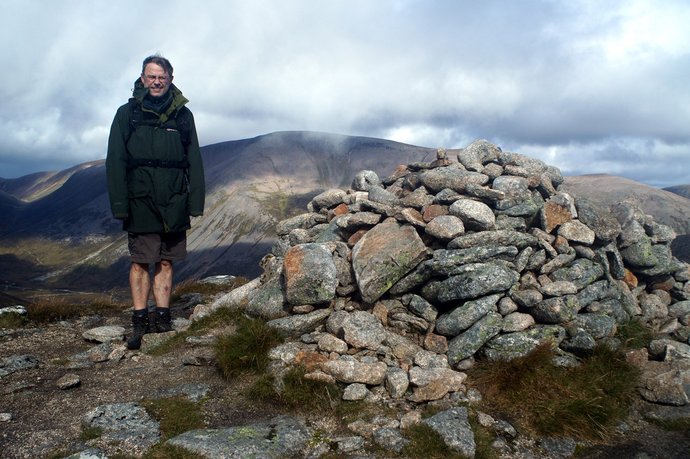 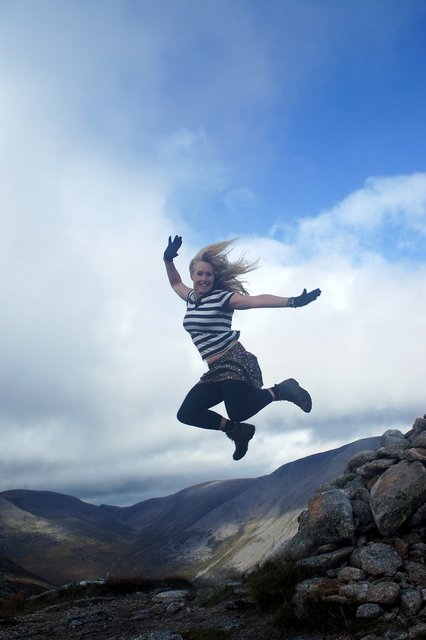 Retraced our steps back down to the bealach and then followed the path N up the steep slope towards the summit cairn of Stob Coire an t-Saighdeir. 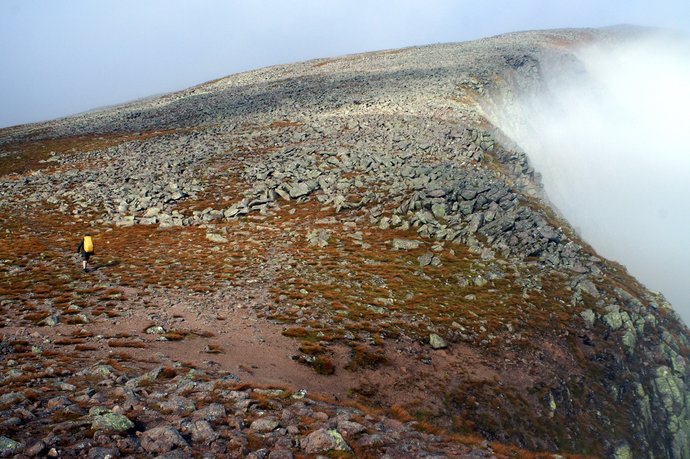 Stob Coire an-t-Saighdeir.....why couldn't they call it "Bob" or something simple? 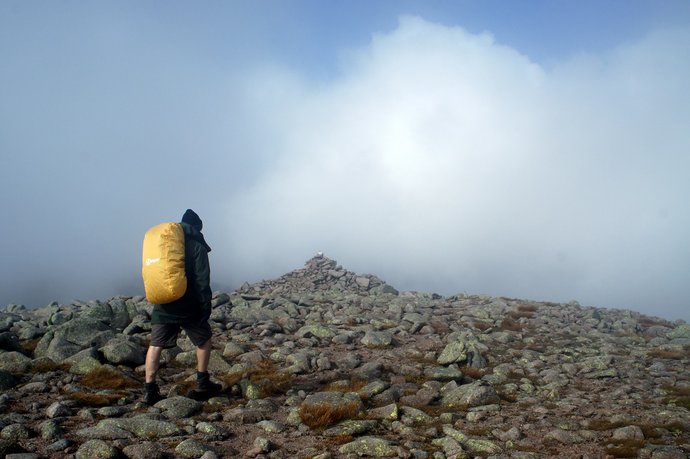 Continued onwards downhill and then steeply uphill to the rocky cone-shaped summit of Cairn Toul following the corrie rim.
So glad we left the dog at home as there were shin-splitters in abundance and the only thing worse than shin-splitters is WET shin splitters. The dog's paws and rocks are not a good match. 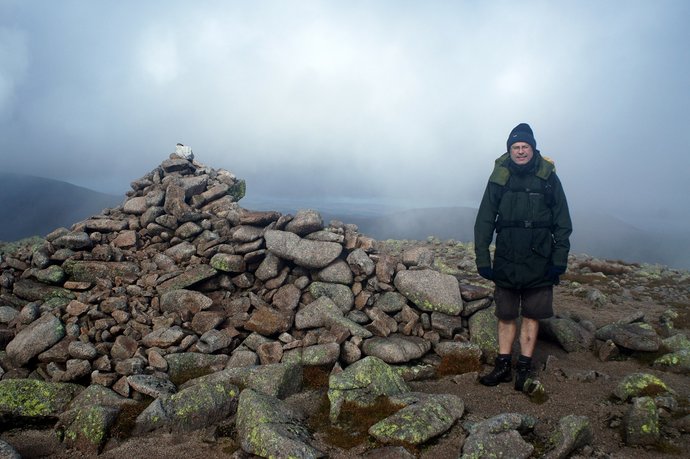 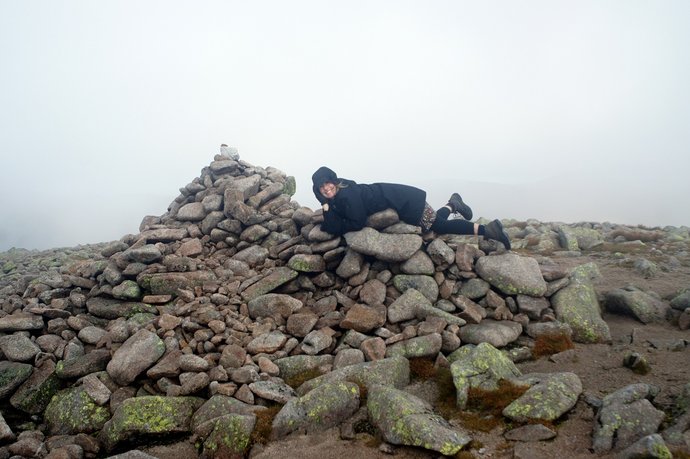 All limbs intact after making it through the shin-splitters. Cairn Toul summit

Thankfully no injuries and we followed the clear track up to the Angel's Peak (Munro 78)summit cairn and took in the amazing views. We were lucky enough to have clear views from each of our three Munros although the day was not without fierce but brief showery outbreaks *plenty of opportunity for me to remind the Hubs about the raincoat* 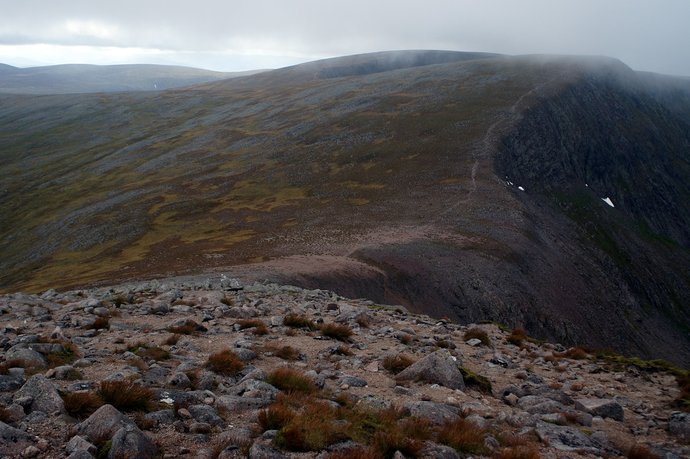 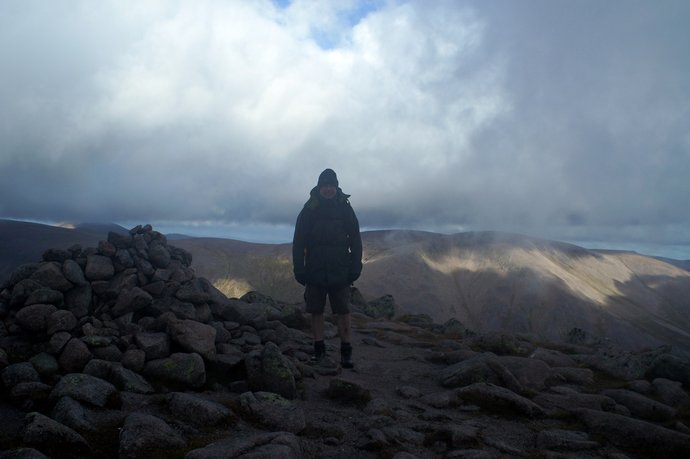 Braeriach behind the Angel's Peak 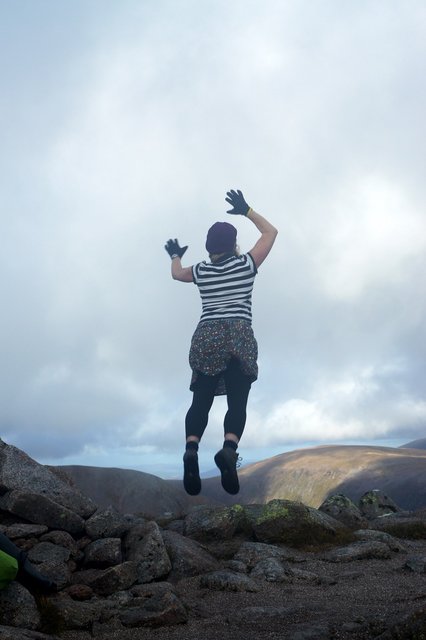 Munro 78 for the Hubs and me.The Angel's Peak

Following the track back down towards the bealach we turned SE heading straight for the summit cairn of Stob Coire a t-Saighdeir and thus avoiding the worst of the boulder fields crowning Cairn Toul's summit cairn. 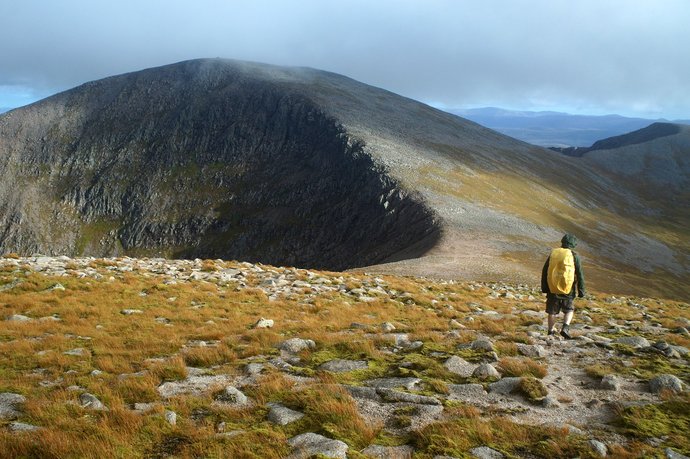 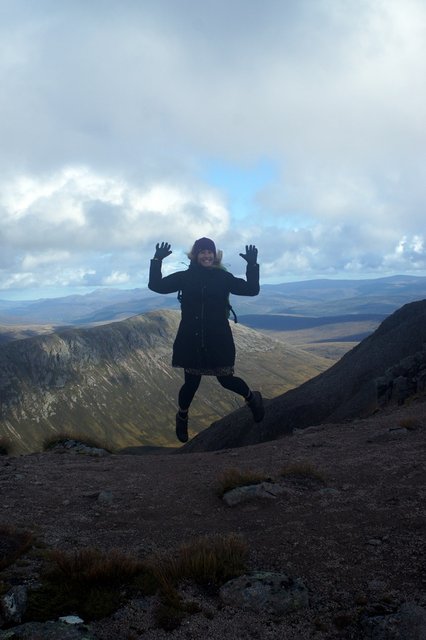 Carn a Mhaim behind me 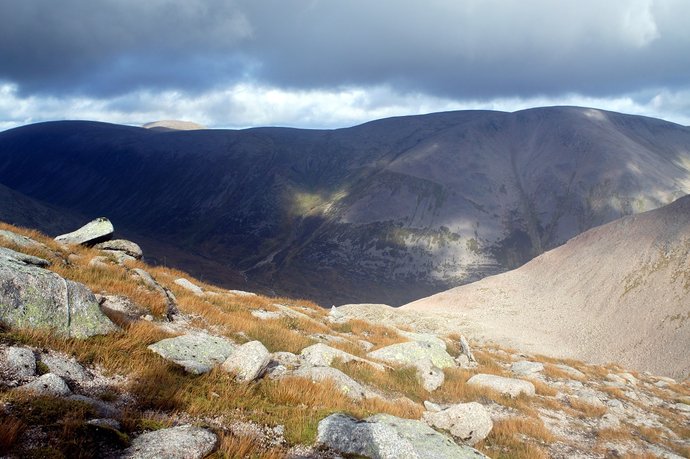 Returned via the same route and once back at Corrour bothy it seemed that a coach party had arrived. Lots of young hardy people pitching tents and cooking what smelled like very palatable food.

The sun was sinking rapidly now as as we trekked back across the interminable path skirting Carn a Mhaim we passed yet more people all coming in on a Friday night presumably to spend a weekend on the mountains.

Managed to retrieve the bikes before it got too dark and completed our epic day by biking back to the Linn of Dee car park in moonlight, a first for us.

Can highly recommend but please don't forget the waterproofs!

Walked/biked by Sarah and David in 9 hours 15mins.