Thank goodness for walkhighlands.co.uk.
It is about 3 years since i last did this circuit and on both occasions have walked it anti-clockwise with a southeasterly descent from Meall Cuanail then crossed the dam before descending to the road. These walks predate my finding this website.
So imagine my chagrin , on reviewing forum walks for this route , that on walking clockwise there is a ladder ascent to the dam wall that i knew nothing about!
We must have walked past the top of this ladder and assumed it was for maintenance purposes.
I immediately felt a bit of a fraud and decided to rectify the situation by doing a classic clockwise circuit via the ladder.
The weather yesterday was as good as the forecast suggested and on driving north from Inveraray the view of Cruachan from the top of the glen was stunning.
Arrived at the layby next to the station at 1pm to bag the last parking spot.
The walk through the birches up to the dam was definitely more overgrown than in previous visits but surprisingly there were no midges and luckily almost no brambles.
Walked round the east side of the reservoir and appreciated previous walk reports suggesting avoiding the path at the first cairn [now with a large arrow made of stones] and taking the second less obvious path just before the mini weather station and heading west up Coire Dearg. view from start of path

This path was mainly dry and was an attractive route up to the col between Meall Cuanail and Ben Cruachan. 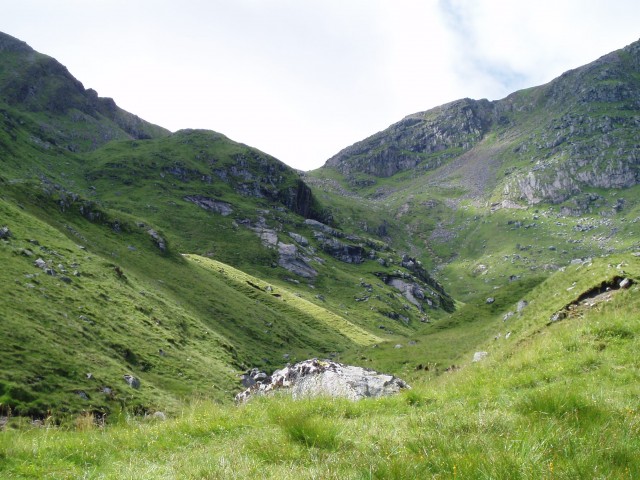 On reaching the top of the coire the view westwards bursts into sight. 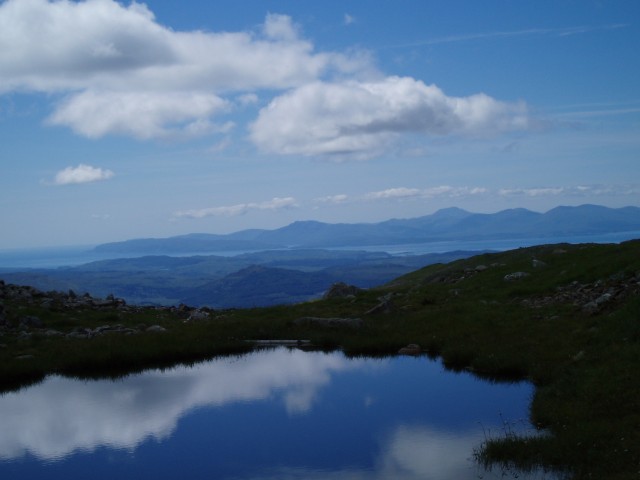 An immediate advantage of this clockwise circuit was that there was very good simple scrambling to the left of the path up to Ben Cruachan. The top initially looked nearer than it actually was and it was hot work in the sun.
However the views from the summit were fantastic in all directions. to paps of Jura

And north west to Rum i think. Unfortunately the only midges seen all day were on the tops. so didnt delay long and headed west along the ridge. west to Stob Diamh and Garbh [egde of pic]

The descent off Ben Cruachan was again interesting if keeping to the ridge but there was also a path if desired.
This leads to the large slab which is nice when dry but a bit intimidating otherwise , hence the bypass paths to the right in the photo. The rest of the ridge is uneventfull with steep drops to the north and by the time i reached Stob Diamh the sun was getting lower and starting to show the profile of the rocky slopes at its best.
The wind now died and on the descent from Stob Garbh it felt hotter than earlier in the day. view west into the sun

I lost the path for a few hundred metres but despite the dry weather , it was still quite wet and muddy and always the risk of a slide.
However i think i prefer this near the end of the walk. Doing it anti-clockwise makes for a slow tedious ascent of Stob Garbh.
Still very hot descending from the dam, but reached the layby ,put the roof back, and a cooling drive back home made a great finish to as good a day as you get.

I think next time I do the horseshoe, I'm going to miss out Cunail and go up where you have - looks a nice route. Not sure about the dam ladder - don't remember one at all but it will be for maintenance purposes if there is one and not for walkers - although I'm sure they probably don't mind others using it?

Some great photos there, especially of the 'awkward slab' - the bypass paths can't totally bypass it to my knowledge - I wanted to but Richard scouted it out and decided we could bypass the first little bit and then we had to climb up a crack in the rock and go along the top to continue along the ridge - I wasn't keen as I found the steepness behind intimidating. I wish I'd stuck to the ridge coming off Cruachan's summit though as I think it's better than the path which we used and I again found initimidating. But it was early days for me Munroing-wise when we did it (2nd Munro) so maybe I'd find it all better now. The funny thing is that I never saw your views from the summit as, by the time I reached it, I was convinced I was in an airy place with huge drops in front etc. so didn't look at anything at all but just hurriedly continued the walk!

ridgerunner wrote:So imagine my chagrin , on reviewing forum walks for this route , that on walking clockwise there is a ladder ascent to the dam wall that i knew nothing about!

Must admit I used it on an anticlockwise route. I must admit I'm pondering about clockwise as would that not have you out to the other side of the dam where theres a path and you wouldn't even need the ladder?

Hillwalking with ladders, I'll have some of that

- handy for laying across burns too I expect