Brilliant views from Creag Each

Brilliant views from Creag Each


Creag Each is one of my local Grahams and I've done it several times: this was a particularly brilliant sunny day and the forecast was for stunning visibility, but there was so much unconsolidated snow on the bigger hills that I decided to keep fairly low and hope to get good views - I wasn't disappointed

I left Station Rd in St. Fillans, took the path below the railway bridge, climbed on to the old railway and followed it, going round the outside of a blocked tunnel, to where a path leads R up through Glen Tarken woods. This climbs pleasantly through the woods at a very amenable angle until you emerge with splendid views down Loch Earn The bridge over the Alt an Fhionn Loch Earn with Meall an - t-Seallach on the R
The path goes through a narrow wooden gate, and continues a bit boggily to the old croft of Jerusalem . The gate with Creag Each beyond: the summit is almost directly above the gate, but the steep gully on its R is full of slippery boulders and not recommended A boggy bit through a second gate - Jerusalem in the distance
Just beyond you cross the Glen Tarken burn and join the main track up the glen. From here a cart track on the L leads up to a gate and in summer I usually step over the fence beside it, head left for a bit and then straight up easily on short dry grass trending R at the top. - see pic below I have found - reading the new SMC Grahams guide - that the "official" route heads up the R of the burn. It may be more direct, but the terrain here is much rougher. Looking back East
On this occasion I headed R a bit earlier, but whichever way you go there is a lot of dead ground and a lot of false summits before you actually arrive A big snowy hill starts to appear on the R 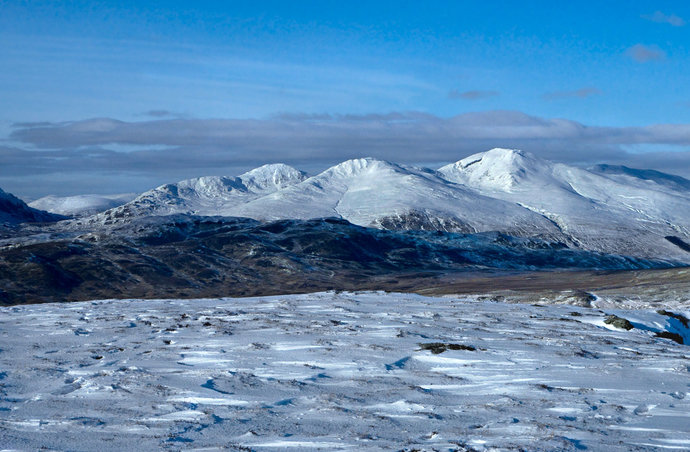 West to Ben More and Stobinian
A couple of sets of footprints led North - no doubt following the approved route on to Creag Ruadh - and I decided to follow these - keeping the fabulous view in sight for a bit longer. A wider view
The snow was a lot deeper on the Northern side, but the footsteps led down to the track in the glen where I headed R until I rejoined my outward route and retraced it back to the village . Looking South up the Fin Glen to Meall na Ferna: Ben Vorlich on the R I like that you mentioned the blocked off St. Fillans Tunnel. I may not drive up a road where there's a rusty old sign saying not to but I'll happily bypass a tunnel fence as I find them interesting to photograph.

This looks like a good walk and one I might take a look at next time I'm in the St. Fillans area. You've got some great photos there as well.

K-Burn wrote:I like that you mentioned the blocked off St. Fillans Tunnel. I may not drive up a road where there's a rusty old sign saying not to but I'll happily bypass a tunnel fence as I find them interesting to photograph.

This looks like a good walk and one I might take a look at next time I'm in the St. Fillans area. You've got some great photos there as well.

You can also get on to the Railway before the tunnel from Shoemaker lane (easier parking).
yes they are good photos, but the weather has been so clear that Everybody has been getting great photos

- some of them in much more exciting places than I.
'Fraid I don't like walking on tarmac which is why I did Creag Garbh along the Rob Roy way

Ditto the comment about the quality of the pics!