zigzags actual.gpx Open full screen  NB: Walkhighlands is not responsible for the accuracy of gpx files in users posts

Avalanche forecast wasn't looking great so I thought I'd give this a go since I hadn't done it before. There was a group at the car park who were heading that way so I knew there would be footprints to follow. Low grade 1 summer scramble or grade I winter climb, it does have its moments though.

Gearr Aonach from the car park, the zigzags are on the east side so best seen as you drive up from the south. 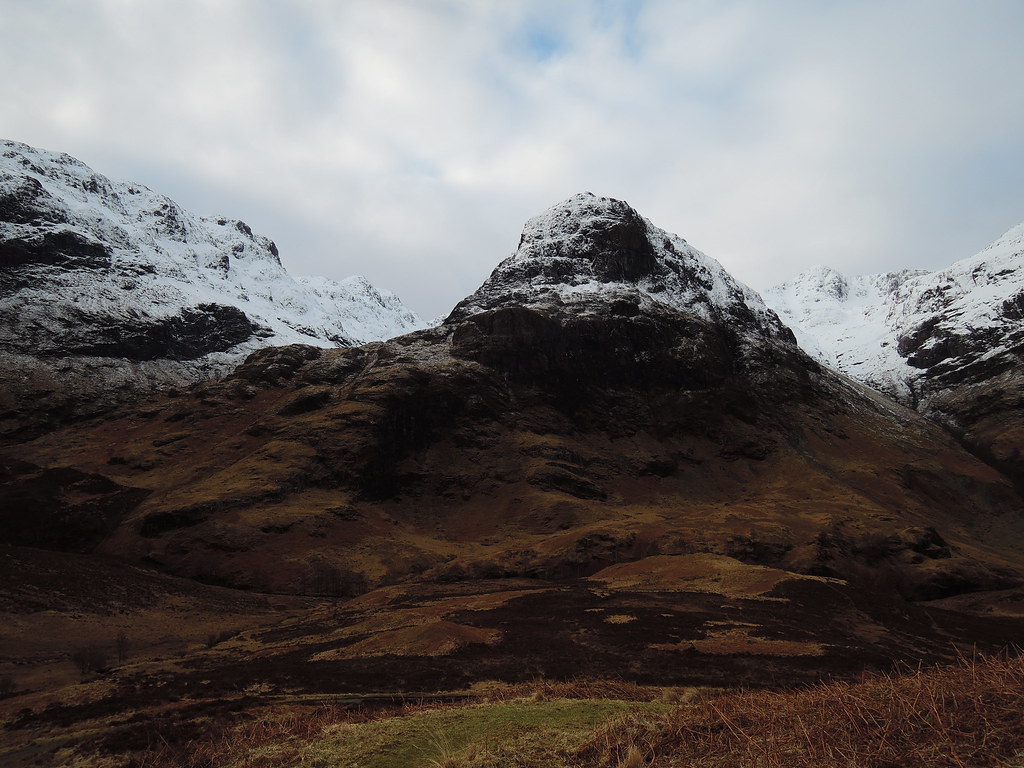 Over the bridge and through a stile. 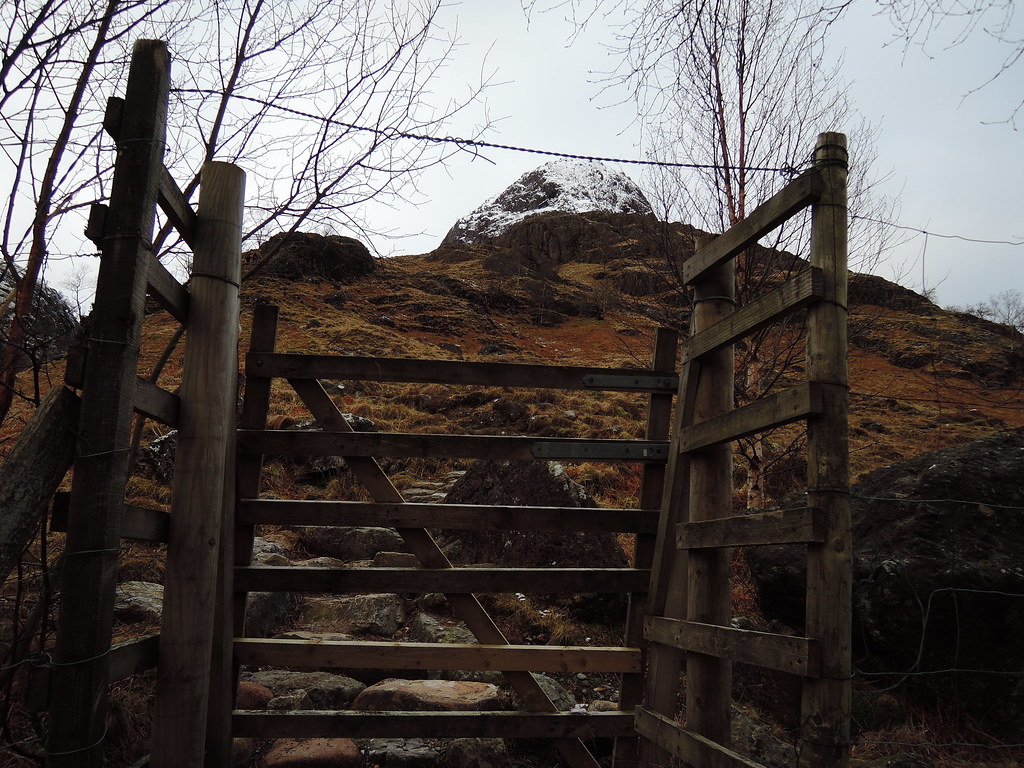 Lost Valley path branches at a small boulder, took the higher path on the right. 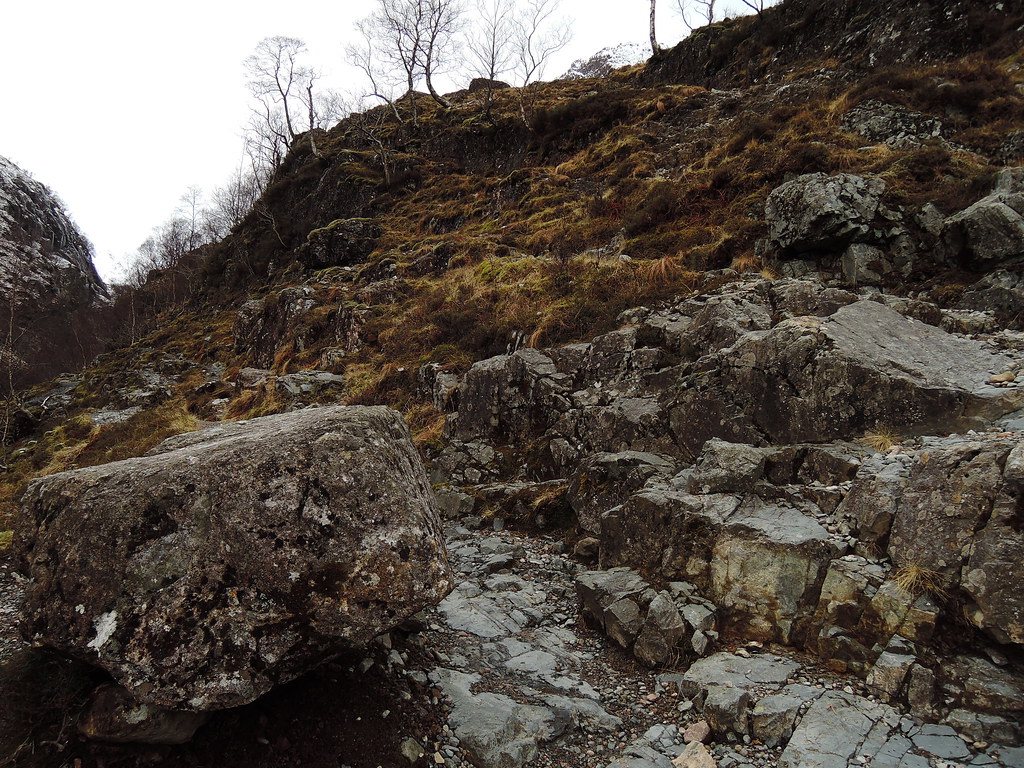 Then branched off onto a rougher path at the large boulder. Got a look at the route from here. 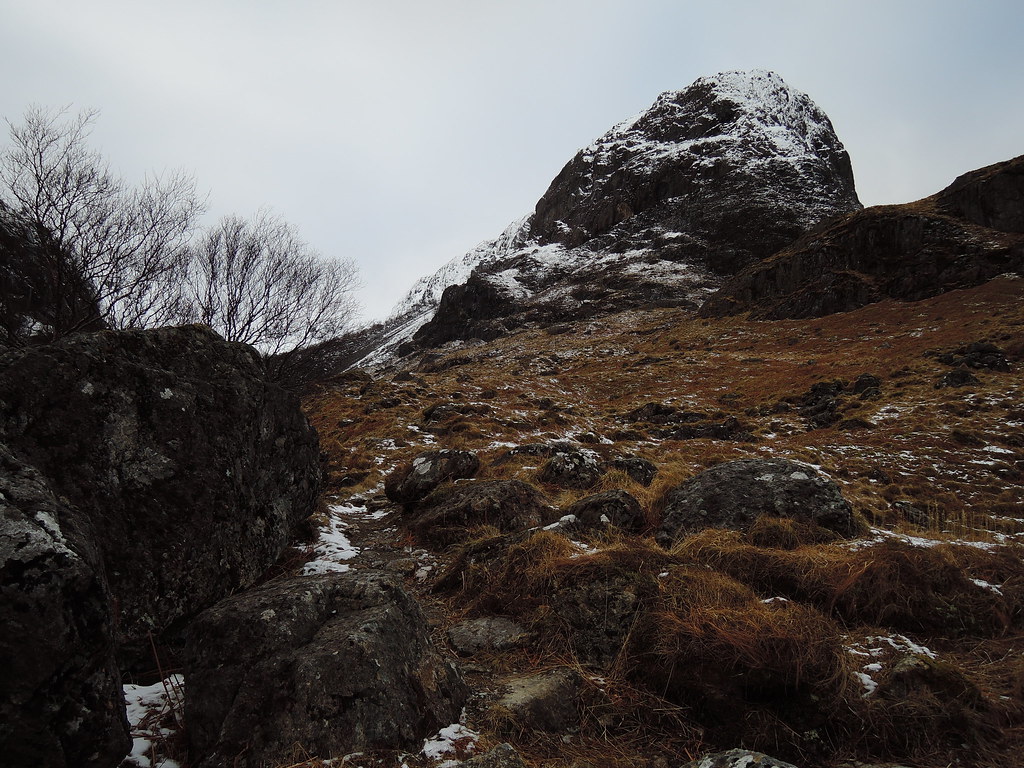 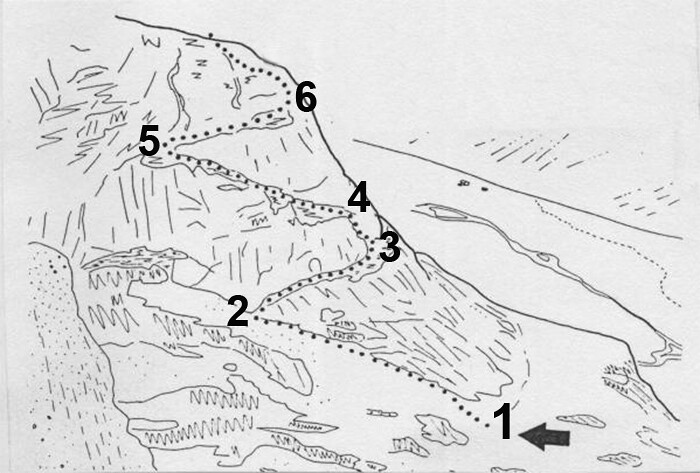 Numbers at roughly the same position. Route starts at 2, it's a traverse to the right under an overhanging rock wall. The guided party ahead of me were gearing up here and the said the tricky part was between 3&4, everything else was fine. They kept the crampons and axes in the bag since it was basically a scramble so I did the same. Water drips off the wall and turns to ice below so had to be careful on a few steps up. So this is the easy bit: a slippy path with a drop on the right and no crampons. 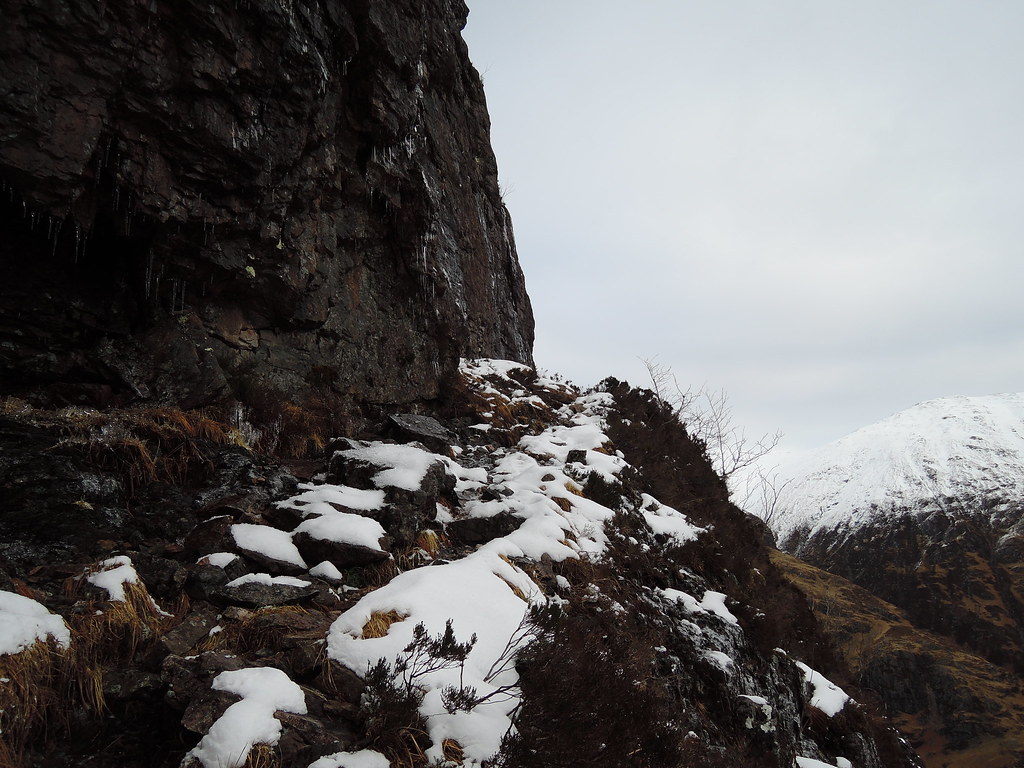 Tree marks the spot to head upwards between 3&4. 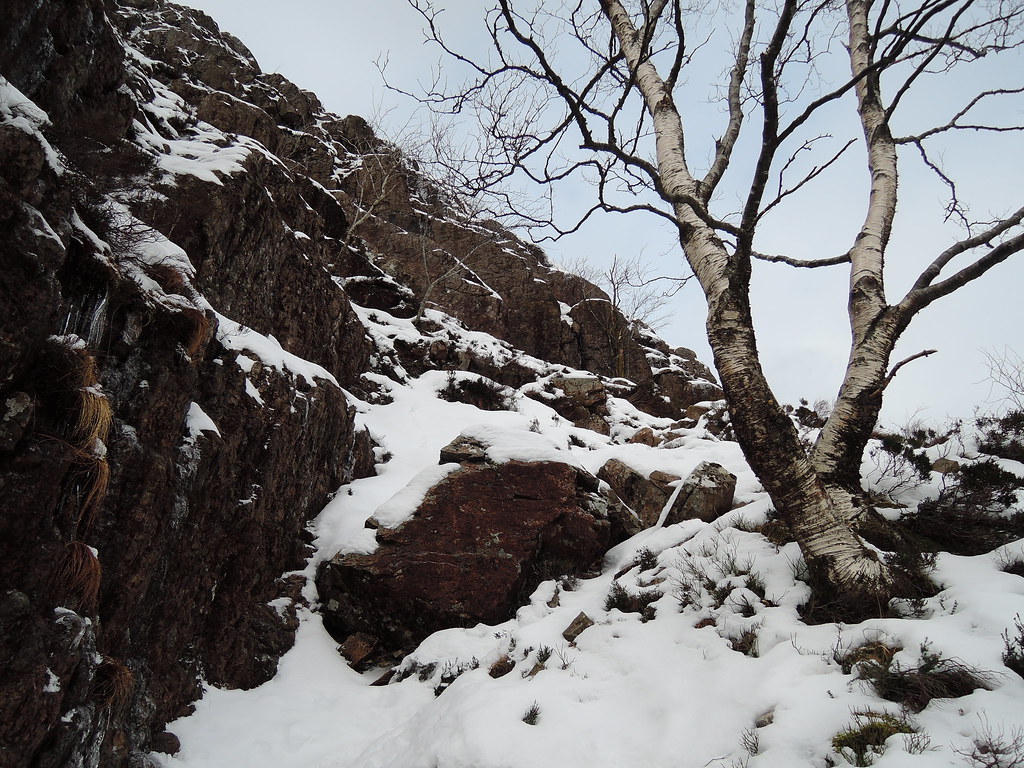 Group ahead scrambling up the corner. I found this harder than expected with ledges and holds covered in snow and ice. Started with no gloves but hands soon got numb, with hindsight an axe would have been handy here. View back down from 4: 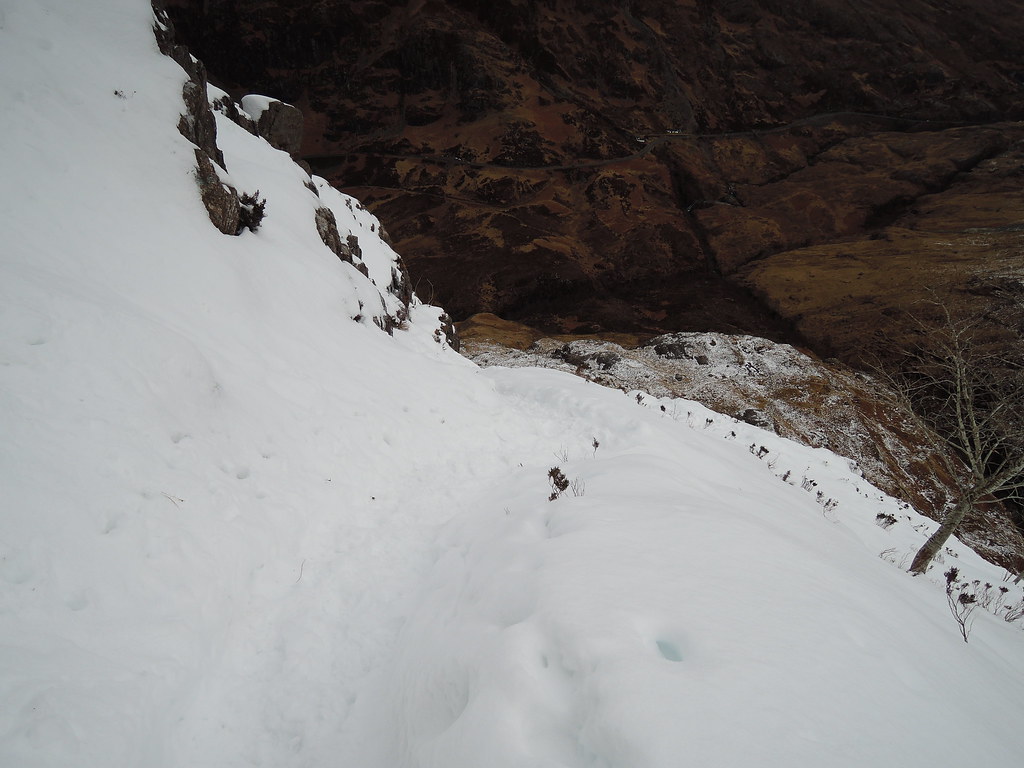 Hard stuff over, now a long zag back to the left. There's more snow up here so it's easier to walk on without crampons. 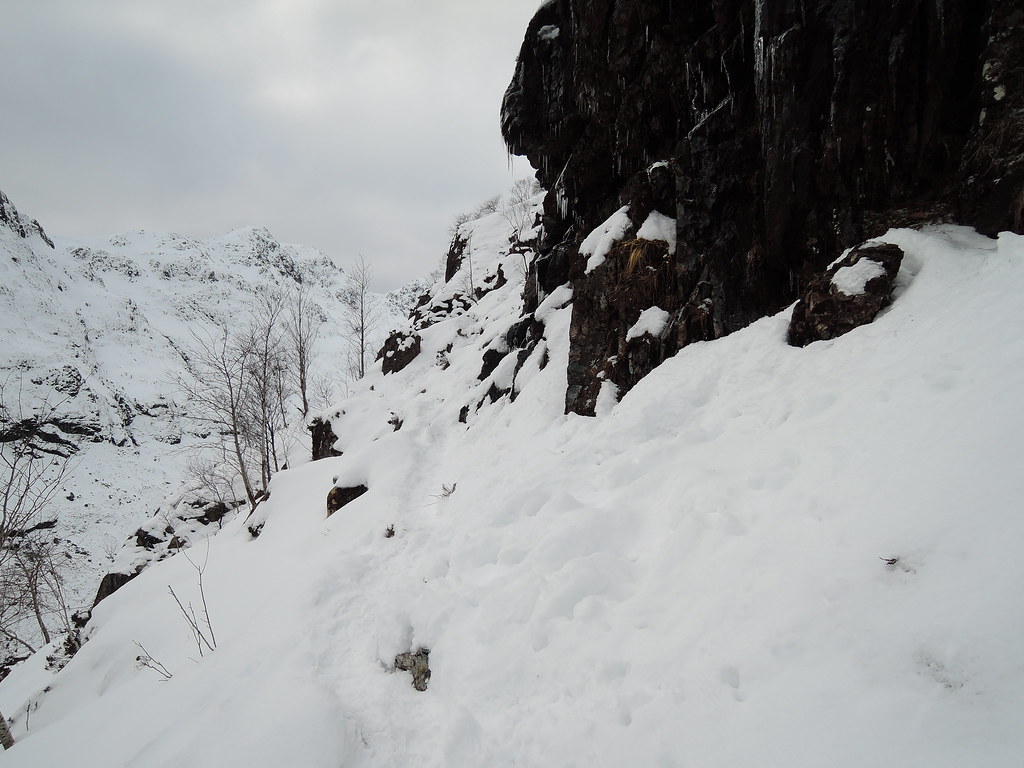 Getting close to 5, Beinn Fhada on the left. 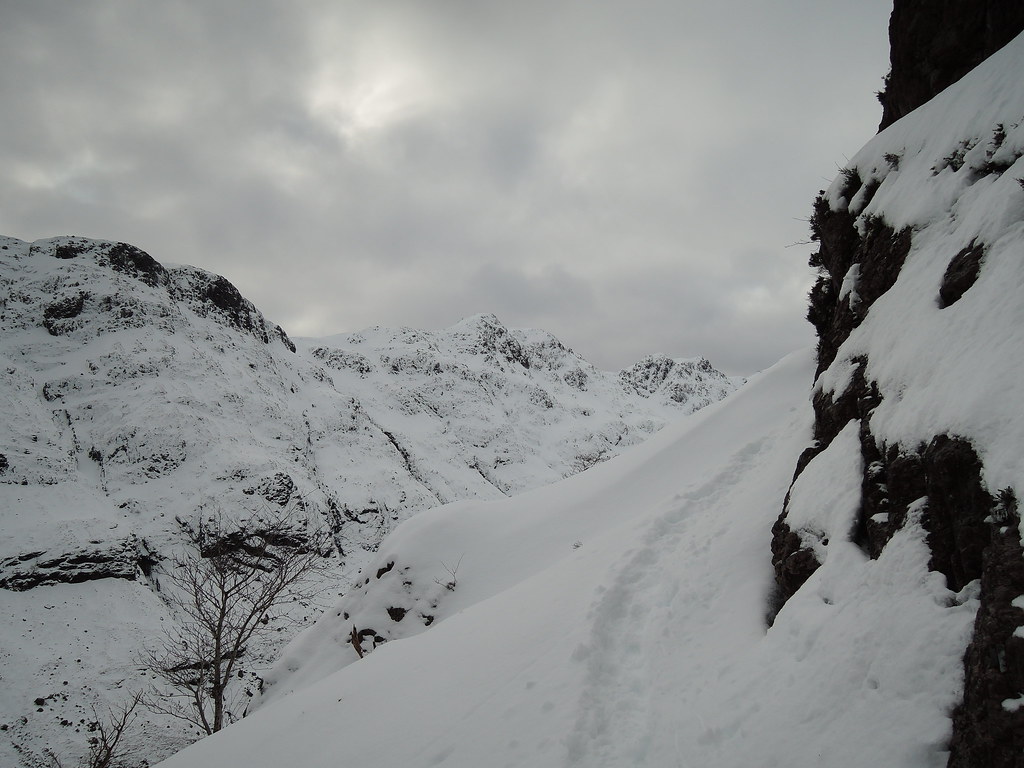 At 5 there were prints leading directly up (missing out 6), I got the axe out and followed them but the snow was too soft so I backtracked. 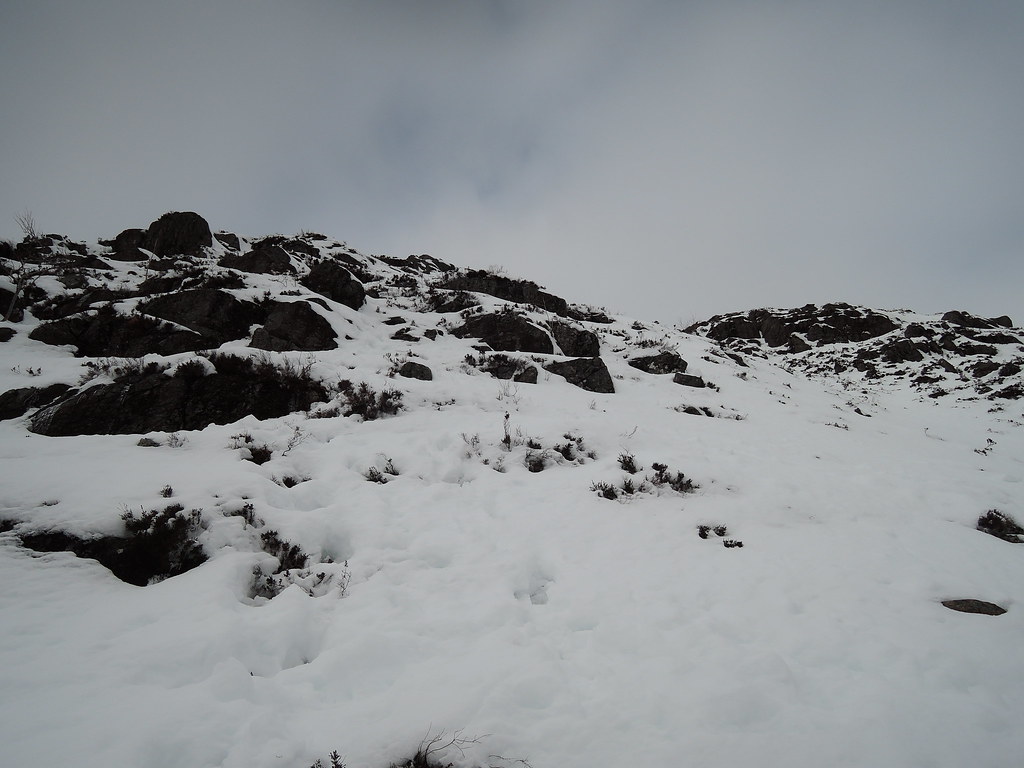 Got the crampons on for the last zig across to 6. 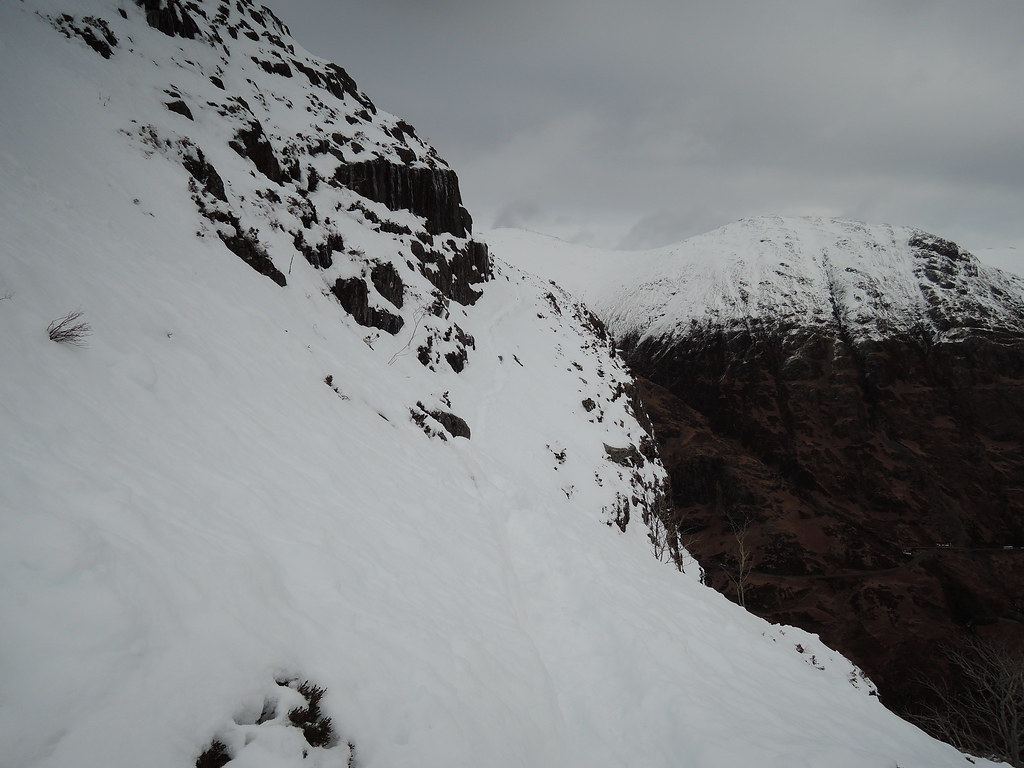 Then up the nose 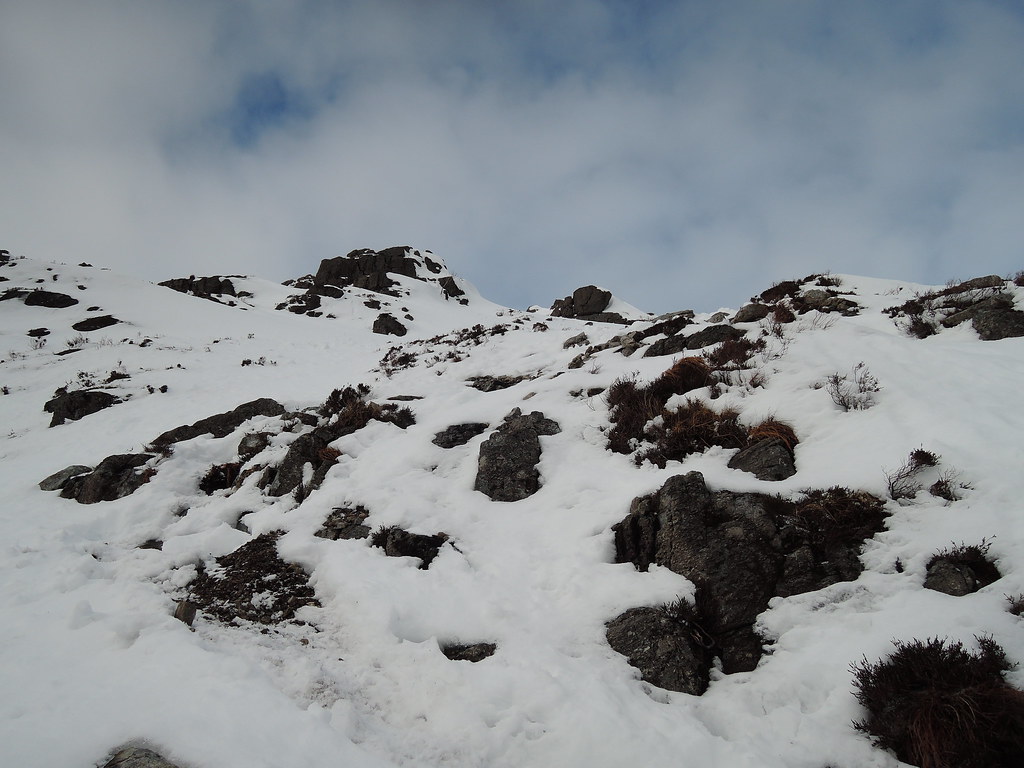 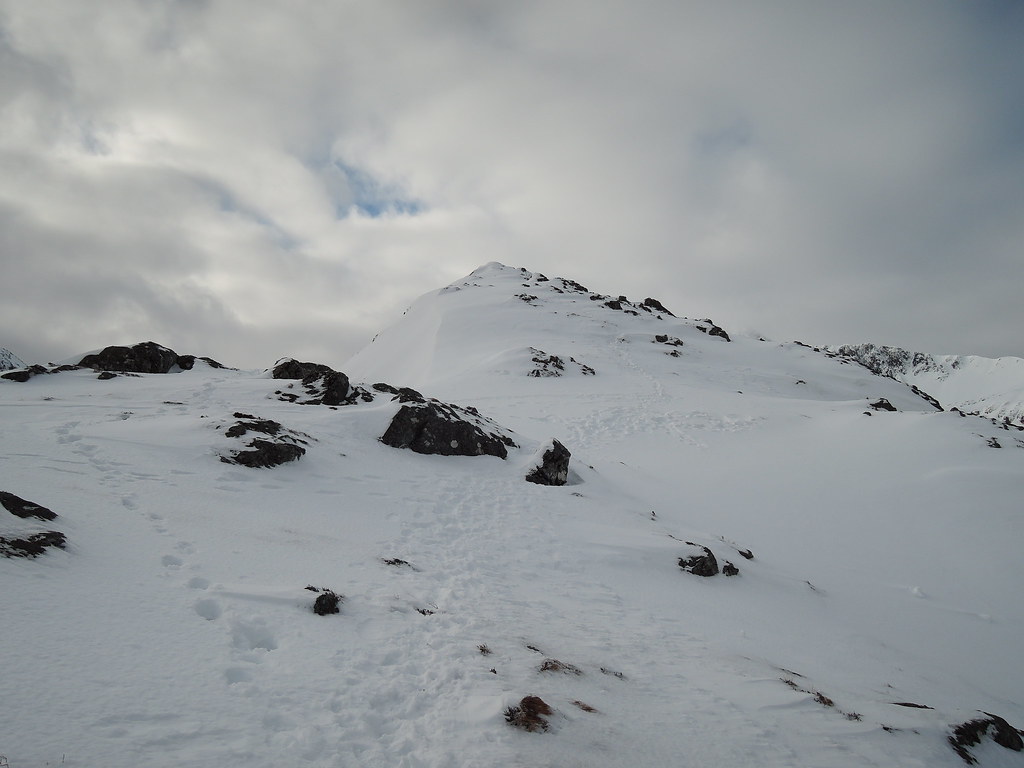 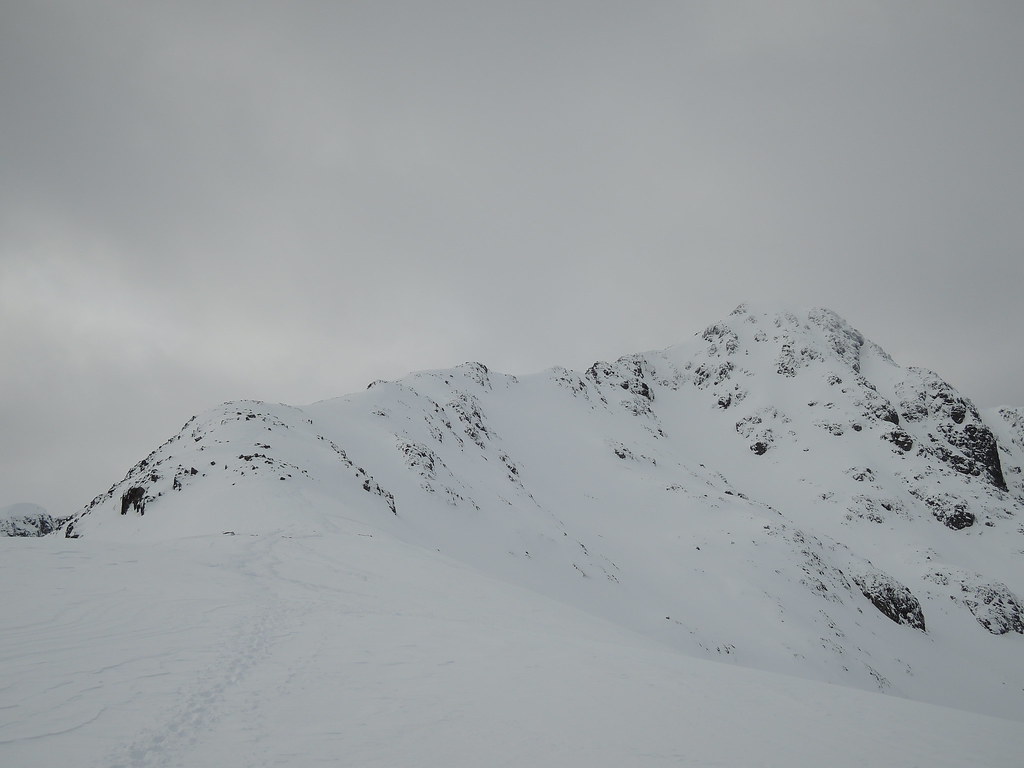 Spotted a rock step, a couple of Irish climbers are descending it here. 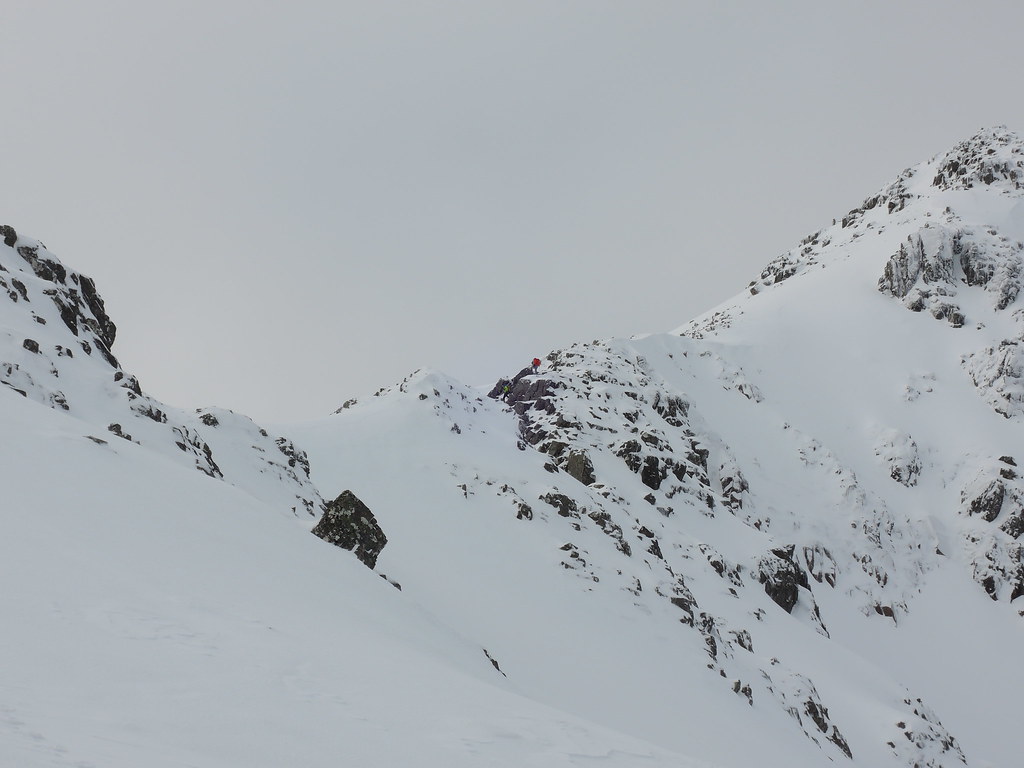 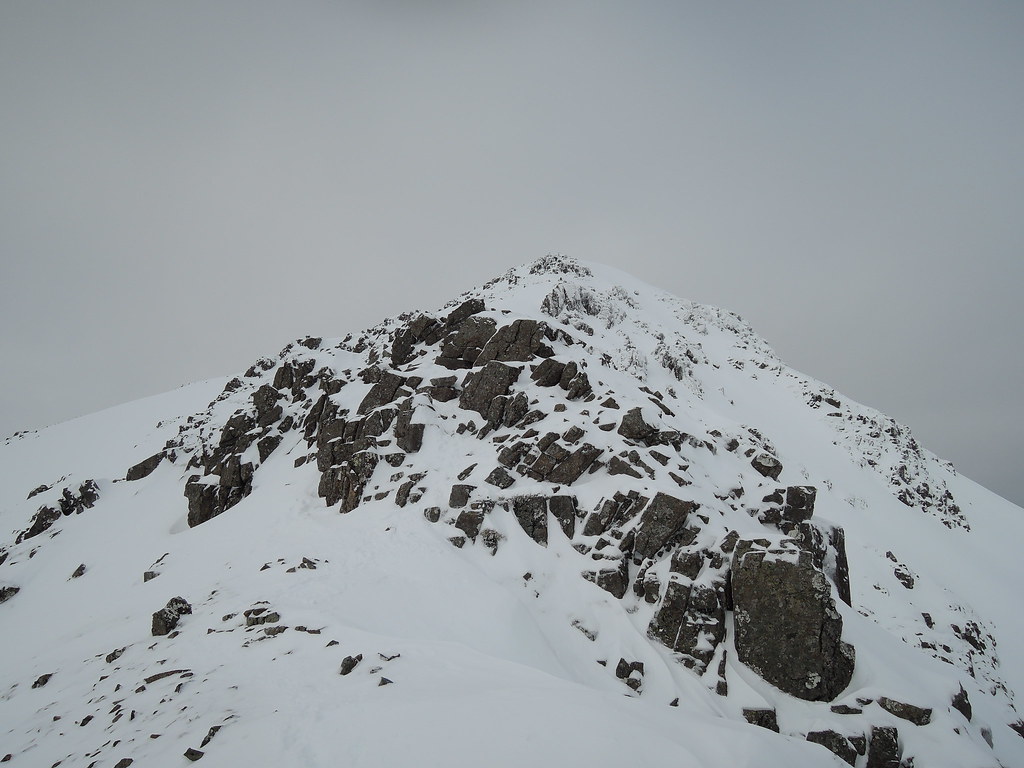 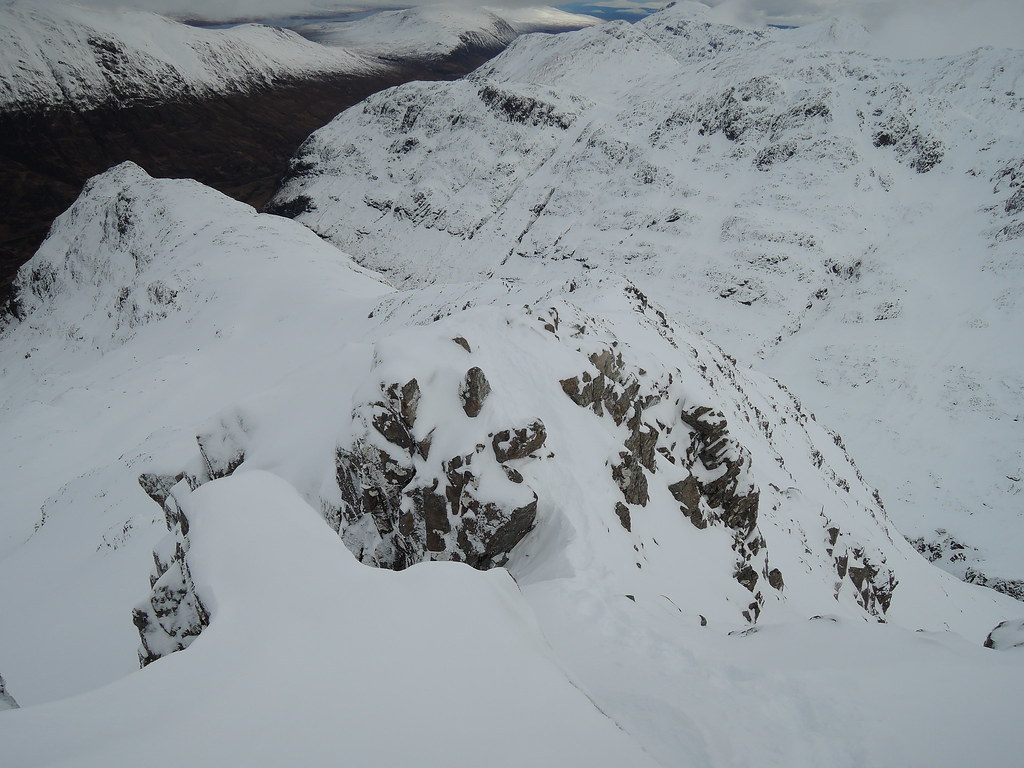 Had a roll at the summit while another zigzag guided group caught up, heard a few walkers had tried Bidean but retreated due to deep snow. The descent from Sgreamhach into the Lost Valley also looked precarious. Thought about descending Broad Gully but it was deep soft snow and looked like nobody else had been on it today so I took the safe option. I think the group ahead of me were on Dorsal Arete. 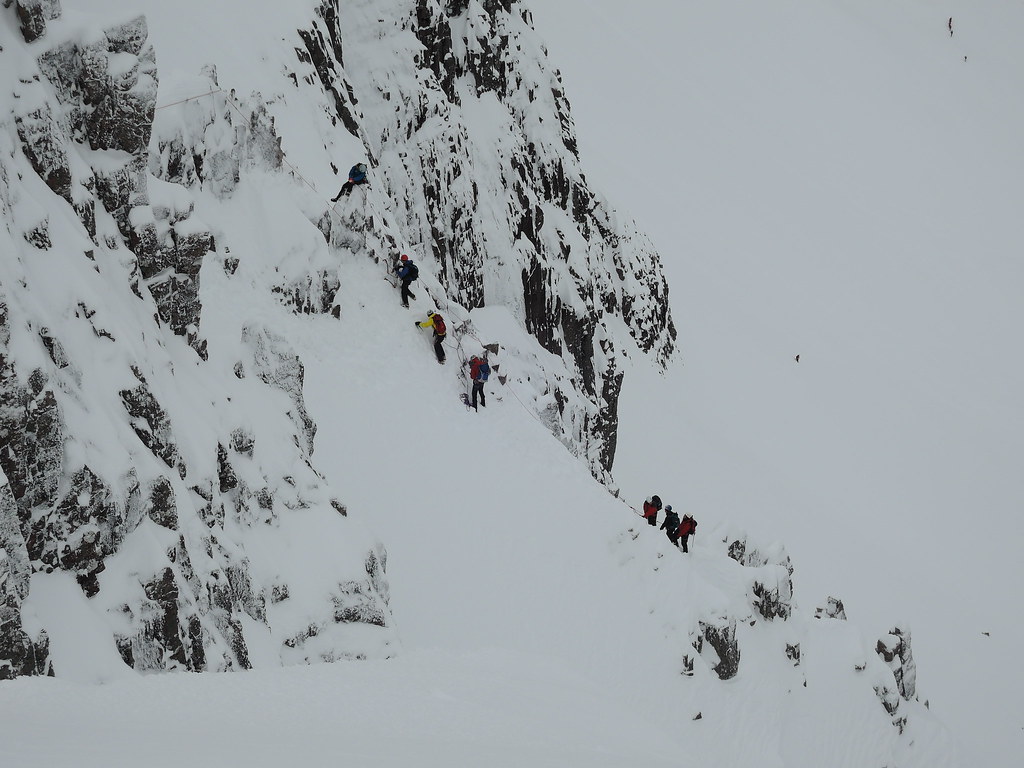 Nice place for a seat. 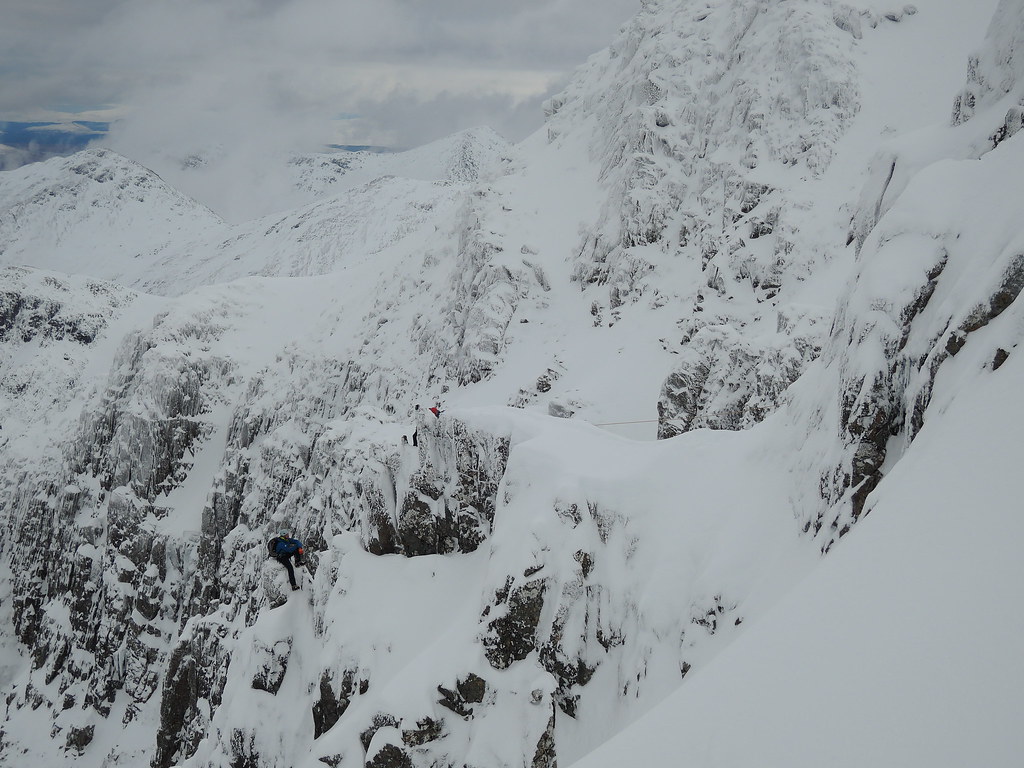 Could see large blocks and other avalanche debris on the way back round, looked like a cornice collapsed. 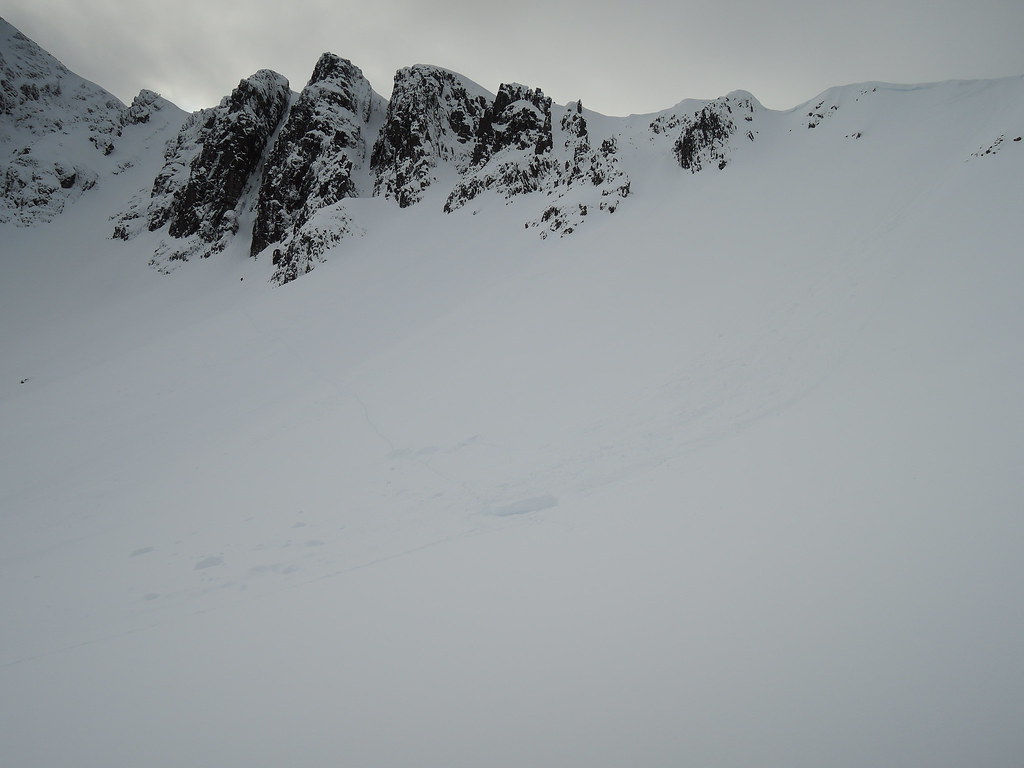 Yes, looks scary to me also. I just remember those young folk killed in an avalanche in Glen Coe last year (but then I'm neurotic about avalanche possibilities....)

It looks scary but I think it's a low risk for avalanches because it's a steep face and snow doesn't really accumulate on it. You can check this as you drive up and from the car park. There's no cornice at the top and you're safely on a ridge all the way to SCNL. That's probably why it's so popular with guides, who were avoiding SCNL gullies on the day but took clients on the zigzags and either did Dorsal Arete or practised belaying on snow slopes. I always remember the group of 6 who were avalanched in 2013, one of the guides on the summit of SCNL said he knew them and pointed out where they had been descending below Church Door Buttress.