I've been meaning to write this for a while now. Back in September three of us made a late-summer dash to Snowdonia for a big day of scrambling on Tryfan. I say a dash, it was more of a bumble really. My Dad drove to Bristol from Southampton on Friday night to pick up me and Joe in his huge old campervan, which I then drove up to Capel Curig, trying desperately to get it above 60mph wherever I could, and largely failing. Apparently a camper as old as I am loaded up with a ton of gear just doesn't shift!

So midnight arrived and so did we, to the ever reliable and always wonderful Dolgam campsite. I nearly always stay there now; at a fiver a night with free hot showers you can't go wrong, and the owners are great. Plus if you go to the Royal Oak in Betws y Coed you can usually get served their excellent mountain lamb! The other reason I love this site is the awesome and ever changing view you get of Moel Siabod: Moel Siabod in the early morning sun as seen from Dolgam 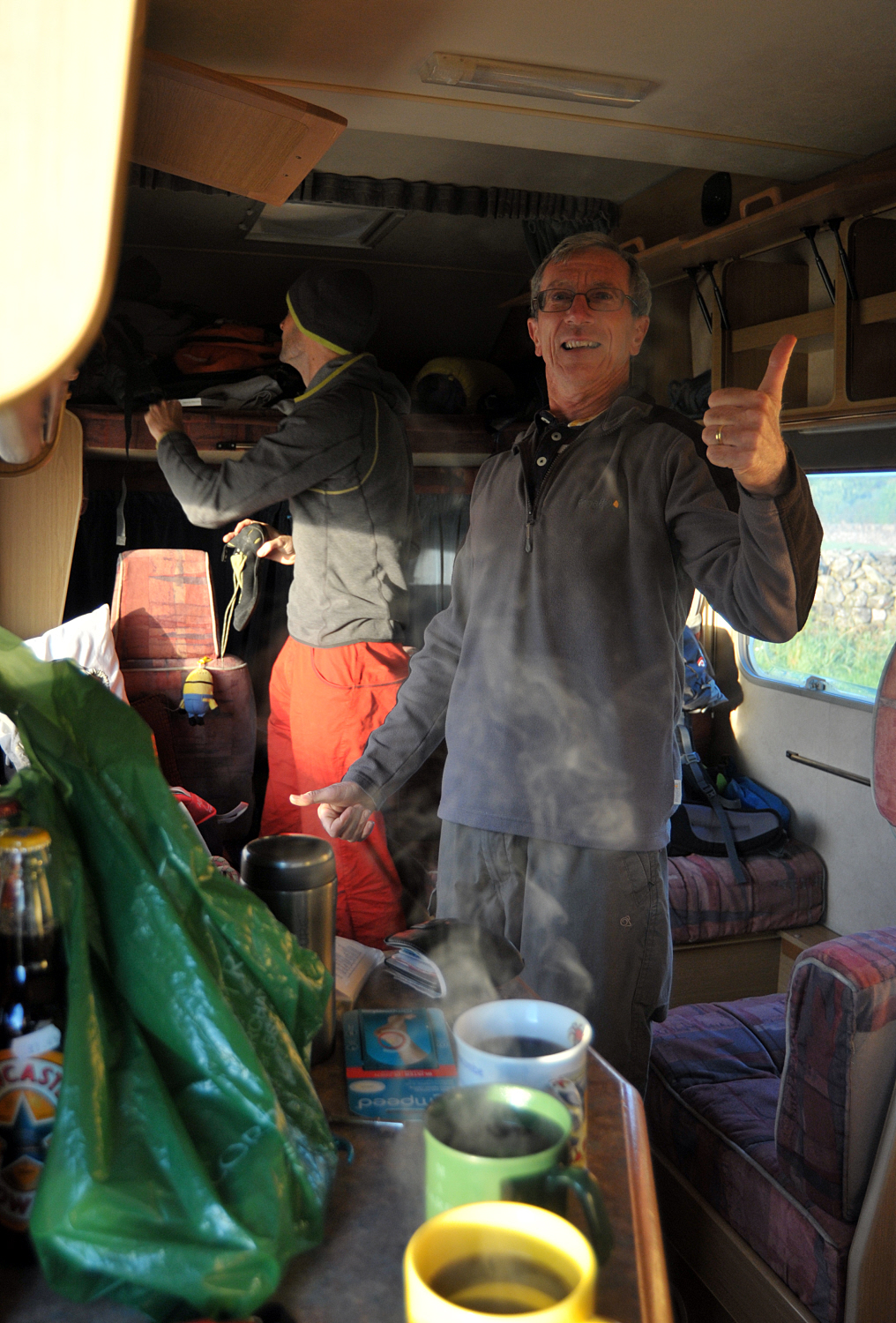 After a swift breakfast at Siabod cafe (another tried and tested Snowdonia gem - worth a visit for the coffee and the photo gallery which is inspirational) we headed for Tryfan and must have been the first people on the mountain in the morning.

The plan was to do a day of solid scrambling; I really wanted to set about my first Grade 3 scramble and my Dad was keen to get a couple of harder scrambles under his belt. Joe was happy to be on rocks wherever we were and wanted to get some hard scrambling done too, so the plan was to hit Heather Terrace and do two routes up the east face; Bastow Buttress (2+) and South Gully (3-). 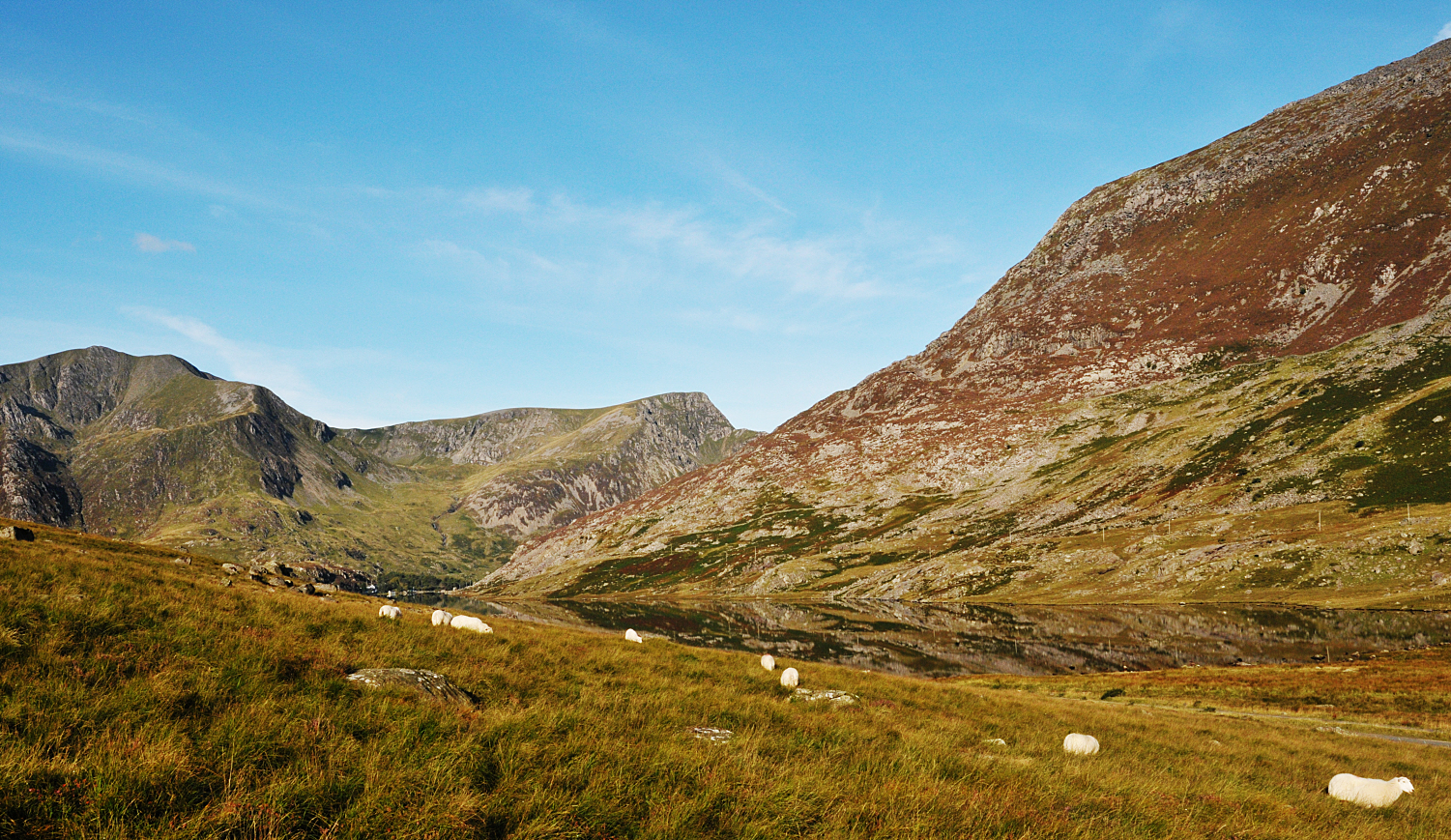 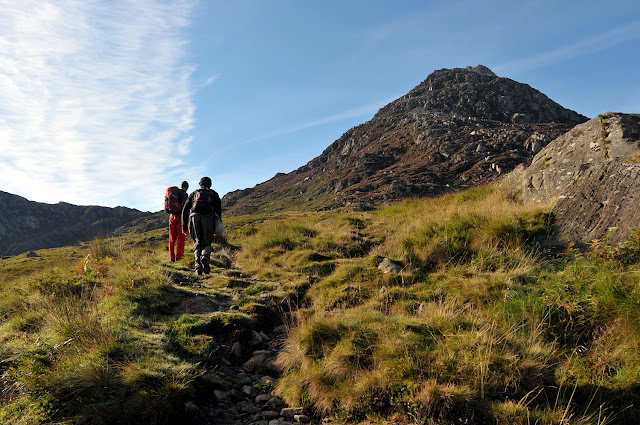 Heading for Tryfan and towards Heather Terrace

Getting to Heather Terrace involved a lot of slipping around on wet rocks for me. I had made a terrible choice of approach/scrambling shoes and was cursing myself for not wearing my hiking boots most of the way! Note: don't rely on Salomon walking shoes for grip! 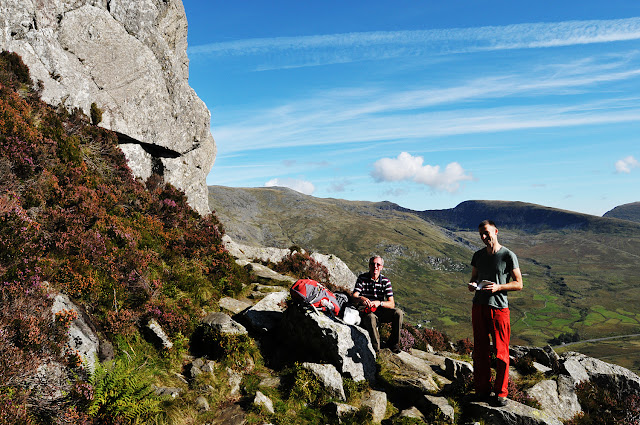 Dad and Joe on Heather Terrace with the Carneddau range behind

Bastown Buttress (2+) was one of the most entertaining scrambles I've ever done. No doubt helped by some damn fine weather and good sections of steep climbing mixed in with good resting spots, occasional moments of a feeling of exposure and interesting route finding. 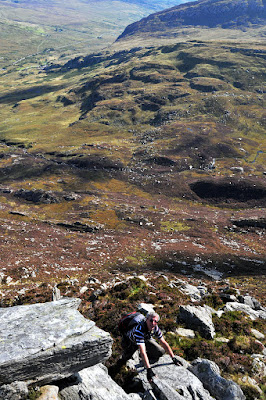 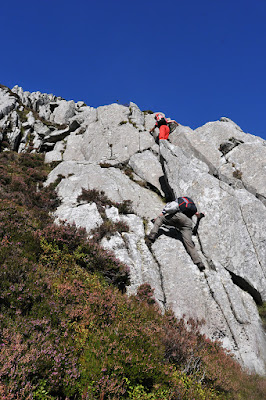 The start of Bastow Buttress 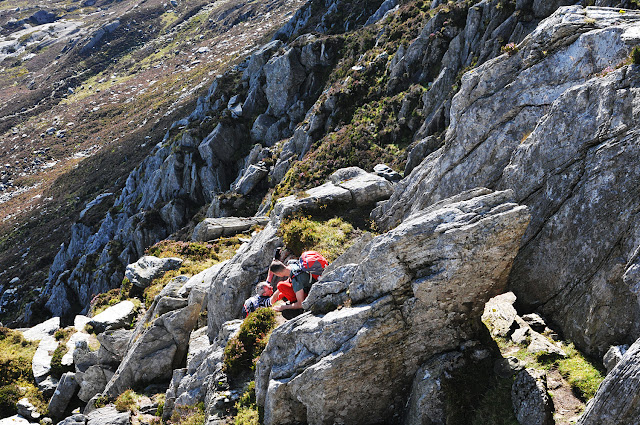 Working through some of the tougher sections together 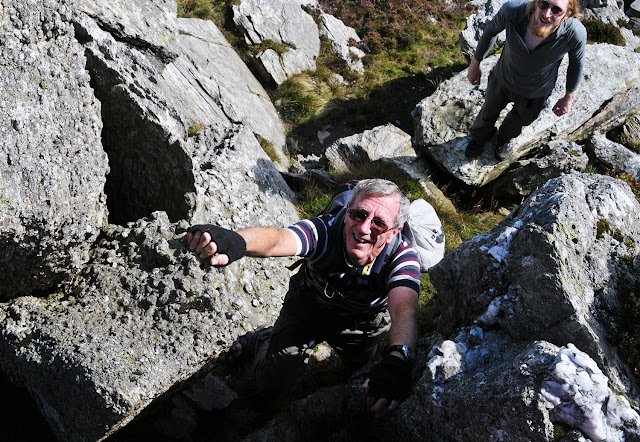 One of the best things about the Bastow Buttress routes is that it tops out just below all the interesting bits of the North Ridge (1) scramble to the summit of Tryfan, so we headed up and over The Notch, over the North Summit and onto the summit proper.

It was a busy day along the ridge and felt weird to be on the mountain suddenly surrounded by people. Below on the east face it had felt like we had the mountain to ourselves, we hadn't seen more than 1 or 2 other people along Heather Terrace by the time we headed up to begin climbing, and had had Bastow Buttress all to ourselves.

I think that's the beauty of the off the beaten track routes in Snowdonia. You can find your own adventure, your own sense of isolation, even when you're not far from the masses of crowds heading up the regular routes.

No matter how many times you've climbed Tryfan, the north ridge is always an enjoyable route to take to the summit. There's a great sense of people helping each other out along the way, the most amazing views of the Ogwen valley, spectacular views of the iconic and almost oppressive Pen yr Ole Wen, looming over Llyn Ogwen. Tryfan Bach below was studded with people trad climbing, the sun was hitting Y Garn and the lushness of its green sides was glowing.

At the summit we stopped only to watch a couple of people take the traditional leap of faith across the gap of the infamous Adam and Eve stones, before we headed down the south ridge and contoured back onto Heather Terrace from above and set ourselves up for South Gully (3-).

This entertaining scramble puts the hardest part to bed right at the beginning. There's a challenging entry point to the gully which a smooth wave-like stretch of rock just big enough to make you reach for the rope for a bit of security. 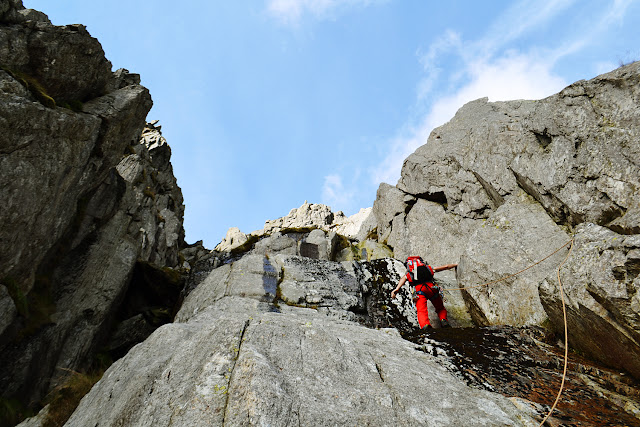 A slippery start to overcome 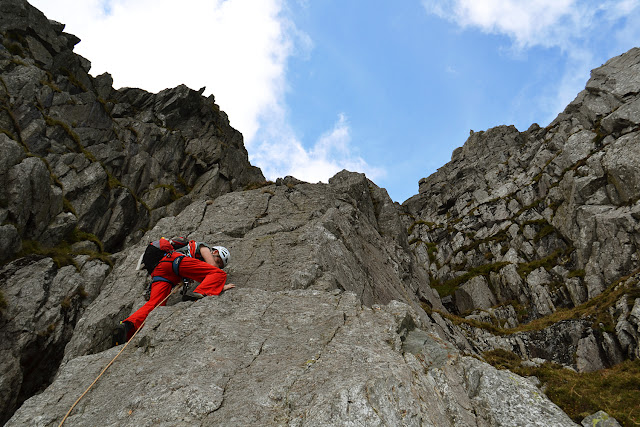 Once over the start the going gets easier and as long as the central rib is avoided by keeping to the left it a mix of soggy damp mossy nonsense and thin flakes of rock making for easy but seriously fun scrambling. Getting over one particularly challenging section (due to serious wetness) became a drawn out game of 'find the route' with Dad eventually disappearing over some filthy grassy ledge and finding some old abseil tat and calling for us to pass the kit up! The views and exposure made this an amazing climb. 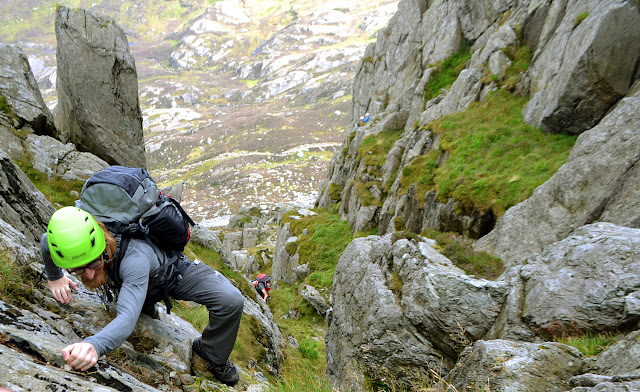 Me high on South Gully with Joe below (pic by Dad) 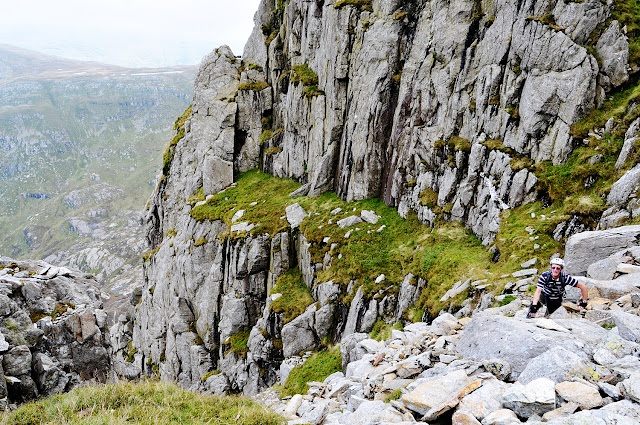 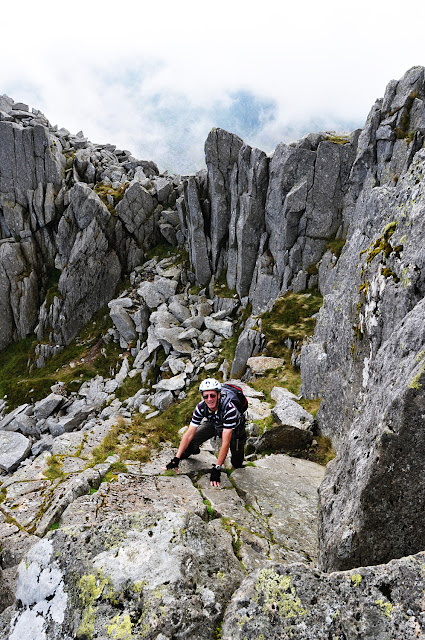 Dad topping out the Gully 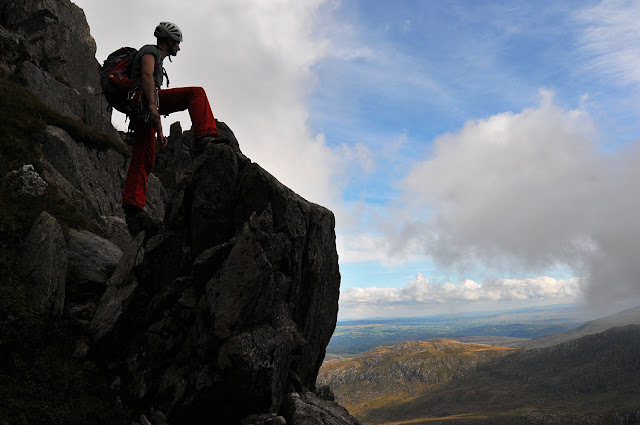 Joe striking the mountaineer pose just below the summit

Summiting Tryfan via the South Gully has to be one of the most entertaining things ever. You get to suddenly spring up from the 'wrong' side of the Adam and Even stones, and as everyone up there is taking photos of each other doing the leap of faith, all of a sudden a bunch of helmetted nutters are photo-bombing their way onto the summit from the back! There were some confused onlookers and suddenly people looking over the back of the stones to figure out where we'd come from. 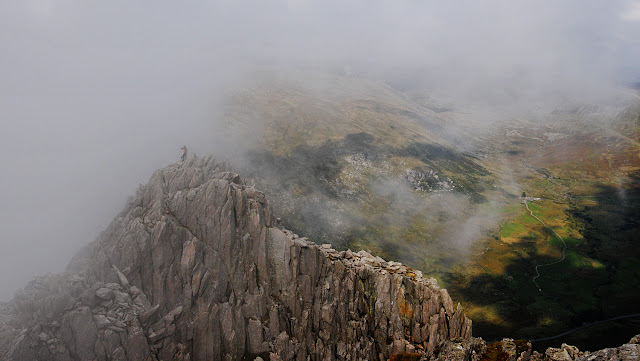 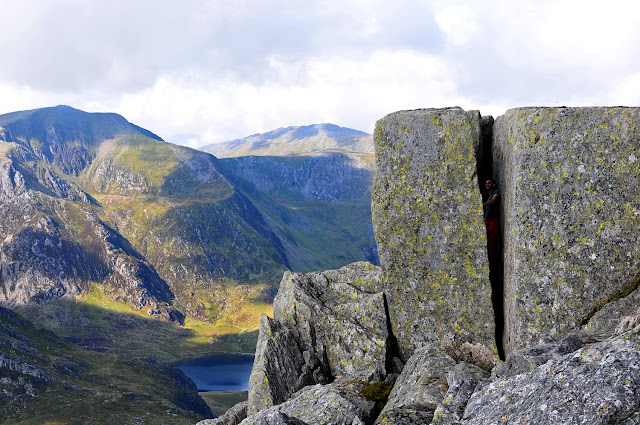 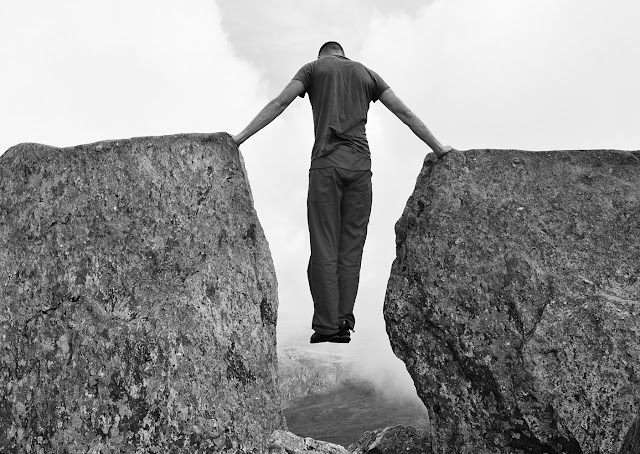 The alternative Adam and Eve pose from Joe

Awesome report and photos. Having recently made my way up Tryfan for the first time and vowed to return, this looks like a great route!

Yep - Tryfan offers some of the finest scrambling around across the full difficulty spectrum! And you had a great day for it.

Loved the variation on the standard Adam and Eve pic

BTW lots of good stuff on the East Face of the Glyders to extend your day next time, if you're so minded!

Congrats on your first post DX, it's a belter. Some wonderful images of a great looking scramble. Your attempt to get the camper above 60 are admirable

Great write up, welcome to WH