With a week off work I thought it about time I got myself up to the Highlands again. I wasn't quite sure where though. My Munro bagging exploits over the years haven't been especially methodical, so the ones I have left to do are scattered all over the place. In view of reports of recent heavy snowfall and a poor forecast for the weekend beginning my trip, I didn't want to travel too far. I decided to base myself at Roy Bridge to begin with, handy for Gulvain to the west and Creag Meagaidh to the east, both of which remained to be bagged.

Travelling up on Saturday, the weather looked pretty grim on the mountains. The terrible forecast for Sunday was borne out by the reality. I spent a lot of time sadly mooching around Fort William (as I often do, it seems), looking at as many forecasts for the days ahead as I could find. The one in Nevis Sports showed improvement, especially for Tuesday, but still unsetted weather and visibility varying between "excellent" and "appalling". The forecast at Cotswold's, on the other hand, was more favourable and showed a distinct improvement even for Monday. Sometimes it pays to be optimistic in this game, so I decided to try for Gulvain on Monday.

Next morning I duly arrived at the gated entrance to Gleann Fionnlighe and set off walking at around 7.30am. The wind had dropped and things looked rather promising. I was keen to start using my new camera, a Sony RX 100, which I'd bought the previous weekend. The gate at the entrance to Gleann Fionnlighe

It's a long walk up the glen, but a very easy one on a good landrover track that invites the use of a bike. I began to wish I'd taken the trouble to bring my hybrid up. But the scenery was great and the weather very pleasant, so it was no hardship to plod along on foot. The Fionn Lighe at the footbridge After about an hour and a half the track had become a hill path starting to ascend the lower slopes of Gulvain, which were surprisingly free from snow. There's a fork here marked by a cairn. The left way leads up the Allt a' Choire Reidh. The right fork leads up Gulvain, winding its way nicely up the ever steepening hillside until it breaks into a series of zig-zags, which eventually deposit you on the upper slopes leading to the little top at 855m. It was only on reaching these upper slopes that continuous snow-cover began. Starting up the lower slopes of the south top View back down Gleann Fionnlighe to the peaks of Ardgour Though only shallow at this point, the snow had thawed and frozen into a hard crust of ice, so I put my crampons on to make for easier going.

A little further on I noticed a pair of ptarmigans in their winter plumage just a few yards away. By the time I'd got my camera ready they'd waddled off out of sight! It was a long, unrelenting slog to be sure, and the 855m top is further than you think, but at last you find yourself at the little cairn and the South Top is plainly in view not too far off. The South Top comes into view on reaching the 855m top. The North Top would be visible too if the clag cleared from it.

It was a pleasant walk up the snowy slopes to the South Top. Trig point on the South Top

Once you reach the South Top you feel you're getting somewhere.

It's quite a drop to the col and then all that height and a little more has to be regained to reach the summit, but it's all fine, airy walking with superb views. The ridge leading from the South Top to the summit The ridge leading up to the summit becomes surprisingly narrow at one point, and the snow, which was mainly quite firm, had formed an interestingly sculpted ridge of it's own. As I approached the summit the cloud lifted off completely and I was treated to clear views in all directions, but not necessarily of cloud-free hills! At the summit of Gulvain, looking NW into Glen Dessary

As I sat down at the summit cairn (at 12.00 on the dot) with my flask of coffee and cheese roll, I felt very lucky to be able to soak in the views in such pleasant conditions. 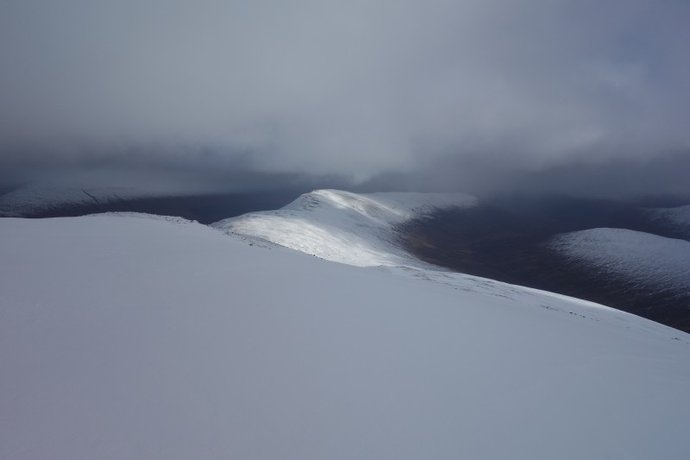 So now it was time to start back and there's no practical way to avoid following the same route, which means going up to the South Top again! Oh well, it's all good exercise. The clag was coming in again and I realised my timing on the summit had been very fortunate. Out of the clag again, looking down Gleann Fionnlighe

I took off my crampons at the same spot I'd put them on, and set off on the long walk back down the lower slopes and along the length of Gleann Fionnlighe. 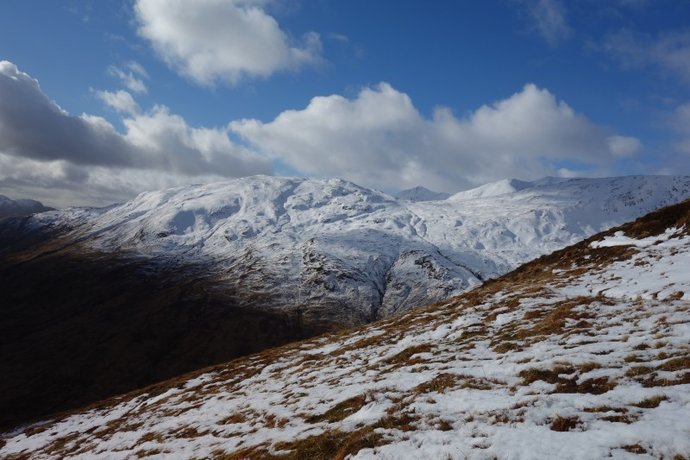 Rapids in the Fionn Lighe

I would have got back to the car earlier if I'd had my bike, but it was only 3.50pm anyway, so I wasn't too fussed. All in all a very enjoyable day with varied but good conditions and excellent views, and a great start to my trip!

As for the photos, luckily I uploaded them to my mini laptop, for on the following Thursday I managed to lose my brand new camera!

I'd stupidly left it on the memorial seat just above Succoth, Arrochar, when descending the path from the Cobbler. I went back for it that evening but it had gone. I was, to say the least, very upset, mainly with myself for being such a negligent idiot. I reported it as lost property at Dumbarton Police Station, and though the lady there was very friendly and optimistic about it - "walkers tend to be an honest bunch", she said - I'm finding it hard to hold out much hope of it being handed in. Not a good way to end a holiday!

Fingers crossed for the honest bunch then.

I'd be so angry with myself.

jacob wrote:Fingers crossed for the honest bunch then.

I'd be so angry with myself.

Yeah I've been beating myself up over this. Can't understand how I could have been so absent minded.

I found the shoulder of Gulvain a pain when I did it, but the efforts are worth it with the surrounding views.

Bad luck with the camera, are you covered with insurance for the purchase?

That did look enjoyable but quite a change in the weather higher up - nice ridge in summer but winter makes it look all the more dramatic. Pity about your camera - hope something turns up - cheers

Guinessman wrote:I found the shoulder of Gulvain a pain when I did it, but the efforts are worth it with the surrounding views.

Bad luck with the camera, are you covered with insurance for the purchase?

That's a very good thought GM - just the standard manufacturer's warrantee as far as I know, but maybe I should check out the house & contents insurance to see if that covers it. Worth a try, thanks

And yes, the views from Gulvain definitely repay the long slog; if you're lucky enough to catch them!

rockhopper wrote:That did look enjoyable but quite a change in the weather higher up - nice ridge in summer but winter makes it look all the more dramatic. Pity about your camera - hope something turns up - cheers

Thought I was going to miss out on the summit views for a while; I was very lucky that the clag cleared just as I got to the top, only to descend again just after I'd left - doesn't often work out like that! Thanks again.