Spotting this week's amazing weather window I booked a couple of days off work and headed to North Wales. Setting off from Worcestershire early on Wednesday morning I was at the Ty Nant car park shortly after 10, where I met John Moxham, my guide over the next couple of days. Having slogged up more than a few grassy, boggy lumps over the last couple of years I've become eager to find more exhilarating routes through my tick lists where I can. On Cadair Idris that means an ascent via the Cyfrwy arete rather than the usual Pony or Minfford paths. 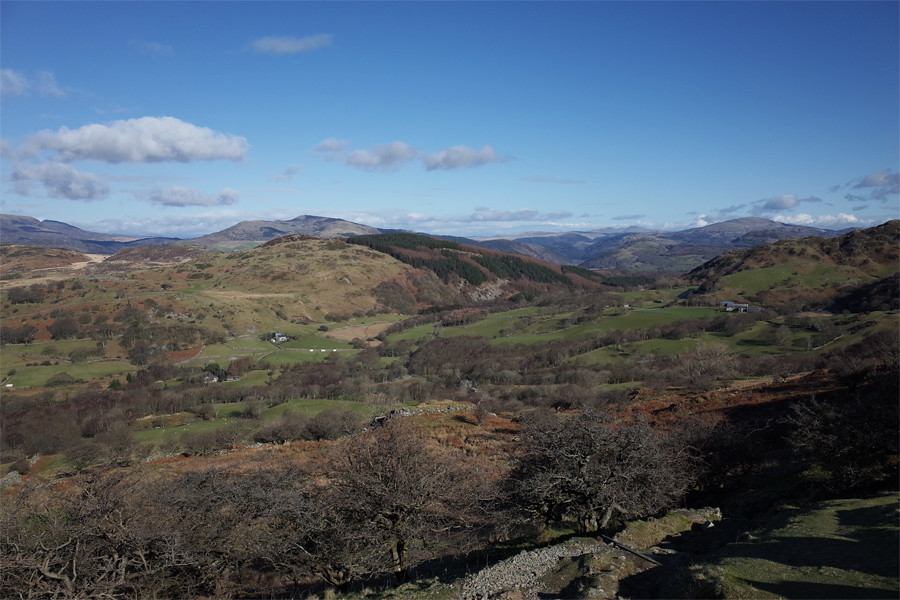 
John has climbed and guided all over the world, including the Alps and Himalayas but today would be a new route for him too. By modern rock climbing standards the Cyfrwy arete is pretty 'easy' (graded Diff) but we were taking nothing for granted. The rocks on this climb have a reputation for looseness and after the sudden drop in temperature many were cloaked in verglas. Setting off from the car park in glorious sunshine it was not long until we were in the cool shadow of the north face of the mountain. Locating the start of the climb required some delicate route finding, approaching over slippery screes and boulders. 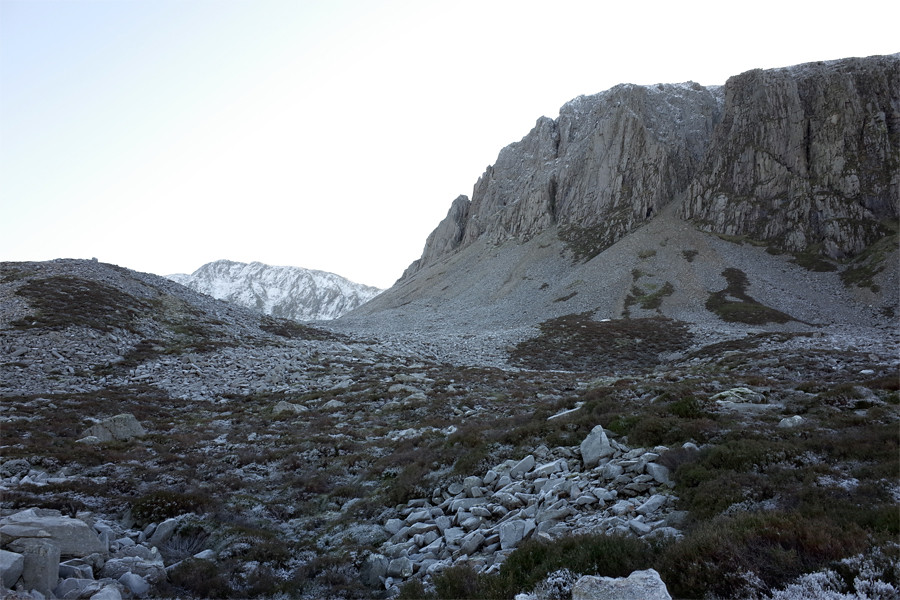 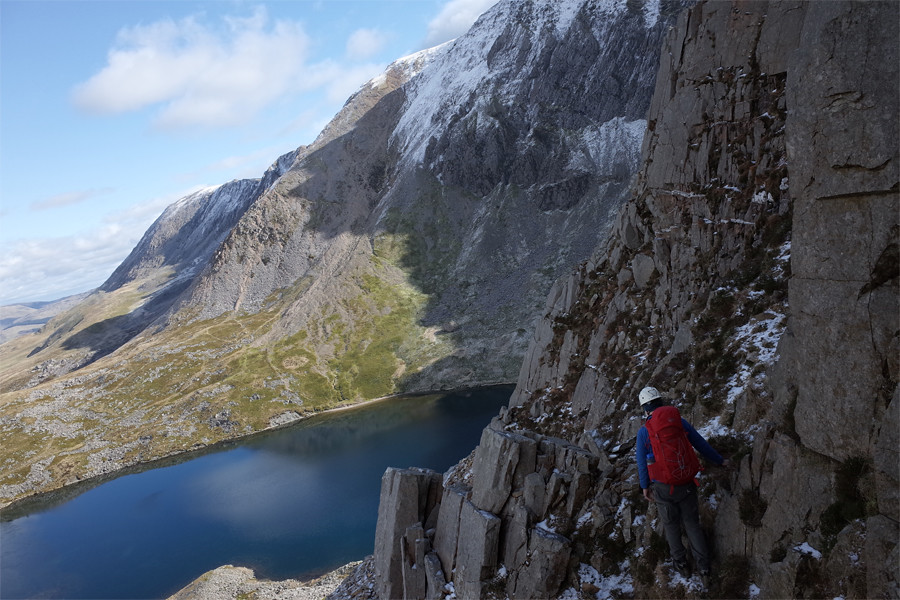 Finding our way to the start of the climb 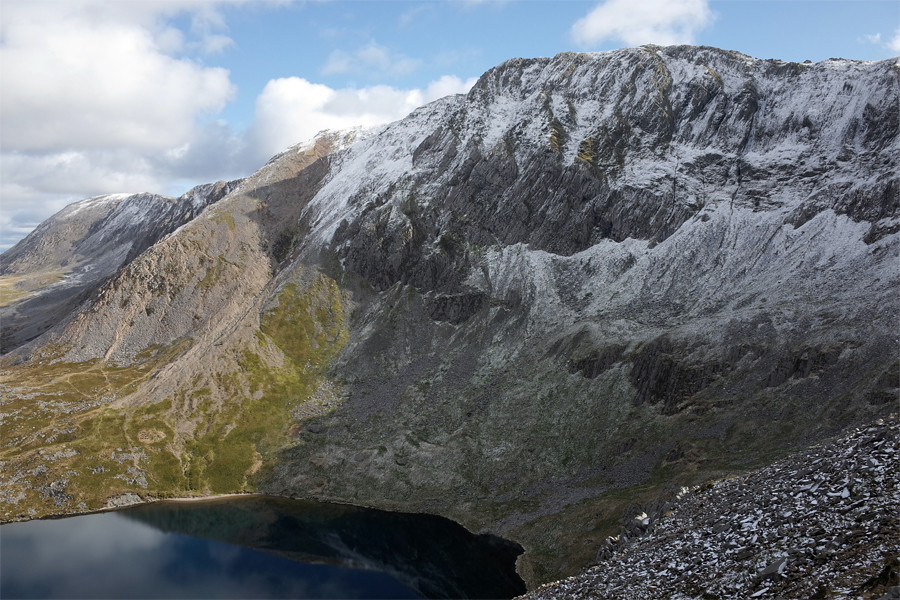 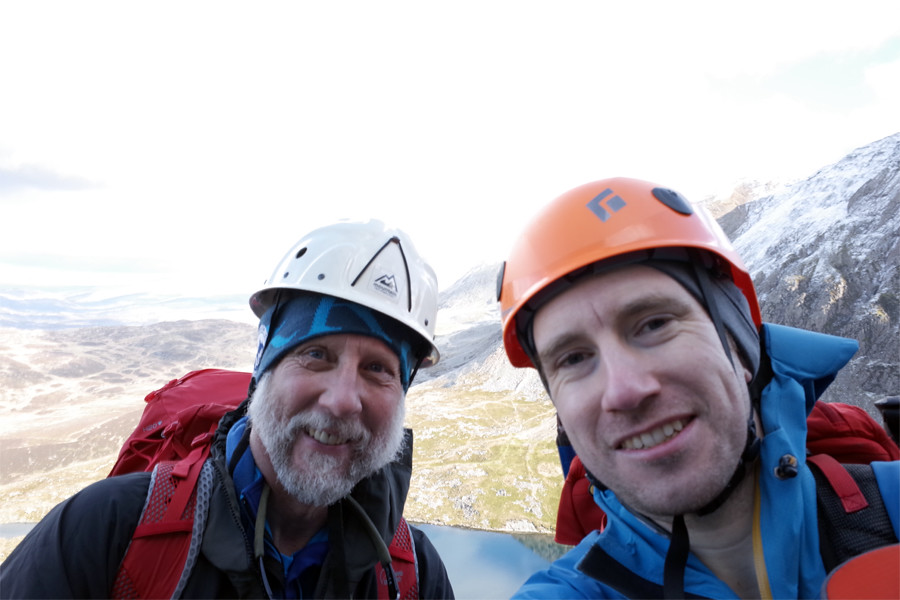 
John led all the pitches of what proved to be a very enjoyable climb. As we ascended the ridge I found that I had to remove my thin gloves to get a better grip on the rock. By the top I had pretty cold digits! While waiting at the belay points as John led successive pitches I was certainly glad of my super warm base layer. The first couple of pitches of the climb lead up to the 'Table' - a prominent feature on the ridge before a noticeable notch. Climbing down into the notch straight off the table looked a tricky proposition with the slippery rock and we found it easier to retrace our steps off the front of the table then climb round into the notch up from the right. 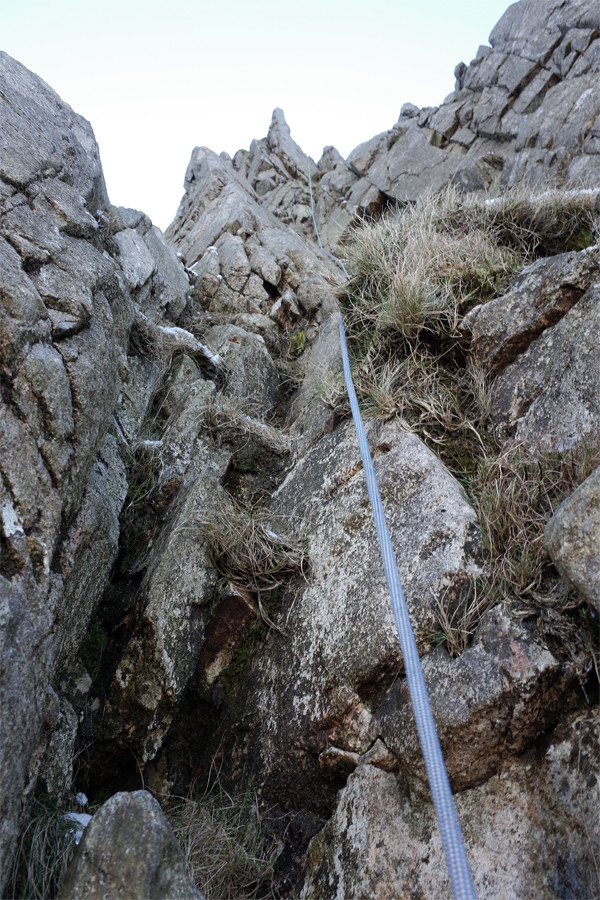 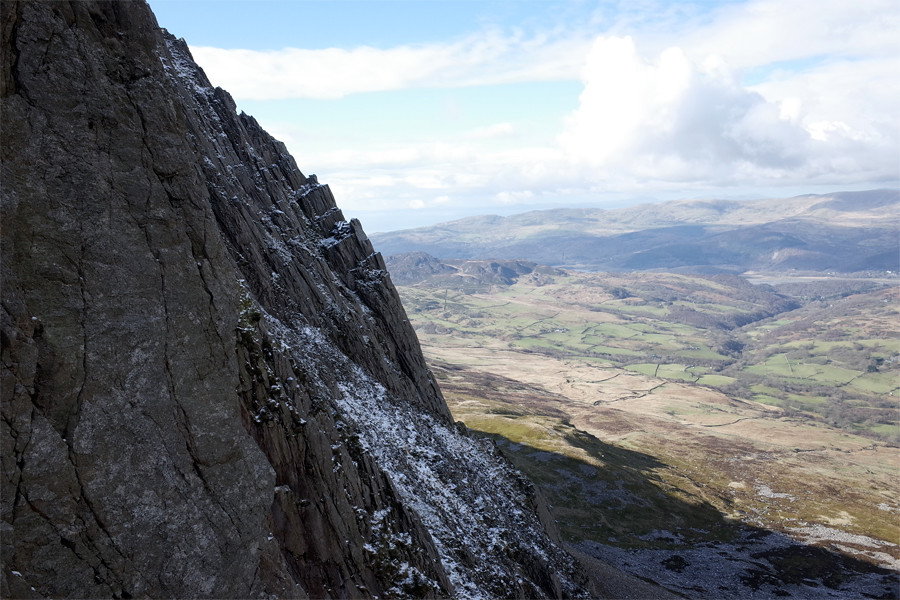 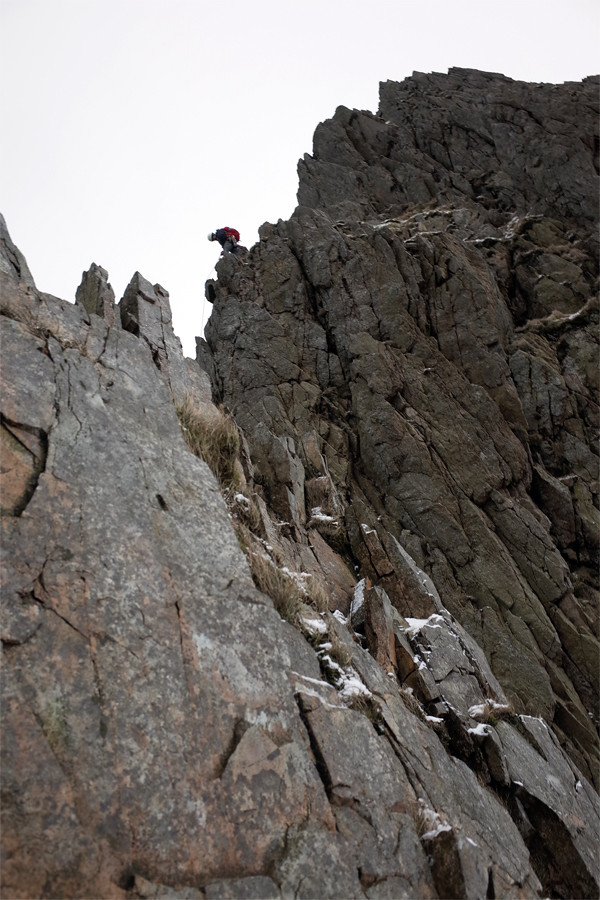 John sets the next belay


The pitch after the notch was the crux of the climb and was slightly harder than the first pitches. After that most of the difficulties were over though and we were able to scramble unroped for the last section of the ridge. The sky had clouded over during the afternoon and after a couple of brief snow showers we topped out onto the summit of Cyfrwy. From there we did not have much further to walk to the summit of Penygadair. We had not set off from the car park until 11am and there had not been an opportunity to stop on the ridge so now at the summit I wharfed down my lunch with gusto and a real sense of achievement in getting up the ridge. We had the summit to ourselves and had not met a single soul all day - a real privilege on a mountain as popular as this, and in such great conditions. 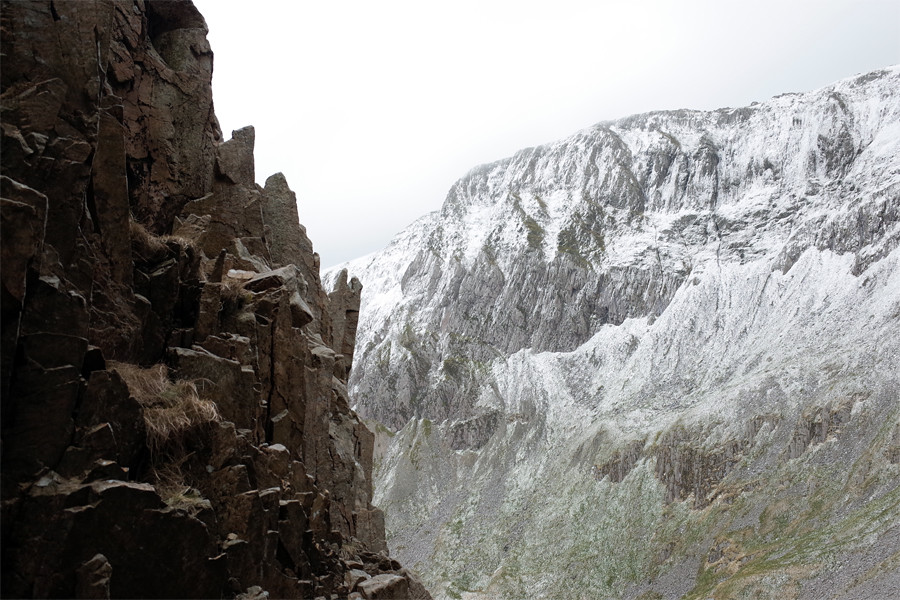 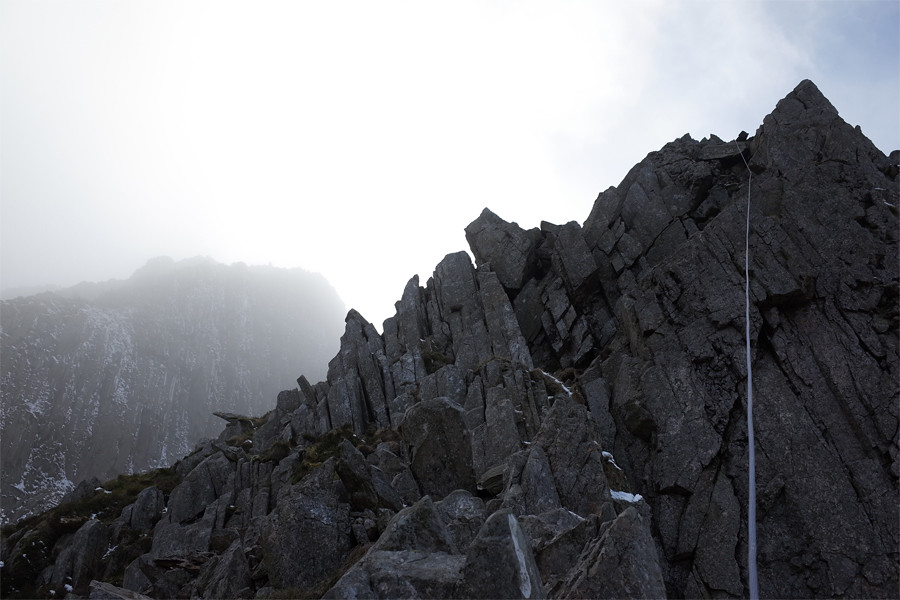 Nearing the end of the ridge 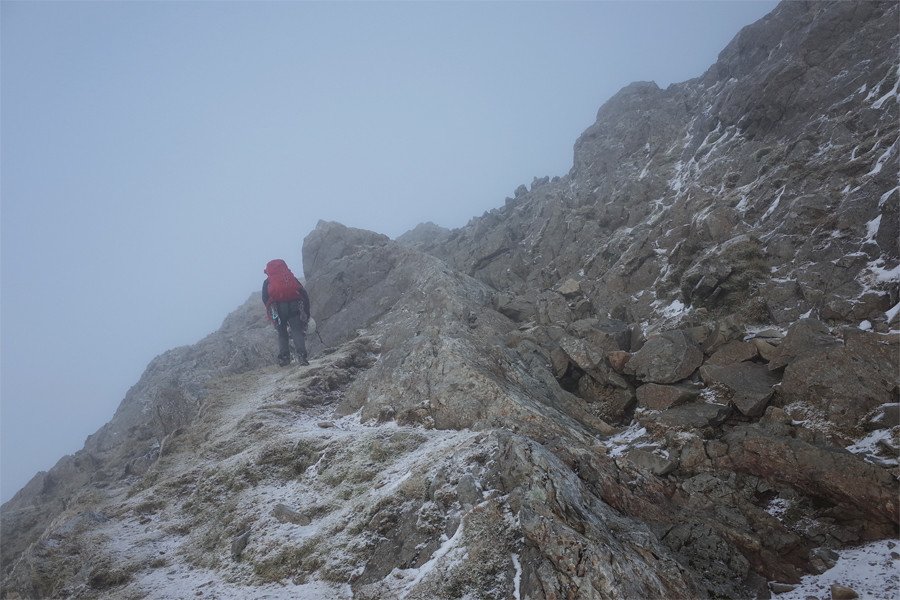 
During our descent we enjoyed a terrific sunset out over the Irish sea and made it back to the car park not long after dark. For a hill walker like me this was such a great day. A real change from my normal routine. Although the pace is somewhat different (with more of a stop / start feel during the climbing pitches) the adrenaline and excitement that comes from a climb just adds an extra dose of enjoyment to a day on the mountain. It was certainly a physically demanding day. Much more of an 'all body' work out than a regular walk. And while I'm pleased to say that my hill fitness seems good at the moment (so far this year no complaints from those irksome ilio-tibial bands) I realise that climbing poses a different threat to the joints - as the big yellow bruises round my knees attest! While I doubt that I'll ever become a hard core rock climber pushing extremely tough routes, these 'easier 'classic mountaineering routes hold a definite appeal to me - you get a tick in the list and a really good buzz in the process. Tower ridge on the Ben is surely on the cards now. 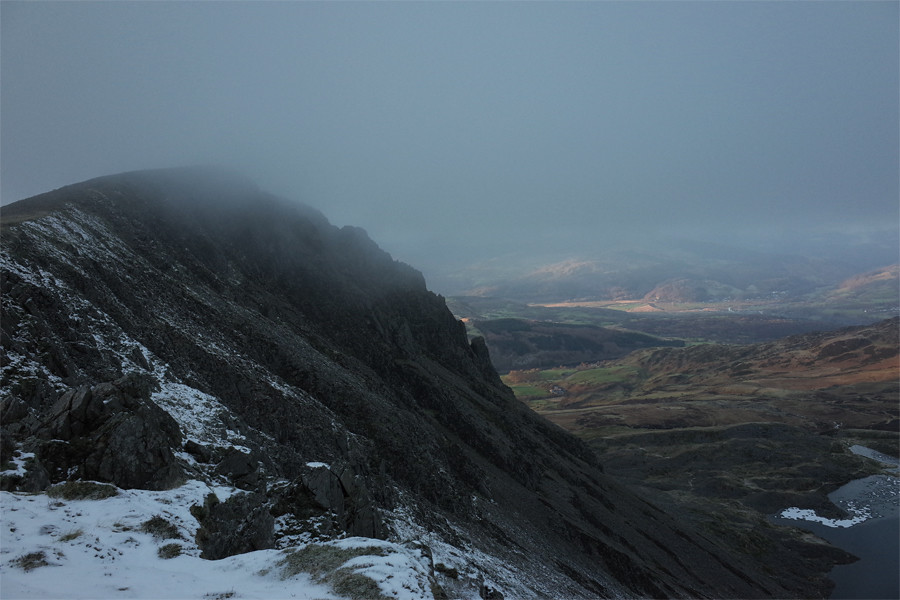 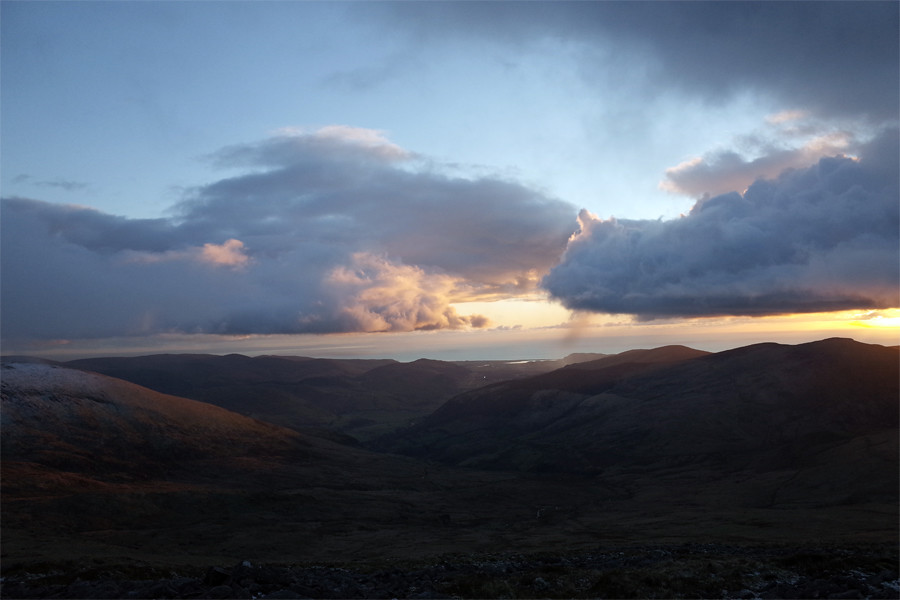 The Cyfrwy arete has a very alpine feel to it and the exposure on large sections of the ridge is considerable. If you want to add a bit of spice to your Welsh Hewitt bagging this is certainly the way to do it. The climbing was relatively straightforward - decent hand and footholds throughout, though some loose rock. That loose rock makes the leaders work placing protection harder still while anyone following has to test each foot and hand placement before putting weight on it. We carried a 60m rope and a selection of nuts and hexes - no friends/cams. Helmets were on all the way up the ridge. While we carried axes and crampons they were not needed.

For Thursday I wanted an easier day as it had been a long and tiring day on Cadair (8 hours). We talked about Sentries Ridge on Mynydd Mawr but in the end decided Tryfan was the obvious choice. It was the one summit on the Glyders I had not climbed and would be a quicker drive from Betws where I was staying. 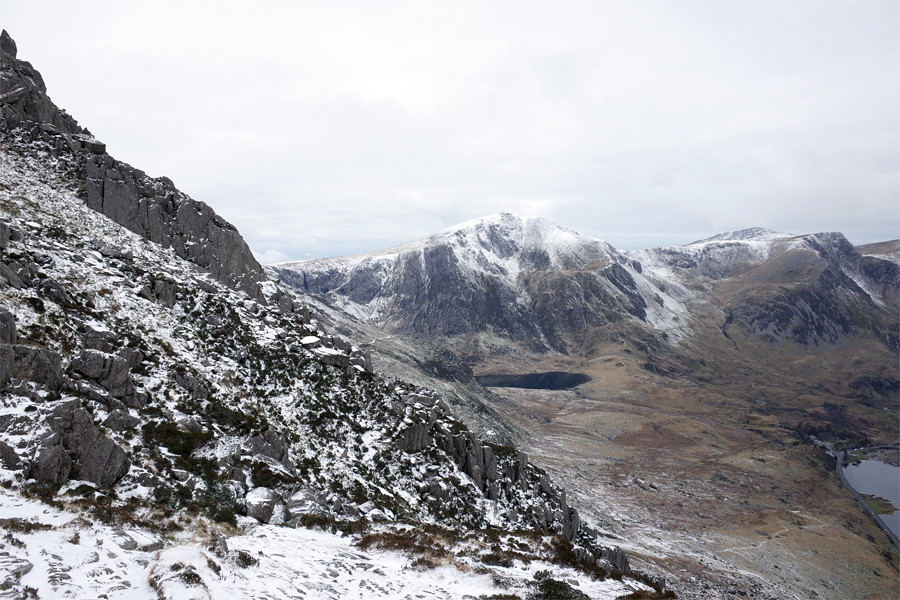 
From the A5 height is gained extremely rapidly on Tryfan. It's quite funny reviewing the GPS track (albeit that mine is truncated as I forgot to switch it on until more than half way up!) - the whole route is less than 5km yet it feels so much further than that. The scrambling was really great fun. John told me he's climbed Tryfan so many times yet never bores of it. There's so much potential to vary the route that no two climbs of this pocket battleship of a mountain are ever the same. I'll certainly be returning in the summer, perhaps to make the leap from Adam to Eve (iced rock meant that would not have been a sensible move this week). 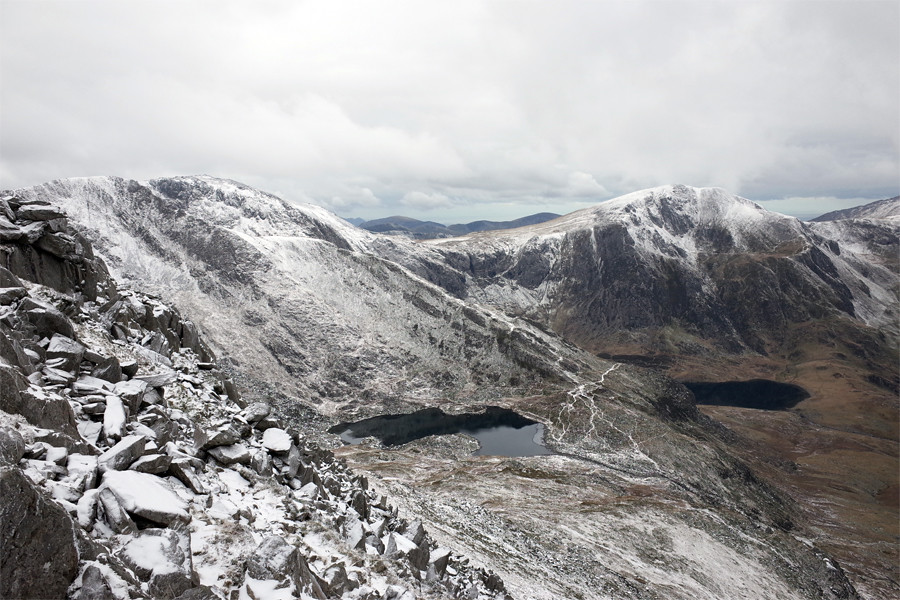 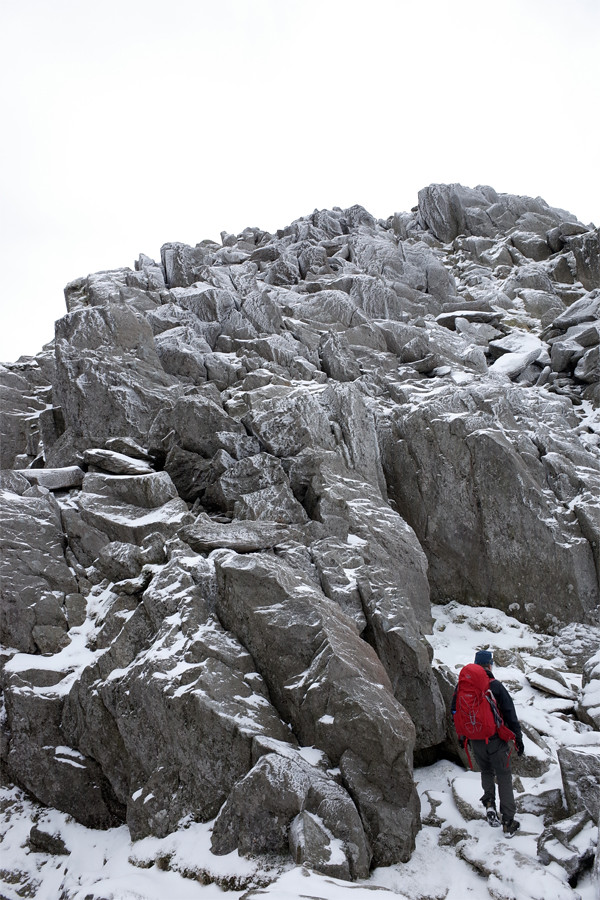 During our ascent we saw RAF Hawk trainer jets blasting through the Ogwen valley. Always a great buzz. Visibility remained good throughout the day. It had snowed overnight and the temperature was still very cold. During our descent we had great views of the slopes of Glyder Fach. I noticed Bristly Ridge (which I climbed in 2014) and the bypass path that J and I had climbed together shortly after our engagement in Snowdonia in July last year. At the time J had found the bypass path pretty unpleasant going. Having climbed Bristly Ridge I was probably not as sympathetic to her concerns as I should have been. But now, seeing both routes from the slopes of Tryfan I have to eat my words. While Bristly Ridge is obviously more exposed, nobody would call that bypass path a particularly pleasant or easy way up Glyder Fach. From the slopes of Tryfan it looks grim. 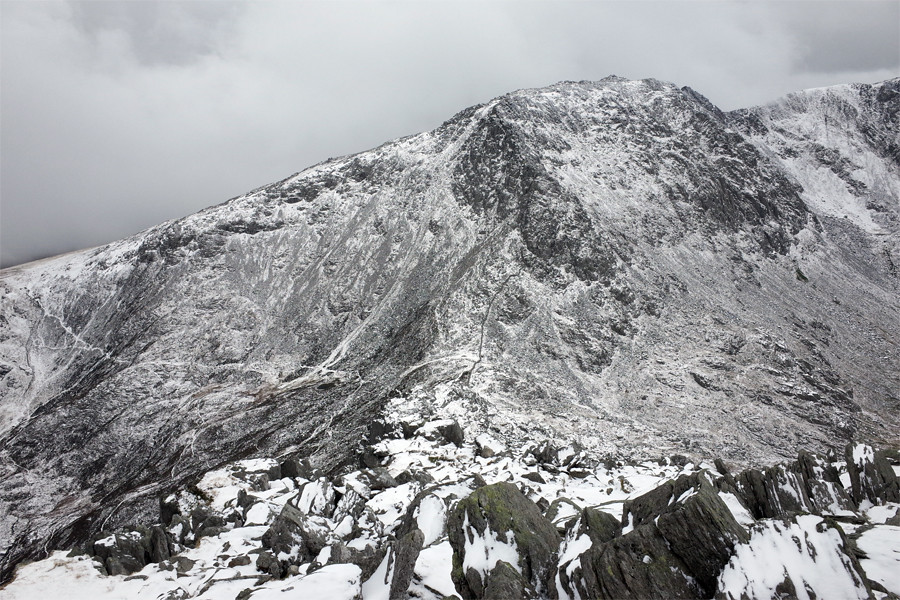 
All in all these were a cracking couple of days. John Moxham is an excellent guide and I hope I'll be able to climb with him again on some more of Snowdonia's harder scrambles / easier climbs. I would wholeheartedly recommend John to other Walkhighlands members heading to Snowdonia. To anyone thinking about adding more scrambling and rock climbing into their time on the hill, I can only say - do it!

tryfan.gpx Open full screen  NB: Walkhighlands is not responsible for the accuracy of gpx files in users posts

cyfrwy.gpx Open full screen  NB: Walkhighlands is not responsible for the accuracy of gpx files in users posts

Looks a really interesting climb and exciting enough in summer, never mind at this time of year!

Reminds me that I must get down to North Wales again (I served my climbing apprenticeship there), and especially to Cadair Idris, which I've never been up. Great report.

Thanks for this - Cadair looks really interesting, and for some reason I've never given it any thought as a scrambling/climbing location. Will definitely give it a go now!

Cheers guys. It's surprising how many of the Welsh Hewitts can be scrambled or climbed. I have Sentries Ridge on Mynydd Mawr on my list, as well as the south ridge of Rhong Fach.

The Climbers' Club Meirionnydd guide is interesting to dip into. Sadly though most of the routes in there are well above my grade and classic mountaineering routes are somewhat scarce. I get the impression that modern rock climbers don't have much time for these kinds of routes and are more focused on really hardcore stuff with dreadful sounding names.

I was planning on heading to Cadair Idris the first weekend of April and doing a couple of days on it to have a day walking and a day doing some more technical scrambles (weather permitting) so this made for a great and enticing read! Thanks.

That's a great looking ascent Riverman with some really cool shots along the way. Climbing really does work you hard though and is a very different thing to hiking/scrambling. Years ago I used to love climbing, nowadays I just don't have the energy

Really enjoyed this, congrats on taking this on and completing in winter