Great forecast for the weekend - family stuff on the Saturday but free on the Sunday and my better half was off to play golf. Earlyish start from Glasgow - parked in the wee layby just past the bridge after Caolasnacon on the south side of Loch Leven. There was a car already in the layby before the bridge. Short walk back towards the bridge then took the track which heads SE up the hillside.

Most of the boggy section had frozen over so just had to avoid slipping.

Euphemism for unrelentingly steep is....gain ground quickly. Hardly a breath of wind and getting warmer as the sun was starting to rise.

Up over Torran nan Crann then on to Stob Coire Sgoilte. Garb Bheinn looming ahead.

Picked up a track here and there with some old footprints as an aid. Not a lot of snow higher up but very steep in places - decided on crampons and ice axe before it got too steep and slippery. 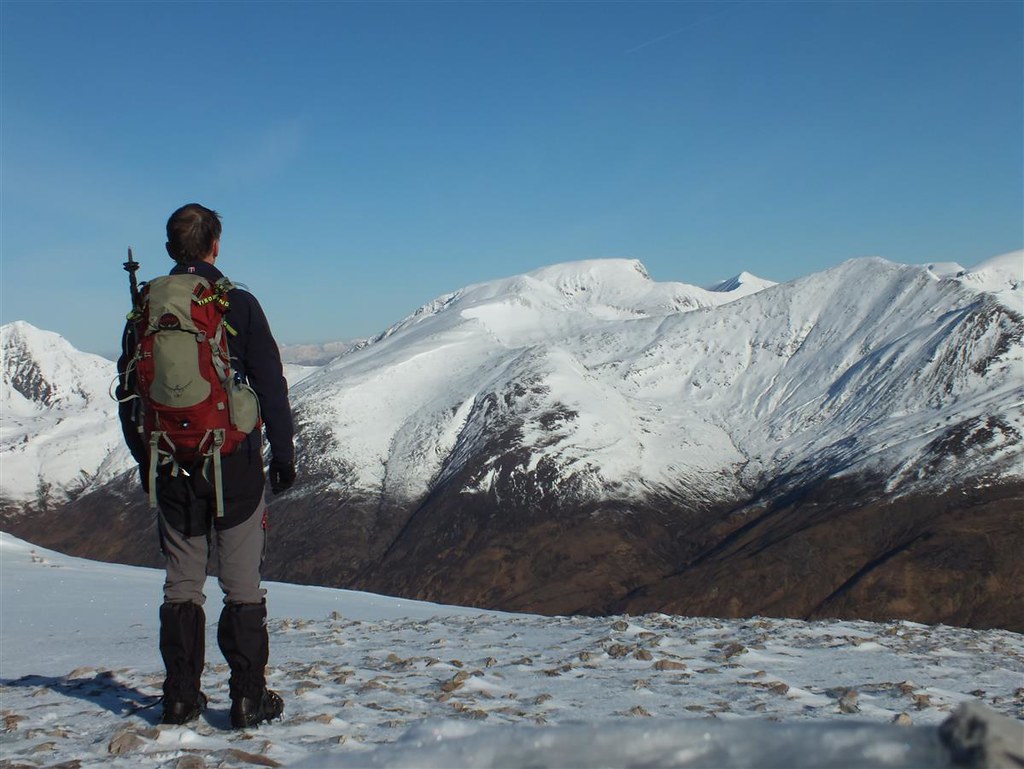 Down to the village

Set off back down taking a few photos on the way

Met a couple of walkers on their way up. Had a long chat about hills and trains then wished them a good day and continued on.

Back at the car just before midday - too nice a day to head home so had some lunch and drove over the bridge and round to just past Callert House - parked in the wee layby behind another car.

A bit hazy in the distance but could see over towards Glencoe. Think this is An t-Sron / Stob Coire nam Beith

Just past the end of the trees, started more directly NE up the hillside. Became a lot steeper with snow soft and deep in places - made the going a lot harder.

Tom Meadhoin didn’t look to far away with relatively little ascent required. Would probably have had time to get to it then get back down to the car but looked as though much of the way would be in soft snow which didn’t really appeal. Decided against it and headed back down to the car - a couple of days later the legs are feeling the effect of the ascent, must do some more stretching....

Oh wow what a perfect day - and photos to match! I'm gutted not to have been free at the weekend to enjoy such stunning conditions.

That weekend was really great !

I love the winter shots

Really enjoyed looking at these photos and seeing the mountains from different angles.

When I saw the title of the report I thought you meant the Central Belt Loch Leven and the Lomond Hills, then I thought Surely that's too easy for Rockhopper !!!!

Some really excellent pictures, particularly the zoom of Bheithir and the view across to the other Garbh Bheinn.

Brilliant photos!! Well worth the effort.

Up to your usual standard RH, fabulous photo's

Just a shame we don't have more weekends like that, especially when the white stuff is covering the high ground

What a magical day and a superb collection of photos.

With scenery like that who would want to be anywhere else? Beats golf that's for sure!

Well done for deciding to go up the second Corbett.

I thought the last one I commented on showed Scotland in it's very best light....maybe I was wrong

Amazing photos - was a day to be out wasn't it!

They're all brilliant but this one In particular is fab

Wonderful photos, what a day you had

haven't been up that way for a while - given the gip my calves were giving me on Tuesday, definitely not too easy !

Fife Flyer wrote:Just a shame we don't have more weekends like that, especially when the white stuff is covering the high ground

ceud taing [with thanks to google

Pleasure to read and see