Set off in search of snow (after getting Moss microchipped for the third time as she lost the previous two, please if you have a dog CHECK THEIR CHIP to make sure it is still there and still working

). Checked Moncreiffe Hill but no snow there so headed down to the Lomonds but no snow there either, so we decided just to head up East Lomond since that was closest from Creaigmead carpark and around 3 miles return, according to the sign anyway though my map on WH suggests closer to 2.5 miles return, so within range for RD (Retired Dog).

Figured it would be a good chance for Fly to try out her new coat, just as well she was wearing it as it did start snowing on our way back! The walk is pretty simple, one long track to a gate, follow the track to the start of the uphill then roughly follow the path up, I say roughly as it was muddy in parts and therefore some slight detours were needed. For me anyway, the dogs just went up, down, left, right, even taking to the air on occasion... 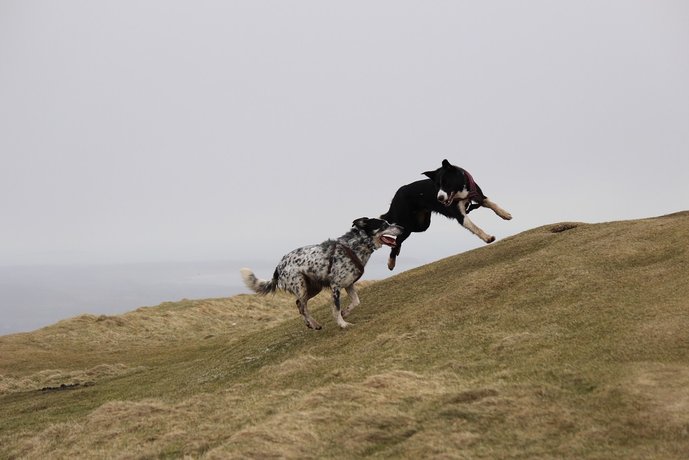 At the summit it was windy and the snow was starting so we didn't hang around long and soon headed back down the same way. On the way the snow became heavier, but a bit too late for that! Re: East Lomond with RD

Dogs had more fun than you?

Re: East Lomond with RD

alfredo wrote:Dogs had more fun than you?