Merrick’s my local hill, seen squatting on the southern horizon as I drive out of the village. To be fair, it’s not that local as I’ve still got a thirty-odd mile drive to get there, but it’s great to have it relatively close-by, to stretch the legs when the opportunity arises.

And, as I hadn’t stretched my legs on anything remotely resembling a hill since a quick Tyndrum Corbett in mid-December, I was desperate to snatch the opportunity offered by a clear day – in terms of both weather and commitments.

Having trodden the Glen Trool route in each of my last few forays to Merrick, I thought it was about time a variation was tried. I’d not been up the adjacent Kirriereoch Hill before, and the spur of Little Spear, plunging from the summit of Merrick, had been recommended to me the week before.

In an oasis of sun amidst the depth of this wet winter I arrived at a deserted picnic spot near Kirriereoch Loch on the Straiton road, to the west of the hills. Off up the track, I soon passed Kirriereoch cottgae’s personal wind turbine, and followed it north then east into the woodland until a small bridge crossed the curiously-named Pillow Burn. 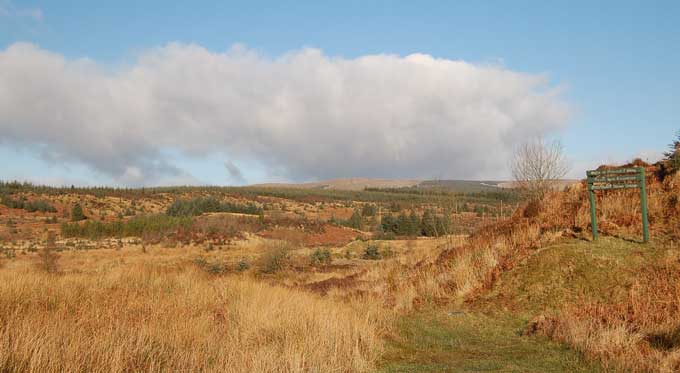 A bright start by the Water of Minnoch picnic spot

Here, the vestige of a path up a fire break, close to the burn, lured me away from the forestry track: a lesson I should have learned for later in the day.

As is so often the case, the so-called path petered out within minutes. However, the way onwards was obvious and at least the edge of the forest was visible ahead. Progress was made by teetering on the multitude of tussocks, meandering around the squelchy patches and occasionally clinging to the strands of a fence to avoid plunging knee-deep into some hidden depths.

At last, the trees were left behind and the Cross Burn made a half-hearted attempt to bar my way onto the open hillside beyond. A gradual climb, following obligatory rusting fence posts, lead to the Carnirock Stone from where the day ahead could unfurl. The long spine of Kirriereoch Hill stretched away, while across the glen the steep northern slopes of Merrick marked the edge of my return journey.

Merrick from Carnirock Stone on the lower slopes of Kirriereoch Hill

A stiffening breeze at my back, clear skies, and crisp ground underfoot between thin patches of wind-blown snow all combined to make progress a pleasure. A scattering of cairns alongside the wall and across the final dome of Kirriereoch Hill gave plenty of choice for the top, but sadly none were big enough to provide shelter while lingering to enjoy the views.

The gentle slope of Kirriereoch Hill

The flattening plateau of Kirriereoch Hill 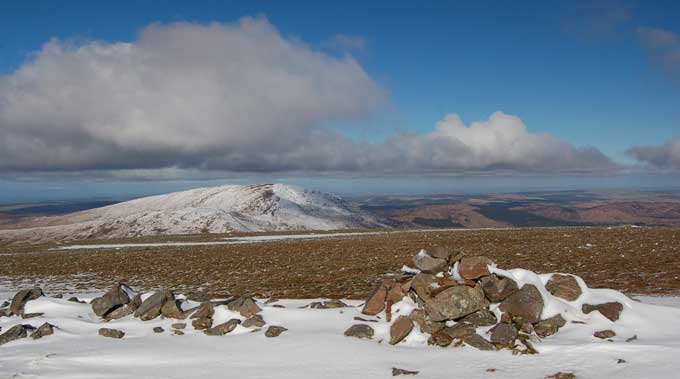 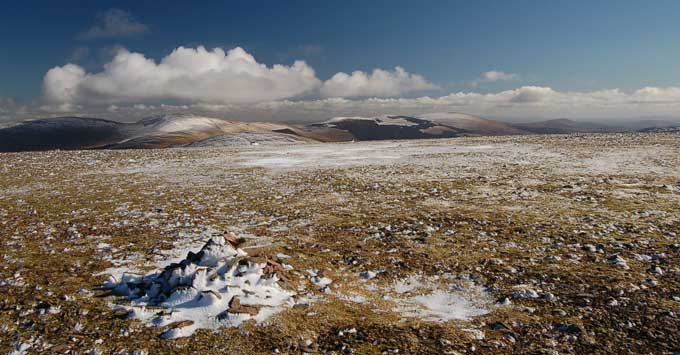 Summit cairn of Kirriereoch Hill - a scant place to shelter

So, with Little Spear beckoning below the bristles of visitors gathering round the cairn on Merrick I descended to the bealach.With impressive views across the Black Gairy to the right and the banked cornice of snow edging the bowl of the Howe of the Caldron to the left, Little Spear makes for an interesting wee scramble. The snow was solid enough for support but not hard enough to require anything more than a firm kick and balance from a walking pole: the winter gear could stay attached to my sack and be simply felt as a training handicap to regain that hill-fitness lost over Christmas and the long-past New Year.

Merrick and the Little Spear ridge from Kirriereoch Hill

Finally, the familiar snow-bound shelter and cairn of the summit burst into view.

The panorama from the top of Merrick is one I can sit and absorb for ages. North, beyond the sweep of the Ayrshire coast, the snow-tipped Campsies and the Highlands stretch across the horizon. Goat Fell and Cir Mhor stand proud on Arran and Ailsa Craig floats like a dumpling on the Firth of Clyde. Then, as the view swings from west to south, it’s filled by Ireland, the Isle of Man and the hills of the Lake District, before coming to rest on the closer Galloway hills.

Looking north, back to Kirriereoch Hill from Merrick

Gosh, we’re so lucky: and not a soul in sight.

When my ears started to go numb I decided it was time to depart: this will be a doddle I thought. Follow the wall westwards and then, once over Kirriemore Hill, find a forestry track along which I could stride out and return to the car. Six or seven kilometres: an hour and half at most.

Little did I know.

The bit along the wall was fine, the snow still crisp and a gently descending angle didn’t jar the joints. Leaving the wall behind, a steeper stretch was easily descended, before the ground changed. Tussocks abounded, each defended by a semi-frozen moat of gloop: straight line walking was impossible. Then, hidden talons of emerging heather grabbed my ankles, tripped me and became a thorough nuisance. By the time I reached the low point of the bealach below Kirriemore Hill energy had begun to dissipate and any enthusiasm for going over it rather than round it had disappeared altogether. 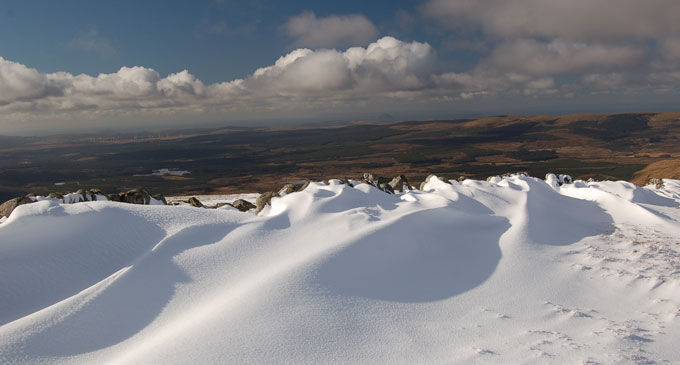 Snow-bound walls and the west from Merrick

Merrick and the Black Gairy

Once the forestry fence was reached, the prospect beyond looked no better. There may have been a track in there somewhere, but finding it was going to be a challenge. Tree stumps, roots and rotting debris weren’t going to make for easy progress, neither was the dense growth of young trees further ahead. Firebreaks had yet to be cleared between the wall of fledgling pines so dropping to the Kirshinnoch Burn seemed the only sensible option. There was bound to be a track down there.

A flickering glimmer of optimism remained.

For the second time in the day I decided to follow the break in the trees formed by the burn. For the second time in the day I found myself struggling. The occasional stretch of gravel at the edge of the water allowed stuttering progress – until a bend, a collapsed bank, a fallen tree, a morass of tangled roots forced a mini-detour. I knew there was a bridge lower down that would get me across the burn and also finally onto a proper track.

Well the map said there was.

I then started to wonder if the winter storms and floods had done their worst. Was it still there? The evidence of high water levels was all around me, playing havoc with the way I wanted to go. Meander after curve after bend and still no bridge.

Then I saw the track across the burn, just fifty metres away. Should I try to boulder-hop across, was there anywhere to wade? No, of course there wasn’t. So, with a seeming sense of self-satisfied glee, the track just kept on beckoning as if it knew it was just out of reach and annoying the hell out me.

Finally, nearly two hours after leaving the top of The Merrick I saw my Holy Grail: the bridge, the track.

After over two months off the hills, my legs were feeling “it” now. Lactic or lethargy: both had to be overcome for the last mile or so back to the car. But at least I knew there was going to be no battle, just a weary plod for the final half hour of the day.

It had been a typical sandwich day: Frustrating start, brilliant filling in the middle, with an unrelenting hell at the end.

Think I’ll be back round in Glen Trool for my next visit. Not a failure, just finding another way that doesn’t work as well as it should.

Re: Kirriereoch, Merrick and the foul western approaches

Hi Nigel, glad to see you are out and about again

Enjoyed reading that, as always - and seeing what views the Merrick has to offer, especially considering when Karen & I went up the Merrick the views were non existent

We also had an awful lot more snow on our visit

Re: Kirriereoch, Merrick and the foul western approaches

Doesn't sound easy but some great views. Having grown up in D & G I suppose I better go there one day. I'll go the easier way though!