It was taking far too long to get 2016’s Munro count going. So, when a promising forecast coincided with my wife’s birthday and long-standing plans for a group of friends coming for dinner and staying overnight, I thought some inventive planning would be needed.

In the end it was a simple solution. Barely four hours after retreating to bed, well after midnight, the plaintive bleep of my phone stirred me and I was on the road north by 5.30am, guests and family barely aware of my departure. Plonking bowls of cereal and mugs of strong coffee in front of bleary-eyed guests when they emerge for their Sunday papers doesn’t require a huge amount of culinary planning, so I felt no guilt.

Like many, I’ve a handful of targets that I’d only entertain during the coldest of conditions: high-level bog-trots have little to commend them. The traverse between Beinn Bhreac and Beinn a’ Chaorainn above Glen Derry is one such trip. Reports abound of tiresome plodding, unavoidable boggy ground and curses, oaths and forthright industrial language being used when even gaiters disappear below the surface. However, a brisk march across frozen ground, in spectacular surroundings, would be just the ticket.

I was booted, suited and even had my gaiters on in the utility room before leaving the house as I suspected how cold it would be in the Cairngorms. I wanted to leap straight into action from the warm cocoon of the car rather than faff with frozen fingers.

By 8.15am crowds were gathering as I drove over the pass at Glen Shee, the skiers clunking their way from the car parks, oblivious to the fact that they were crossing a road and that not everyone wanted to hurtle quickly downhill. By 8.30am it was minus 9 as I passed through Braemar to find surprisingly few cars at the Linn of Dee car park given the forecast. A clutch of rime-encrusted cars suggested the bothies above were occupied, and a couple of camper vans awash with condensation hinted that their occupants were reluctant to emerge.

But I was raring to go.

The Lui Water and the way to Derry Lodge

I’d made a temporary repair to dodgy front brakes the day before, but it was only when I dragged the bike from the back of the car that I gave any thought to what the state of the tracks or paths might be. Stripes of ice streaked the road, and then I was greeted by a few hundred metres of snow as I turned to head for Derry Lodge. Interesting, I thought.

Fortunately the snow, ice and gravel were all crisp enough to make cycling in a straight line easy enough, and there are mercifully few bends to make speedway turns necessary. The crunch of tyres on ice and snow echoed in the stillness and warned a couple walking their dog of my approach. Little did I know, they would be the last people I’d see for the next five or six hours.

With the bike chained to a drainpipe half an hour or so later I set off up Glen Derry.

Glen Derry and the knobbly Beinn Mheadhoin in the distance

Accompanied by the scrunch, scrunch, scrunch of my stride, I could easily have been mesmerised by the surroundings to continue sauntering towards the knobbly skyline of Beinn Mheadhoin in the distance. But, Beinn Bhreac was up there to the right; I had to start some climbing soon.

Guides differ in their advice, and I’m usually hopeless in spotting any discreet cairns that mark departures from the main path. So, searching for a “vague path,” was pointless. I waited until I expected to be somewhere below the bealach between Meall an Lundain and Beinn Bhreac and struck up into the trees: upwards, ever upwards.

Derry Cairngorm from the slopes of Beinn Bhreac

Once above the tree-line, the dome of Beinn Bhreac lived up to its name: the speckled hill. Unlike the snow-clad heavyweights opposite, patches of heather and gravel gave the hillside a pock-marked look. By now I knew the day wasn’t going to be the easy march across frozen ground that I’d hoped for. The snow was granular or powdery and in very few places did it hold any weight. Plodding and plugging was going to be the order of the day. At least the ground underneath the snow was frozen so I didn’t need to fear an unexpected plunge.

The dome of the speckled Beinn Bhreac

Bare, wind-blasted and speckled describes the top of Beinn Bhreac. It’s a classic boring hill in spectacular surroundings. Ninety minutes after leaving the bike at Derry Lodge I was perched on a flat stone doing the obligatory “taking it all in.” The air was still, the sky a deep blue, snowy peaks dominated the horizon in all directions, and I was alone: completely alone. Despite telling worried friends the night before that I always chose popular routes for my solo winter walks, I couldn’t see a soul. I’d expected to see cross-country skiers enjoying the expanse eastwards toward Beinn a Bhuird. I thought others would share my desire to exploit the frozen conditions to avoid a potentially boggy trudge, especially on a Sunday. I searched in vain to see tiny figures moving across the skyline of Beinn Mheadhoin or Derry Cairngorm.

The Cairngorm Giants from Beinn Bhreac

Tracks from a couple of walkers who had passed the same way the day before were my only company.

Now Beinn a’ Chaorainn beckoned. Across an expanse of snow its twin domes looked a temptingly easy and short meander. The SMC guide suggests an hour and forty minutes to cover the five kilometres, but hey, it’s frozen, it’s nothing more than a brisk march, it’s one of those rare opportunities to stretch the legs and cover ground quickly.

An hour later and the snowy domes appeared to be no nearer.

I’d sussed out the patches of snow that would hold my weight and tried to follow the compressed footsteps from the previous day’s visitors where it was clear it wouldn’t. As the ground started to rise, my pace got slower, snow got weaker, and the domes still appeared to be retreating before my eyes.

Then the hills played a cruel trick, they twisted the knife and reminded me who was boss. As I approached the eastern shoulder, thinking the top was just a few hundred yards to my left, a summit appeared: miles away. My heart sank before my brain got into gear. Bynack More had come into view. With relief I plodded on.

On reaching the summit cairn of Beinn a’ Chaorainn I was glad I was on my own; nobody was there to witness my pace or the exhaustion that must have been etched on my face. It had taken me as long to get between the two Munros as it had to get up the first from Derry Lodge: so much for the brisk march.

Lunch, a half hour break to do the “taking-it-in” thing, and I was ready begin the journey back. I suspected that I would not have to worry about crossing the Glas Allt Mor but didn’t want to take the risk of having to add more to the day than was absolutely necessary. Although heading back over Craig Derry was an option, I was in downhill mode now. Making a bee-line for the point where the Glas Allt Mor starts its plunge to the glen below, I ploughed down the slope and aimed to contour round before dropping diagonally down into the upper reaches of Glen Derry.

I only hope that from below nobody saw my tracks in the pristine snow and thought it would be beneficial to follow them upwards if they were doing the route in reverse. They’d need very long legs.

Dominating the view on the descent was the vast bowl of Coire Etchachan, the Hutchison Hut nestling somewhere in the shadows of the surrounding crags. The fluted sides of Derry Cairngorm formed the backdrop to Glen Derry, and the soft snow still supported an easy descent to the track below. Looking back up the slopes of Beinn a' Chaorainn

As Glen Derry embraced me at the start of the day and could have been enjoyed without heading to the heights above, in descent it’s just as alluring. Wandering through the remnants of the ancient forests is so much more enjoyable than being surrounded by the artificial arboriculture that pervades so many glens. Up Glen Derry and the crags of Stob Coire Etchachan 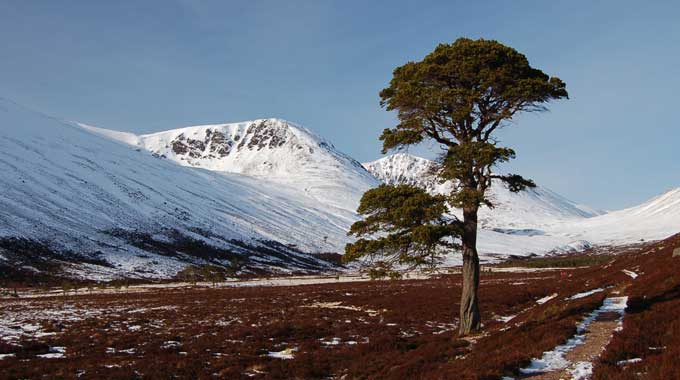 Glen Derry and a remnant of the Caledonian Forest

As the return to Derry Lodge meandered through woodland, I ignored the opportunity to cross the footbridge to the opposite side of the glen, curious to see where I should have started to climb earlier in the day. I still failed to spot where the outward and upward path should have left the track, or even spot where I’d left it myself.

The final stretch of the day down Glen Derry

Back at Derry Lodge, I retrieved the bike and slithered my way back to the Linn of Dee. The day’s sun had softened the snow and gravel and made it a more interesting return, especially the final slope to the road where it was all too easy to gather speed – and remember that my brakes weren’t as effective as they could be. That speedway turn that was avoided on the way out was exhibited at the end of the day – and fortunately without spectators.

Seven and a half hours out in spectacular conditions had been well worth the effort of an early start and a spot of sleep denial. All that remained was the drive back home. Having seen so many images of the devastation caused by the winter floods on Deeside and the extent to which the river spread itself across the whole of the valley floor, it was quite a contrast to see stretches of frozen stillness now confined between the banks.

With lots of enduring images I headed south and joined the snaking solid line of traffic that wound its way from the Glen Shee ski centre all the way to Blairgowrie. After being blissfully solitary all day, it was quite a shock to see the thronged masses emerging from their own part of the hills – and they still didn’t seem to give a damn about the fact that they were crossing a road.

The Munro year has started: where next?

Good report, camped up that glen last year - is a lovely spot, especially around the woods. We climbed Beinn Bhreac, in mist and soft underfoot though - didn't go on to Chaorainn - definitely one for ice and snow!