It has been a while since we did this climb, back in August last year, so I'm a little late - but was inspired to make a note of the walk as I've been unable to do any climbs in the last few months

.
This was an amazing climb and the first foray in to Torridon for me, so opened my eyes as to what a great area it is. With pretty good weather forecast and more or less clear of mist, we got great views and photo's, which may be of interest to those planning the walk, as I know I was scouring the walk reports to try and visually map the route before hand!
We set off, after a brief mishap of starting from the wrong car park - we started from Beinn Eighe car park until realising Liathach was not really in front of us... The real car park is a fairly wide lay-by surprisingly close to Torridon, there was great sunshine, clear views - there was initial midge fear but that soon subsided - makes me feel warm to think of it now in March! Looking down at Glen Torridon and opposite hill, Seana Mheallan Looking up at the route from the start

The climbing is immediately steep, with great views quickly opening up of Glen Torridon. The path is well trodden and clambers around rock outcrops, following a stream until it opens up in a wide corrie, buttressed between steep, sometimes vertical black cliffs. The path itself continues a little to the north- west, which at first sight looked improbable, but the route soon becomes apparent. Looking down at the corrie and Glen Torridon

We ascended a very steep final section before getting up on to the ridge, with the views expansive to Beinn Eighe in the north. Stuc a' Choire Dhuibh Bhig lies to the east, but we had no plans to go up this top - although I can imagine it would be worthwhile. The path and ridge is narrow, although not crazy, and pretty easy to climb over, but certain members of the party certainly found it a bit airy! Up on the ridge A view east from where we joined the ridge, and the top of Stuc a' Choire Dhuibh Bhig

After some rocky false summits, and clambering over pretty steep sections up and down, my sister hugging the rocks, we finally made it up to the first Munro, Spidean a'Choire Leith. The weather had clouded over by now, and I was not relishing the idea of going around the Am Fasarinen pinnacles, so we had a refuel stop and continued after a debate over whether to continue. I thought everyone would be fine doing the pinnacles and we all decided it would be a shame to miss them. The wilds to the north of Liathach The initial descent is boulder filled and steep, with no well defined path. We made sure not to join the south ridge and as it was clear this was no problem. Might need more careful navigation in mist or winter. 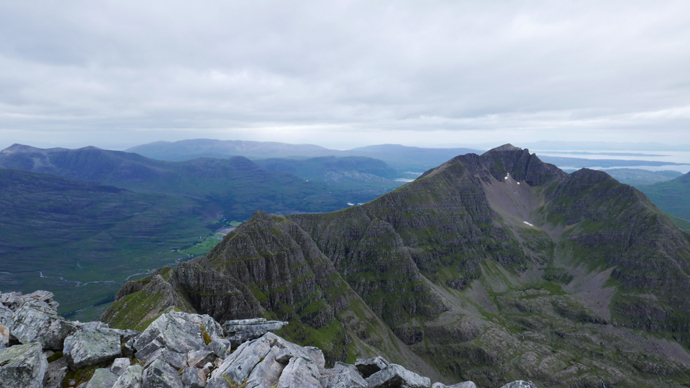 The path to the pinnacles, coming down from Spidean

The start of the pinnacles walk is a fairly gentle path that soon has a steep slope to the south, with occasional views to the north. It is a great path and we took plenty of stops for photos and to clamber over the trickier sections. Going around the heads of gullies being the most precipitous parts. Traversing the pinnacles, on the western side. More steep path action - look down if you're holding something! From whence we came...

After the pinnacles, with everyone's nerves settled again, we walked into the cloud up the great slab of the cliff edge that leads down to the corrie under Mullach an Rathain. Here there were more mutterings of discontent as we couldn't see much, but with a good path and a clear direction it was no hassle. We soon got to the top, everyone a little tired now. Ross was on a big comedown from all the energy bars he'd eaten hours before. The route was obscured in cloud, but looked interesting to continue to the north, but I had organised to head off the usual route as described on WH. This was one of the trickiest sections, navigation-wise. With thick mist we couldn't spot any path and descended on a ridge to the west of the corrie leading down from the summit. This was a bit of a mistake as it soon turns cliffy, but we were able to descend back into the gully with no trouble. Interesting trying to find a route down.

My sister and I went ahead to pick up the cars, and after what seemed a long time, we finally got to the road, pretty knackered. My feet didn't enjoy the last few km down the road as I had some new Scarpa scrambling shoes on that were a little hard under foot.

We got the cars ok, in failing light, looking nervously for the other three coming down, but seeing no sign. They did get there though just as we drove up. Back to the lovely hostel for a massive dinner, and plenty of fine beers in the lounge room to celebrate, which looks out, fittingly, at the western cliffs of Liathach. A great climb up a fantastic mountain.