I have been trying to think of a clever play on words with a Loch Glass theme but failed, hence the boring title. Any ideas?

On arrival at the end of the public road, memories flooded back of my last visit to this area. That was in August 2000. I had hired a bike (from square Wheels in Strathpeffer) to cycle up the side of Loch Glass before heading up to bag the Ben Wyvis tops of Fiaclach and Glas Leathad Beag before heading for the main summit. The bolts holding the handle bars came loose so that the handle bars twisted and slid through making it very difficult to control the bike. The shop did not give me any tools so I tried, with some success, to use a small angular stone to tighten the bolts. However, I could not tighten things enough and things soon came loose again. This meant that it took a lot longer to cycle back to the car.

The SMC guide to the Grahams and Donalds suggests going through the white gates across the River Glass and following the track northwestwards, crossing back to the other side across a concrete bridge, but I walked back along the road for about 200m and accessed the forest track where there are four gates. Then headed left at the T junction seen in the photograph below.

After about a mile, there is a clearing and one sees Loch Glass for the first time with the backdrop of Glas Leathad Beag. This is surely one of Scotland's finest lochs. Being a natural loch, there is no ugly scum line around the edge. There is a curious pink lodge on the far bank. 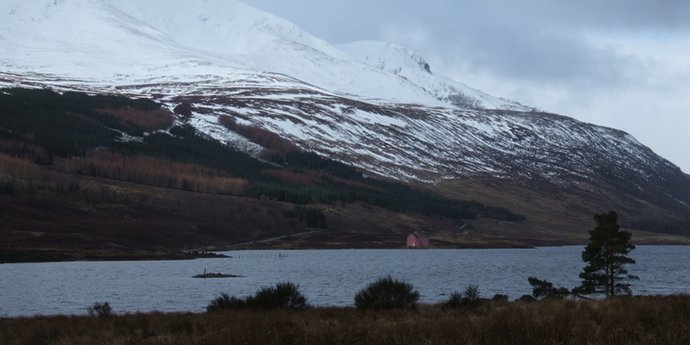 The route heads diagonally up right along a lesser track. This was wet underfoot but the gradient was about right for gaining height without being too strenuous. 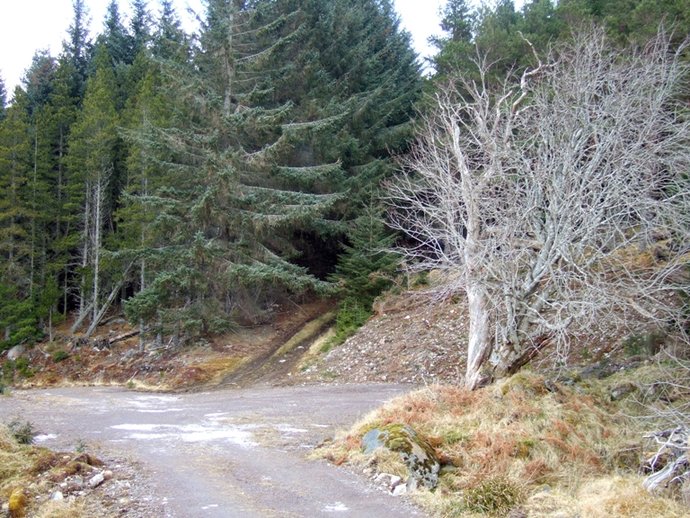 As I gained height, I began to hear the wind turbines up above. Eventually, the track clears the forest plantations, giving fine views along much of the length of Loch Glas. The track dips a little before joining another track. When the track met a fence, I headed up left to join the dip in the ridge north-west of the Novar wind farm.

Once on the ridge, there was a certain amount of peat hag to negotiate, but being frozen made progress relatively easy. There was a faint track for much of the way though it disappeared where there was peat hag or deeper snow. I always enjoy treading across pristine snow and the lack of footprints gives the feeling of being the first, even if many have trod there before. In some sections, the snow was soft and knee deep. 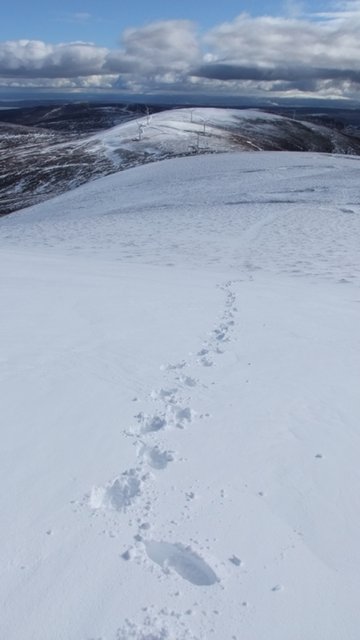 Looking back to Nova Wind Farm

Higher up, snow had begun to melt and then froze. The fresh snow had mostly been swept away by the wind, leaving a firm but icy surface. I eventually reached some fence posts which I followed past a pile of rocks (not exactly a cairn) to the trig point (see photo below). I placed my Gorillapod on the trig point for the summit photos 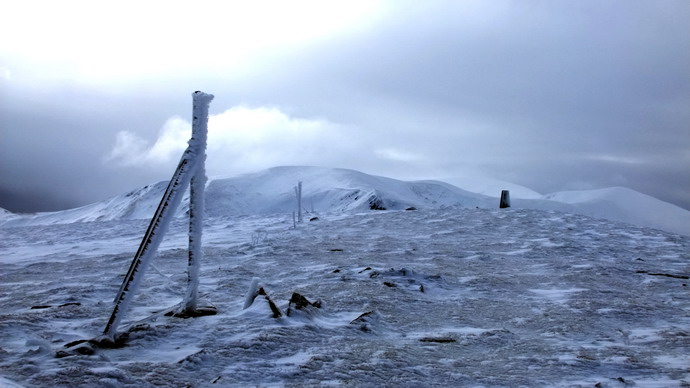 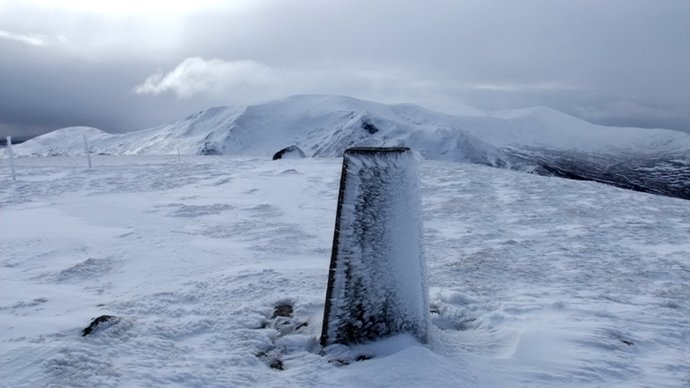 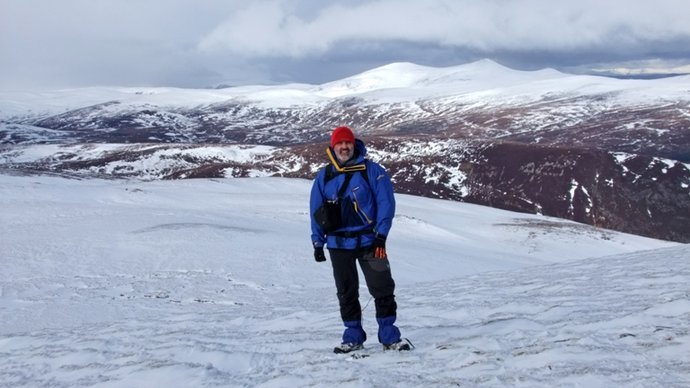 Looking towards the Corbett Carn Chuinneag 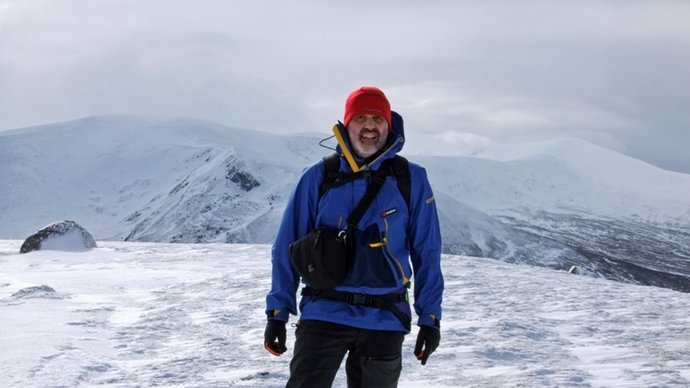 I was only wearing thin running gloves and rather than changing them for one of the warmer pairs in my rucksack, I headed back down. My hands soon warmed up, once moving. I thought that I would enjoy a feast of Jaffa cakes once back on the main track heading off into the forest. On arrival back down in the glen, I zoomed in on the pink lodge. It looked as someone had opened the windows to give the place an airing. I thought about how it would be an interesting place to stay, especially with a boat and fishing rods. 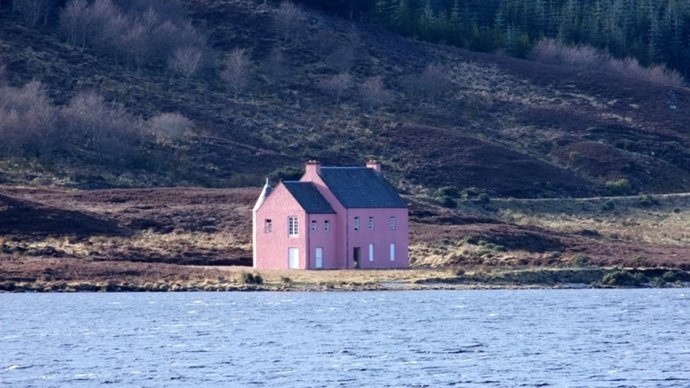 Many thanks for this one!

One of few local hills I haven't done yet. I've been thinking about going up from Boath side and past the wind farm, but this route looks nicer.

I remember when i wrote my TR about A'Ghlas Bheinn, the title was something like " Raised my glass on A'Ghlas"

BlackPanther wrote:Many thanks for this one!

One of few local hills I haven't done yet. I've been thinking about going up from Boath side and past the wind farm, but this route looks nicer.

I remember when i wrote my TR about A'Ghlas Bheinn, the title was something like " Raised my glass on A'Ghlas"

I did consider Heart of Glass - I've been listening to Blondie recently!

With me being relatively new to walking out in the great outdoors, i found your report very helpful as a guide, when i went up there today, thank you.

For anyone else reading this report or planning using ideas off this report, in 2018, please be aware that the "bear right...." area now looks completely different, the woodlands around this right turn have been clear felled of any trees, it now looks very similar to a right turn about 500 yards, before this turning (also with a clear felled area around it)' the old tree and the turning point in the reports bear right photo, is an important bearing if you are new to the game like me.

Again thank you for the great report.