I've been waiting for my first hill since the accident with great impatience. Low level walks are OK but nothing can replace the real satisfaction of touching another cairn. Even if it's just a tiny one on a small Sub'2.
I kept my fitness on a reasonable level by walking 7-9km every day and my knee's progress was satisfactory if a little bit slow. Well, I can't expect, after major trauma, to be hopping like a young lamb in three weeks time (I leave that to Lucy the Lamb

) ! But I felt I was ready for a small hill on Sunday. Kevin suggested returning to Dufftown area to visit the Convals. We had deliberately kept them for a wintry day and it looked like Sunday's weather was exactly what these wee neighbours of Ben Rinnes needed.
I was positive I would be able to climb the twins, but didn't expect to break any record. It wasn't about running up them, more about testing my leg, how it would react to uphill and downhill movement. I had experienced knee injury before (paradoxically, also after banging my knee against a hard rock, though with no cut involved) so I knew that the descending was always the worst part. I didn't want to risk getting stuck half way down something steep and pathless, hence the choice of easy, round hills with paths/tracks most of the way.

Initially we intended to do the WH route, but I found Heather's report suggesting a shorter version with less walking along the road (thanks for the idea

). This route starts from a wide layby at 304372 (next to Convalleys farm), goes over both Subs and then descends back to B9009 only 2 km north from the starting point.Total ascent about 550m, which seemed enough for leg testing but not too much to make it sore. Or so I hoped

our_route.gpx Open full screen  NB: Walkhighlands is not responsible for the accuracy of gpx files in users posts
We were surprised by the amount of fresh snow in Dufftown area (Beauly had little, but we are close to the sea). The layby was a bit boggy but had more than enough space for Black Arrow: 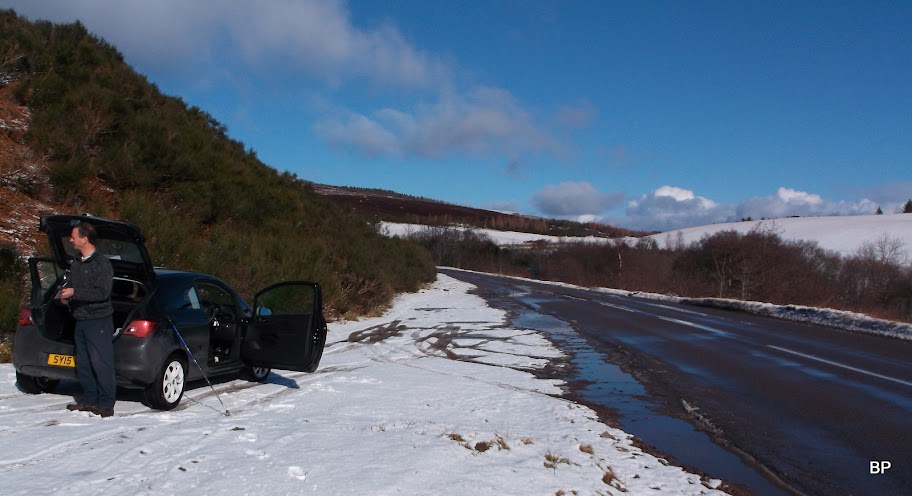 After walking a short distance along the road we found the track climbing the eastern side of Meikle Conval. Easy so far:

We took our time, strolling up the hill at a lazy pace. I was a bit weary and didn't want to push too quickly (though my inner wild nature felt like running!). At least we had plenty of time to admire the white landscape around us and to enjoy the last moments of winter: 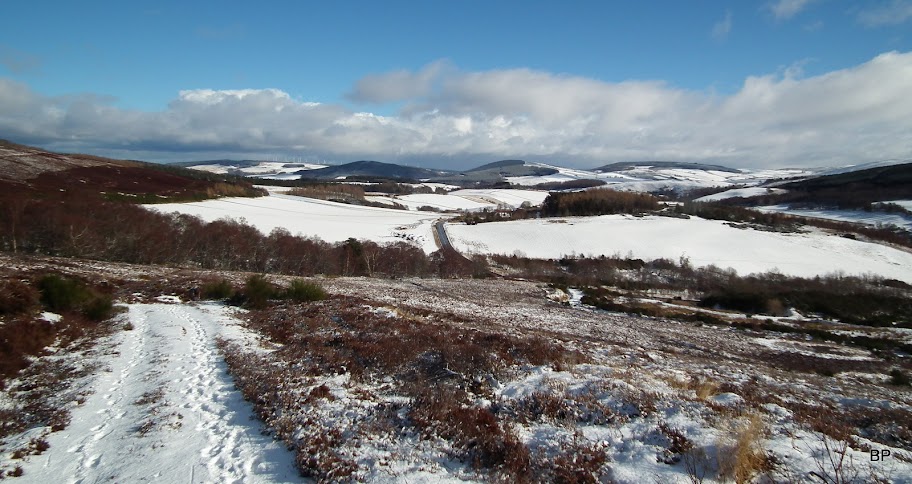 The surrounding rolling hills still held on to the white stuff (it's most likely all gone by now):

This one has a peculiar name - Jock's Hill. Got no idea who Mr Jock was.

Meow! So good to be back!

There was plenty of weather moving around us, mainly fluffy cloud, lingering just above the summits. At some point it descended onto the top of Coryhabbie Hill just south of us:

Why are there always windfarms in sight?

The track ends about 100m below the summit of Meikle C. I imagine there must be a path to the top, but it was covered in snow, so we simply pushed up the heather. I allowed Kevin to lead the way and used his footprints. Ha, ha, let the man do the job

I wanted to avoid stepping into a hole hidden under snow or twisting my leg badly on a rock. At the moment it felt just a wee bit awkward.
The summit of Meikle Conval is a superb viewpoint, especially to Ben Rinnes. We have already climbed the Corbett twice (once in winter), but this wee neighbour, despite modest height and no tors, is a good sidekick to add to Rinnes route on a longer day. In conditions we had, white/blue/fluffy gray, we couldn't believe our luck - fantastic atmosphere for photos! 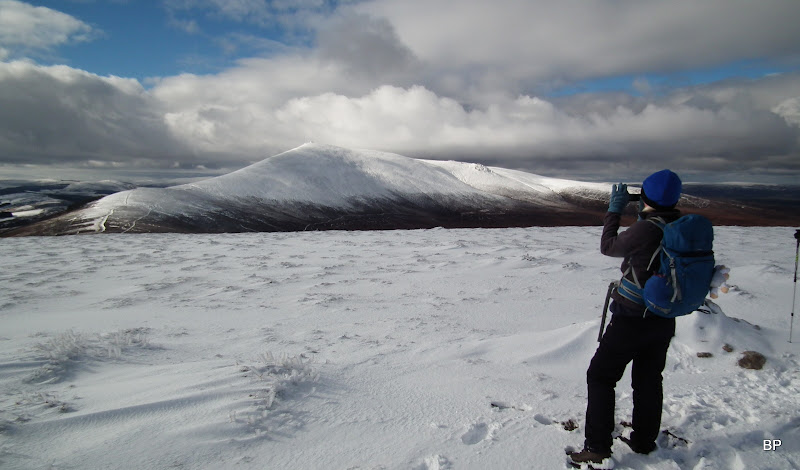 Lucy traveled with us... to bag her second and third Sub', respectively.

Views from the summit - Coryhabbie: 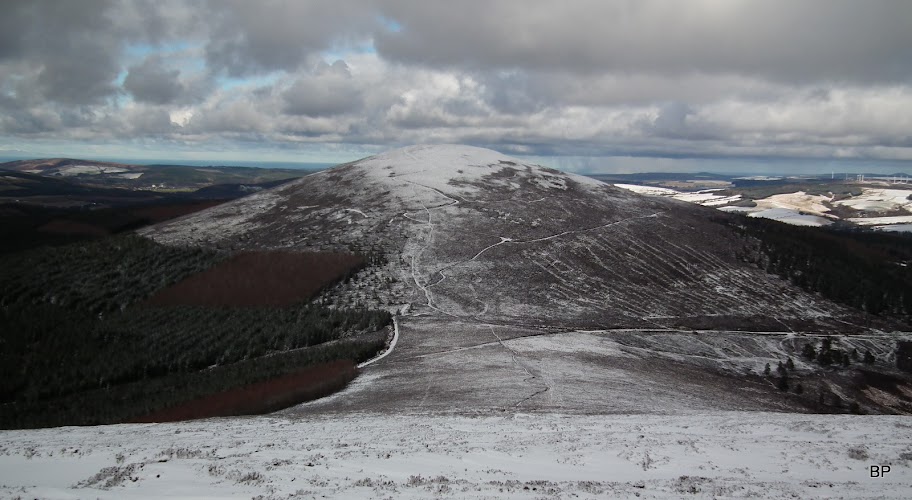 Zoom to Scurran of Well. We explored these tors last year, under snow cover they look even more intriguing:

Rinnes - a couple of details: 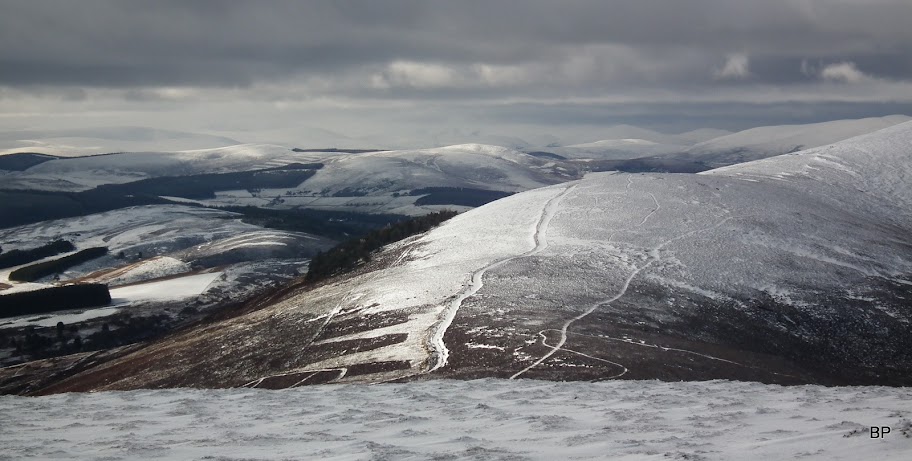 Having snapped enough piccies to satisfy any photographer, we continued north, to descend to the col between the two subs. This was the most worrying time for me and I suggested, we took zigzags rather than go straight down. I spent a few minutes fighting my gaiters (snow was getting into my boots, ha ha ha) then began the descent slowly. The knee still felt awkward and any serious twist sent slight pain down my leg, but as long as I was careful, I actually managed quite well as for 3 weeks after 7 stitches. We found the path at some point, but it was covered in ice and it was easier to simply walk down the snow-covered vegetation. Meikle Pap loomed above us:

As we reached the col, we noticed that the weather changed quickly. A large, dark cloud was passing above us and the blue sky (and good light with it) was gone.
View east from the col:

Moody Rinnes - what a change!

Gazing up the slopes of Pap, I was preparing myself for another uphill test. Can you do just a little bit more, Panther?

Even if it took some time... 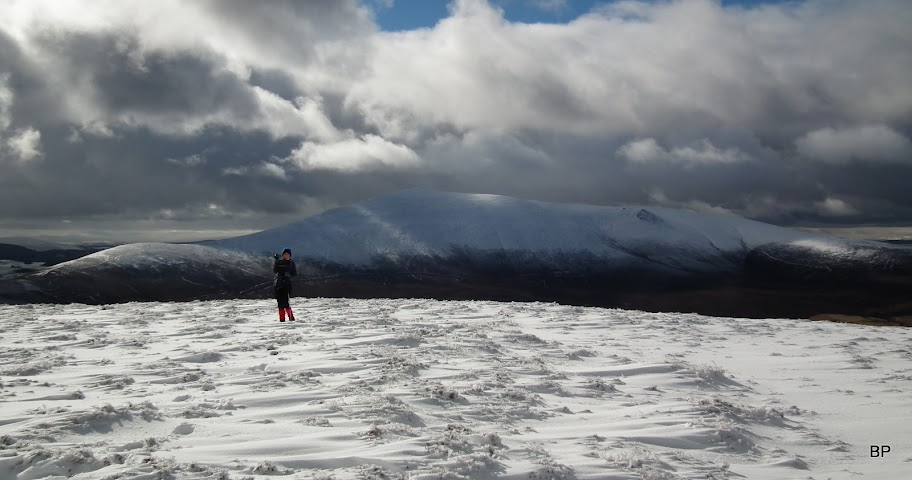 The track goes up almost to the very top of the second sub. There is a trig point marked somewhere on the summit plateau, but we never found it - it's not on the highest point anyway. The top is marked with a tiny cairn, but I felt more than tiny satisfaction when I touched it!

The top of Meikle Pap: 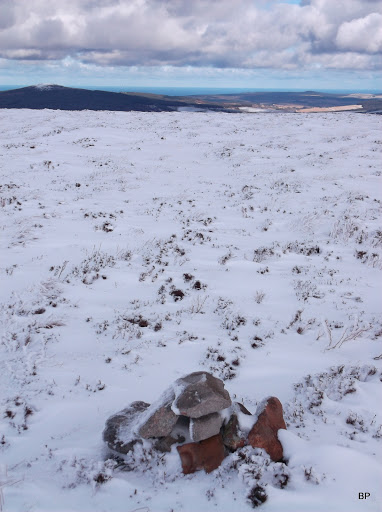 Kevin was the first to reach the mini-cairn. Our 14th Sub'2000 Marylin, not a big number but honestly, we never gave much attention to the lower hills, concentrating on M's... C's... and G's 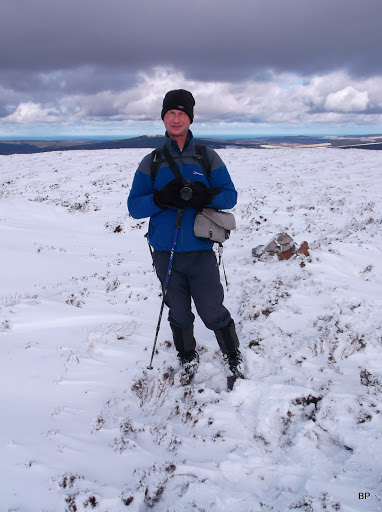 Wind picked up and the summit was pretty cold, so we didn't linger for too long, just long enough to record/photograph the last accords of passing winter.
Meikle Conval from Meikle Pap:

Zoom to another hill good for winter, The Buck (of Cabrach): 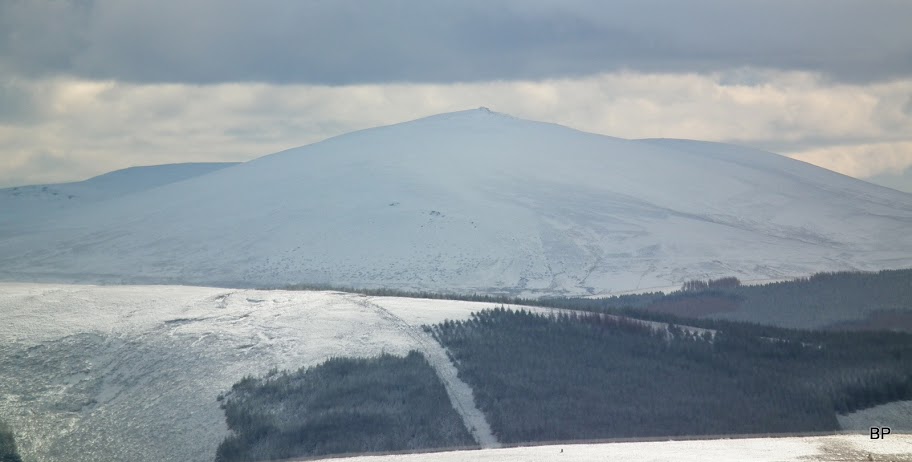 Quite a bit of snow to wade through 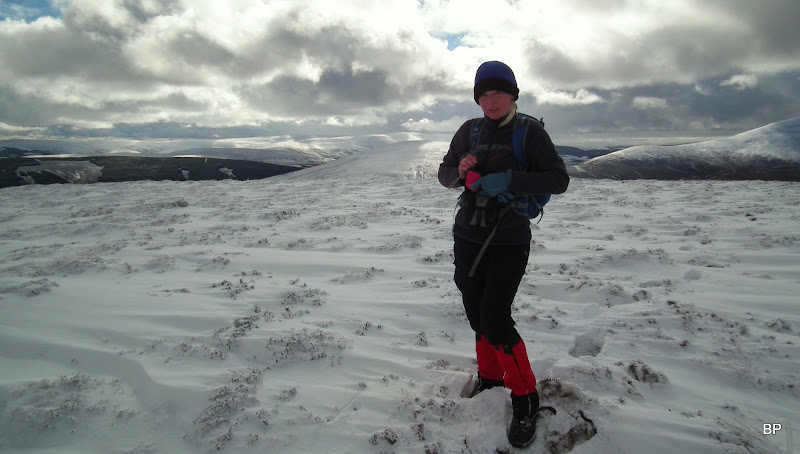 Meikle C and Coryhabbie behind: 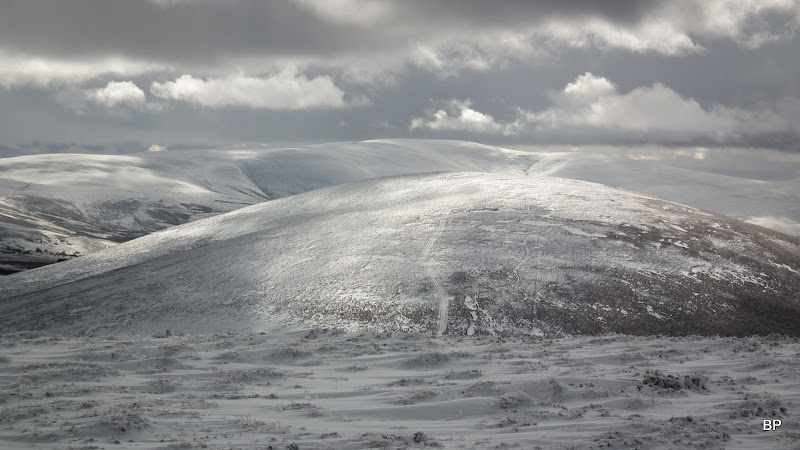 The game of shadows: 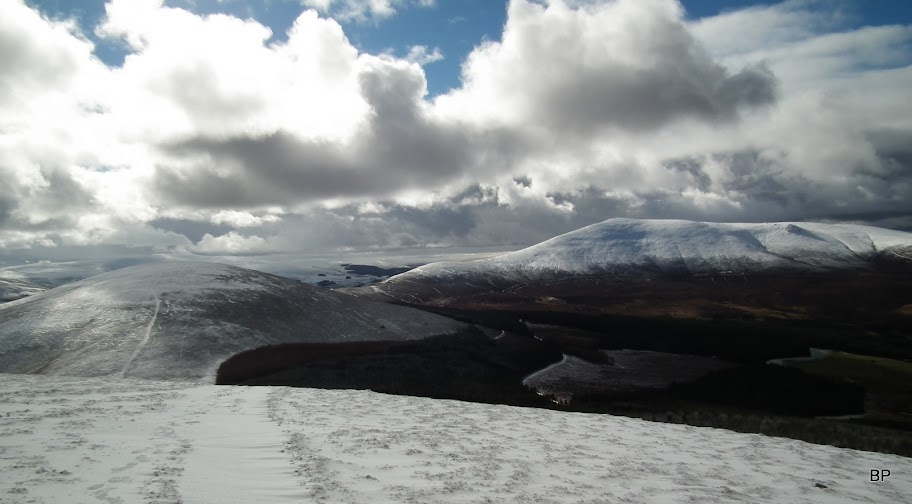 I was even more weary of the descent this time and yes, the knee was far from perfect, seems like it is going in the right direction though. I can manage easier hills now, and with every week passing it should get better.
We returned to the col and from there, we picked a track heading east, towards the tarmac road.
The track leading back to B9009:

The last 2km along the tarmac were the least enjoyable part of the circuit, but at least the road wasn't busy. Having returned to the car in less than 4 hours, we drank some hot tea and watched a pheasant picking bits of gravel just in front of us

One could say, two lumps not worth a separate trip. Maybe so, but we really enjoyed them and I couldn't have risked anything higher at that moment in time. It's a matter of patience now - a little bit more every time.

Good to see you two well enough to be out and about even on small hills - that has been some battering you have taken!

Thanks for drawing attention to these two which might come in handy when we want something easy to do in the east. It's good to see you're on the mend!

you'll be back on the big hills in no time! .....the subs are hardcore! .....I've found some of the smaller hills are tough! ...steeper and wild pathless terrain!

Great to see you two back at it BP, all I can say is Ooh-aah a little bit more