When the forecast is for 45mph northerlies and a windchill of -8C you prepare for the worst. That's why I packed the film camera for this trip too, thinking a cold damp day might not play well with the digi.

I'd been planning to hit the western Beacons for a while having explored most of the are to the east and in between. I had a few Hewitts I want to explore and so I planned out a good route along the high northern ridges to take in Fan Hir, Fan Brychieniog and Picws Du, with an extension if the conditions were good enough to cross the valley to the west of Picws Du to climb Garreg Las.

There had been a good dump of snow from around 500m and upwards and there was a lot of fresh powder higher up and over the tops. An early start from Bristol saw us hitting the route by 10.30 and only a couple of people had broken the snow before us (and a dog). 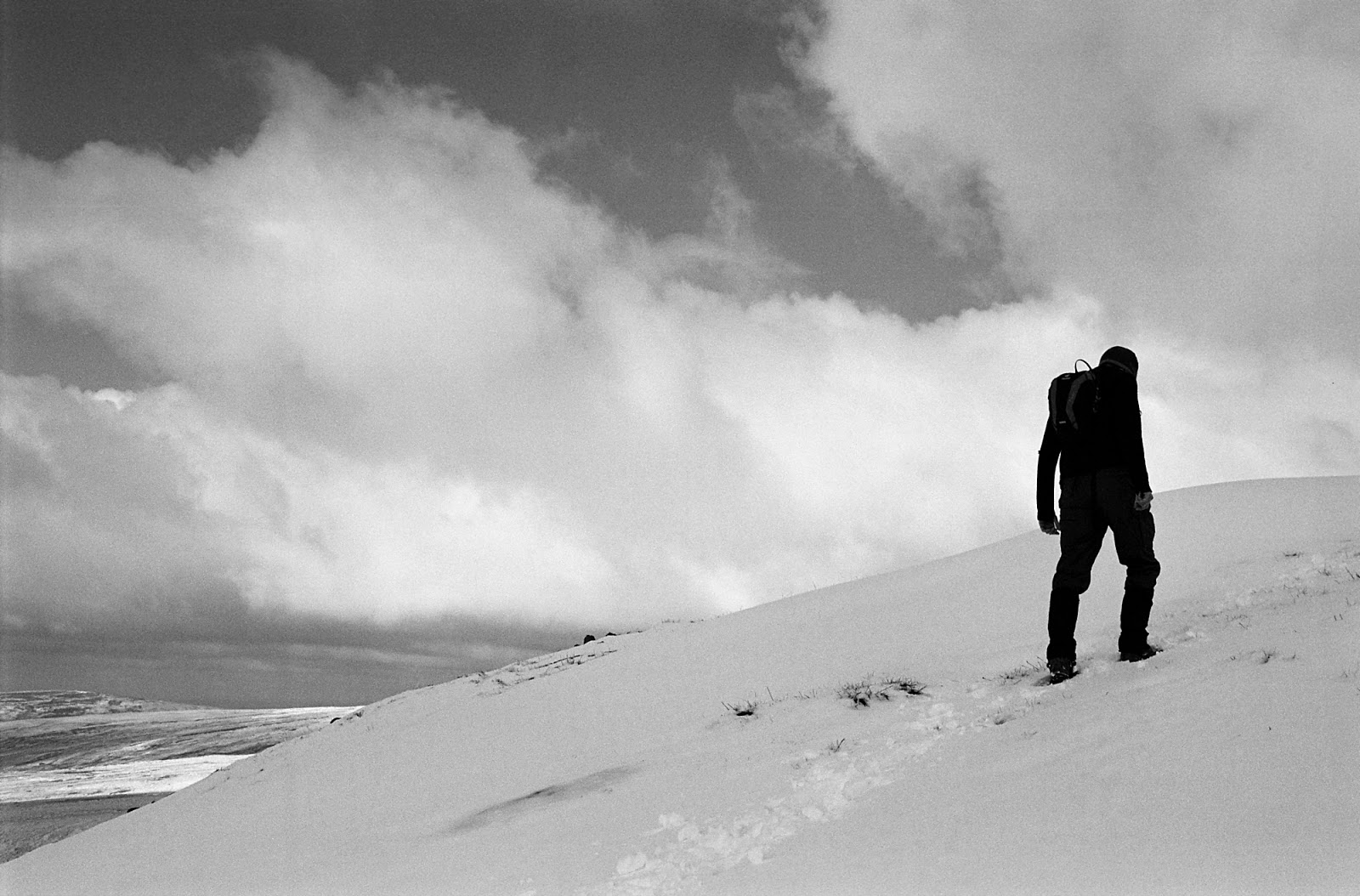 Higher up we came across a lot of very unhappy looking soldiers out training with full bergens and weaponry. I thought I was carrying too much gear until I saw them!

Amazingly the conditions were way better than forecast. The wind was a bit gusty but never very strong. The snow conditions were amazing, requiring a bit of kicking in on the steep bits but the ground remained unfrozen.

The ridge up to Fan Hir was a long, beautiful walk. The cloud stayed a few hundred metres over the peaks the whole day, and we could see clear to Pen y Fan and Corn Du in the east, Swansea Bay to the south and the Cambrian mountains glowing white to the north. 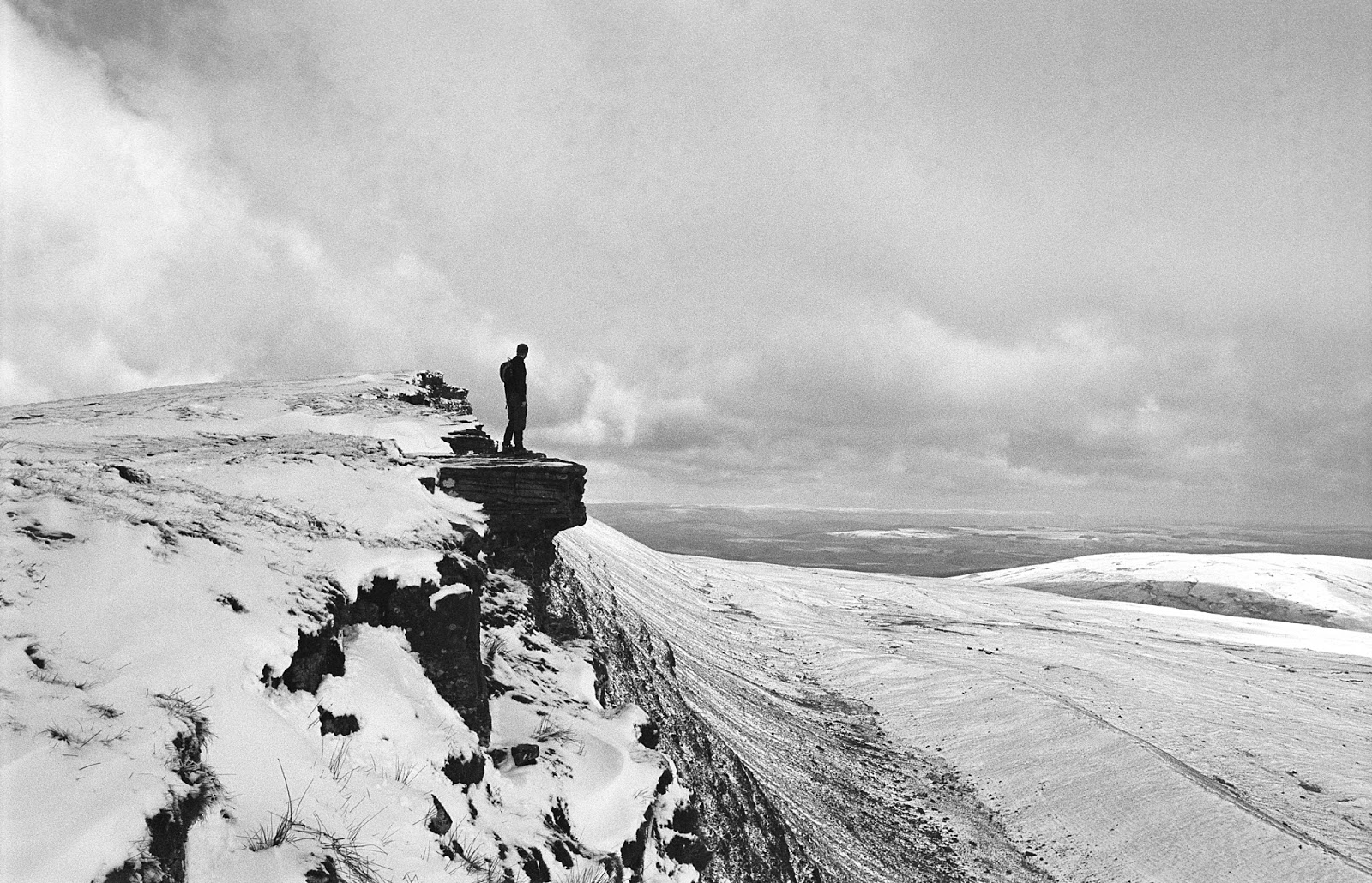 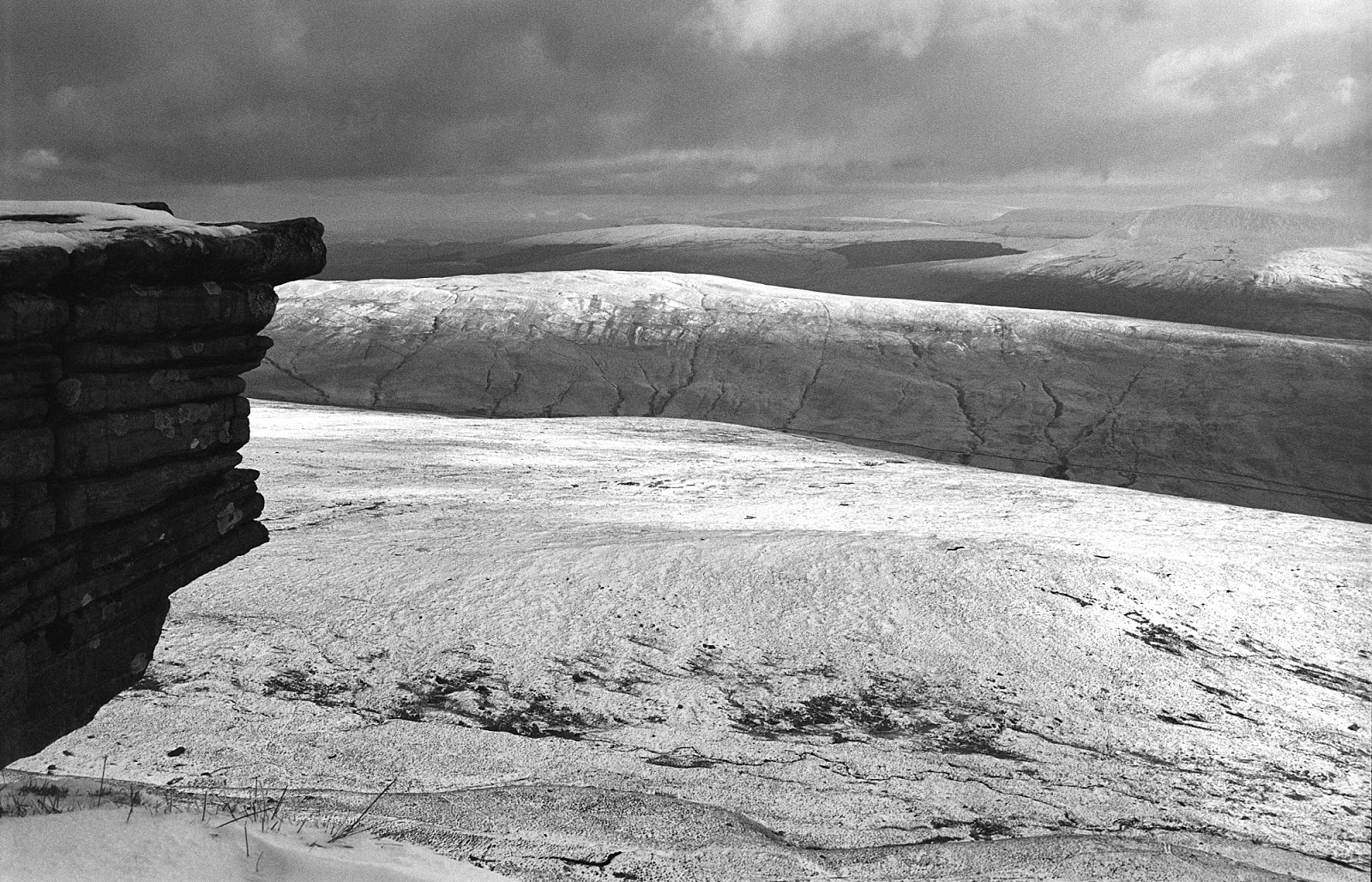 Dropping down from Picws Du we walked to Waun Lefrith then headed due west across the valley from the sandstone hills to the rugged jumble of limestone that marks the summit of Carreg Yr Orog (not a mountain but a cool hill). 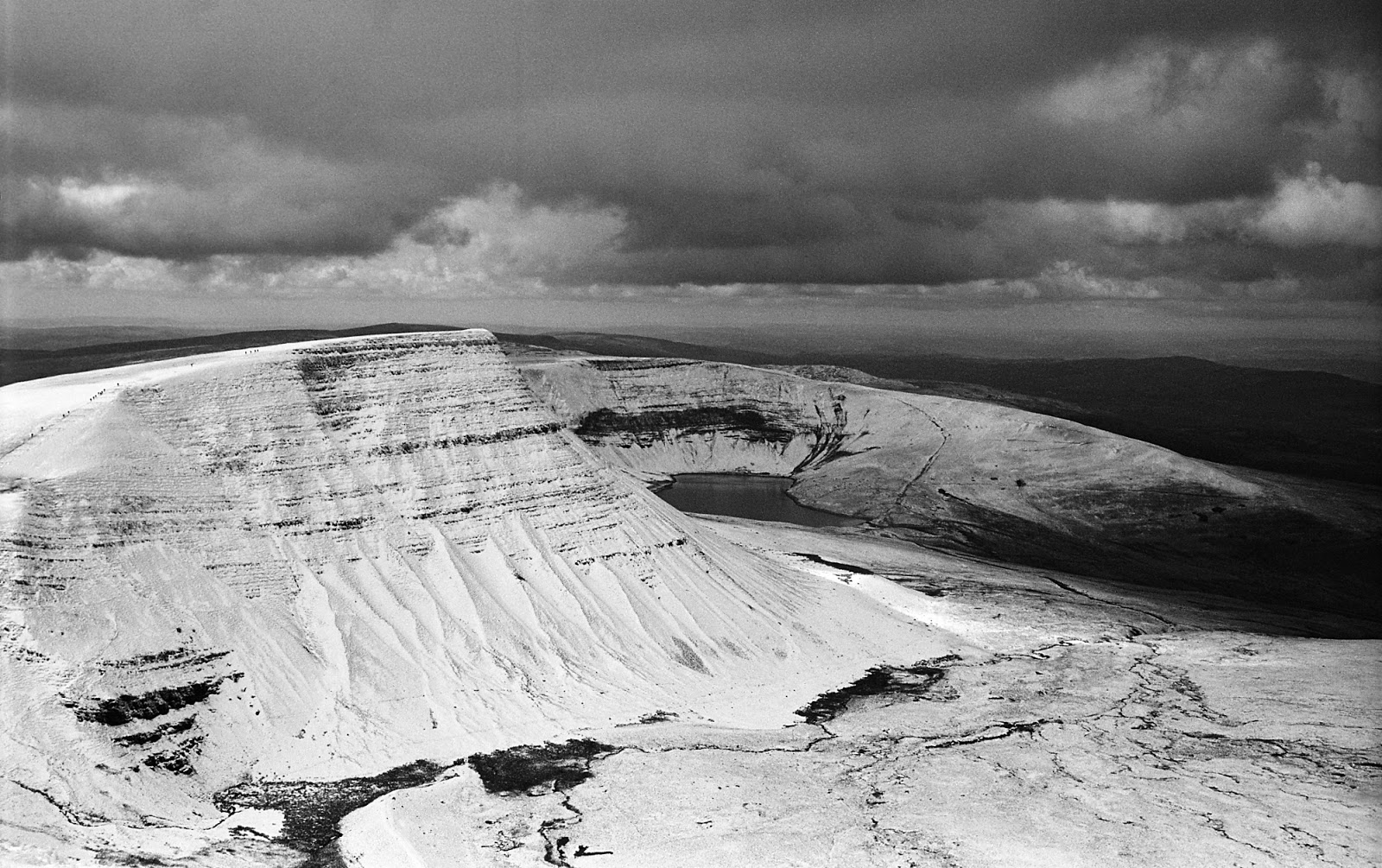 I'd read that you can access some interesting limestone caves from the sides of this hill, but whatever entrances there may be were too well hidden in the snow to locate. 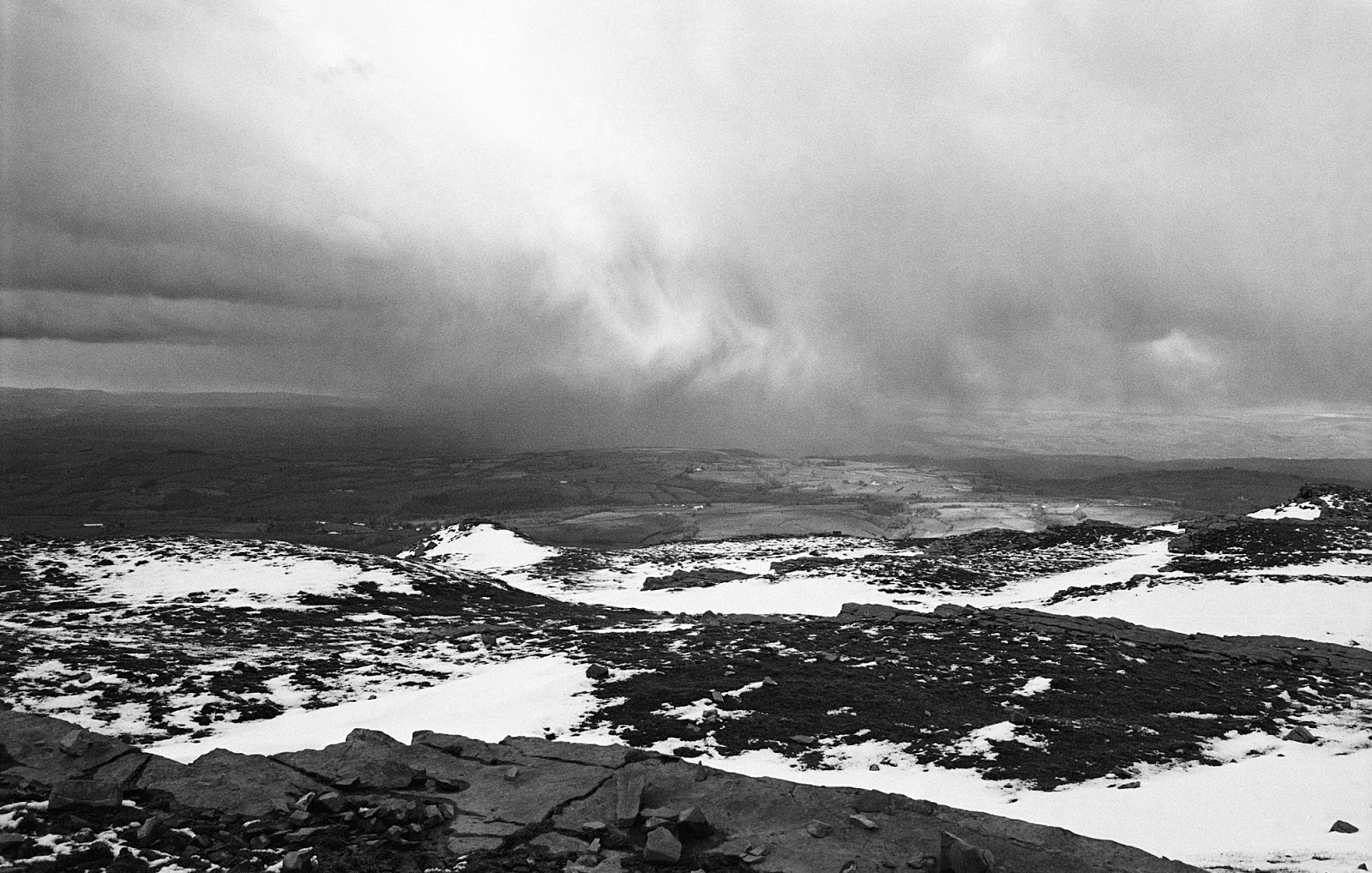 As a flurry of sleet and hail rolled in from the north we met the only two other people out in this part of the Beacons - two guy from west Wales who had just cross Garreg Las where we were headed, so we followed their boot prints all the way to the rocky summit; far more reminiscent of a Snowdonian peak than a Beacons one with is steep boulder-strewn edges and huge round shelters on top that reminded me of the summit of Elidr Fawr far to the north. 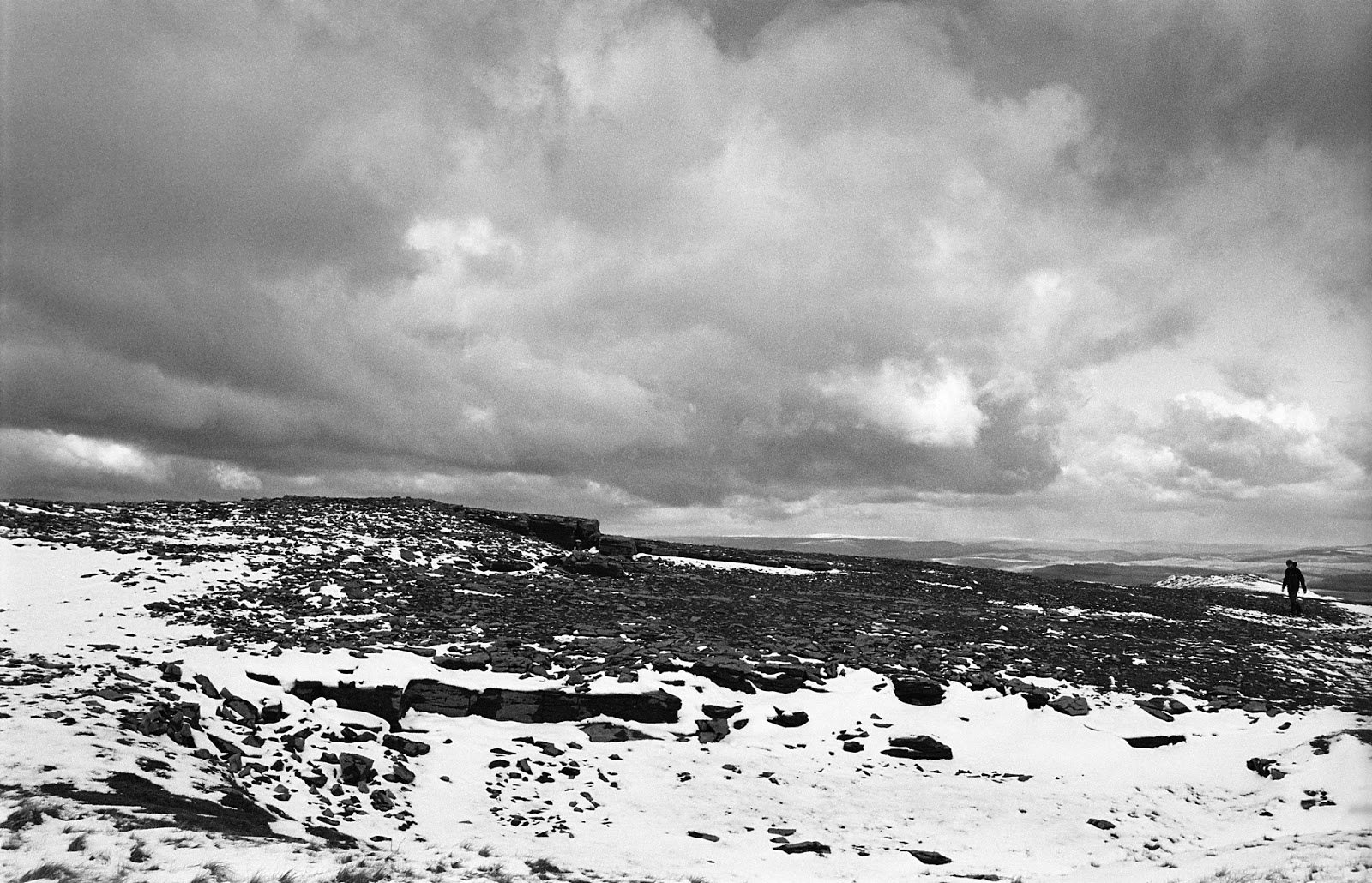 Garreg Las was our last peak of the day - from there it was a long and boggy slog across the valley crossing some beautiful scenery in the most isolated parts of the Black Mountain region and fording some rivers along the way before reaching the Dan yr Ogof caves car park and back up to Tafarn-y-Garreg for a well-earned coffee.

I'd originally envisioned walking back the way we'd come, but a local we'd met early in the day had suggested the cross country return route making it more of a circuit. I'd considered this when planning the day originally thinking it looked logical, but also thinking it looked boggy. I wish I'd listened to my instincts instead of the local knowledge. As pretty as it was, it was just incredibly wet! I'd fully recommend taking the higher ground back out if you're going to try this walk.

In the conditions we had though, this is some of the finest and most varied walking I've come across in the Brecon Beacons. I'll definitely be returning and maybe checking out the wild camping options around the lakes and trying to find those limestone caves!

That pub is lush by the way - really welcoming, good coffee and a wood burner ready to warm you up.

Really nice photos. Good choice and good use of B&W in them. Great capture of the "storm" in the forelast picture.

Thanks Jacob! Every now and then I need some added inspiration and so I crack out the film SLR camera.

Great stuff DX, not sure the digital camera would have had any trouble in those conditions...I think you were just looking for an excuse to go analogue

Lovely shots of what looks like a nice walk....if you don't take the wet short cut at the end

ChrisW wrote:Great stuff DX, not sure the digital camera would have had any trouble in those conditions...I think you were just looking for an excuse to go analogue

Lovely shots of what looks like a nice walk....if you don't take the wet short cut at the end

It's true! I did just want the excuse! Glad I did though.