A Song of Ice and Rocks: Glaramara

A Song of Ice and Rocks: Glaramara A reference to one of my favourite books/TV shows in the title for this one! The conditions and terrain seemed like a good location for shooting series 7 perhaps. Possible sightings of white walkers aside, I myself was not so much the 'king o'the north' as a somewhat frightened little English Alpinist. Glaramara is one serious place in cloud and snow. From the upper half of Rosthwaite Fell onwards it was a complete whiteout for the rugged ridge trek to Esk Hawse. I'm not even sure whether I hit Rosthwaite summit, but I'm giving myself this one! Following the compass heading I must surely have crossed it as near as damnit, [edit 25.Sept.2021 No, I didn't, nowhere near!] and I wouldn't have reached Glaramara if I hadn't. It's the same mountain in effect. The 'Tarn at Leaves', an expected early landmark, I somehow missed, but I passed over some rocky outcrop with a sizeable cairn which I'd bet good money was Rosthwaite Cam [edit: it was Combe Head].

Glaramara summit was beyond doubt, with its twin cairns a few metres apart and craggy surroundings half-glimpsed in the frigid haze. Heaven knows what angle I approached it from, and I had a very hazardous climb up a steep snow-ice face to get onto it, barely able to dig my toes in for grip to avoid a 30-foot fall. I should have had crampons on for that, and had an ice axe too. It got a bit more straight-forward en route to Allen Crags, but still some 'tricky' descents. I fell headlong one time, fortunately plunging only into snow. The good old-fashioned compass did it's job magnificently. Reaching the famous shelter at Esk Hause was a major relief (literally a relief for some, judging by some yellow stains in the snow). At that point I met the first humans (definitely not white walkers) since a young couple on the early ascent of Rosthwaite.

After a minor hitch finding the path down to Sprinkling Tarn, things certainly did get easier, and dare I say enjoyable. Seathwaite Fell was a picture of winter beauty, stunning views of the larger fells all around and bright blue waters. Well down on the descent, a lapse of concentration sent me turning over on my ankle, very nearly doing damage. I must be careful now, so close to my goal. Only 8 more walks to do to complete the Wainwrights in Winter. Once again, I reached the bus stop (this time Seatoller) with 15 minutes to spare! I should have had loads of time, but the ice and rocks of Glaramara could easily have cost me much more than a missed bus. The tiny hamlet of Seatoller, where the bus terminated. Felt very much like the territory 'beyond the wall'. Somewhere on Rosthwaite Fell, or between it and Glaramara. I'll never be sure whether I encountered it or not. Definitely 'something' of significance, and definitely before Gllaramara. Combe Head? 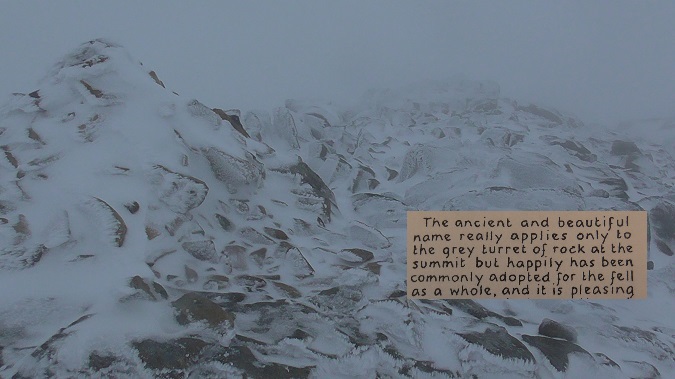 On top of Glaramara. Pretty sure. Glaramara's other summit, the south one. Must be. Damn, I was pleased to see the shelter at Esk Hause. Other walkers around now. Descent from Esk Hause. Emerging back into the world. 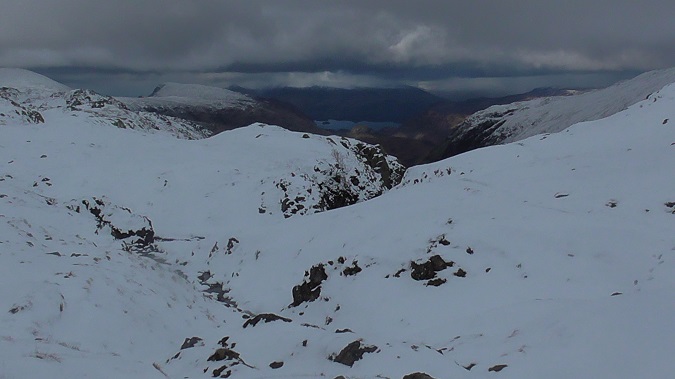 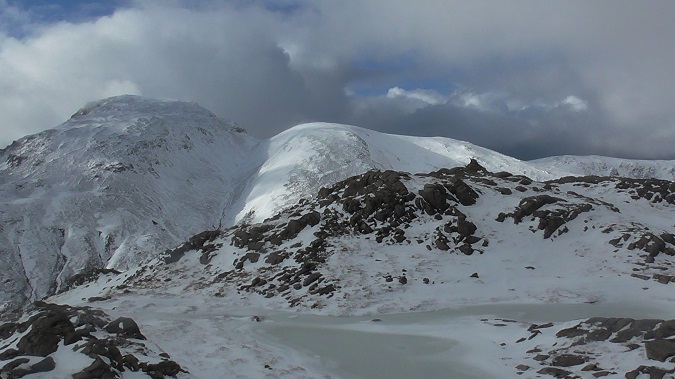 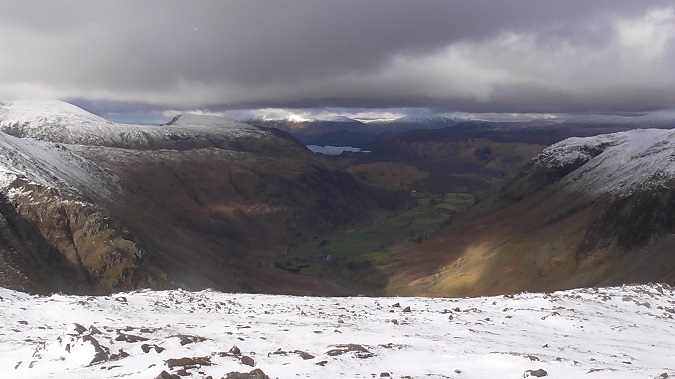 Bird's eye view of Seathwaite and Glaramara from Great End, 11 days ago. Any which way down Seathwaite Fell. 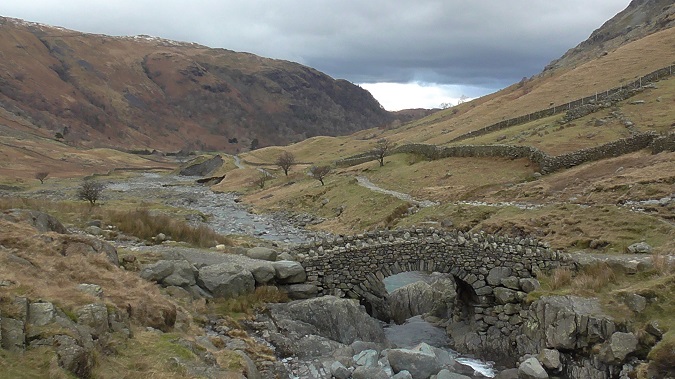 
our_route.gpx Open full screen  NB: Walkhighlands is not responsible for the accuracy of gpx files in users posts
Footnote: 25.Sept.2021. The summit I was hoping in vain was Rosthwaite was in fact Combe head, a subsidiary of Glaramara and a Hewiitt in its own right. This I have only just discovered, after looking into my progress on doing all the English Hewitts. It seems years later I have a nice little bonus from my route-finding troubles of that day! Also, Glaramara's South Top is a Hewitt in its own right, and happily I also summited that on this walk, of that I am certain. If only I had found my intended route, up via Rosthwaite, I would also have bagged 'Dovenest Crag' on the way to Glaramara, but alas this has to remain unticked. Furthermore, I feel far too much uncertainty as to whether I passed over the true (as in Hewitt) summit of Seathwaite Fell, so this must also remain unticked. I should have done more research on this shenanigan. Oh well, I have excuses for a nostalgic revisiting of this walk one day.

Lovely closing shots TEA, almost the exact opposite of the opening whiteout

Be careful out there man, it's incredible how a little turn of the ankle can finish you off for weeks (just ask my mrs

That's some of the most complex and confusing terrain in the Lakes - a real navigational challenge in those conditions! You did well to persevere with it.

As Chris says, take care; it'd be a real shame to scupper your mission with a twisted ankle, or worse, after all you've achieved so far.

Thanks guys. It was a real lapse, trying to save time in the race for the bus. I was taking my coat off off and trying to stuff it in my rucksack without stopping! Failed to watch my footing.