I had monitored the weather closely prior to our setting out and there was much wishful thinkin, that the BBC, Accuweather, and the Mountain Forecast may had been getting it wrong. For your information Accuweather were just about bang on, advising that the rain would start at around 11.00pm and it did.

This was the first outing of the crew that had experienced getting lost in Glen Affric, namely, Me , Linda, Kay and John, back on January 25th 2010, so there may have been some unspoken, unfinished business to attend to. 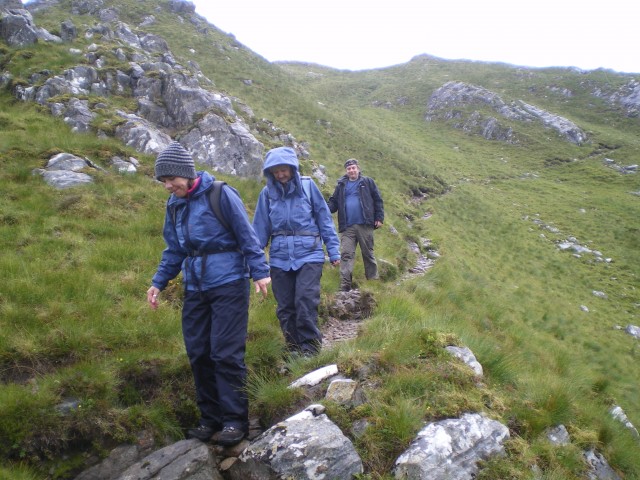 I had informed all that I had scaled the beautiful Forcan Ridge and Saddle back in 2004, whereupon, as a result of a Sunday morning domestic, I escaped to Kintail and headed up a hill, which I thought was The Saddle.
It was a glorious cloud free summer day and in my tantrum, I had taken no provisions, water, sun block, midgie repellent or anything else complimentary to such an outing. I did have on the proper footwear though!

Critical dehydration kicked in about half way up and I detoured way off track to a stream seen in the distance and thereby replenished myself. It all seems a bit hazy now, but I was convinced that I completed the ascent on that day. At this point my free advice to all is never go up a mountain on a hot hot summer day without food and especially without water. Good advice indeed. Anyway as implied above, yesterday, I was not so sure that I had scaled the Forcan Ridge or had rode on that damn Saddle after all. I said nothing to the team, after all I was lead man.
We were quite quickly high up, as is the nature of the steeply rising path. Tremendous views of the imposing Five Sisters of Kintail were still available, given that the mist was moving in fast. No other walkers shared the track, except one Cambridge toff who was quick to assert that he 'certainly was not' from around these parts, which was obvious from the family size Rainmate he was wearing.
The rain eased a bit and there was heat in the air. A sense of Deja Vu came over me and that's not the first time that has happened.
On our our first water stop I discovered I had not brought my water. I felt like a rubbish leadman, but was quickly reassured that that was not the case.
Chinks of sunlight through the engulfing cloud were but mere tricks of Mother Nature and her five intense Daughters of the Sisterhood. Eventually we reached the base of the Forcan Ridge ( I must relate a funny thing, throughout the walk, I kept referring to the Forcan Ridge in such a manner, that it sounded as if I was saying the F******* Ridge. I did this at every opportunity and Linda, Kay, and John were in stiches of laughter, so much so, that there was a Health and Safety Risk due to such hysterical merrymaking, and this is when I got my streetcred back as leadman. I knew I had to be cruel to be kind, and stopped using that hilarious play on words. More free advice, try not to get into hysterical laughter on the ****' Ridge)

We stopped at the base of the ridge, the rain poured and we were at ease in those wild wild hills. The Ridge was out of sight and The saddle horn peeped through the wet at us.

We discussed the fillings of our sandwiches, and then contemplated our futures.

We decided that the beautiful but mist hidden Forcan Ridge, for this day, would have no dancers, and the Saddle would be unmounted, until it was safer to do so.
We came back down, happy, and wiser people. Nice report chaserjay, thanks for posting


Pssst, there's a road sign Loch Lomond way which always raises a few giggles when you comment, 'What's the Firkin Point of that?!'

magicdin wrote:daft road signs - a few years ago on a sunday (April 1st) - driving through ONICH - someone had sneaked out in the night and changed the road signs to read "ONION"

magicdin wrote:daft road signs - a few years ago on a sunday (April 1st) - driving through ONICH - someone had sneaked out in the night and changed the road signs to read "ONION"