I hadn’t actually realised that there were 4 other Munros to bag from Lochnagar, unfortunately my brother Darren and I had been and bagged Lochnagar the previous week! Visibility was really poor that week so we said if it was clear this time then we would go and take in the view since we had to basically climb it again anyway to get round to the other 4. It was not to be though, the day started off wet and very cloudy with visibility worse than before! We set off from the car park bang on 9am through a fine mist of rain. Stopped at Loch Nagar for a bite to eat before heading up the ladder to take us over the top of the loch. I hadn’t realised just how close to the summit of Lochnagar we had to go before cutting off to the west to take us toward our first Munro of the day, Carn a'Choire Bhoidheach. This is a pretty featureless Munro with a little, quiet cairn at the summit. The clouds had really started shifting on our ascent and now from the top we could see the clear, sun soaked summit of Lochnagar! No way were going over there again though, no matter how good the view was going to be

We took a bit of shelter from the wind at the rocks just down from the summit and had wee rest and another bite to eat as I looked over the route of the rest of our journey. As the grey clouds had cleared we could quite easily see where we were now headed, on to Carn an t Sagairt Mor. The path kind of disappeared after the 2nd crossing of the stream so we just cut straight up as it was not too steep an ascent. We were greeted on its vast top with some amazing views to the north, even picking out magnificent slopes Ben Rinnes, who's doorstep we basically live on! Cairn Bannoch wasn’t too hard a walk to reach and Munro number 3 of the day was bagged in no time. We could see our final Munro, Broad Cairn and wasted no time in moving toward it. For a while it never seemed to get any closer, our legs were tired now but we were almost there, 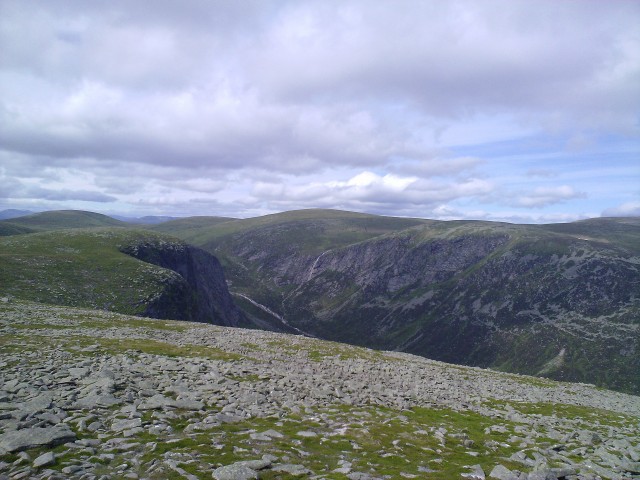 we clamoured up the increasingly rocky final ascent and made it, 4 Munros in a day which took our total up to 6, both shattered but extremely pleased with ourselves. Broad Cairn provided us with some brilliant views but one which really took the wind out our sails! for we could see how far we had to walk to get back to the car! In all it took 8hrs 40 mins, we were both very weary but really happy about the day overall and thankful that the weather came good. looking down over Loch Muick

Re: The White Mounth Munros

Still have Broad Cairn to do - am going to do from Loch Muick via the Dubh Loch and it's top - partly as I'm trying to bag tops as well and partly 'cos I want to walk up by the Dubh Loch as it looks a great route...