As I was just leaving the car, a man ran over and asked me if there was a good path all the way up Fionn Bheinn. I pointed out to him that as I last climbed the hill in 1991, my memory was not too clear about the route. He asked if he could wait while he fetched his phone to take a photograph of my printed map. I take it that this was his only map!

I was in fact in error when I said 1991. Looking in my book, it was in fact May 1989 with three Leeds University Union Youth Hostelling & Hiking Society friends, Simon, Steve and Dave. We had been enjoying superb weather, backpacking in the Ben Alder area before heading north to meet up with more friends and climbing An Teallach. I seem to remember Fionn Bheinn being the finale to a splendid week.

We had headed up through the plantation as in the route shown above. I remembered the plantation part as being particularly pleasant. Walking along the road, I passed a sign stating that for the route for Fionn Bheinn, I should head west across the bridge and head up the track. I stuck with plan A despite the signs trying to put me off! 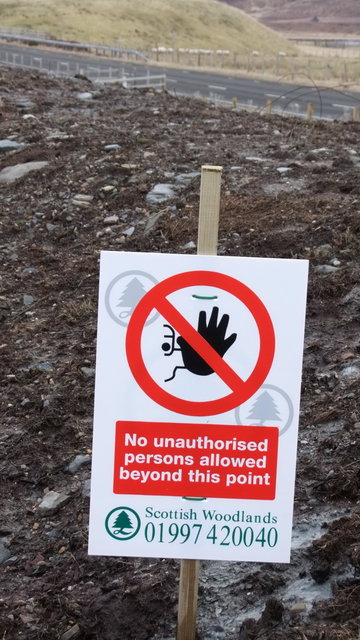 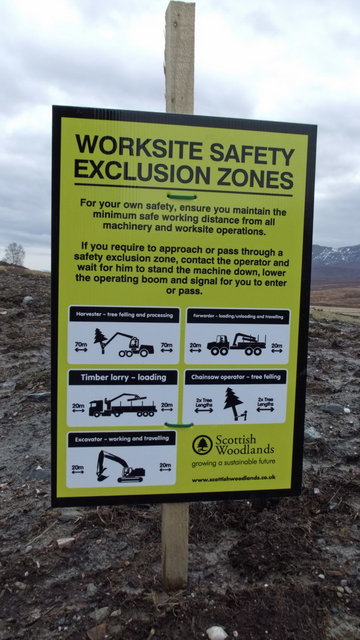 I could see an older vegetated track but this has been replaced by a much uglier one. This winded its way up to the plantation at which point a muddy track headed straight up. I did not pick out the old diagonally rising path. It could be that this is now blocked, but that would be a shame as it continues as a fine stalkers path that takes one all the way up to the wall on Sail an Tuim Bhain. The track brought me out a good 200m west of where I wanted to be with a burn to cross. I used the fence to help me make it across with dry feet and without risking being washed away. 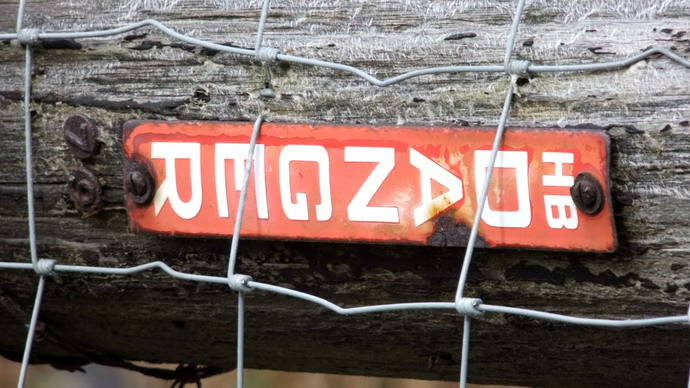 I was slightly amused by the danger sign halfway across. This no doubt applied to the previous use of the pole.

I followed the fence until reaching the gate and the stalker's path. I looked back down the path and there were a couple of fallen trees blocking it. I am interested to know how passable the rest of the path is. The next section was very easy going. A pleasant gradient and firm underfoot. Once past the plantation, this is probably the most pleasant way up the hill. I turned to look back down the path and beyond to the Moruisg range of hills. The eastern end of these hills has no Munros, Corbetts or Grahams but has some fine looking northern coireachan. It looks like an area well worth exploring even without there being anything to tick off! 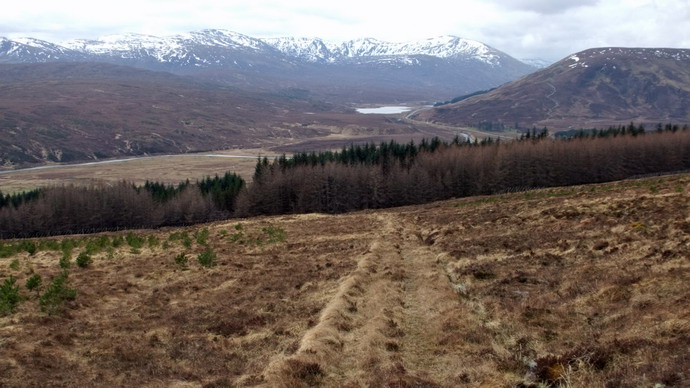 I considered following the stalker's path beyond the wall as possibly the easiest way of gaining height but on arrival, headed up left along the east side of the wall. There are breaks in the wall and I was interested to find water running out of the end of a section of wall and as I continued, I could hear the water running beneath the wall as though it acts as some sort of aquaduct. 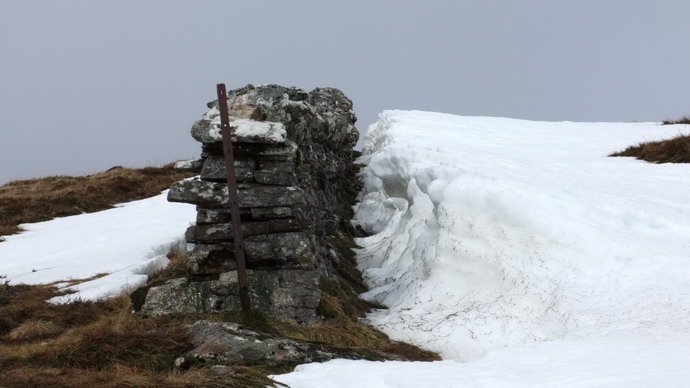 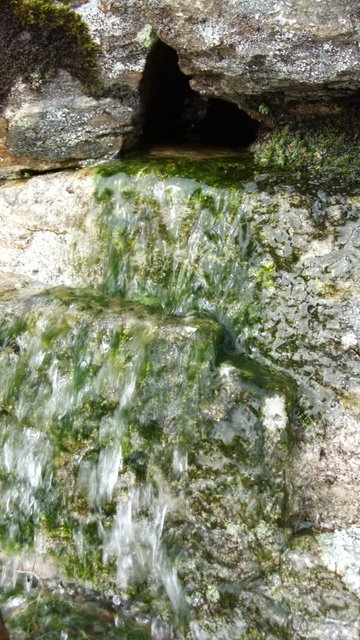 The ascent of by this route gives views to the north before reaching the summit and the mile walk from the end of the wall is a true delight.

There was still a fair amount of cloud on Ben Wyvis (seen left of the photograph below) and this continued to be the case until reaching Meall a' Chaorainn. Sgurr a' Choire-rainnich, to the right of the panorama, always looks interesting from the A832 when travelling west. I have climbed its parent Corbett, the less impressive looking Sgurr a' Mhuilin, but not the more interesting satellites of Sgurr a' Choire-rainnich and Sgurr a' Ghlas Leathaid. As it is so close to home, perhaps I will add them to my to-do list, perhaps with a wild camp at the lochan at around 800m which sits on the edge of steep slopes to the north side.

While the Fannichs were largely clear of cloud, there was still a bit of cloud sitting on the top of Fionn Bheinn. However, the ridge to the east of the summit was bathed in sunshine and the cloud did lift enough to be able to briefly make out the summit trig point. 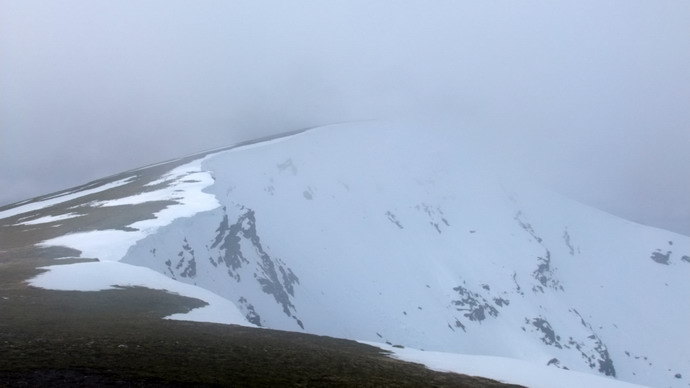 On arrival at the top, I used the trig point as a tripod for a selfie. I did seem to time my ascent well and while I obtained slight shelter just north of the summit (with my back to the bit of rock seen by my right elbow) and drank some warm, milky coffee, I enjoyed views of Lochan Fada and the Fisherfield Forest. 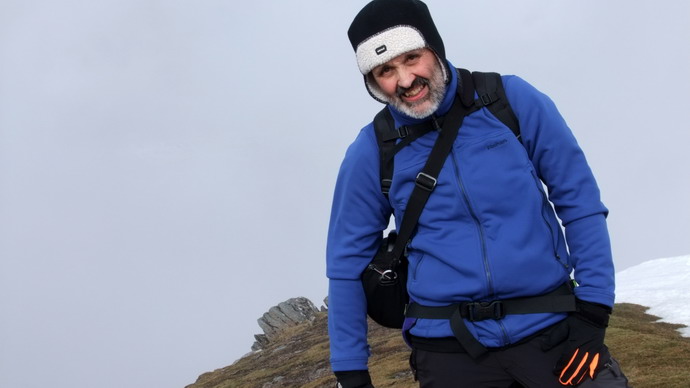 I had noticed a couple heading up to the summit since following the wall on Sail an Tuim Bhain and they arrived 5-10 minutes later. I asked them to take a summit photo of me with the Fannichs in the background. 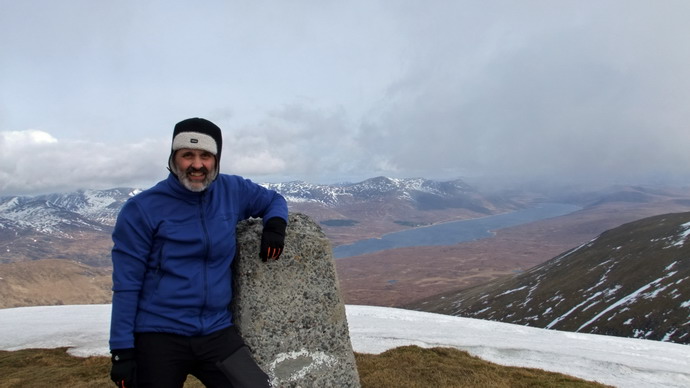 I headed down. The terrain lead to a quick descent. I tried to take a reasonably direct line for Meall a'Chaorainn but avoiding the steeper slopes. I again bumped into the couple from Elgin (or Nairn) who had stopped for some lunch. I picked out the most appealing line up the Graham. I decided to follow a strip clear of snow with a steep section of snow at the top between a slight cornice to the left and some avalanche debris to the right. I could have avoided the snow altogether if I had headed further right.

​My route took the long dark strip going diagonally left in the photograph below and kicking steps up through steep deep snow above. I would describe Meall a'Chaorainn as more of a hill than a mountain, but it gives particularly fine views, especially towards the Strathconan Forest to the east and Torridon to the west. Climbing mountains is about far more than the vies from the summit. I love to walk on the varied natural surfaces. Man-made surfaces are hard and relatively uniform. On the hill, every stride is unique. The flora is varied, providing different textures underfoot. One also sees lots of other little wonders such as water bubbling up from a spring.... 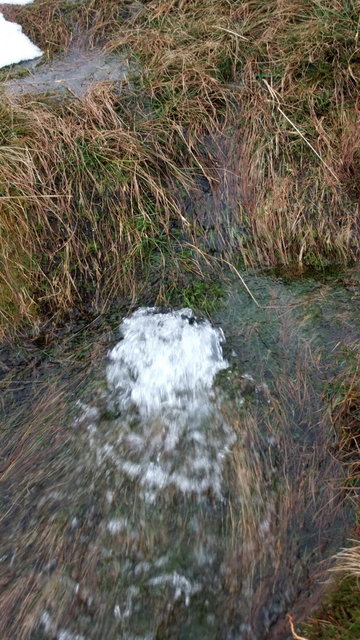 As much as I enjoy the textures underfoot, below was a large expanse of peat hag and I decided to try to follow slightly raised ground around the edge of it. This longer sweep around the edge avoided the worst of the bog and ultimately led me to a small dam with a shiny cable running above it. I could have followed the new track down to the south west of the Allt Achadhe na Sine but that did not appeal so I crossed the dam and headed down the old path down the side of the gorge.

I put my gloves on so that the wire would be less painful on my hands should I slip. The force of the water over the dam meant some effort was needed to place my feet on the dam. The current pushed me feet towards the edge, but once my feet made contact with the concrete, friction was sufficient to hold them in place. I was glad to have the wire though. The current would have knocked me off balance without it! It did add a little bit of extra fun to the walk! On arrival back at the road, a car stopped. It was the guy who had taken a photograph of my map at the start. I was pleased to see that the photograph was enough to see him up and down safely.

We briefly compared our routes but soon made our farewells after his partner pointed out that he was blocking the road.

Achnasheen looks very run down. The garage has been closed for some years and the silversmith/cafe has moved to Fortrose. The train station looks nice and there is a lovely little village pond with mallards.

Nice blog on this much maligned hill. Nice title, too!

You're right about climbing - it's always more than just the views. As I'm battling an injury at the moment and can't risk any difficult mountains, I came to appreciate the charms of Grahams and Subs. Of course, there is always a bit of disappointment inside, when I read other people's reports about big walks...

Speaking of textures, we were in Glen Strathconnon that very day and climbed a Graham, very wet underfoot, we invented a new term for boggy terrain - mushy tatties

Here is your hill seen from Beinn Mheadhoin - maybe you can spot yourself somewhere, plodding up the hillside

BP - Great to see the photo from Beinn Mheadhoin. I would not have recognised the hill, but I can make out the line of snow up the side of the wall up to Sail an Tuim Bhain. Was this quite early in the day? I decided not to rush out to the hill and even stopped for a burger (second breakfast) at Tarvie Services Snack Bar. The weather was slowly clearing as I headed up the hill arriving at the top at around 12:45. I assume that your photograph was taken a little earlier?

I checked the exact time my photo was taken - 11:23. By 12:45 we were already back in Inverchoran. We should have really done what you did, wait a bit and climb the hill in early afternoon, when the cloud cleared of the summits.

We haven't done Chaorainn yet, the day when we did Fionn, I was put off by extensive peat hags on the col between the two tops. Sure when we repeat this route, we will include the Graham