This week I returned to the Cowal Peninsula - an area I have not visited for a number of years.

The Western Ferries service from Gourock - Hunter's Quay gave me the opportunity to have a circular trip, taking the ferry over in the morning and returning by road at the end of the walk.

I arrived at the ferry terminal just as the Sound of Shuna was loading, so it was straight onto the boat and away. Unfortunately, my plan to spend the trip on deck was scuppered by the amount of smokers out there. Once across, it was a short drive to the B836 road and the start of the walk. Parking was fine at the old bridge, but even if this area was full, there are a number of lay bys on the road not far from the start.

It was pretty cloudy and cold at the start, but the forest tracks make for an easy walk in. Emerging from the forest

The path at the end of the forest is marked "Coffin Road" and the trees at this point have been felled, so it's easy to see the way up to the Bealach na Sreine. Lots of noisy ravens overhead! It's no real distance up to the bealach and once there the view over Bute to Arran and Kintyre is quite spectacular. 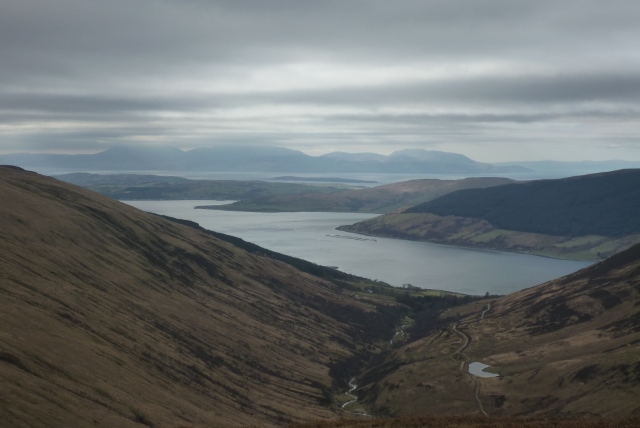 Bute and Arran from the bealach

It would be really hard to get lost on Creag Nan Capull as a fence goes all of the way along the crest of the ridge to the summit. There is also the vestige of a path which makes the going quite easy. Having said that, it's quite a trek out to the summit, over Green Knap and Leacann nan Gall. Rothesay Bay and Holy Island beyond

It looks like quite a steep pull up to the summit, so I stopped for something to eat before tackling it. As usual, once on the slope, it was nothing like as steep as it looked and I was on the summit in no time. Fortunately, this coincided with the brightest spell of the day. Looking west to the Mull hills The Firth of Clyde from the summit Due to the hill being at the bottom of the peninsula, there were a number of unusual views - for example, looking over Gourock and right up the Clyde towards Glasgow. The Tail o' the Bank and River Clyde

Excellent visibility today meant that I could see from Cruachan in the north to Jura in the south west, with the Campsies and Argyll hills in between. 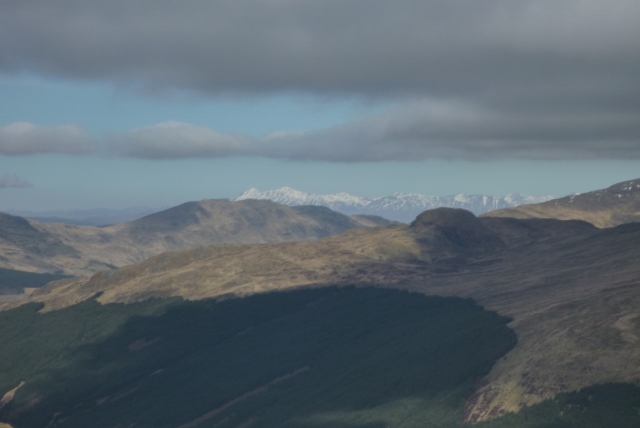 Cruachan from the top Looking down the Clyde from the summit cairn

I retraced my steps along the ridge to the bealach - I thought that this was easier than trying to contour round the bumps on the ridge. Once I started on the ascent of Black Craig I found a good sheltered spot on by the burn to eat my lunch. Looking back to the Graham from my lunch spot

The ridge was easy to gain, but I was glad of the recent dry conditions as the crest could be quite heavy going in wet conditions. The Tail o' the Bank from the Black Craig ridge

Just a small stone to mark the summit of Black Craig.

From there, it was back to the bealach and down to the forest track for an easy walk out. Arrived back at the car mid-afternoon.

The drive home along Loch Eck and Loch Fyne was spectacular!