I was at a bit of a loose end, and a day of reasonable weather was presenting itself. Had an idea of doing a local Graham or two, possibly cycling out from Inverness. Glen Strathfarrar and Loch Glass seemed like reasonable destinations, but instead I gave my mate Dave a ring to see if he had any plans. He quite fancied a couple of hills on the North side of Loch Arkaig. I hadn’t really worked out which way I was going to do these, so decided to go with him. We went from the North, as the starting point was a bit closer, and it looked more interesting.

Choinich.gpx Open full screen  NB: Walkhighlands is not responsible for the accuracy of gpx files in users posts

Glen Garry from the start of the route: 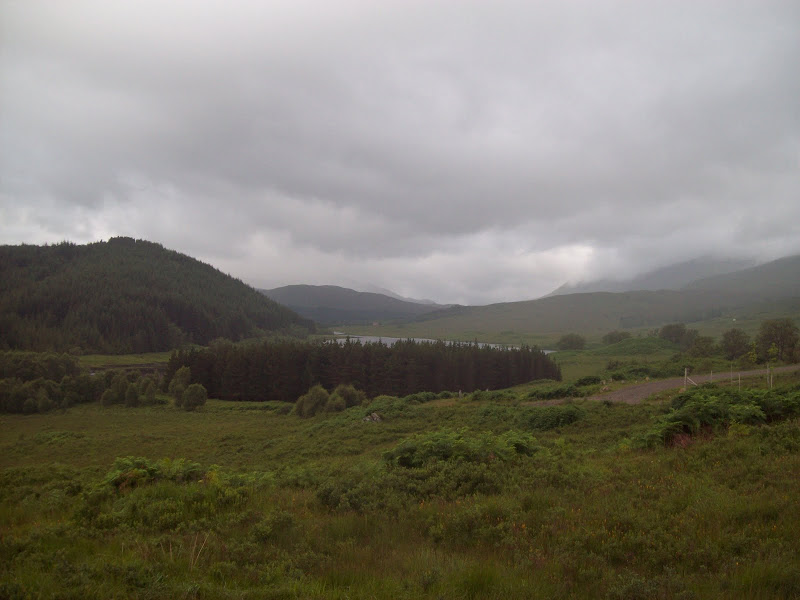 Bit of a gamble with the weather, as it wasn’t due to be so nice further west. Parked up in a small gravel pit near Poulary shortly before 9 in miserable drizzle, but within 5 minutes of leaving, the sun was making an effort. Some confusion in the forest meant we didn’t manage to find the stalker’s path into Coire a’ Bhalachain (spotted it on the way back though!), so we used the forestry track, cutting through to the edge of the forest just before Lochan an Staic. This was straightforward, and probably easier than using the stalker’s path in the forest. 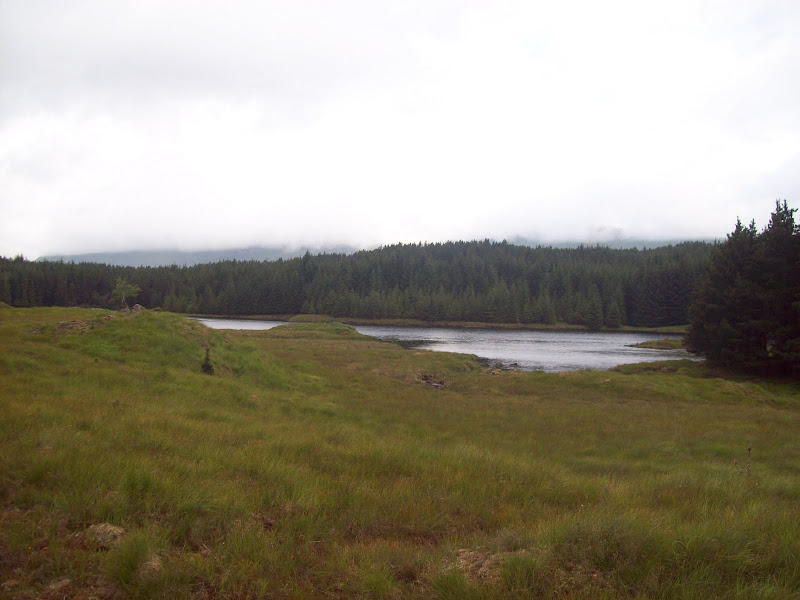 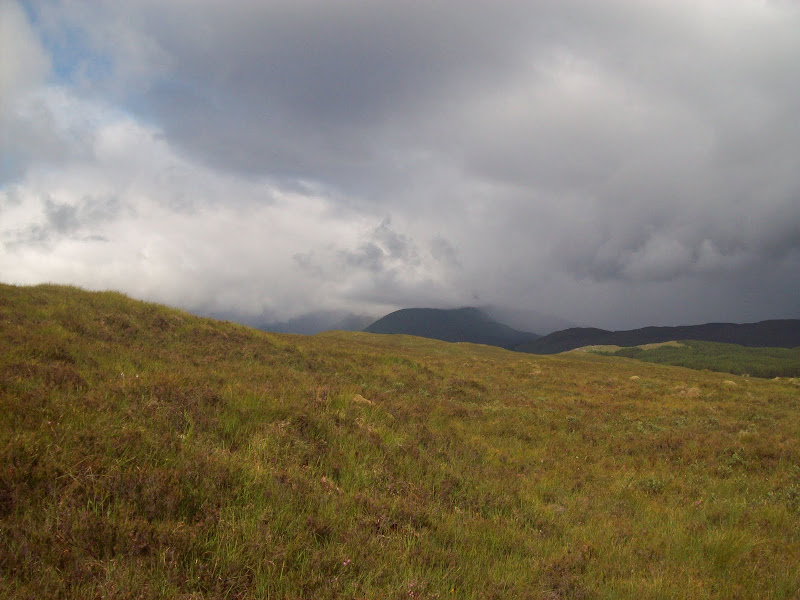 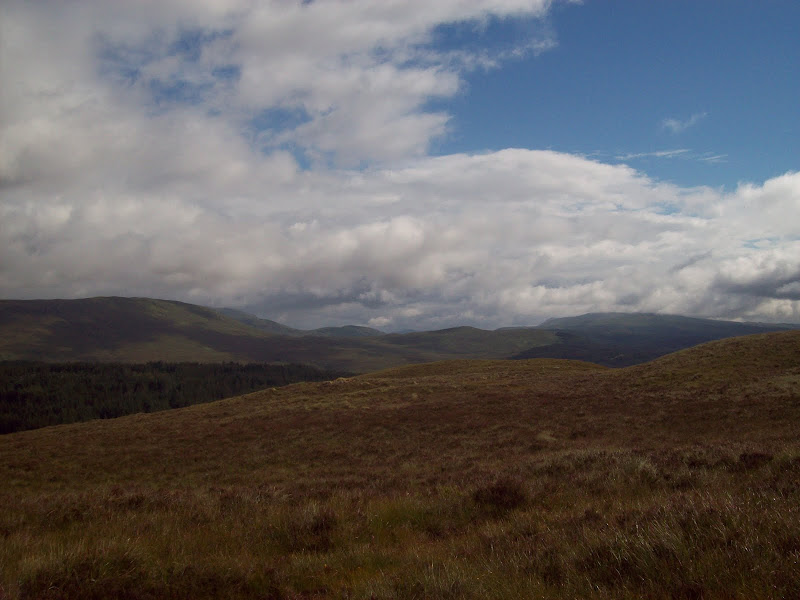 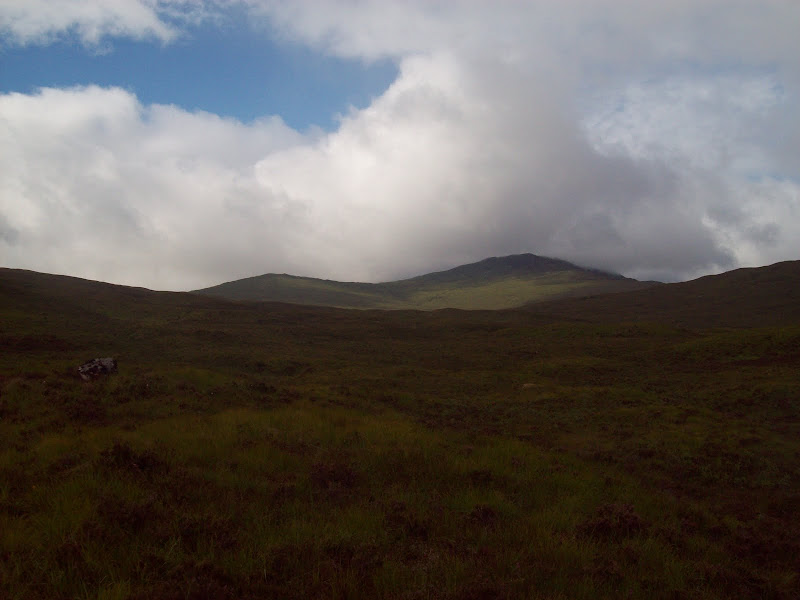 We crossed the corrie and picked up the stalkers path higher up. This was rarely used, and not greatly easier going than the surrounding moorland. Over the col between Glas Bheinn and Sgurr Choinich, and we were on the final ascent to the summit. We hit an old fenceline the plateau, and were soon on the top. Lots of cloud drifting about, but we did get some views, clearest looking back down Glen Garry. Bheinn Bhan and Loch Arkaig were also glimpsed briefly, as was our next target, Meall Blair. The mass of bog we had to cross to get there was also obvious! 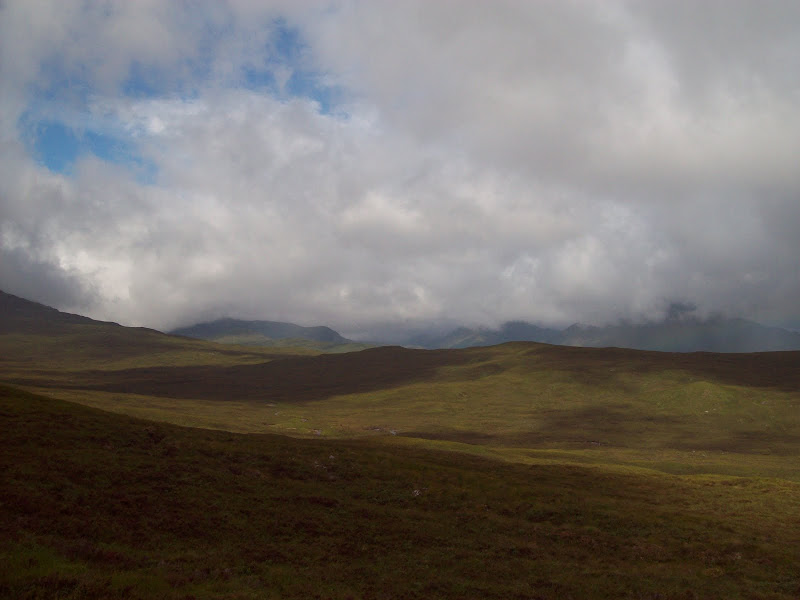 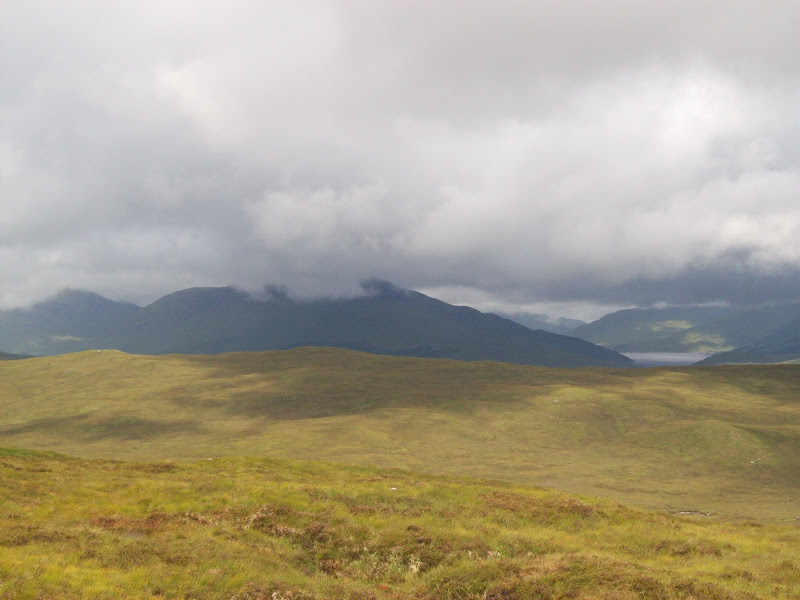 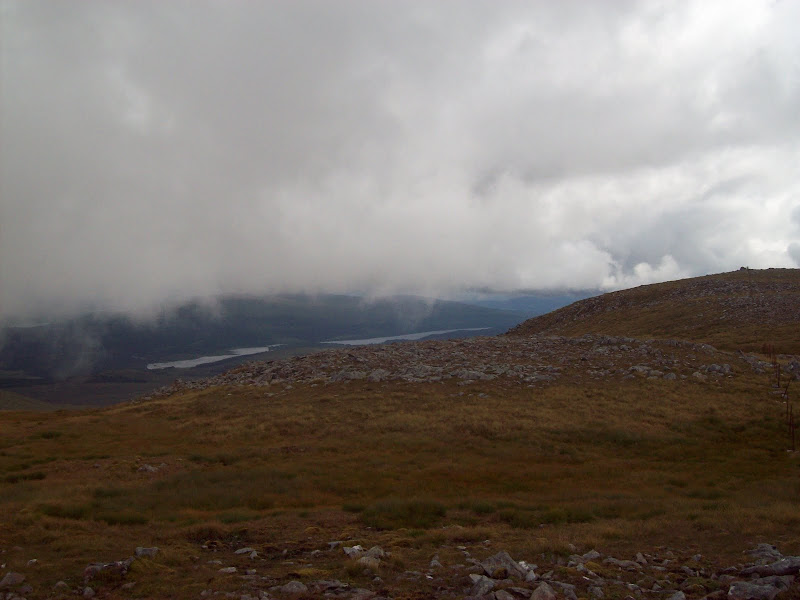 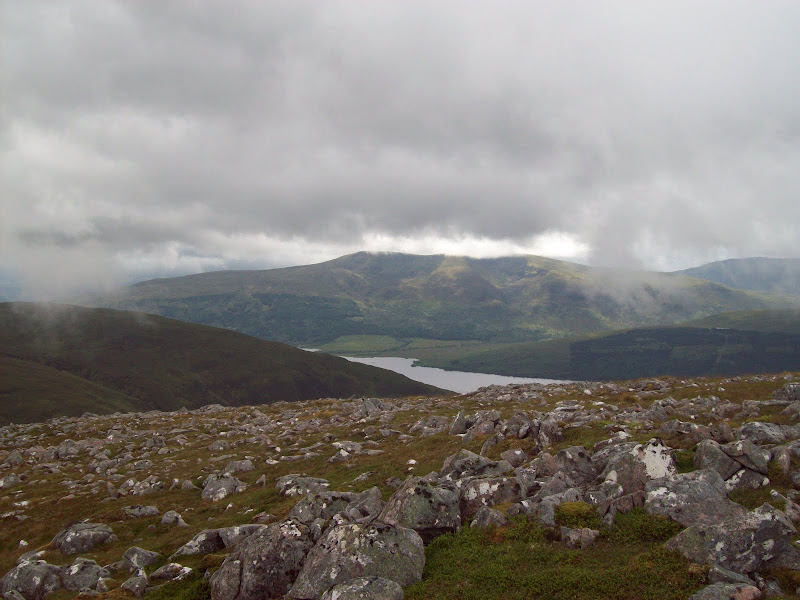 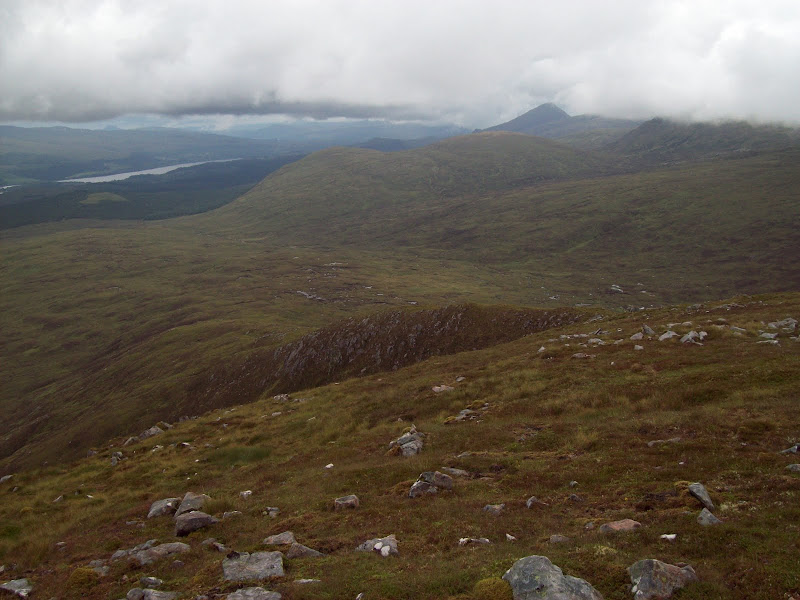 An easy descent, then it was down to picking our way across the col. It was possible to find a reasonably dry route over with a bit of thought, then we were heading up Meall Lochan nan Dubh Lochan. The drizzle and lower cloud had moved in on our traverse of the col, so we contoured this intermediate summit to the north. The final ascent to Meall Blair was enlivened by a line of slabs which could be walked up. At the trig point, we debated whether a more westerly cairn might be the highest point, so visited it anyway. We had limited views of Glen Kingie and the lower slopes of Gairich and Sgurr Mhurlagain - in clearer weather, this would be a brilliant viewpoint for the hills immediately east of Knoydart. 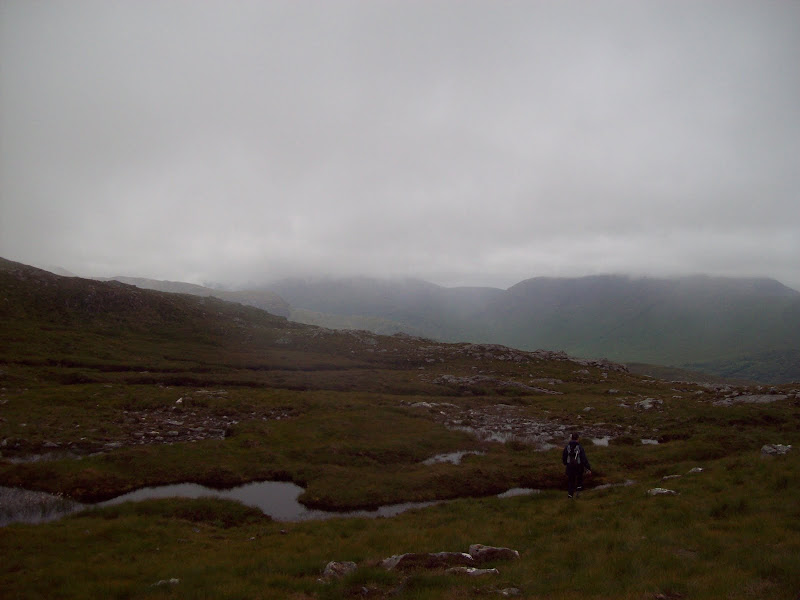 We cut across the face of the NE ridge of Meall Blair to avoid a couple of humps, but were soon back on the ridge, as this was the rockiest part of the whole walk, and not great for contouring. Lower down, this was a straightforward walk across grass and bog, traversing the excellently named Druim na Loobie Doobie (well that’s the way I’m spelling it from now on anyway!) back to the forest edge. From here we retraced our steps through the forest to the car.

All in all a reasonable day crossing some rarely visited terrain. I’d imagine that of the small number of people who climb these hills, most approach from Loch Arkaig. Weather wasn’t great, but better than expected in the west.

Nice report malky_c, looked like a fine walk too me

I know your fit and probably would do it, but are they not both about 20 miles away from Inverness!?

Been meaning to do a decent combined cycle/walk for ages now. 50 miles cycling + a shortish hill is certainly doable, but the more I think about it the less I can be bothered, hence me giving my mate a call to see what he was up to instead!

Cool, 50 miles is well beyond my idea of an adventure! Just making sure I wasn't missing a trick - I'm running out of ideas of stuff to do within walking/cycling distance of Inverness. Never say never though.... didn't find it too bad at the weekend on a 23 mile round trip mostly on the bike...maybe I'll up it another 10....then another 10....or maybe not!