I almost missed the path going up towards Beinn Narnain, as it doesn't look much like a path at the start. The beginning of my walk was alright until about quarter of the way up, then visibility just disappeared rapidly. I could see about three feet in front of me. I didn't realise there were as many summits to go over before you actually reach the top. I kept thinking " I will see the top over the next ridge". I remember that I thought I was close, only to walk a little further and see a big, dark shape appear in the mist, reaching skywards. "WTF"

. There was still quite a bit of snow around. Someone had climbed before me, and the snow had frozen around their deep footprints, so I was able to use them like steps.
As I reached the summit, the sky became clear, and the visibility was perfect I walked around the cairn, and as I came back to my starting point, I jumped a little, as I saw someone sitting who I hadn't noticed before. But they disappeared just as quick. Must have been my eyes playing tricks on me

. I had a bite to eat, then headed downwards in the direction of Beinn Ime. The descent was fairly easy.
Began the ascent of Ime, the ground was rather wet and squishy. There were some people running downhill past me.
Came upon snow again, and as before, I used someone's previous footprints as steps. Reached the summit, which was surprisingly quite warm 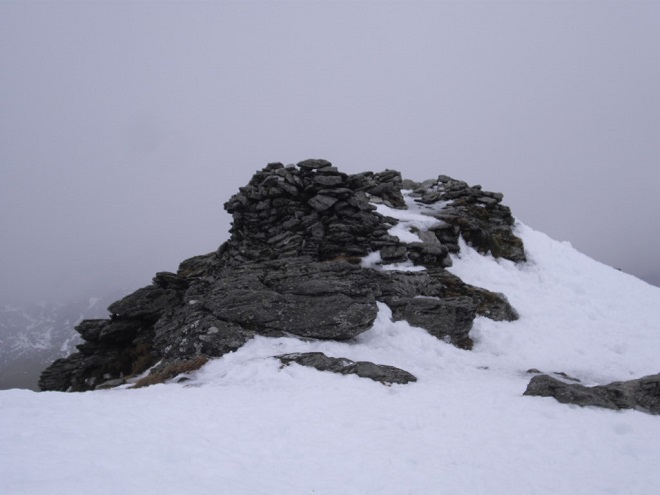 Good visibility all around, though the cloud would come and go. Made my way back down past the cobbler and headed for home.