Ben Lomond - Made It This Time!

Ben Lomond - Made It This Time!


14 whole days she has been smugly grinning down on me, laying down the challenge to try again if I dared! Check out the walks diary that says "Failed Summit" and you'll see the weather beat me (off??) at the top - and as I wasn't wearing a parachute, was safer to throw in the towel and turn back .... Hmmmm, now, how much would I have given for a towel on that last wet soggy day!

This time, checked every available weather forecast (amazing how they're so variable!) and decided that there was going to be no rain from 10:30 onwards, so would start from Rowardennan Car-Park at 11.00.

Scooted through the foliage, gurning at the rock where I slipped last time (and said goodbye forever to a lovely flask containing home-made mushroom soup!) and strode up and into the sunshine .... nope stop! That's in my dreams! Strode out into the white cloud, with grey clouds looming and rain clouds in the distance. Visability - well, could see my feet, and this time they were dry! Managed to get a few shots down the Loch (Glasgow side - I'm sure there's a technical term for this) in between the clouds, and when I work out how, I'll add them in! 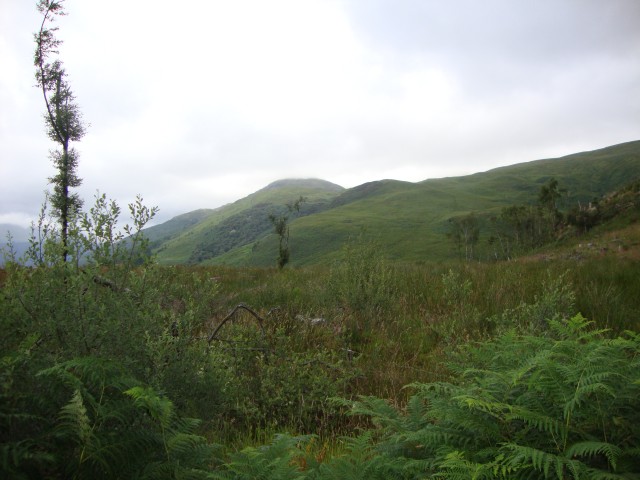 Carried on up the hill, playing follow-the-leader with another group of walkers who, like me were on a Sunday afternoon stroll in the park, and not into running up a mountain (DID YOU SEE HER??? THAT'S GOTTA BE SHOWING OFF REALLY HASN'T IT

By the way - I'm only saying that out of jealousy

My diabetic companion was trying out the Lucozade Sports methodology of keeping sugars level and it worked a treat - lot less icky than having to eat 4 Mars Bars! Stopped for coffee round about the Princess Chair (the big rock in the middle of the path) before going for the 30 minute slog for the summit. Views were terrific!!! Got to the top and had a fall about laughing moment with two chaps up there (who were waiting for their wives) when another couple offered to photograph us all together - hmmm, that would've taken some explaining to hubby! I guess you had to be there!

Got down n' cosy with fleece, gloves, hat, scarf to enjoy a scrummy picnic at the top (companion makes the most smashing sarnies - Dairylea and sundried tomato - wow!) before setting off for the walk-down.

And that's when the skies totally cleared - white cloud went away, views for miles and miles all around. Was tempted to go down the Ptarmigan, but didn't have a map with me and didn't want to just guess it, so went back down the same slope as came up. Got a goregous face tan (okay - rudolph would like it

and legs got a wee bit o' colour too - who needs the Med! My one teensy eensy criticism of some of the walkers on the Ben, was this thing about stopping (and sitting) in the middle of the path to rest a while, instead of using grass side boulders. Saw a couple of people nearly landed on as a result, and one poor lady went flying when a downcoming walker knocked her (no angry words allowed on Mountains please!!), oh, and everyone who kept telling me the bar at the top sold G&T ... fibbers!

So, finally got to the bottom and did that mad dash to the loo for the everlasting pee thing (you have to be a lady who has given birth to children to understand this need!) - is that too much information in a walks diary

and then made way to the car. Was set upon by a swarm of small buzzy things (the Ben's revenge??) so murdered as many as possible and set off along the banks to a less invaded place to enjoy a final post-walk coffee!

Re: Ben Lomond - Made It This Time!

Well done - I've had a couple of mountains which have kept me at bay for a few attempts - it's very annoying isn't it! And yes, those people who have to sit along the path on the way annoy me too - no idea why they sit in the middle of it!