Kintail meet - the high tops (but not high enough)

Kintail meet - the high tops (but not high enough)

After meeting up with some old friends from the Dundee Mountain Club earlier in the month and winning the Mountain Mind quiz, I accepted an invite to go on one of their meets. The Morvich outdoor centre in Kintail is actually way easier for me to get to than anyone in Dundee, so despite taking the bus, I was there before most other folk on Friday evening.

Although I've never been out with the club before, there were a fair number of familiar faces from my university mountaineering club days, so it felt like home

. On Saturday, it was hard to predict whether the summits would be above the low cloud, so I joined in with Andrew, Berenice, Lena and her 6 year old, Anton. Last time I was out on the hills with Lena and Andrew was for my final Munro almost 10 years ago, and now Anton was keen to go up his first. A'Ghlas-bheinn seemed to have all the requirements of a first Munro - interesting walk with lots of rocky bits, not too wet and boggy, the odd patch of snow, and no narrow ridges to fall off.


Beinn Fhada.gpx Open full screen  NB: Walkhighlands is not responsible for the accuracy of gpx files in users posts
We set off just before 9 on Saturday morning and wandered round into Gleann Choinneachain. I have a soft spot for this glen and the zigzagging stalker's path that goes up it, and it looked good even in the overcast greyness. After taking lots of interest in a shredded deer ( we wondered how it might have ended up scattered over such a large area. Maybe it fell from the cliffs above before being torn apart by scavengers?), Anton was less phased by a couple of burn crossings. 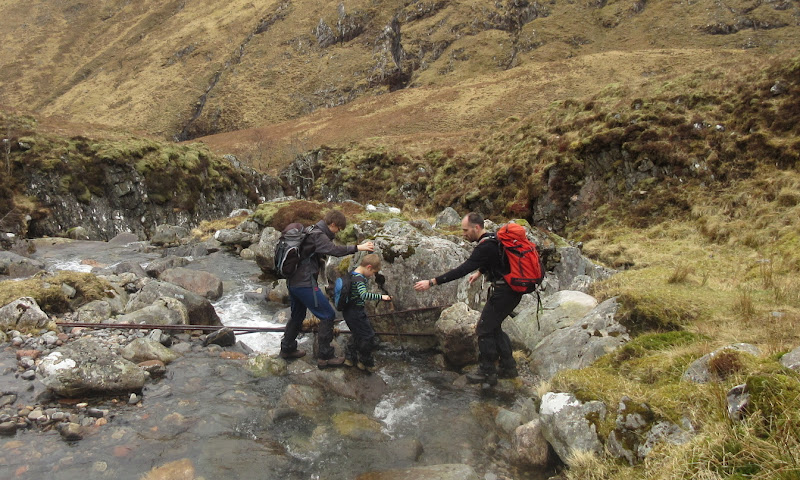 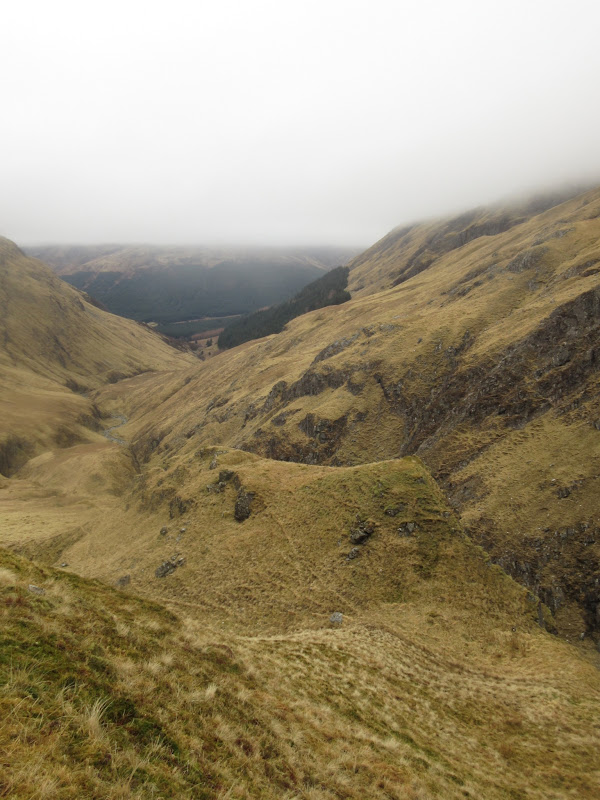 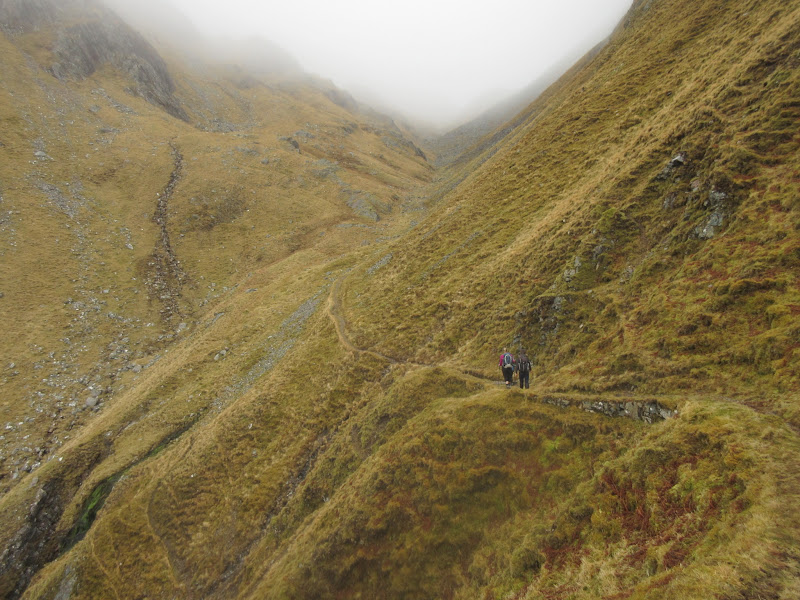 We hit the cloud at the head of the glen and turned left onto the south ridge of A' Ghlas-Bheinn. Despite the steep gradients, snow patches and endless false summits, the words 'are we nearly there yet?' were never heard, and Anton was first onto the summit cairn. Impressive stuff - I think I complained a fair amount on my first big hill despite being a couple of years older at the time

Steep bit on the south ridge of A’ Ghlas-Bheinn: 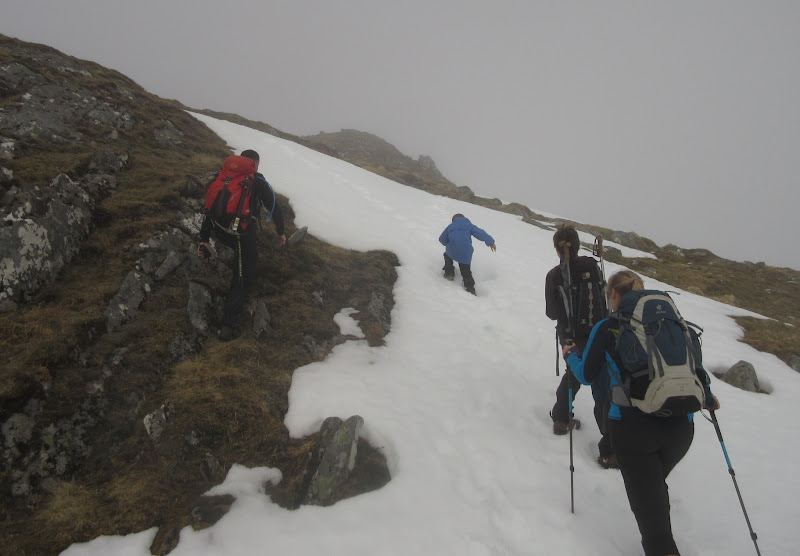 Anton on top of his first Munro: 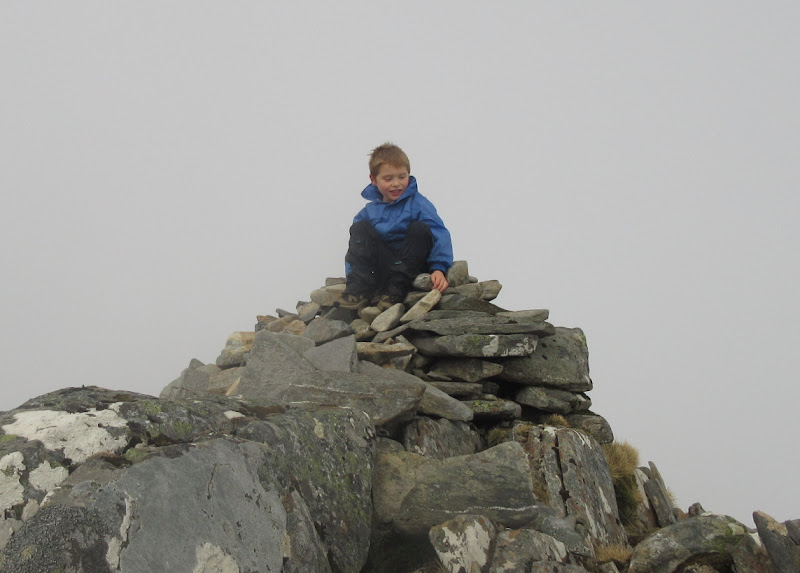 I was actually disappointed that this wasn't another false summit, as we had just reached the point where there was intermittent sun and blue sky overhead, and another 50m or so of elevation would have had us properly above the clouds.

Clearing a bit on the summit: 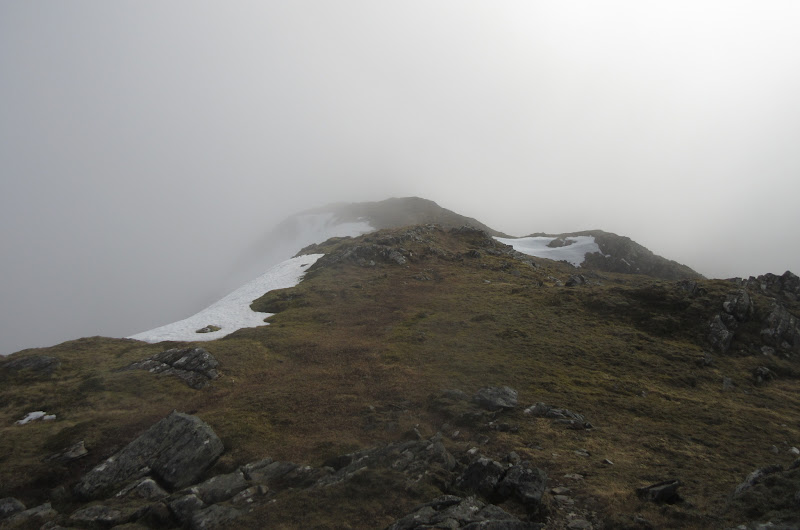 We spent a good half hour on the summit eating lunch and sitting on the lovely warm rock (which had obviously seen a lot of sun through the week while I'd been at work), before deciding it was time to leave. I now had ideas of breaking through the inversion by going up Beinn Fhada, so dropped back down our route of ascent to Bealacb an Sgairne. The others carried on to pick up the Falls of Glomach path as Lena was worried that Anton would tire out before the end of the walk. Apparently he was still running and jumping down the road to the outdoor centre, so obviously not!

…and a bit more on the way back down – Lochan a’ Bhealaich: 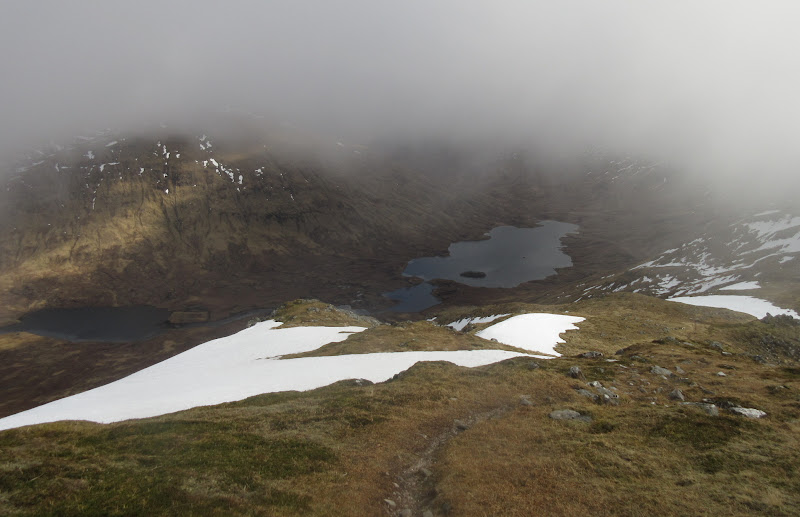 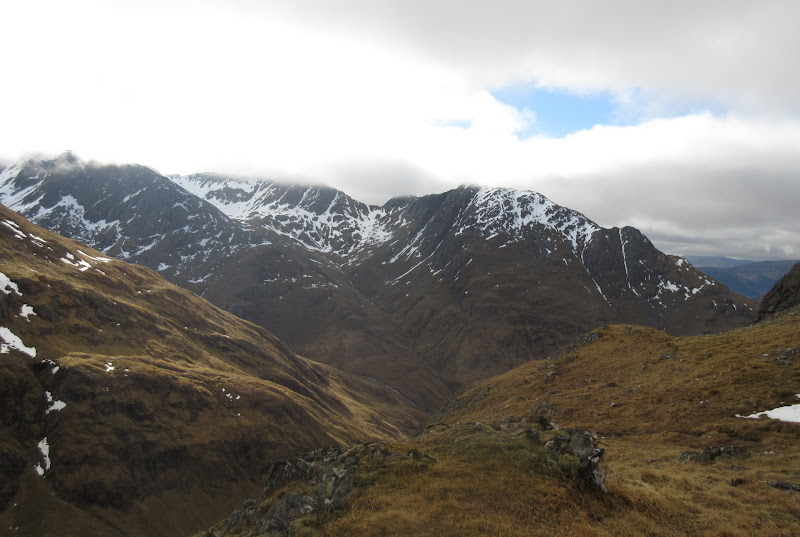 The cloud level had risen considerably since we had started, so I was soon clear of it, with dappled sunshine across Lochan a' Bhealaich and Sgurr Gaorsaic. This was good, but also made me doubt that I would clear the inversion on Beinn Fhada. Looking down the Glen, I could see a lone mountain biker descending to Morvich. Mostly a walk with the bike I would have thought, but he was doing a pretty good job of staying in the saddle. I briefly wondered if it was one of our larger group (they had set out on the same circuit of Beinn Fhada), but there were supposed to be 3 of them together so I thought not.

An Cruachan and Lochan a’ Bhealaich: 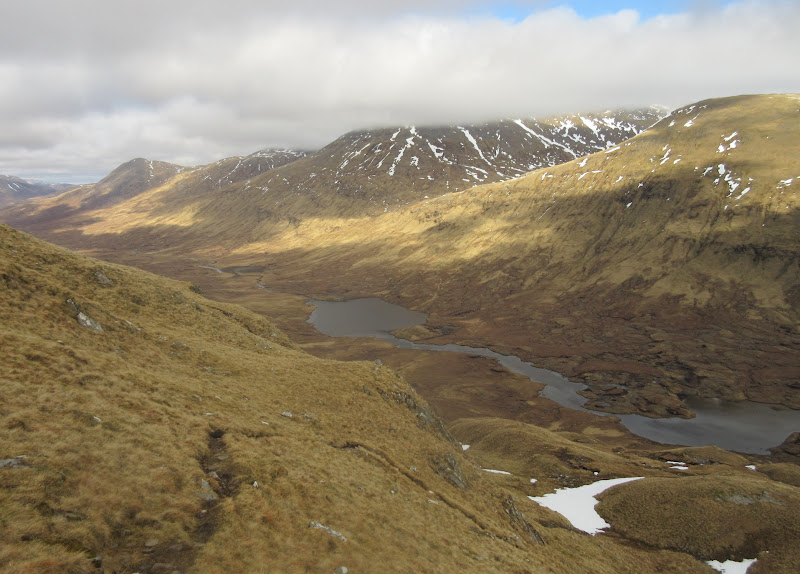 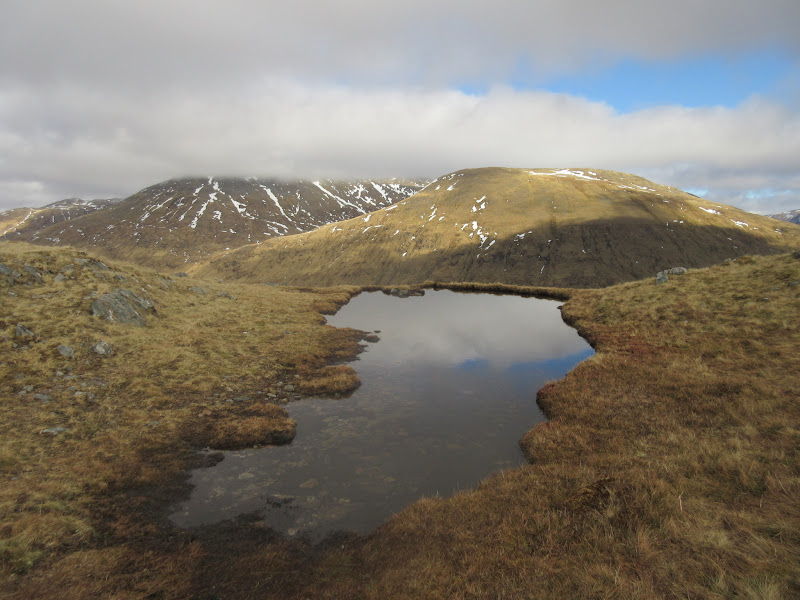 Back down Bealach an Sgairne: 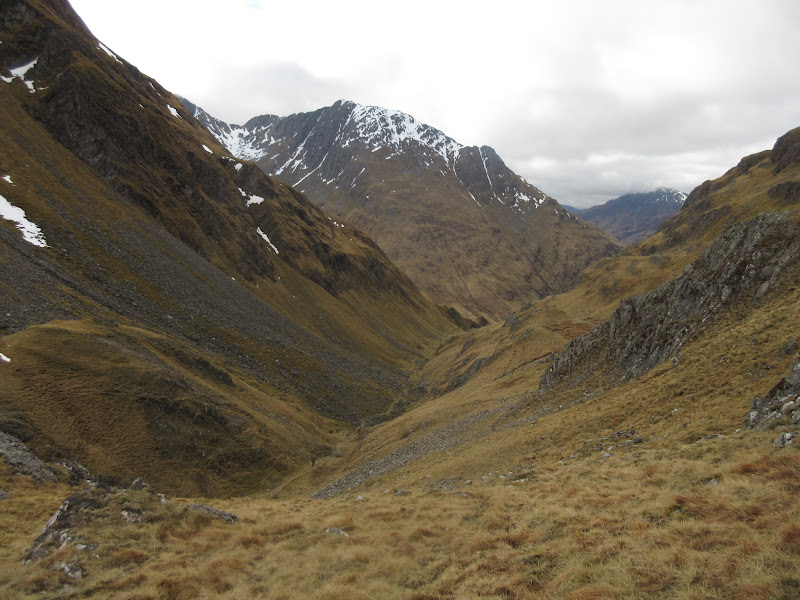 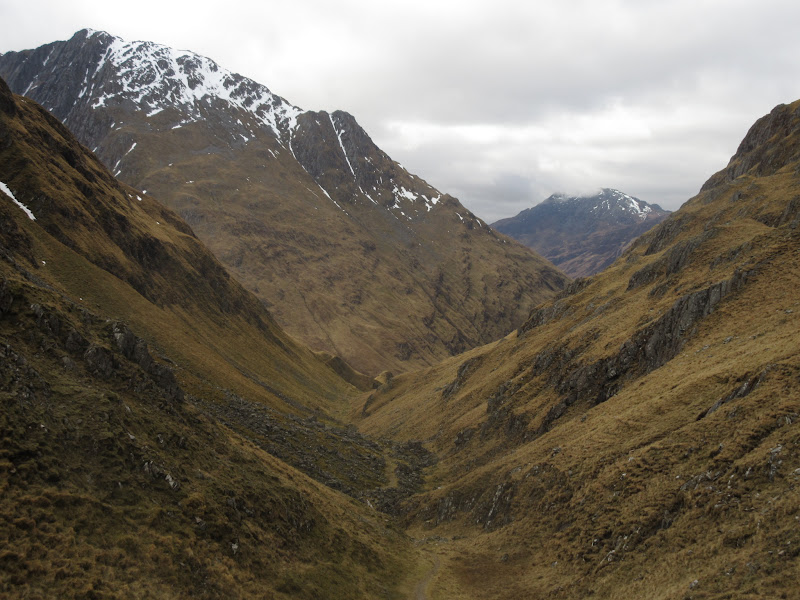 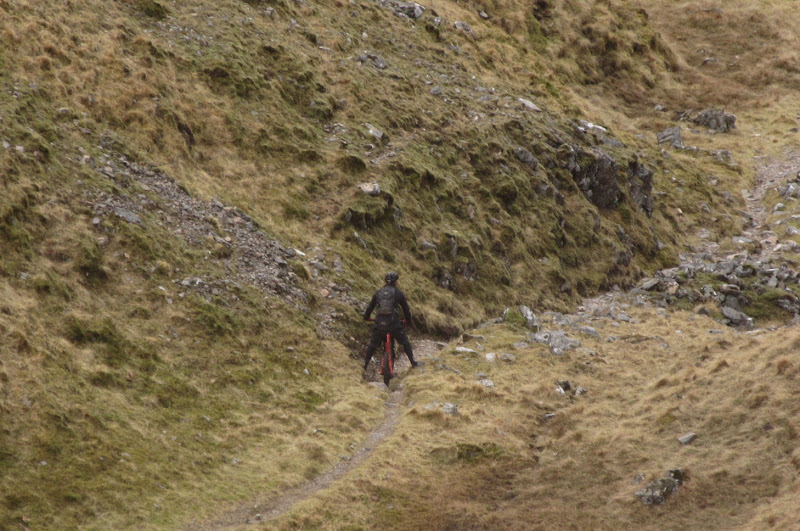 At Bealach an Sgairne, I turned eastwards, as I had decided to include eastern top of Sgurr a' Dubh Doire in my rambling. I rather like this drop down to the loch - it feels like you have crossed into somewhere much remoter and harder to reach. I had originally planned to follow the longer skyline up onto the plateau, but looking up into the northeastern corries, it looked like there was a steeper ridge leading more directly to my top. I followed this fairly easily onto the summit, with some fine looking cornices at the back of the corrie to my right. There was some nice patchy sunshine down Glen Affric, but sadly the top was I. The clag when I got there. 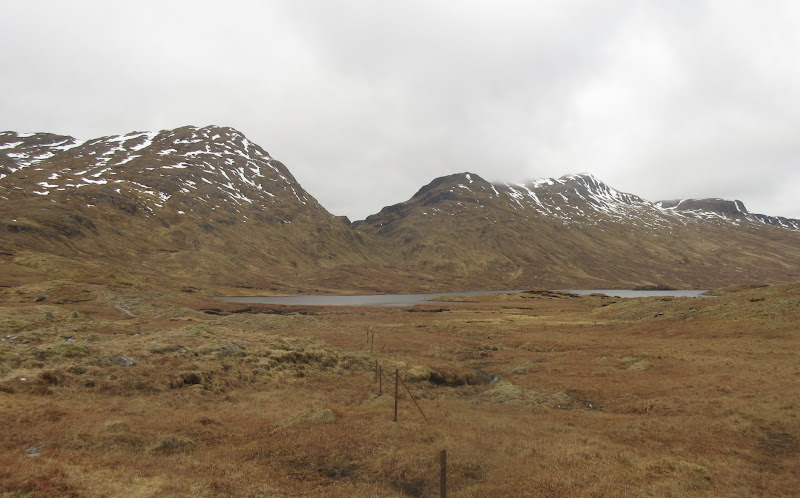 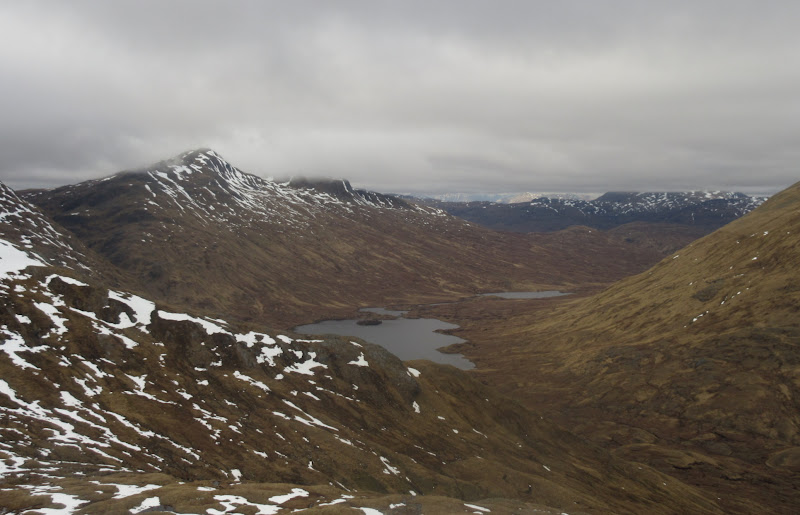 Up into Coire Toll a’ Mhadaidh: 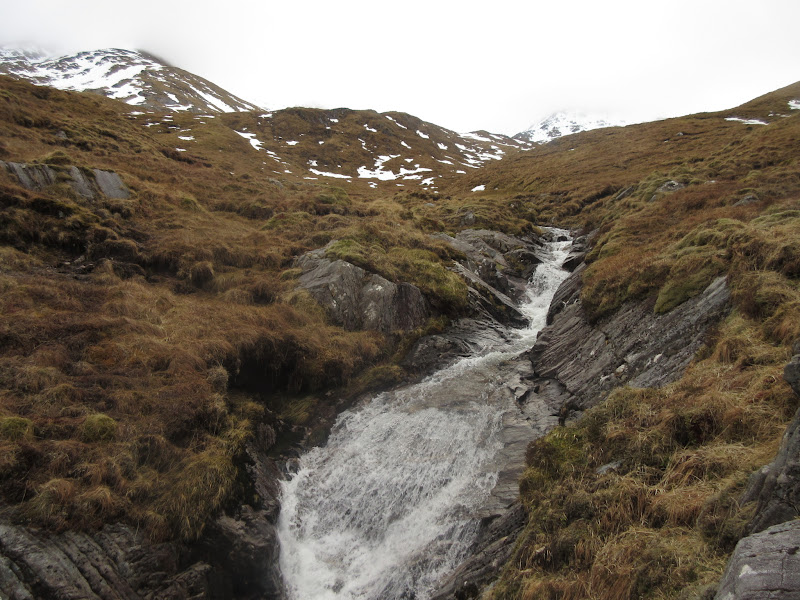 Time was dribbling away faster than expected now, and given the clagged-in nature of the summits, I decided I'd probably keep things simple and follow the good stalkers path down from the summit of Beinn Fhada, rather than traverse out to the west end of the mountain. Before that I had to reach the main summit of Beinn Fhada itself. The walking was easy, but having not looked too hard at the map, there were more minor tops than I expected on the ridge.

Looking towards the summit of Beinn Fhada from Sgurr a’ Dubh Doire: 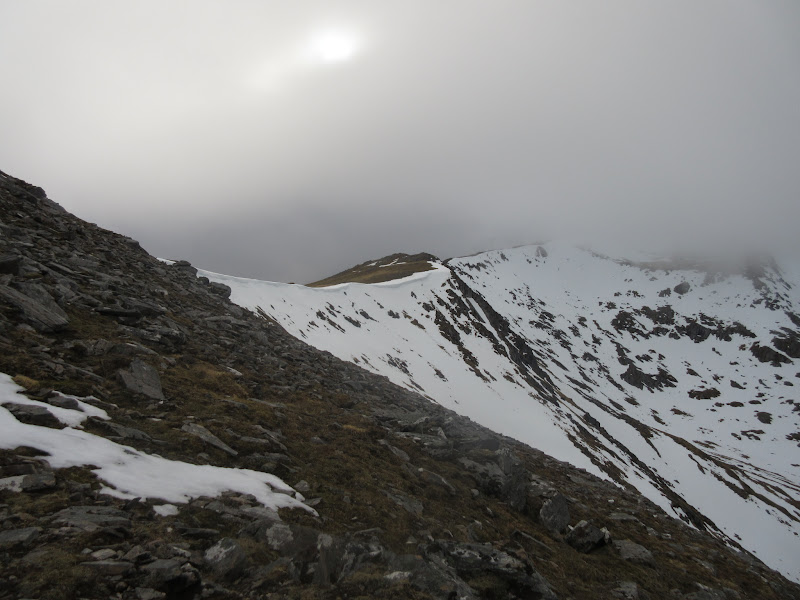 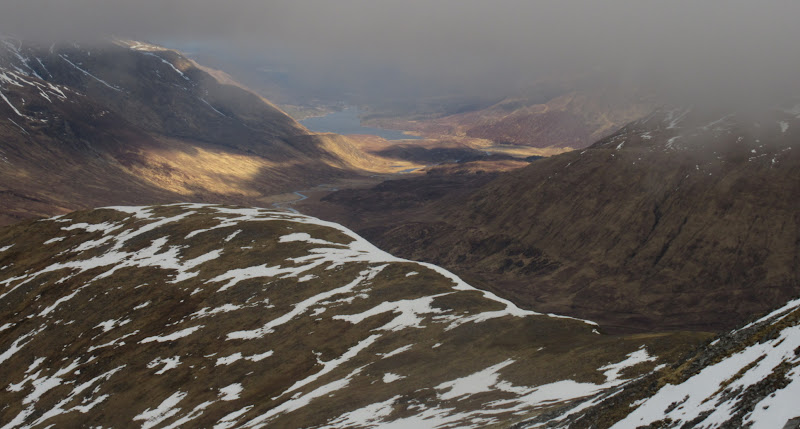 North to Faochaig and Aonach Buidhe: 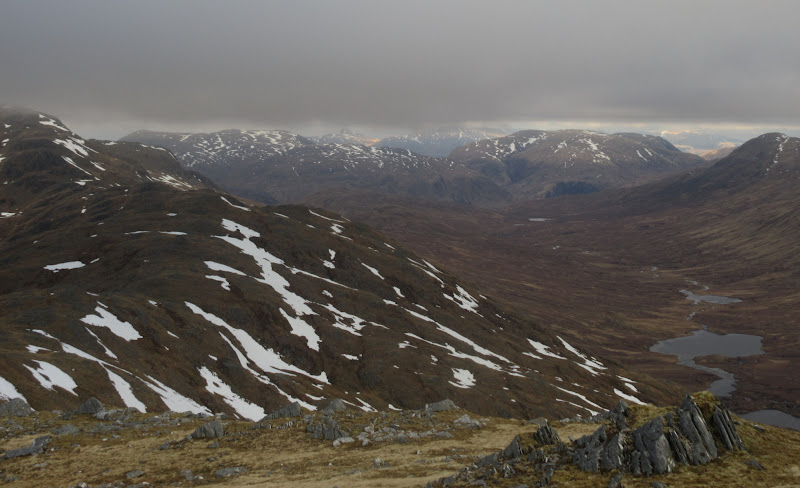 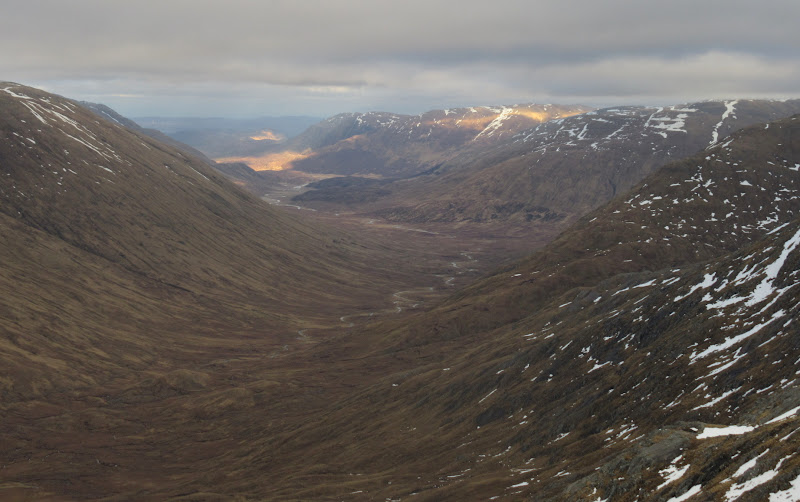 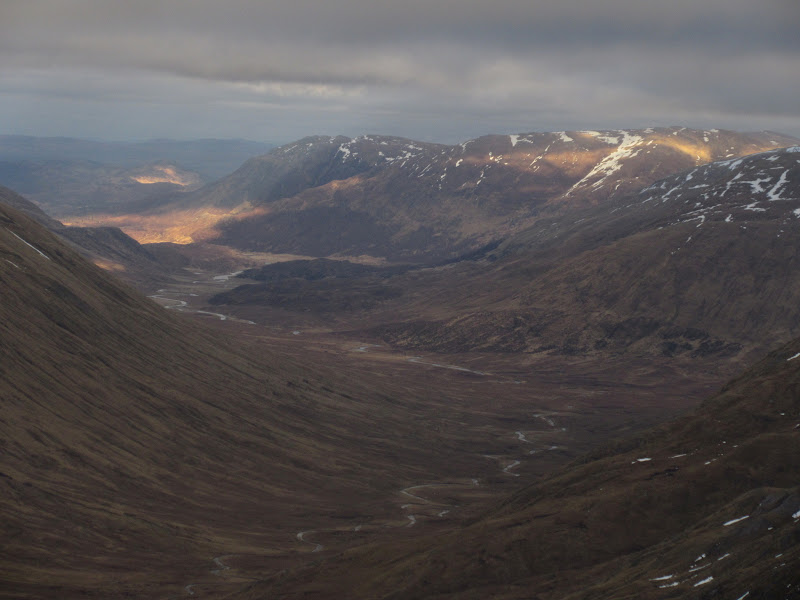 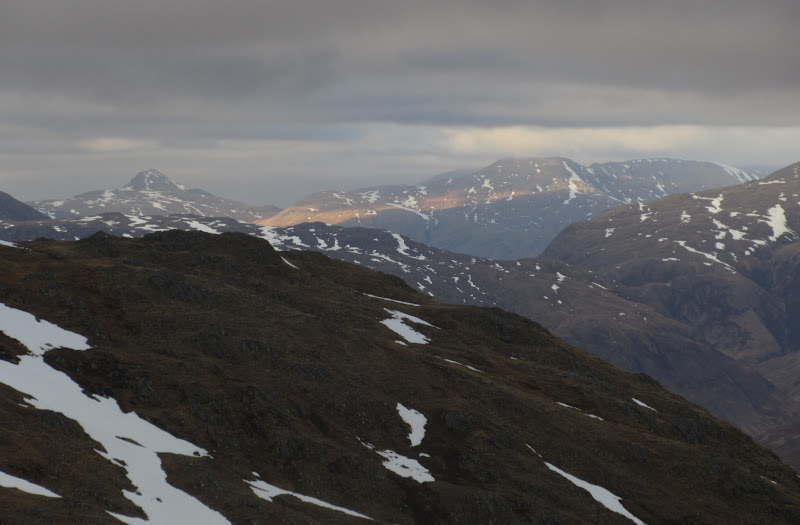 There was nothing to see at the top. Slightly annoying given the stunning inversion photos people had been posting all week, and also not adding much to the great memories of this hill. Fortunately it is within the realms of an easy daytrip for me (even without using the car), so I'm sure I will be back again before too long. 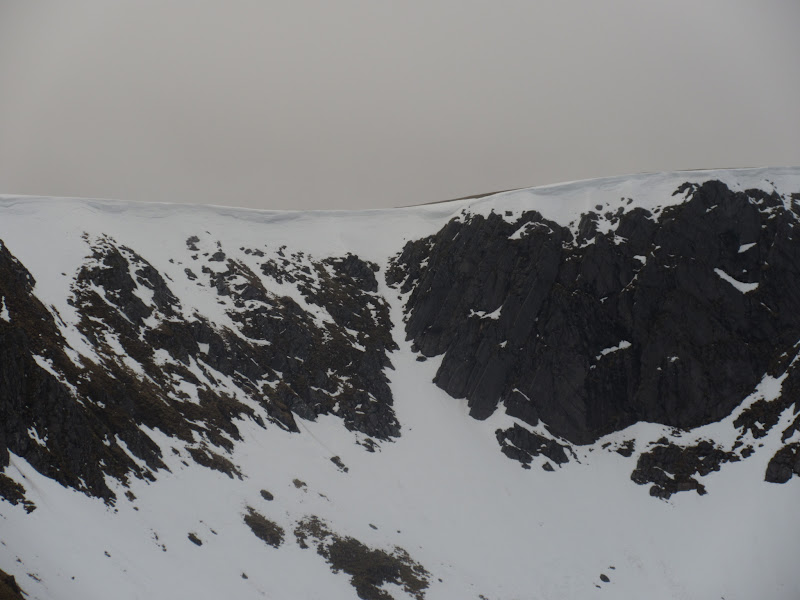 As predicted, it was down to the good stalkers path and back into Gleann Choinneachain rather than traversing to the west. I cleared the cloud about 150m down, and there was no denying the impressiveness of these corries and the path even in the grey weather. 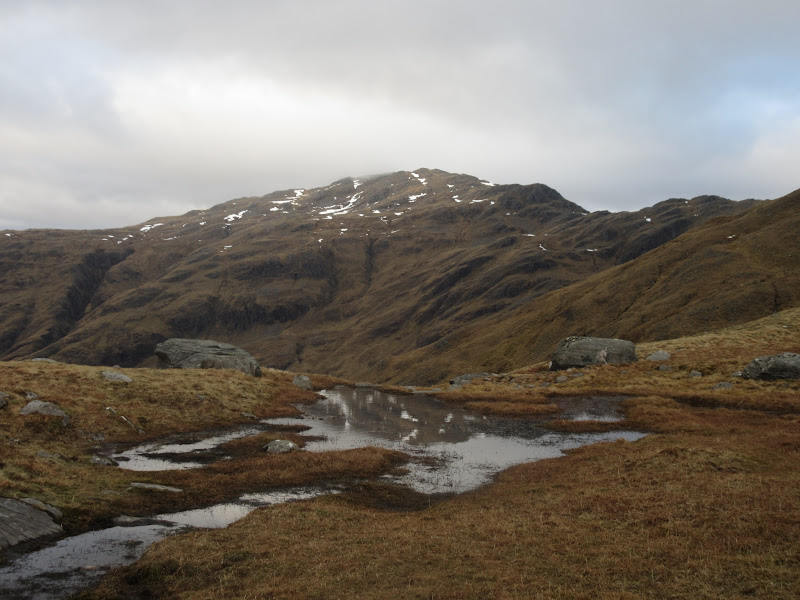 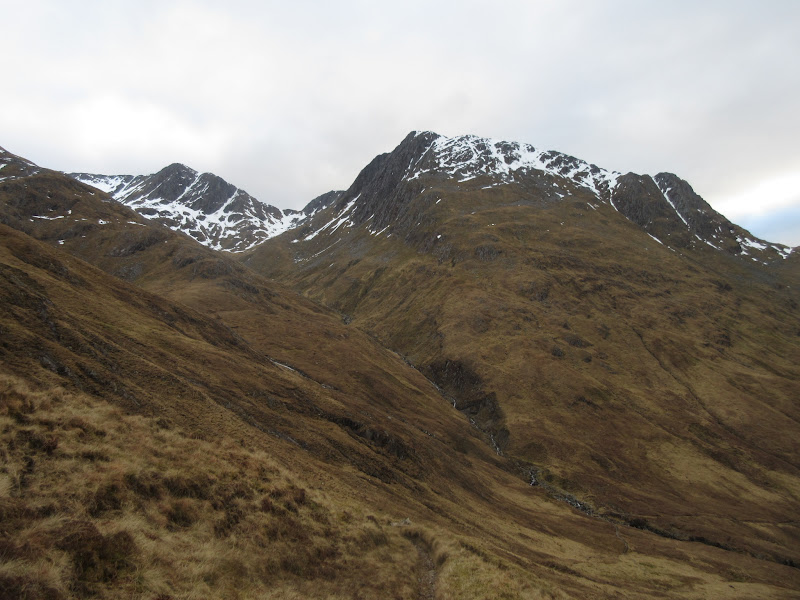 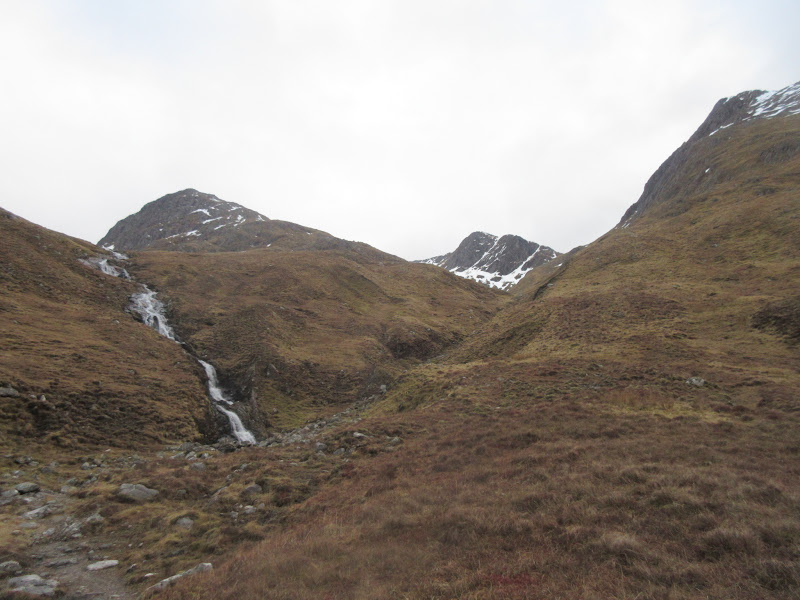 I was flagging a bit on the walk-out to Morvich - not as bad as last week, but definitely still a little down on strength after the man-flu. By the time I got back to the outdoor centre, is was 7pm rather than the 5 or 6pm that I had suggested. Far from being late, I was one of the earlier returnees, the mountain bikers returning last after 10 pm. Props to the group who decided to do a round of the eastern Glen Shiel ridge (Ciste Dubh to Saileg) by walking up Glen Lichd from the centre rather than taking the car round. A good evening followed.

Back up Bealach na Sgairne: 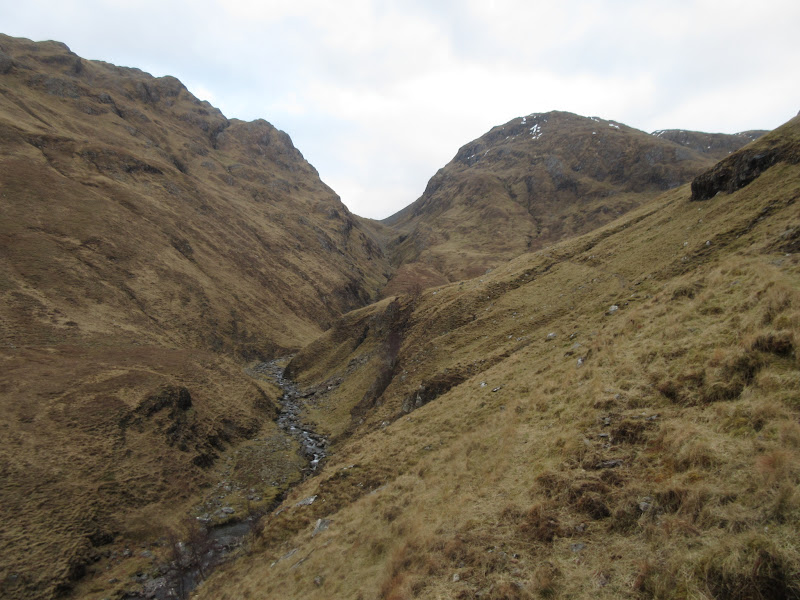 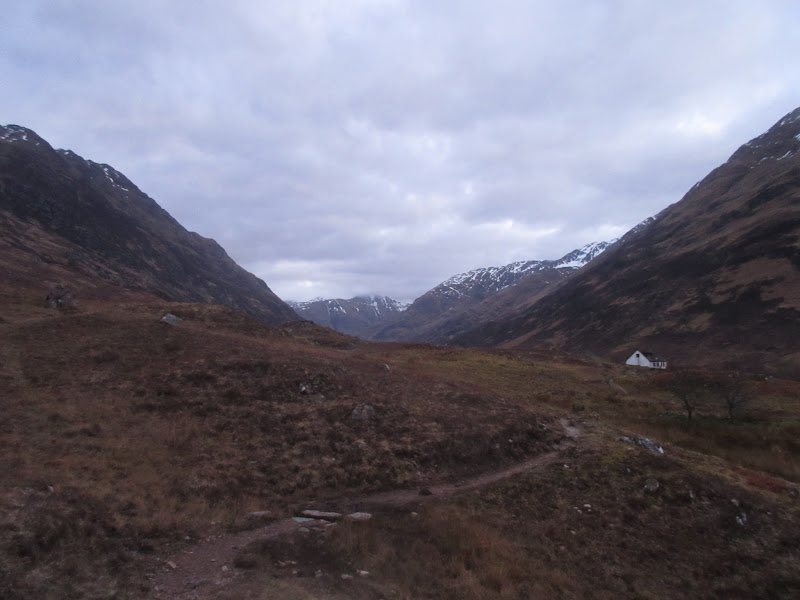 The next day I wa undecided on what to do. The main issue was my transport home. There was a bus at about 10:30am then one at 7pm. If the weather had been really good and I wasn't behind on my decorating chores back home, then I might have stayed for the day. However it was a bit grey and I was feeling guilty about spending the whole weekend away at rather short notice, so I headed for the morning bus. Still an enjoyable weekend and a likelihood that I will catch up with some old walking friends a little more regularly in the future