Each on its own

Each on its own


It was nearing midday by the time we finished our walk at Balquidder but the morning cloud had now nearly all dissipated and there was still plenty of time for a relatively short Corbett ascent: Beinn Each.


beinn-each.gpx Open full screen  NB: Walkhighlands is not responsible for the accuracy of gpx files in users posts

We slotted into the last proper remaining space in the busy A84 layby by Ardchullarie Burn, crossed the bridge and headed uphill on the signposted track. The hill path soon branched off on the left, running alongside the edge of trees bordering fields and ascending fairly gently at first. Soon it crossed a tributary of the main burn and entered the forest properly. The path steepens and becomes a little loose underfoot: a number of trees have fallen across the route here but can all easily be stepped over or ducked under. Across a new track (if I remember correctly) and back into the forest until the main track up the glen is reached at about 260 metres above sea level. A respite in the ascent followed, with the first good views opening out to Creag a' Gheata across the valley. It was already feeling warm, so we stopped for a sandwich before leaving the last few areas of shade behind. View back to Beinn Ledi: Finally a first view of our target, hidden until now: Navigation's not exactly difficult for this walk, and a large sign shows where to turn off the track on a path across the open hillside. Shortly after leaving the track was the only remotely wet section of the route, thanks to the recent dry weather. This was soon passed and the path climbed steeply past a massive boulder. The views to the west improved with every step. The most impressive sight was Ben More, looking improbably huge above a wreath of cloud: Only a few small snow patches remained on these south and west facing slopes. 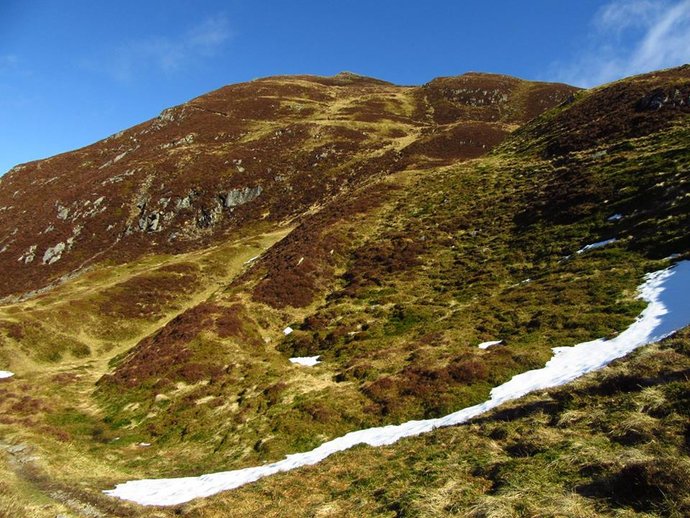 While the east facing slopes on hills to the west were still mostly white above 700 metres or so: Glen Ample looked particularly fine to the north, leading down to Loch Earn: Now on more of a small ridge, the path wound its way over a few rocky knolls to the summit, with only one soft snow patch covering a (flat) section of path. A group of at least a dozen people passed us in the other direction here - probably responsible for almost all of the other cars in the layby! Someone was just leaving the summit as we arrived, and we got the views from the top to ourselves. Beinn Each is often combined with Stuc a' Chroin via a knobbly ridge, but Each on its own was enough for us today. A tiny remnant of the morning cloud hung over Stuc a' Chroin's southern coire as we arrived at Beinn Each's small summit cairn. A very bare-looking Gleann a' Chroin to the east: It had been t-shirt weather on the ascent, but the gentle northerly breeze that had so far been keeping things comfortable was noticeably cool as soon as we stopped moving - jumpers back on, it is only March after all! Meanwhile, the cloud over Stuc a' Chroin finally cleared: Any other descent route from Beinn Each seems to be pathless, so we headed down by the outward route, taking our time and enjoying the views. Nevertheless, the flatness valley track was welcome relief, as was the shady forest. Certainly one of the more straightforward Corbetts we've tried so far - maybe not a classic but some excellent views, a good path... and to be honest, any hill would look good in this sort of weather!

Re: Each on its own

Fantastic photos. Looks like you got far better views than us at the summit, just 10mins after we left! We couldn't see anything to the east. Did you manage to see Dumyat and Wallace Monument from the summit at any point?

I was leading that large group, were you one of the two guys in the blue? We only took 3 of the spaces in the lay by and we squashed together, promise

We also had to squeeze in the lay by at 10am so it must be a busy one!

Re: Each on its own

Thanks, yes, that was probably us (I can't remember what I was wearing!). Shame the views weren't so good for you, although if you'd been even earlier it might've been even worse. We drove past about 10am and the cloud was well down on all the hills.

We didn't see the Wallace Monument - too murky under the inversion to the south although it might've been just visible if we'd looked carefully.

Hope you had a good day - was it a club you were leading?