Decided at the last minute to do this walk with my brother - the weather seemed a bit unpredictable! One forecast said sunshine another said rain... Oh well, off we went prepared for the worst, wet weather gear and so on.

about turn and a few minutes later we headed off on the correct direction only to find a gate blocking our way up the road a bit!!! After a moment or two my brother - "Delberto" caught me by surprise by coming up with a solution - "well, go open it then!" he said. Why didn't I think of that? You would think that after such a poor start things could only improve right?... Well yes and no....

We parked up fine and set off up the route only to discover a gate across the bridge - I managed to solve this problem myself. on to the hill itself and I was never sure if we were walking up a path or a stream.

The water wan't deep so we plunged ahead. And boy was it steep - especially as this was my first real climb since my Hernia operation, so I just took it easy with plenty of pauses to enjoy the wonderful view of the loch - the sun was shining...Things were looking up Enjoying the views of the loch

After a brief unscheduled stop I continued up the initial part of the route until after about 1 hour 30 minutes we came to the small cairn where the path joins another with fence posts, things were less steep here. Shortly afterward we reached the top of Creag an Fheadain (888m), were we again pause for some snaps. 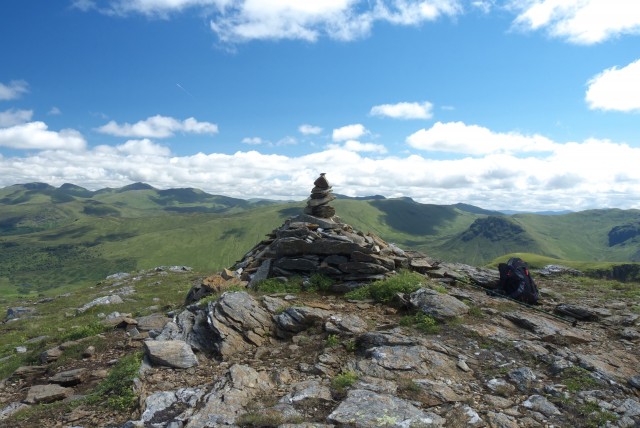 top of Creag an Fheadain

It was at this point that I should have been alerted to a possible problem... When taking a drink I noticed one of the zips on my backpack was opened - a quick check and all seemed present and correct

Anyway - we continued on an easy path to the next top of Sron Chona Choirein (920m) for another spot of posing for snaps. Posing with Stuchd an Lochain behind

A little further on we caught sight of lochan an Cat and stopped for even more snaps - this was wonderful... Great weather and lots of posing for photos. We reached the summit of Stuchd an Lochain 3 hours after starting off. I think the views that day were amongst the best I have ever seen. We could clearly see for mile upon mile of unbelievable scenery - 17 miles away Buachaille Etive Mor could clearly be seen. 26 miles away Ben Nevis could also be made out. We spent about 30 minutes relaxing and taking pictures in the perfect conditions. It was here that I noticed I had lost something (my compass) - no big deal, a quick retrace of steps to find it, no doubt where I had been taking photos. Oh how I wish I had checked if anything else was missing

Sure enough I managed to find the compass where I took the pictures of the Lochan - I felt smug with pride as I marched down the hill. Saved myself a couple of quid there I thought!

I appologise to the family, on their way up, who had to witness this horrible sight. We arrived back at the car 5 hours 30 minutes after starting off and it was one of the best days out in the hills I've had. The road was then blocked by several Highland Coos - who were determined not to move out of the way for the car. Even when I got out of the car they just looked at me... and I looked at their horns and I got back in the car - "beep your horn" I said. He did and they continued to ignore us until finally they got bored and wandered off. This day had indeed got better after its poor start after all... Or had it?

It must have fallen out of my backpack when the zip was open - Why did I even take it????

After a while my wife stopped calling me an idiot as well as other choice phases which I won't repeat. She then phoned the bank to cancel my card. Luckily I was skint as usual anyway so no big loss - but it is damned inconvenient.

Shame about the wallet though

A little jewel this munro, imo. On a good day the views are fantastic, as you managed to capture with your great pics.

Great pics and report - how awful about your wallet! I'd keep checking with nearby police stations I think for a week or so in case someone hands it in - did it have any form of ID in it? That's a nice hill but is really steep - what a choice for the first hill after your hernia op!

All that was in my wallet was my bank card and some odds and ends of paper with names and phone numbers - none of them mine though. I imagine a decent cop could trace me through my bank account though.

It is an inconvenience that's all. The stunning views made up for it.

very good report- surely worty of report of the month???
photos are superb. enen the bloke with the specs and beer belly looks handsome as hell- enough to get me out the closet....

Bloody hell - I scrolled down to that second pic and didn't realise what I was looking at. For some reason my brain got momentarily muddled (nothing new there!) and thought it was a shot looking UP the hill rather than down, in other words the blue stuff was the sky, not the loch, and the object in it was a UFO, not a boat!

When my mate and I did Meall Buidhe a couple of years ago, we made the same mistake, missing the turn off for the Loch an Diamh dam. We parked up by the bridge just short of Stronuich Reservoir and got all booted up. A couple were heading off just as we pulled in, and we wondered where they were going. I could see the Munro book open on the dashboard, and glanced in to see it was open at the Meall Ghaordaidh page. Of course, thinking we were somewhere entirely different, we scoffed at their ignorance thinking they were away off up the wrong hill

. I was still bending down tying my laces when I realised that Robin was offski along the road already, so I hurried after him but within a matter of seconds I was thinking something wasn't right. I checked the map and realised we had had some kind of navigational malfunction. I shouted after him but he didn't hear me and just kept ploughing on. Eventually the penny dropped for him too and he came back. We then rather sheepishly returned to the car and drove round to the proper start, hoping nobody was watching and laughing at us. I blame him (he was the driver) and he blames me (I was the navigator).

Excellent report though. I was just a short distance away that day on Meall a' Mhuic and Cam Chreag and it was an absolutely fantastic weather day. I got the same cracking views of the Buachaille, although the pics of it aren't as good as yours. Your camera obviously has a better zoom function than mine.

Excellent report Raymond with some cracking photos. Lovely sunny day. I seem to have forgotten what that is

Excellent, really enjoyable report, especially as I have no pics of my outing to these many winters ago. Looking at the 2nd pic - forgive me for saying but...climbing that gate actually looks like a hernia operation.

I just wanted to add an update to this report.
I have got my wallet back

Now some of you might be wondering if I retraced my steps, or perhaps a fellow walker returned it?
No, the somewhat simpler truth is that is was stuck down the back of my brother's car seat. He only found it recently when giving it a good clean out before selling it.

You said it, glad you got it though.