2016-03-13_Mungrisdale Common.gpx Open full screen  NB: Walkhighlands is not responsible for the accuracy of gpx files in users posts

Another Sunday afternoon walk with Chris and Andrew.

Having been battered by the weather on Beda Fell a couple of weeks earlier, this time the weather forecast was more promising with no rain and less wind. I wanted to do Mungrisdale Common to get it out of the way and if time allowed to climb Blencathra.

We parked by the single track road below Mousthwaite Comb, a parking place used by TM when we walked over Bannerdale Crags and Souther Fell a few years ago.

Booted and away by circa 2pm. The weather was bright and relatively warm for early March.

This time, to even up ourrelative fitness, Chris and I laden Andrew with the rucksack and our 'bits and pieces'. However, it had little effect and he still made it look easy! 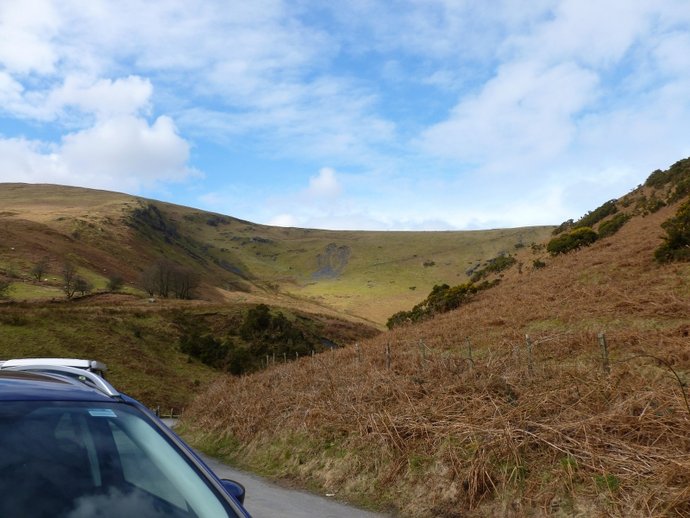 From the car looking into Mousthwaite Comb

A good path leads up Mousthwaite Comb onto the relatively flat area between Scales Fell and Souther Fell. From here we carried along the path on the south west side of the River Glenderamackin. It has a gentle gradient and a good surface and we made good progress. Sharp Edge came into view and looked impressive. We passed a group of 4/5 adults with a similar number of young children and met 4 or 5 other walkers before having a chat with a man at the head of the valley. 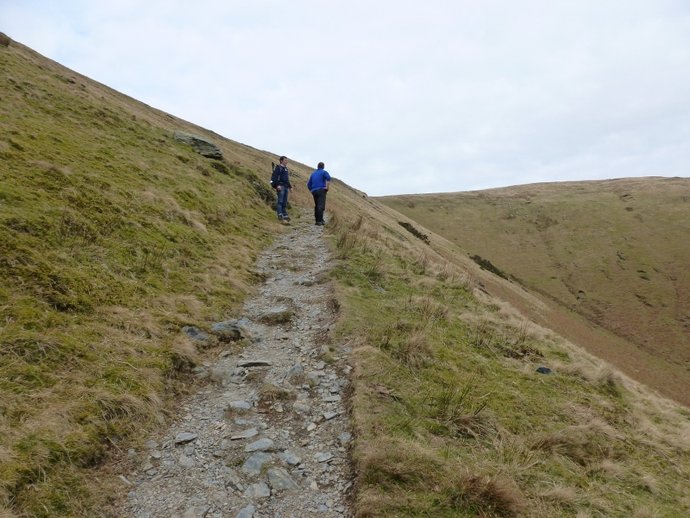 Near the top of Mousthwaite Comb 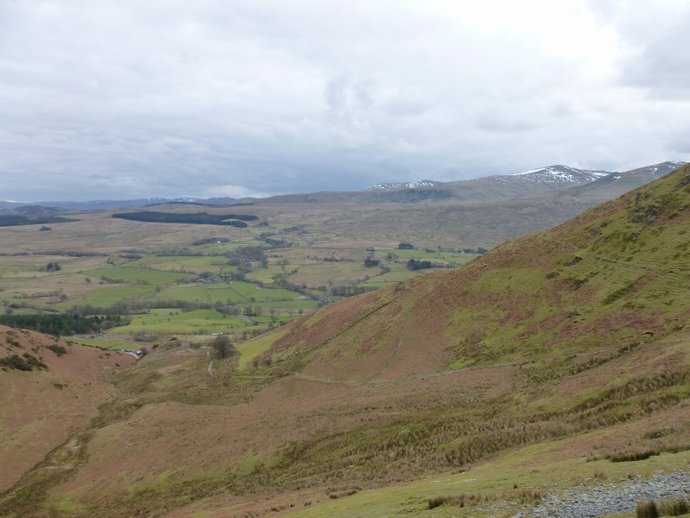 Looking back to the car! 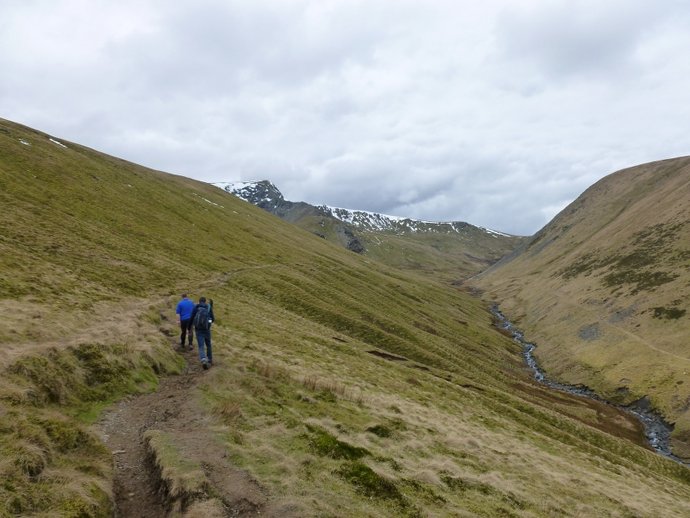 On the path in the Glenderamackin valley 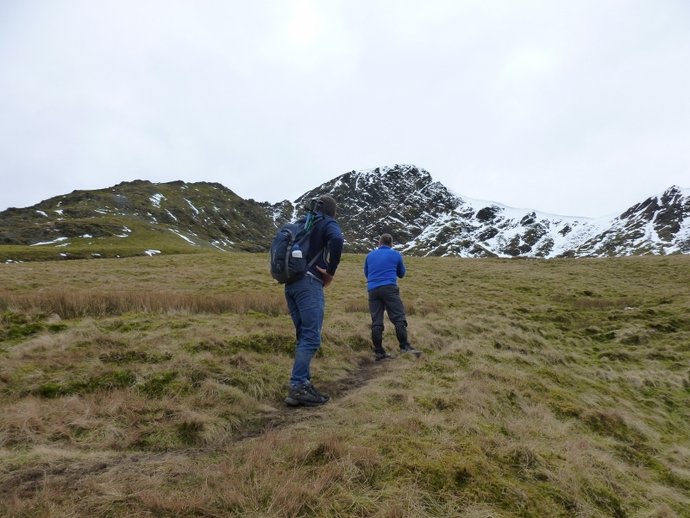 Sharp Edge from its northern side 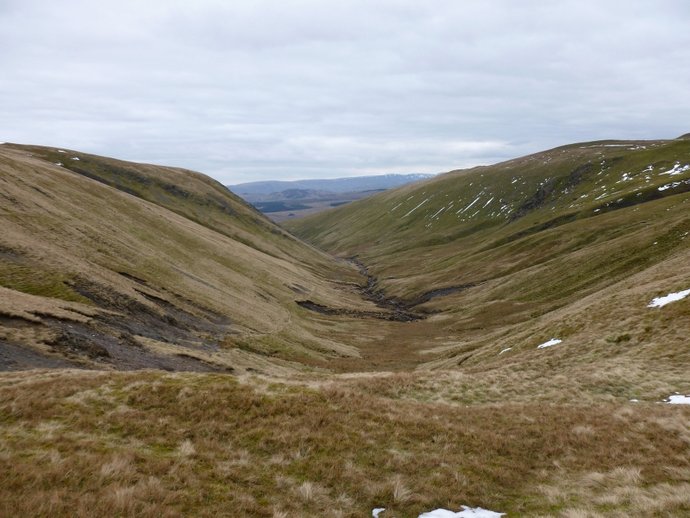 Looking back down the Glenderamackin valley

As we left him, we deviated away from the main path which either heads to Bannerdale Crags or in the other direction, heads towards Atkinson Pike and then Blencathra itself. Instead we headed due west maintaining our altitude and using the GPS to guide us toward the rounded top of Mungrisdale Common. I've seen many reports that describe the wet nature of this hill and although it wasn't dry per se, it was no worse than I had anticipated. 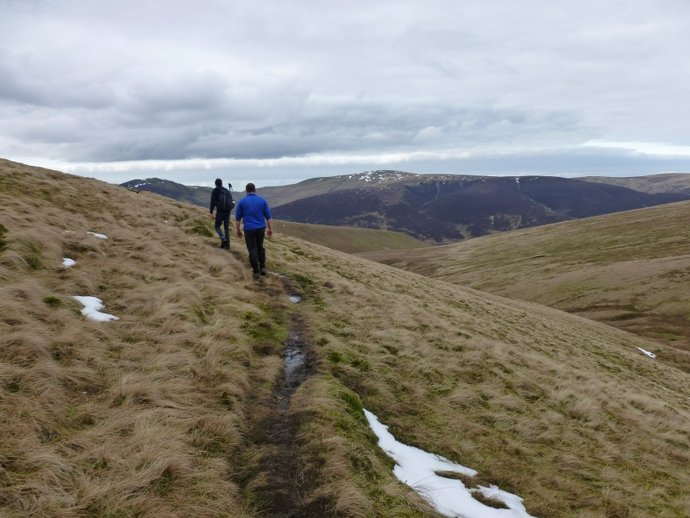 We stopped and took in the views; to the south there were some good distant views to the central and southern fells; further west Skiddaw and its outliers were close up; to the north was Great Calva and a distant High Pike; further east was Carrock Fell and Bowscale Fell. 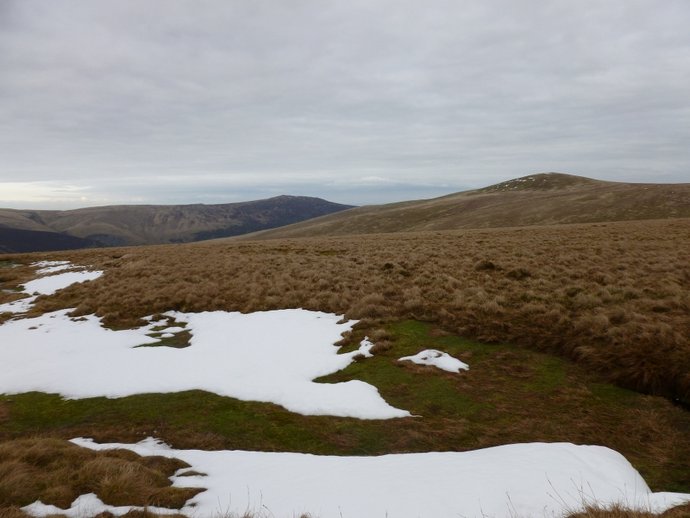 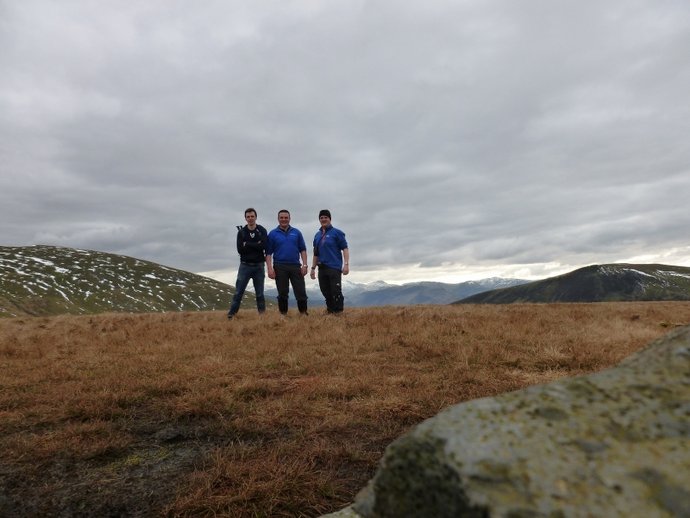 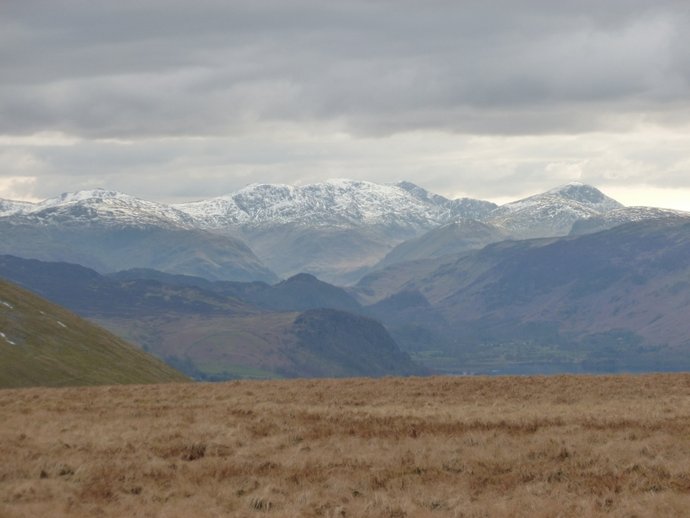 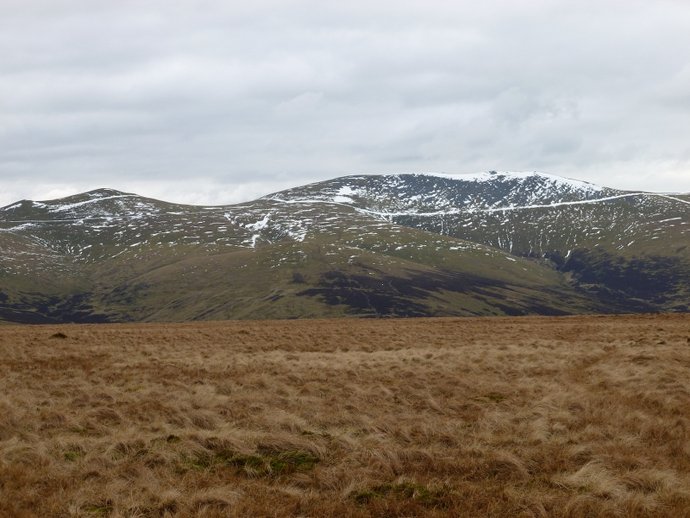 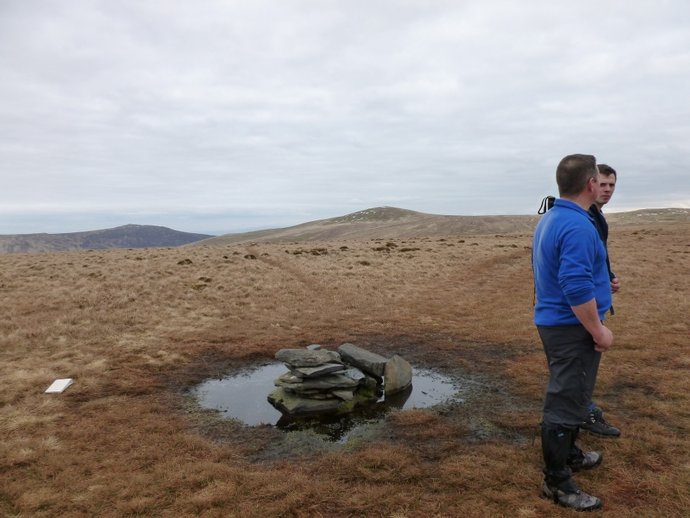 .... Carrock Fell and Bowscale Fell (the hills not the people!!)

Time was on our side so we decided to take on Blencathra (Chris and I had climbed it a number of years ago but this was the first time for Andrew). A broad and well used path leads from Mungrisdale Common towards the northern spur of Blencathra and as we got higher, we lost the wet, spongey grass and gained rock. The northern side of Blencathra Looking back to the rounded mound of Mungrisdale Common

The east side of the spur was full of snow. After a bit of huffing and puffing, (not Andrew or Chris (?)

) we reached Atkinson Pike. After a quick survey of the top of Sharp Edge we continued across and up to the trig point at the top of Halls Fell. There were a couple of patched of snow but nothing too bad. 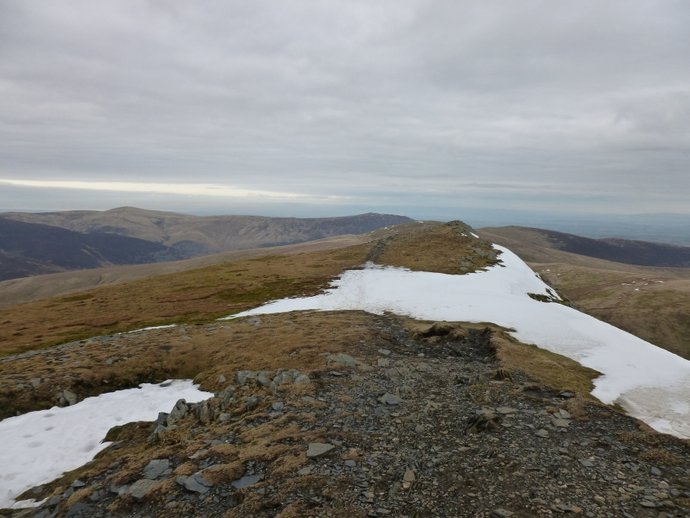 on the northern spur of Blencathra 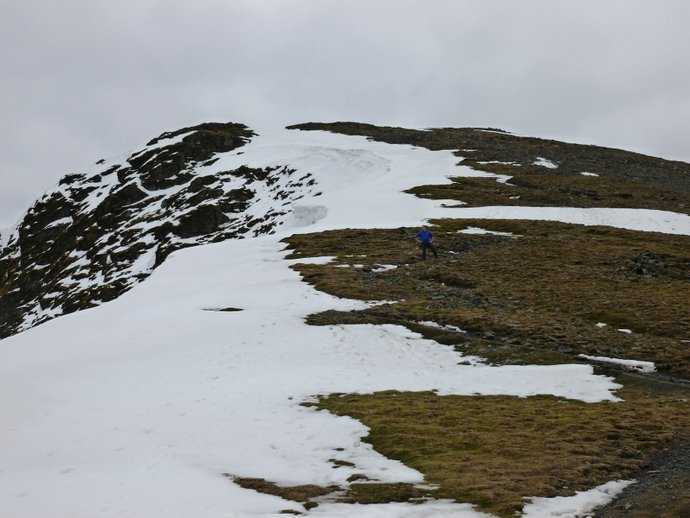 Chris and Andrew looking down onto Sharp Edge 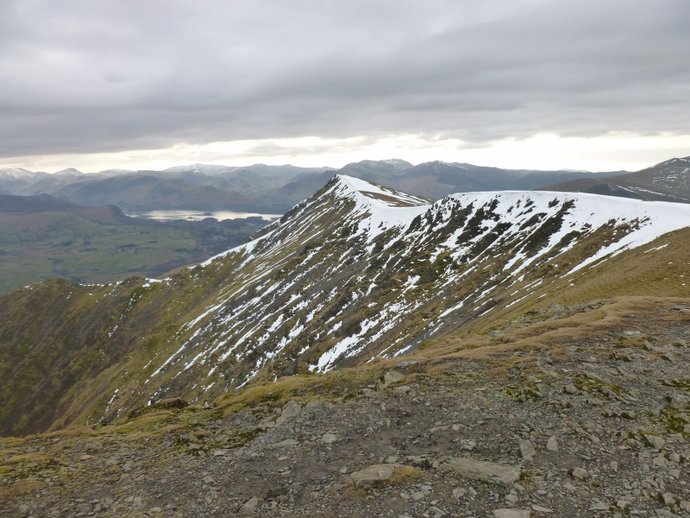 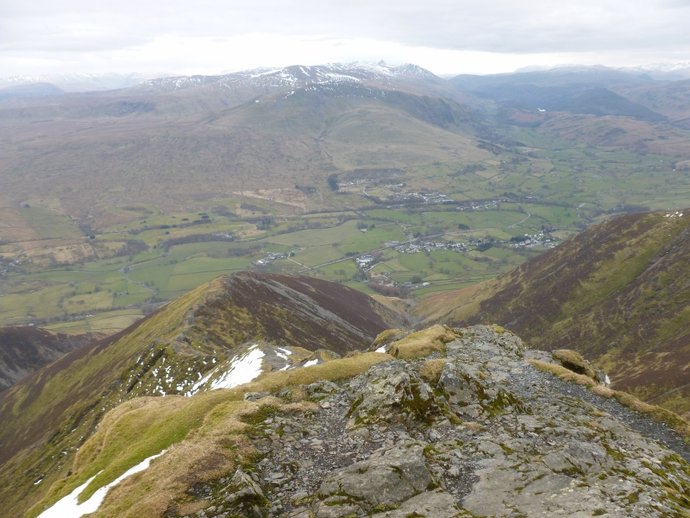 We headed down Scales Fell, initially down a steepish zigzag path but it soon receded to a decent gradient for walking. Over to our left was Scales Tarn and the impressive cliffs below Sharp Edge. We eventually dropped to the path above Mousthwaite Comb and then back to the car. The route down Scales Fell Last view back up Scales Fell to Blencathra

It had been another enjoyable walk, and a good way of making Mungrisdale Common a little more interesting.

Great looking hike MR, shame the cloud closed in as the day went on but it didn't stop you getting some cracking shots

Blencathra is the real deal though, good walk fellas.

Thanks TM. Its just as well Blencathra is nearby to deflect our attention

ChrisW wrote:Great looking hike MR, shame the cloud closed in as the day went on but it didn't stop you getting some cracking shots

Thanks Chris. It was an enjoyable afternoon.