A group of 5 travelled up to Fort William to do number 2 gully on Ben Nevis (Stevie, Dickie, Rab ,John Shirkie and me). At this point I had only completed 3 munros (non of them the easy way)

Stevie and Dickie were good climbers and had previous experience at this sort of stuff, Rab had done a bit of winter climbing too. As for me and John...absolutely he haw. As I fastened my crampons at the foot of no.2 gully I had no idea what I was letting myself in for, I absolutely trusted big Stevie and Dickie and was assured I would be fine.

Off we went ( I had 2 axes, one a climbing axe and the other being more of a walking axe, my crampons were borrowed from big Stevie and were not great, mental

Anyway off we went.

The route was fairly straight forward at first and the snow cover was good although limited at the beginning, it was however rock solid and great for the ice axes and crampons. The higher up we went the more narrow the gully became, it really straightens up too (almost vertical near the top). Other climbers in front of us were breaking up some large chunks of ice which flew past us on several occasions, the whizzing sound was scary as they shot past our ear. This was a bit unsettling as none of us had helmets and the speed and size of those ice blocks could have killed any one of us.

After about 45 minutes I could really feel my calves tightening up and it took all of my strength to keep going. It was at this point I noticed that one of my crampons had really loosened off and was hanging off my boot, I was basically standing vertical on one leg with a drop of hundreds of feet below me

I don't know why but I didn't really panic..maybe I was in shock

Anyway Rab who was coming up behind me stopped and cut a ledge with his ice axe allowing me to place my foot on the snow to rest the other leg. He then safely secured the crampon back on to my boot.

From this point on I was very much aware that of the crampon situation and really slowed down incase this happened again. Rab had now gone past me and all the rest were standing at the summit watching me climb the last 20 feet. The last few feet involved picking my way through a cornice on an overhang from the summit with big Stevie shouting 'Don't fall now Beck for Christ sake you've no chance of surviving a fall from here'.

I made it..only just! As I threw my ice axe into the solid summit surface the guys grabbed my arm and I pulled myself over the cornice

As I stood up my legs felt like jelly and guess what? the crampon fell off

If that had been 2 minutes before I would have been history. I walked a few paces towards the summit trig point and the other crampon fell off as well. It was then that Stevie admitted that the crampons (his old ones) were not really for this type of thing) eh right Stevie, now you tell me.

I learned valuable lessons that day. The most important being that I should be responsible for my own kit, ensuring it was adequate for the planned route (and never to listen too much to big Stevie

) I invested thereafter in a good set of crampons. I gained the deepest respect for the Scottish Mountains on this day and realised how valuable life was. It was time for a celebration dram in Fort William. I bought Rab a drink for potentially being a life saver. 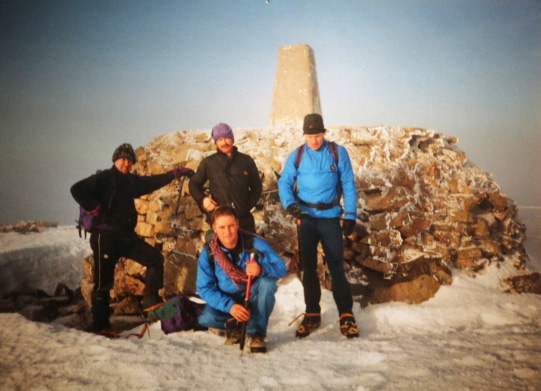