Bike through the Gaick: An Dun and Creag an Loch

Bike through the Gaick: An Dun and Creag an Loch

This route has been on my hit-list for ages. My wife is often working down in Aviemore/Kingussie, so it made sense to try and co-ordinate a day off with one of her days down there. With other things constantly cropping up, this took about 8 months!

gaick.gpx Open full screen  NB: Walkhighlands is not responsible for the accuracy of gpx files in users posts
Dave R also came along, so having dropped the other half off in Aviemore, we were ready to leave the parking area at Druimguish by 9.30. The lowest part of the private road up Glen Tromie is gravel, probably to deter the general public from using it. However it becomes tarmac after a very short distance, and remains so all the way to Loch an t-Seilich. The lower section is through pleasant mixed woodland and grazing, and is a lovely easy ride. For me though, disaster struck after about 3 miles, when I was suddenly levitating on thin air - my saddle had broken off! The bolt holding it on had sheared. The fitting was either designed with lightless or cheapness in mind, as it was rather flimsy looking. I’m guessing the latter, as this is the second time it has happened since December. Anyway, I decided that it wouldn’t ruin the day, so we continued with me sans saddle. 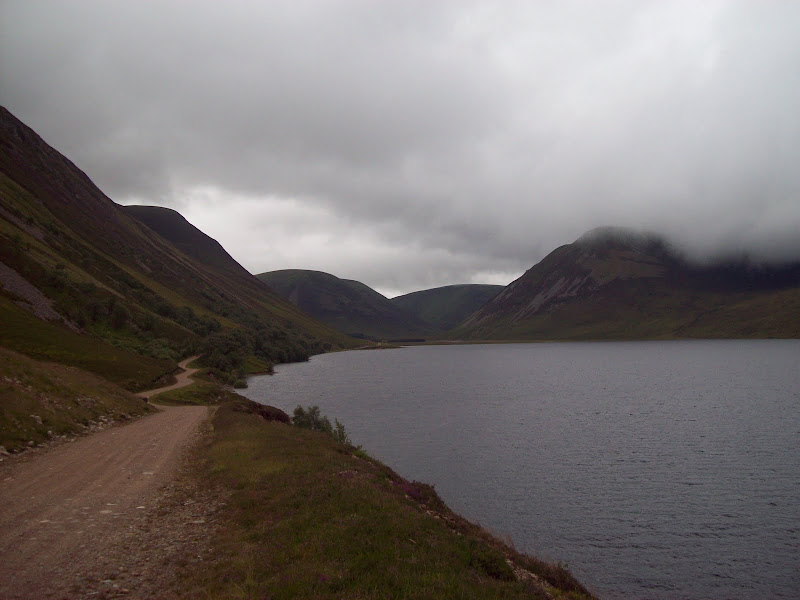 The glen opens up shortly after Lynaberack Lodge is passed, and becomes more bleak. Beyond the Minigaig path, the hills close in again and you are in the jaws of tthe Gaick Pass. We were getting the odd spits of rain, but on the whole the cloud appeared to be lifting from the hills. The track grew rougher after Gaick Lodge, and we got wet fording the Allt Gharbh Ghaig. The track disappeared briefly into a spread of stones at the south end of Loch Bhrodainn. On the other side it was rougher still, and getting rather sore on the hands to cycle standing up, so we left the bikes here. The ascent of Creag an Loch was rather quick, getting steeper and steeper before we hit the plateau. It was also much grassier than I was expecting.

N from the ascent of Creag an Loch, looking to Loch Bhrodainn and Loch an t-Seilich: 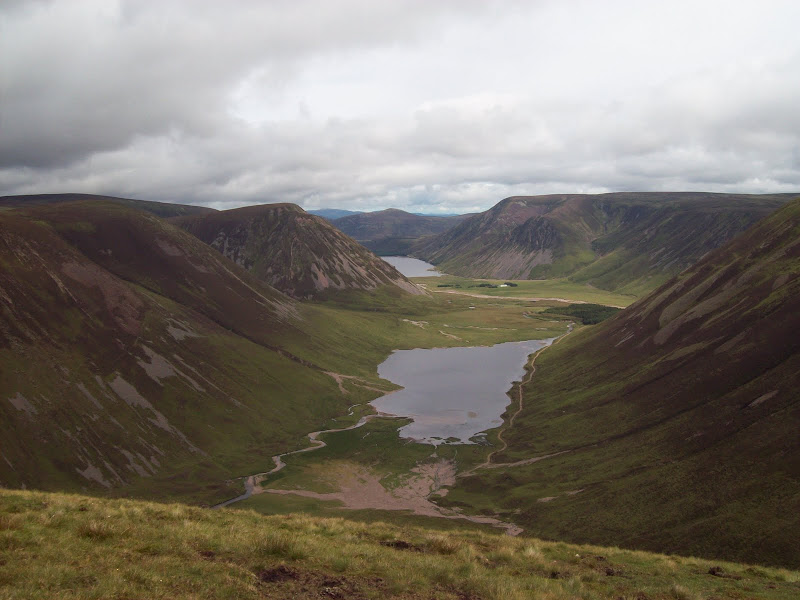 The summit was actually a pleasant viewpoint, for the further hills at least (the Gaick Pass being invisible from here). I was briefly confused, thinking I was looking down to the Linn of Dee and Braemar. It shortly became obvious I was looking down Glen Garry towards Beinn a Ghlo, Farragon Hill and Shiehallion! The summit cairn is absolutely tiny, although there is a bigger cairn on the Highland/ Perthsire boundary. Descending towards Sronphadruig Lodge, we soon met the edge of the cliffs for some of the much photographed views through the Gaick Pass. A path headed further this way, but we opted for a direct descent to the end of Loch an Dun. This was steep and a bit loose, but fairly straightforward. 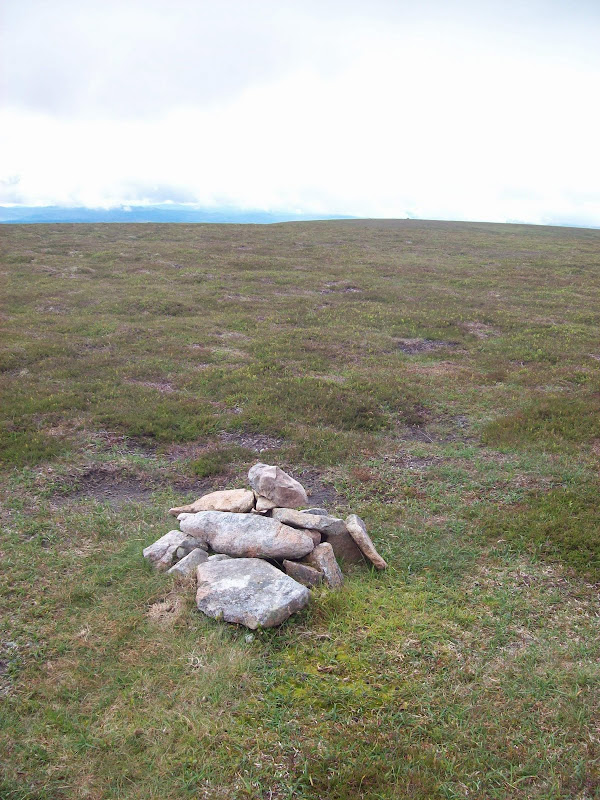 West to a’ Bhuidheanach Bheag, with a sliver of the An Dun plateau just visible: 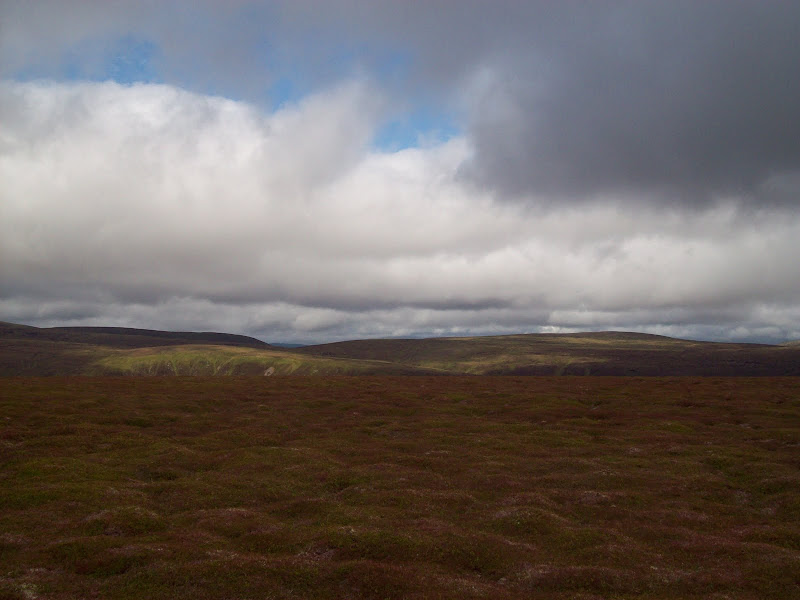 Loch an Dun from the descent: 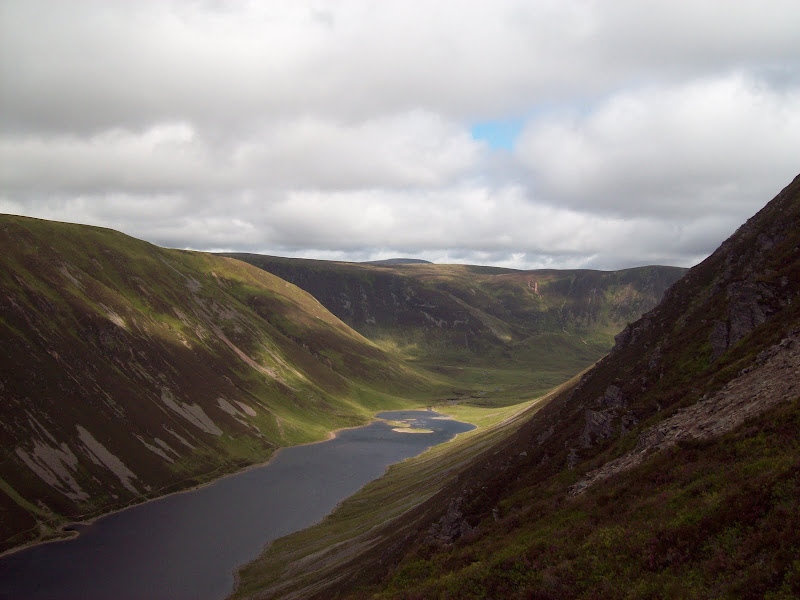 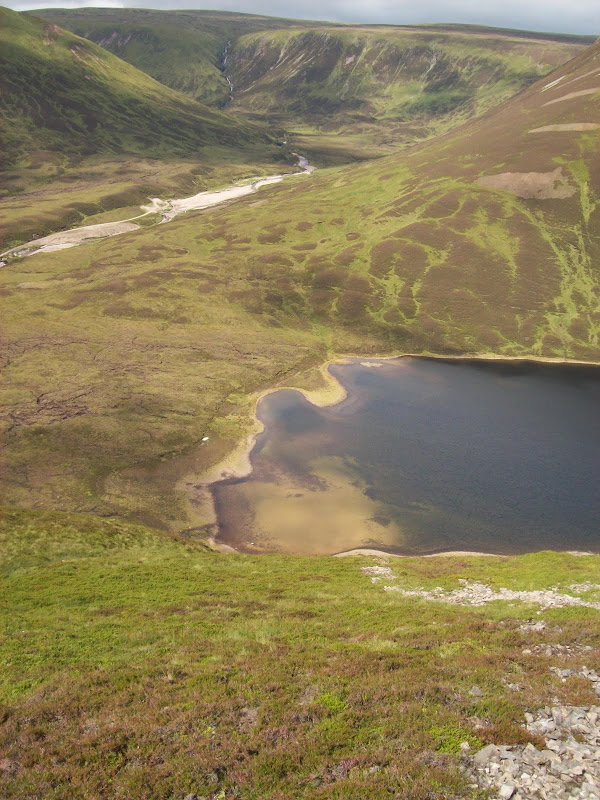 An Dun from descent: 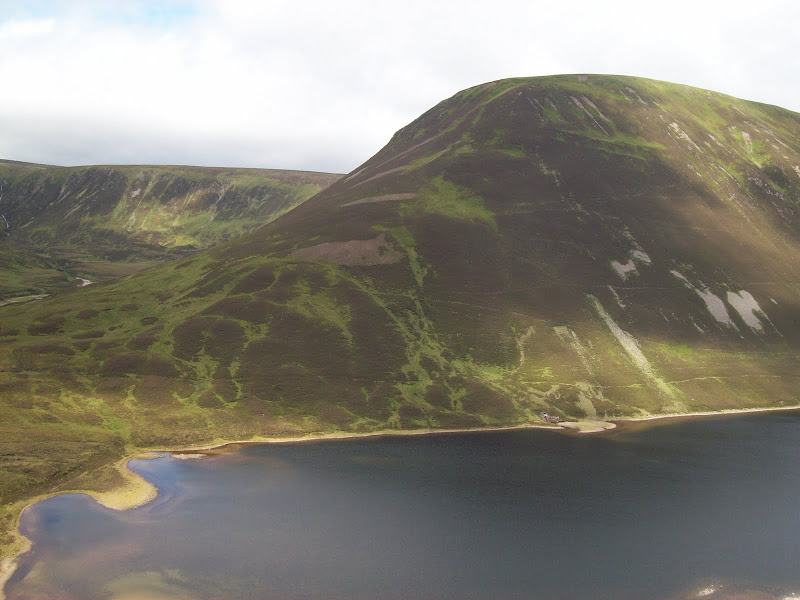 Dave on the descent: 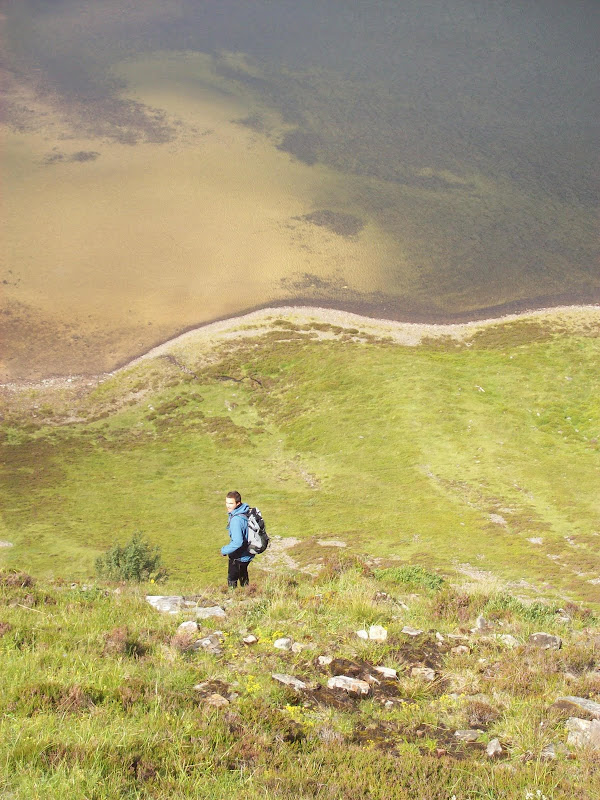 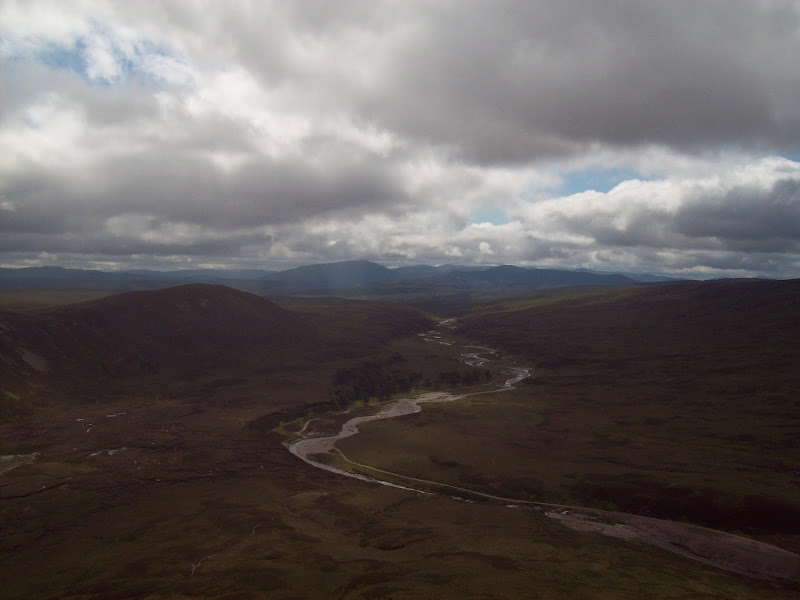 A spot of lunch by the loch and we were off up the slopes of An Dun. More heather than Creag an Loch, but other than that, the ascent was almost identical to that of the previous hill. The summit plateau was smaller than that of Creag an Loch, and good views were to be had from the edge, also to the massive expanse of peat to the west culminating in A’ Bhuidheanach Bheag. There were some interesting waterfalls in that direction too.

Loch an Dun from An Dun: 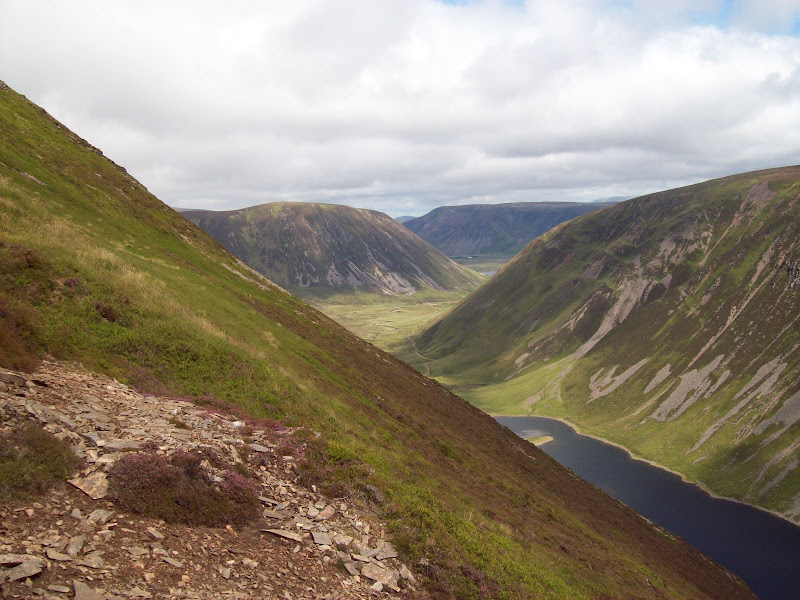 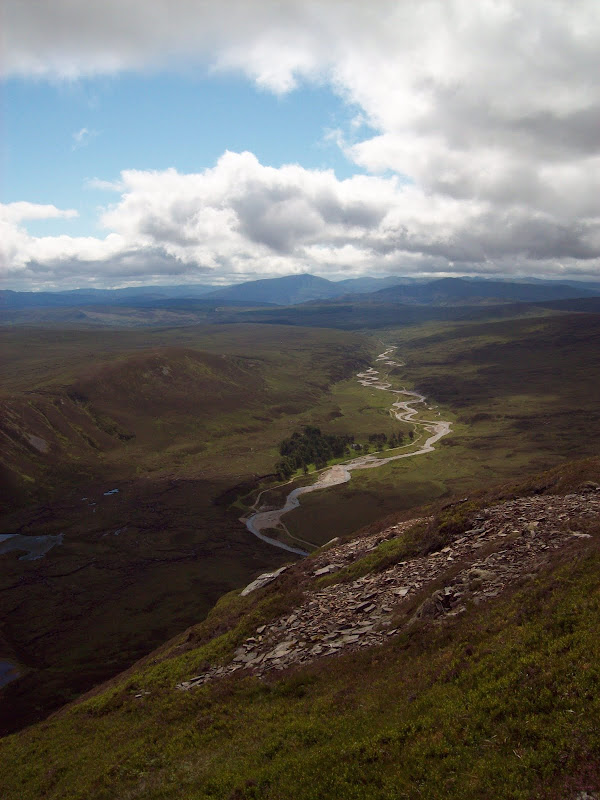 Across the shoulder of Creag an Loch to Farragon Hill and the rest of Perthshire: 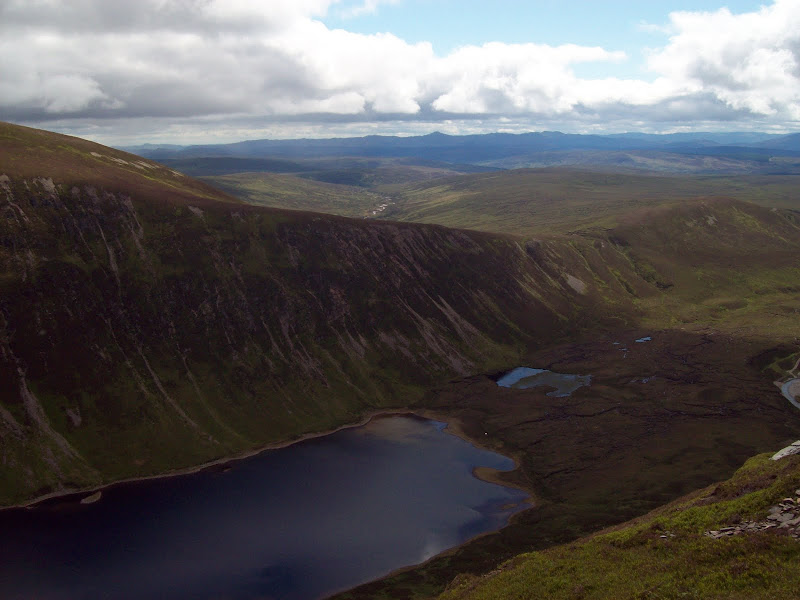 Creag an Loch and Loch an Dun: 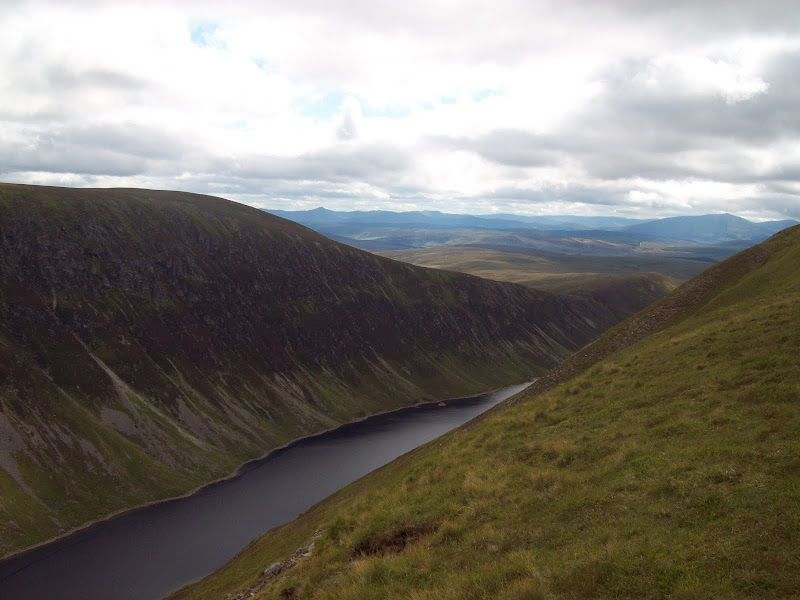 North through the Gaick again: 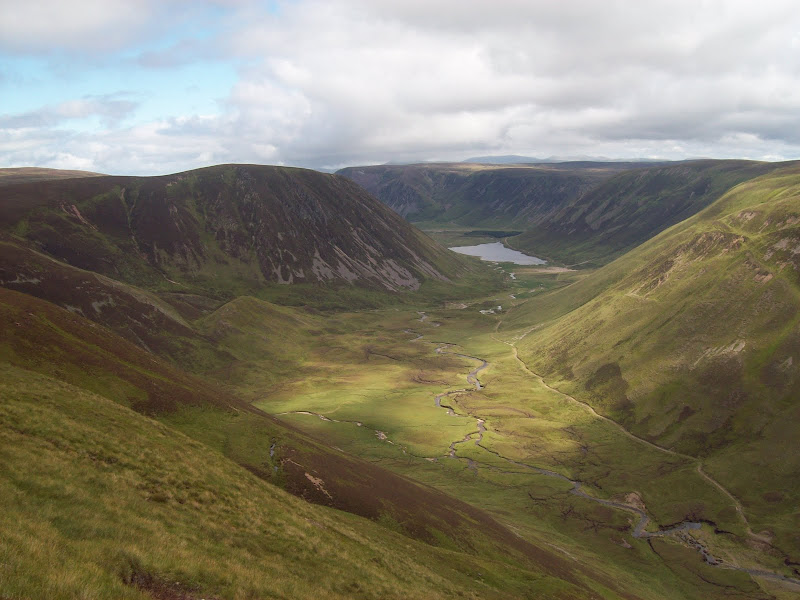 Another steep and direct descent to Loch an Dun avoided most of the boggy valley floor, and we were on the main track through the Gaick. This is more substantial than the map suggests, in fact the only remaining part of the pass that doesn’t have a vehicle track is the short stretch alongside Loch an Dun. 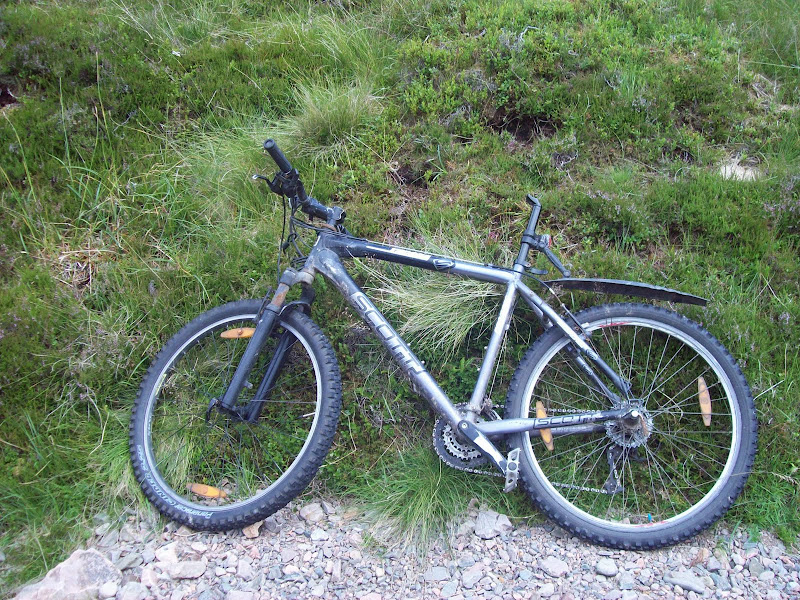 All that remained was a pedal back down the glen. I was quite relieved to reach the tarmac, as it was much easier on the wrists while standing up. We didn’t really hang around, and were back in Aviemore eating ice cream by 4pm. 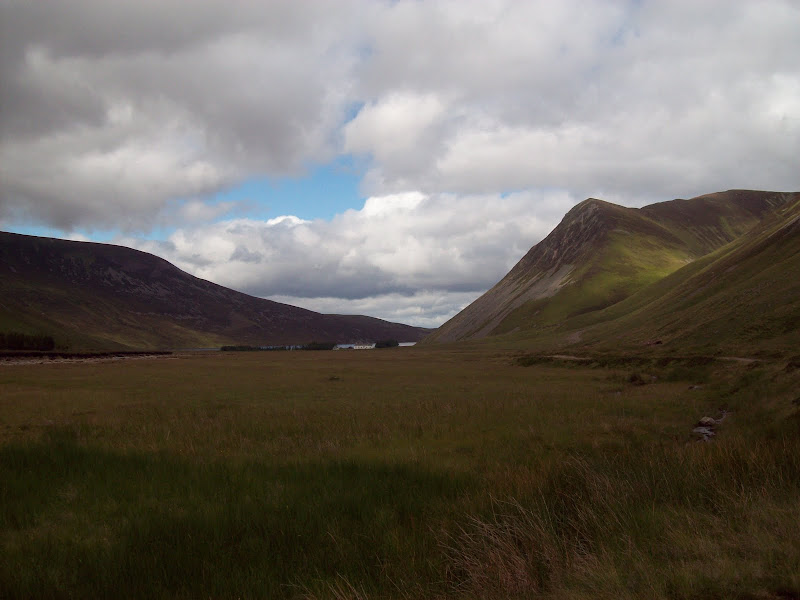 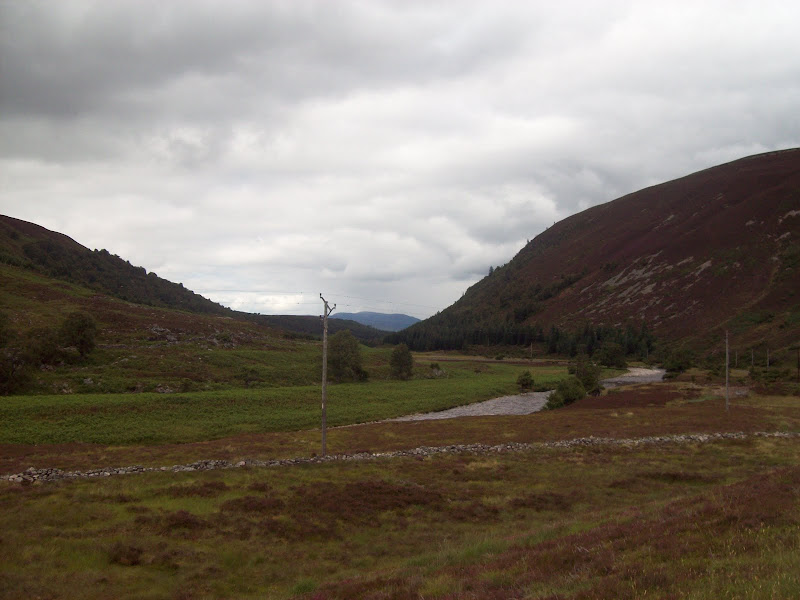 This approach is longer than the southern approach, but due to the tarmac road, it is probably just as easy. Glen Tromie is prettier too. I’d quite like to go right through the Gaick at some point, but due to the amount of road and track, probably by bike.

I had a great view up the Gaick pass from Beinn a' Chuallaich on the same day as you were there. Looking forward to a through-walk sometime

I don't ever think that I would walk through this 'cross over' but it is a natural to do on the velo. You choose such a painful way to travel on your two wheels that you probably missed out on the memorial close to the lodge.

Fine reminder images of this area. Cheers for the comments. Wasn't a particuarly long route - more of a bike ride with a shortish walk on the end.

You're right Gaffr, I missed that completely. I agree about cycling through - there is only a short section with no vehicle track, and even this looks like it would mainly be cyclable. I'll be back with the bike again - probably with a saddle next time though!

Some great pictures there Malky, Quite a distance as well. good effort