we did this walk last spring. it was a long one, the views were spectacular. route more less the same as showing in main description.
we left blackhope early in the morning moving up towards black craig. i must say i expected a better path, when it says 'faint path' i expect a path to be there, something to lead my eye and steps. that was first surprise of the day, the path.. well i would say there was plenty paths going around the hill but none going up. we decided to do a climb straight up on a very steep slope. it was steep, really, some places i used knees as well as hands.
anyway, after getting to the black craig i thought it was going to be only better.. and then i was surprised again- going thru the wet, grassy (and feather) plateau. ehh ;(
after reaching nether coomb craig the path appeared suddenly from nowhere and led us clearly up to hart fell. the ascent to hart fell was short and easy, just looked tought. then from hart fell we followed the path which dissapeared soon and did cross moorland shortcut to saddle yoke. from the other side of the ridge (swatte fell) it looked hudge, high and like a long walk, from hatfell rig it was just a little bump. i'm glad we decided to go further (we had couple of doubts after seeing saddle yoke for the first time, a mighty hill i would say) because getting to the top took just couple of minutes, was easy and i was actually surprised that we did it so quickly

descent from saddle yoke was very steep, killed my knees

all in all -we were lucky - weather stayed dry, windy and cold thou (we had to hide in a 'hole' to have some sandwiches and hot tea), we also 'met' a wee group of wild goats 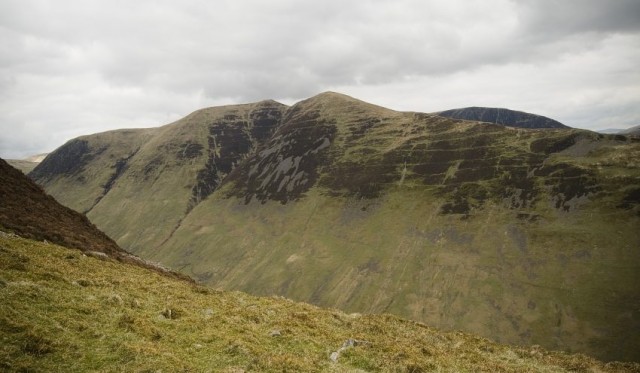