After much deliberation and conferring with fellow hikers on WTH forum I decided I’d try completing the Glas Maol Munro circuit with my mountain bike! As i love hiking and riding I thought it would be the best of both worlds. The fact that there is quite a bit of road walking on this walk had nothing to do with it!

After studying the walk report, Ordnance survey maps and a link a kind chap sent me over the forum, i thought once i was at the top of the first summit it would be great to be able to ride my bike over the grassy plateau between the Munro’s. The thought of being able to say that I’d achieved 4 Munros on my bike also had it's appeal. (thought I’d be in for some kudos from MTB chums you see!)

So, under a bright sky blue glorious summer day i set off after a massive breakfast from my superb stay at the Spittal of Glenshee hotel (top place), heading for the Glenshee Ski centre. After doing a reccy of the area yesterday when i bagged Carn Aosda and The Cairnwell i decided the best option would be to leave the car in the Ski centre car park and head down the Cairnwell pass to the parking lay by just under Creag Leacach. The walk report suggested reversing the route starting at the other end but i reckon its a steeper climb up the pass on the bike that way back and there didn’t appear to be a path marked as clearly on the OS map which i was counting on to be able to fly down on my bike at the end (the main reason for taking it up there in the first place if I’m honest. (I’m a sucker for a downhill trail!) 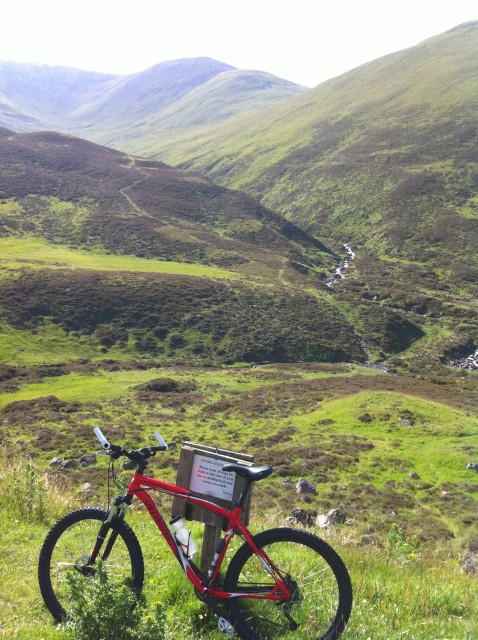 So, after hitting 40mph, winging my way down the pass to the car park on my bike, I picked the flies out of my teeth and bounced my way down the initial part of the track to the stream on my right. After continuing along the faint path which then disappears I crossed the stream and headed south up the grassy bank of Meall Gorm to the bealach at 715m. It was at this point where I started having slight doubts on whether bringing the bike was a good idea. Basically the grass was too long to push the bike through so I had to alternate carrying and dragging it. After 1.5 hrs just to reach the bealach I was knackered. My bike is quite light but not light enough to ascend 300m with a 30lb pack on your back as well. Anyway with what I thought was the summit of Carn Leacach staring at me 200 meters away I continued slowly up the hill, dragging the bike while puffing and panting like a bulldog that has just swallowed a bag of sand! After reaching the cairn to the south west of Carn Leacach's summit at 864m I realised I had forgotten to refill my hydration pack after using it for the 2 Munro’s the night before! Not Funny! With only a small flask of coffee in my pack and about 11 miles to go in the baking sunshine I turned the air blue for a bit before decided I was an arse but I’d be able to manage! Once you realise you have no water its amazing how much more thirsty you feel! You can escape down Glas Maol back to the ski centre if I got too dehydrated I told myself, pressing on. My next challenge was the stony summit of Creag Leacach.......with the bike. Far too rocky to ride over although I did try for a little until two walkers passed, eyeing me very strangely but politely keeping their opinions to themselves. However it didn’t take a genius to realise that they must have thought I was a right burke dragging my bike along!
Once they were out of sight I mounted the bike to negotiate the rocky crop on the north flank before hitting the bealach on the way to Glas Maol. So far 95% walking - 5% riding, carrying, dragging, whatever you want to call it Heading up Glas Maol wasn’t too difficult so I managed to ride the bike for around 20mins to the summit where a much needed coffee break was had. I did intend to have some lunch here with me being half way round the circuit but I was too thirsty to eat at this point. I quickly learned that coffee is no thirst quencher. After resisting the urge to beg a fellow walker I was chatting too to swap coffee for water, I rode off past quite a few other walkers down a track towards Cairn of Claise. Now this was the fun part. I was in my element bombing down the twisting fast flowing track. It was a great stretch of mountain biking! But unfortunately it was slightly overshadowed by the torture I went through getting the bike up there in the first place. After getting off to push due to fatigue and thirst at around 100m from the summit of Cairn of Claise I paused to take in the beauty of the Caanlochan Glen and the steep rocky flanks of Monega Hill. Quite a sight on a day like today! Eventually making the cairn, before heading over to bag Carn an Tuirc, I checked the map to become excited about heading down the clearly marked track to the bridge near the military road. Only trouble was I couldn’t see a clear track. Only a faint path through the heather which was too narrow to ride. After attempting it anyway I got about 50 metres before very nearly going over the handle bars! Forgetting to take water was bad enough, breaking my neck however would have been a bit of a bummer so I decided to take the safe option and push the bike down. Oh what fun that was. Now when your thirstier than Ghandi's flip flop, heading back along a stream and not drinking from it took some will power. After dunking my head under and cooling myself down a bit I mustered up the energy to make the bridge before the lay by off the A93. After desperatley trying to suck the lining moisture from my camelpak I set off for the slog up the pass back to the car park at Glenshee. 45 minutes to ride 1.5miles! What a killer! I am proud of the fact that I did not get off and push though. I think the thought of crawling into the toilets and trying to drown myself in the sink gave me the motivation to press on! Finally I reached the quenching taps of Glenshee Ski bogs! Halleluiah. 3 litres instantly downed and a good wash later I stared to feel human again. After settling back in to the car before my 4hr drive home a reached into my pack for some food……….only to find a bottle of unopened Highland spring water that I’d forgotten I’d packed! Unbelievable!!! Too say I was not amused with myself was an understatement!

In future I think I’ll stick to mountain bike trails with the bike and leave the Munro’s for my boots! Great day, beautiful area and a couple of valuable lessons learned! I went home happy in the end! A memorable way to bag my 30th Munro!

Your report certainly shows how different people are - I can manage most days with just my 0.3 litre flask of (black) coffee with perhaps a few mouthfuls of water if it's hot weather - I think the fact that the coffee is black must be the thirst quencher as I find it quenches any thirst I build up perfectly well - not sure white would do the same and sugary certainly won't as sugar makes you thirsty! Failing that quenching my thirst, I would certainly drink out of mountain streams - but cooling yourself externally works quite well on a hot day too... If you carry a buff or thin type of hat, try soaking that in a stream and putting it back on.

But no way on earth could I carry my bike more than a few yards - certainly not over boulders or up a mountain! Good effort!

Don't know if you're crazy or just a bit thick

But I love it, well done dude.

Was hoping you'd write this up. Looks interesting, although I doubt I'd ever try it! At least you have confirmed that the only practical bike approach for these hills is from Glen Isla!

I cycled to the top of Mount keen from Glen Mark, and except for the very top bit (100m or so of Boulders) it was absolutely fine. I wouldn't have managed these though

Thanks for your comments everyone. I had to try it! And yes I think I am definitely a bit thick! Lol .

I'm well impressed you even thought about taking the bike up a hill, although i can see the fun in going downhill after that slog!! I was up there in the snow and thought it might look a bit ugly in summer but your photos are great.
I love your water story - too funny, and sounds like something i'm capable of doing, in fact i did something very similar recently involving a map!!

I'm with malky_c
Thought you might use Monega Pass road from Glen Isla and do the middle four that include Tom Buidhe and Tolmount which seem more suited to biking (not that I'd know). As it is you are clearly daft as a brush with a great sense of adventure and a great report/piccies

That about sums me up! lol

Think i'll atempt the Monega Pass route for the other two next time. I'll look forward to that as the views from that direction look awesome.