Driving along the B976, I saw a good clear view of the next day's objective:

I parked at the entrance to the track to Charr. There was a sign about not blocking the gateway. The entrance was wide and I parked well to the side. After transferring kit between my daypack and big pack, I headed off. After a short distance, I came across a sign about adders. 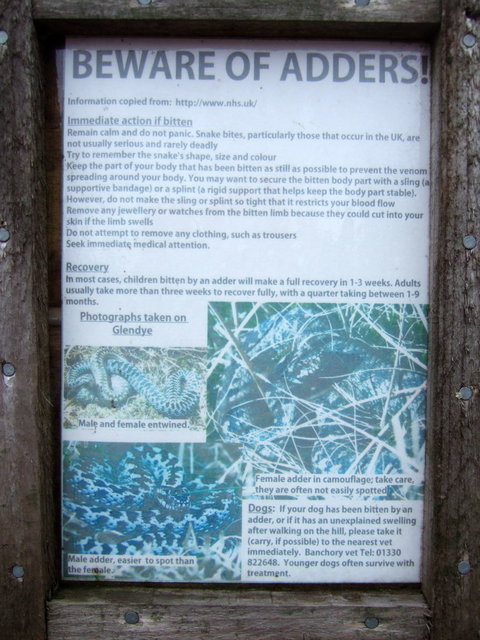 I had considered cycling to the bothy but at 4 km, it did not seem worth putting my bike into the car and assembling it on arrival. It was an easy walk along a good track. I would also have been an easy bike ride. It was raining and there were a couple of bursts of thunder. It was that sort of rain where one considers putting on waterproofs but I pushed on, arriving at the bothy only a little damp. I arrived to see the door below and I began to think that maybe the bothy was closed during the lambing. I was faced with having to walk back out to the car and sleep in the back of the car, something I've not done for many years! Walking round to the other side of the bothy, I found the door which was unlocked. I was instantly struck by how clean the bothy looked. No spent matches and candle wax. This (perhaps along with Ryvoan) was the cleanest bothy I had visited. I was aware that the fire place had been blocked off, but the building was totally draft free and once the stove had got going, was reasonably warm. With no fire to stoke and fading light, I hit the sack at around 2100. I slept well but was awake and feeling hungry at around 0630. However, I could not find my porridge. I remembered sorting out four packets of porridge, but with everything pulled out of my rucksack, there was no porridge

, so breakfast consisted of half a sachet of Ovaltine and a Twix! On my return home, I found the porridge on a bookshelf!

It was a perfect morning with just a bit of cloud way to the east. I took the opportunity to take a few photos of the bothy. It was still early and I was taking my time, so I read the poem below. It was a little difficult to read the author, but I think it said Tom McKay fae Brechin.

Hillwalkers are a funny breed,
For starters, they're a' off the heid,
They shy at walking up the town,
Yet roam the hills without a frown.

They say the High Street's far too steep,
Yet climb Munros without a cheap,
And carry a heavy pack,
Up places like Mount Keen and back.

Through swirling mist they'll walk for 'oors,
O'er heather hills and grassy moors,
Half the time they don't know whether,
They're on the path or in the heather.

Occasionally they'll get some cheer,
Maybe see a herd o' deer,
Other times wet and wabbit,
They dinno even see a rabbit.

They'll hobble on wi' blistered feet,
Through freezing cold and searing heat,
Some may think this proves they've guts,
Others think they're just plain nuts.

When they stagger home, dead beat,
First thing they do is steep their feet,
They'll fall asleep just where they sit,
Too tired to sort out their kit.

Next morning, all stiff and sore,
They swear their walking days are o'er,
But come next week, they're off again,
​Oblivious of last week's pain.

I set off along the good track a little after 0800. When I first saw Mount Battock, I could see that there was a fresh sprinkling of snow on its summit. I could have followed the track all the way to the top of the ridge ridge connecting Mount Battock to Clachnaben but I followed a path up to some grouse butts. These can just be seen in the photo above. This was a more direct route but the path petered out and there was a bit of peat hag to cross. Overall, I probably chose the best option.

​I had expected to be the first to the top of the hill but found a man on the summit ahead of me. He had walked up from Glen Esk.

It was beautifully clear for some summit selfies and photographs of distant hills: 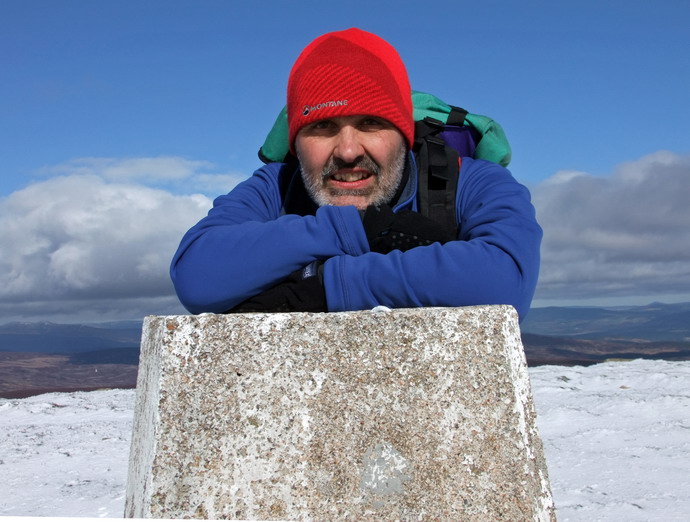 I was particularly interested in the view of Morven to the north-west as it was my target for the next day. The actual summit looked quite wintry with ice breaking off the wires of the fence creating tinkling sounds. Heading off the hill, I passed a couple of guys who had cycled up Glen Dye. I asked if they had parked next to a silver Ford Focus. The one said that he didn't see it while the other one made a comment (with a smile) about it having smashed windows (ha ha ha - very funny!). [I thought about adding a laughing smiley but smileys do not convey sarcasm]

The descent was easy and quick and I could see the way ahead - a very clear track all the way to Clachnaben. While, I did not see any motorised transport; just a trailer used to transport water up to the high class bothy half-way along the ridge. There was even road signs and a cone! Perhaps I should have stood and waited for the next bus! Periodically, I would look back at Mount Battock. I chatted to a nice senior gentleman from Aberdeen for a while. I was to meet him again at the bottom of Clachnaben. He was returning to the Clachnaben car park via GlenDye.

I was feeling a little tired and weak. I'd had a mild headache that was slowly getting worse. Perhaps caused by a lack of porridge?

​However, I pushed on and it was not long before I reached the trig point and tor of Clachnaben. A group of five arrived a little later but we did not exchange words; just glances. There is a well built path down from Clachnaben and then a good track to follow over the shoulder of Netty Hill back to the bothy for couscous and Morrocan tuna and pasta salad. The combination worked well. I wrote an outline of my walk in the bothy book and was in my sleeping bag by about 1900! I was up at first light the next morning and was out collecting water when, noticing the beautiful sky, I rushed back into the bothy for my camera. Red sky in the morning, shepherd's warning - see my report for Morven! On the walk back to the car, an estate vehicle stopped. It was a guy from Selby that I had spoken to two evenings earlier. He asked me how I had got on and said that he had a "funny story" to share. It seems that when he had arrived at the entrance to the track, there was a policeman looking at my car. Apparently someone had phoned the police saying that my car had been there for a week. He put the officer straight, saying that an "old boy" had walked up to Charr and was staying there for a couple of nights. The policeman asked that I called into Banchory police station next time to inform them of my plans.

I once had a similar experience many years ago while staying at Essan (Loch Eilt). A police car arrived while I was removing my boots. Apparently, an ambulance crew had reported the car as being parked for a couple of nights. The policeman asked me to let them know of my plans next time. This I did, but the desk Sergeant's response was "Why are you telling us?". Being called out to an "abandoned" car is a waste of their time and calling into a police station to tell them of my plans is wasting their time! I am inclined not to leave a message on my windscreen as it tells villains that I will not be back for a while! No simple answer here - whatever I do will be wrong!

As for adders, I saw a dead one on my walk out from the bothy. It had been ran over. It looked like quite a fresh kill as it had not been eaten by scavengers and kicking it over revealed pink guts that showed little signs of decomposition. They have far more to fear from us!

I look forward to reading the walk report and seeing the photos. Also interested to see how you negotiated the forestry plantation.

That is a seriously good sunrise, wow!

I'll need to get up there some time. Relatively local with a good path means I can get the wife along too. This and Corryhabbie on the agenda now.