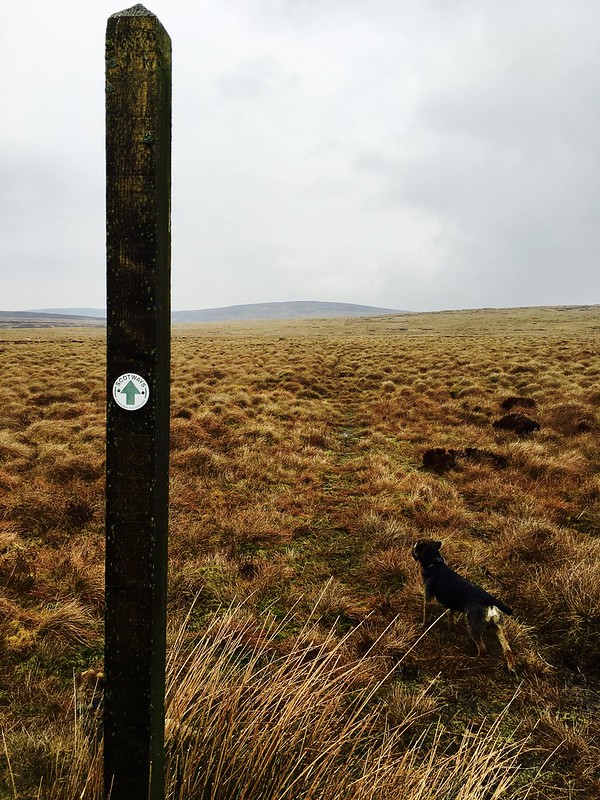 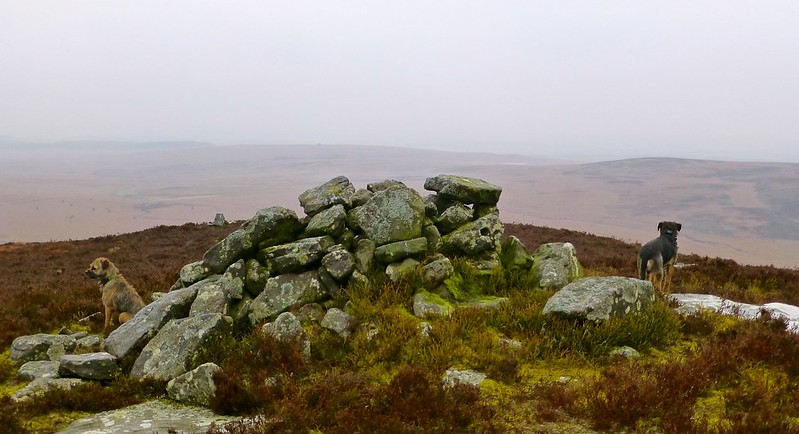 Another route borrowed from Rab Anderson’s book ‘The Pentland Hills’. (Retrospectively logging these trip reports, I'm beginning to feel like his agent

It turned out to be a dreich day of incessant drizzle. One of those mornings when you consider stopping to take the camera out of the rucksack. And then think feck it just as quickly.

The start/finish point is the same as that for Dunsyre Hill - a small lay-by midway between Dunsyre village and Easton Farm. It's pleasant enough going on the road, and later the track, to Easton. It's good to leave the farm behind though - the ground at the rear is badly pitted and pocked by livestock.

The main track turns sharp left (west) behind a green bothy. A less distinct trod carries straight on through the heather bearing south. I followed the trod but it petered out a short distance later.

Tracking east across rough moorland I then picked up a series of wooden way markers that took me south to the foot of Cairn Knowe. Because of the weather, I hadn't taken the map out till then. Nor had I double-checked my route print. Unbeknown to me the main track cut sharply south just after I left it and had been about 100 yards away the whole time

You live and learn I guess.

i crossed some gorse to rejoin it. Small Dog almost walked into a hare. It was bigger than her. They stared at each other for a second. Neurons fizzed in the air. Who was the hunter? Who was the hunted? The hare ambled off. Big Dog had no reservations. He chased it. The hare went up through the gears and took off like sports car.

From there it was a steady plod along the track westwards towards Bleak Law. I left the track for an easy walk to the summit. There are 2 stone cairns at the top but there was little else to see by way of views. (As it happens, I was stood on the same spot a month later during a circuit to Darlees Rig. Visibility was much better an it proved to be a good vantage point.)

Dropping off to the west, we passed between Mid Hill and Green Side and through a gate. We then followed another set of wooden way markers to the table top hill that is Left Law. It was marshy plod with plenty bog traps to soak the feet. On the way, I found a black thermos flask; presumably dropped by a shepherd or other walker. This area feels remote and I suspect visitors are few - it could have been there for weeks I suppose.

It was south to Little Sparta thereafter. I like this place very much. But all of the exhibits there were covered for the winter. It's hard to tell if anyone lives there off-season.

An easterly road walk back to the car to finish. I'm a fan of old churches and had intended to visit the one at Dunsyre. Unfortunately it seems to have been sold off for use as a private home. The pics in this report were taken on my iPhone.

If anyone's interested in Little Sparta and the man who inspired it, opening times and dates, entrance fee etc more can be found here:
http://www.littlesparta.org.uk

The wife and I visited in September 2015. It's quirky but we enjoyed it.