Mungrisedale Common - it's not so bad!

Mungrisedale Common - it's not so bad!

Mungrisedale Common.gpx Open full screen  NB: Walkhighlands is not responsible for the accuracy of gpx files in users posts

Weather forecast wasn't good, and no-one else wanted to walk with me, so I decided to get Mungrisedale Common "out of the way". It's one I've been putting off as Wainwright's description of it is so off-putting - indeed, I think it put me off the whole of the Northern Fells, which is a shame as all the other ones I have climbed this week have been lovely.

I decided to park near Scales and ascend via Mousethwaite Col, taking in Bannerdale Crags on the way. 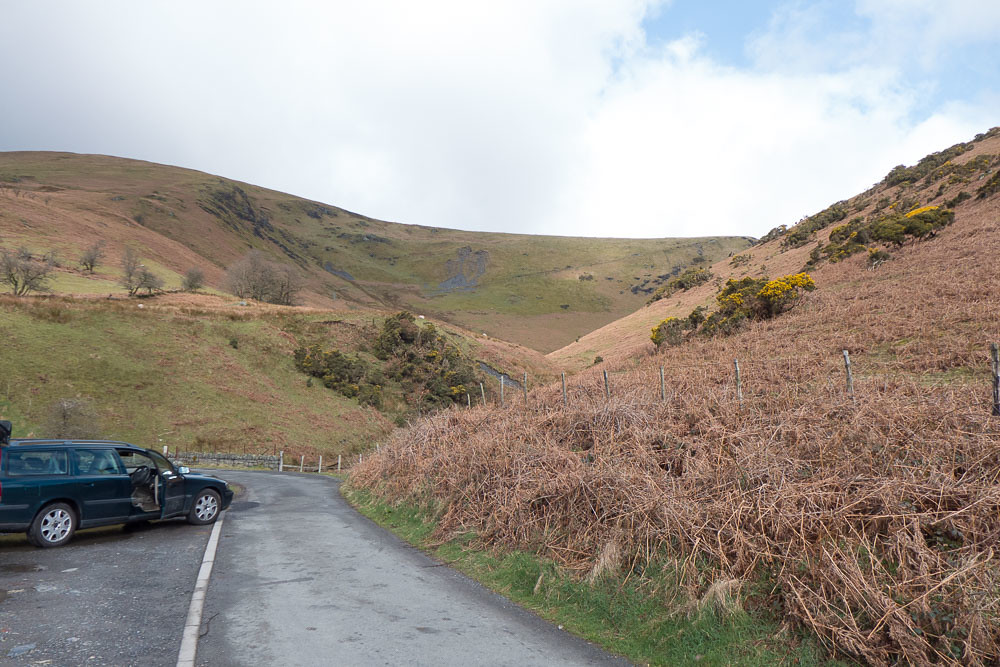 A sign on the gate leading to Mousethwaite Col warned that the footbridge I had planned to use on my route to Bannerdale Crags had been washed away in the winter floods - but Wainwright seemed to suggest that there was another path across the stream a little way downstream, so I decided to hope for the best. 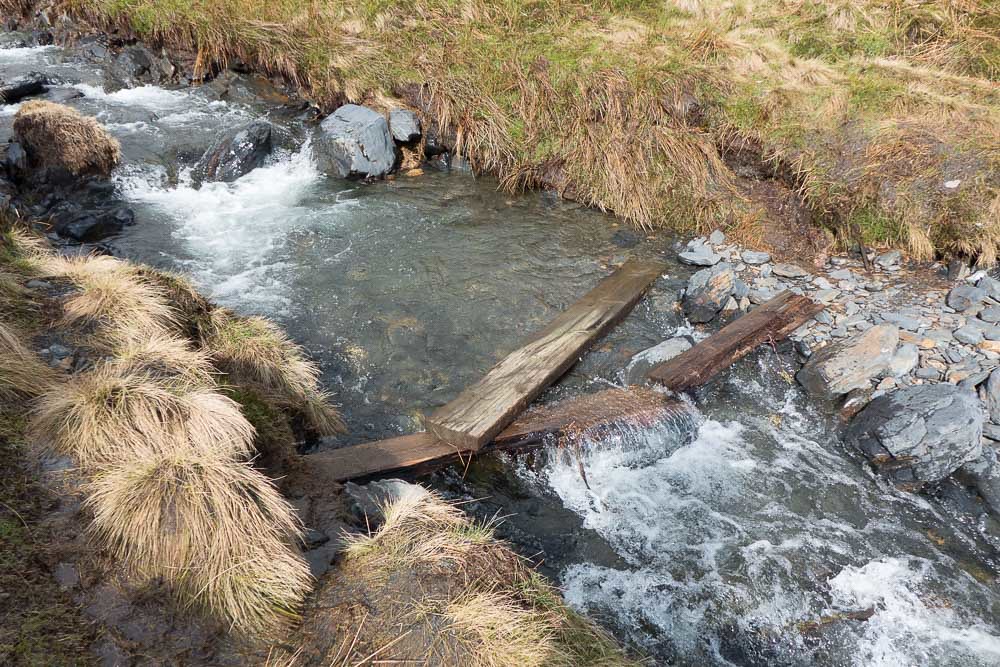 What's left of the footbridge

As it turned out I couldn't locate the Wainwright alternative, but the river was crossable at the site of the missing footbridge thanks to a few well-placed planks

One reason for selecting the route I had up Bannerdale Crags was that Wainwright promised unique views of Blencathra and Sharp Edge.

I couldn't find the path promised, so ended up making my own way up to the ridge, pausing every so often to photograph Sharp Edge. 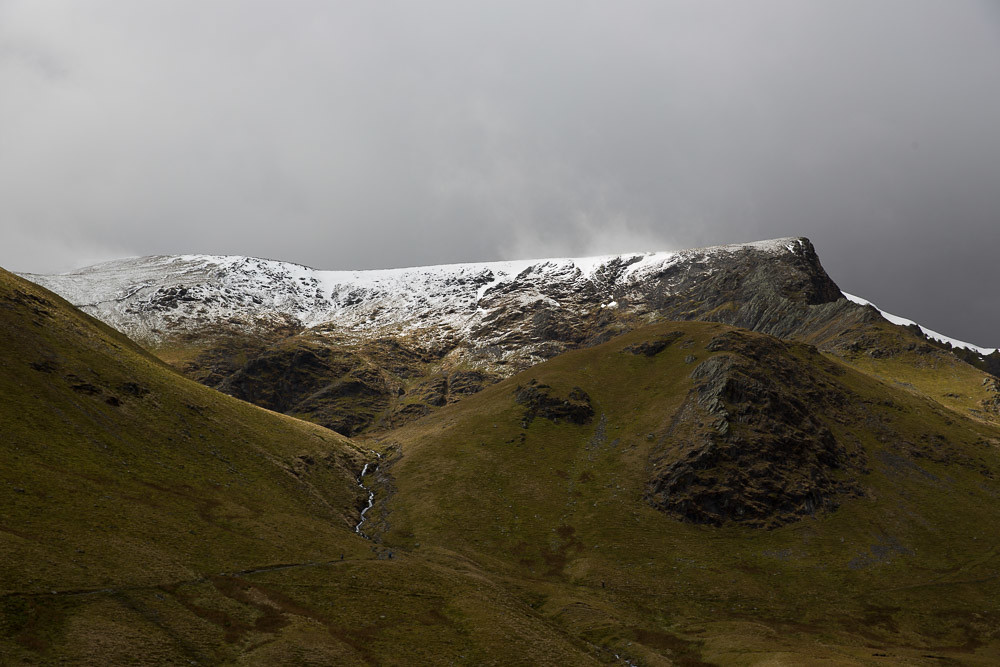 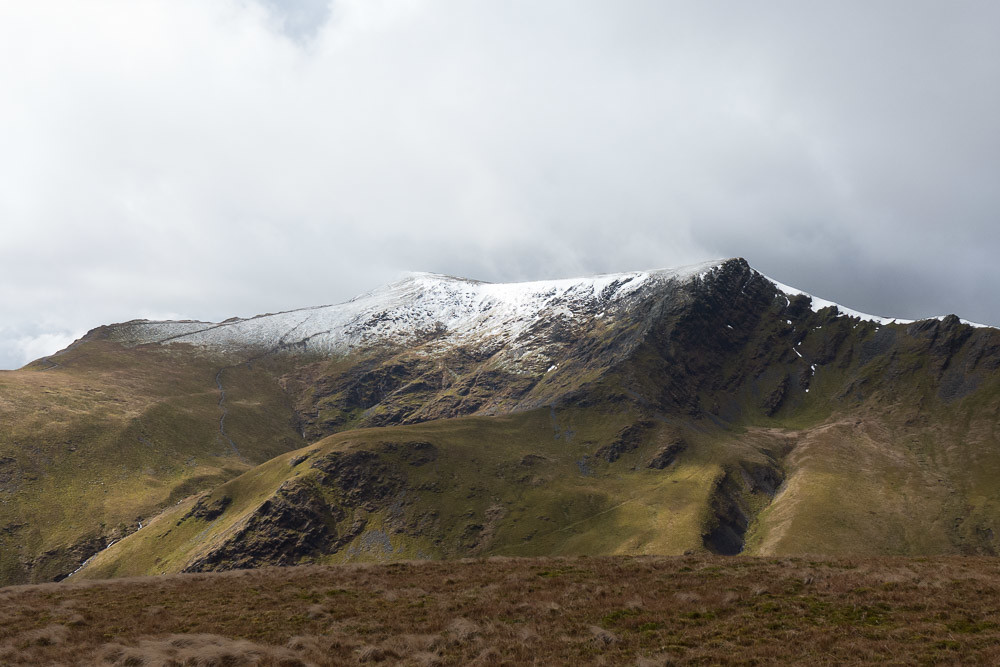 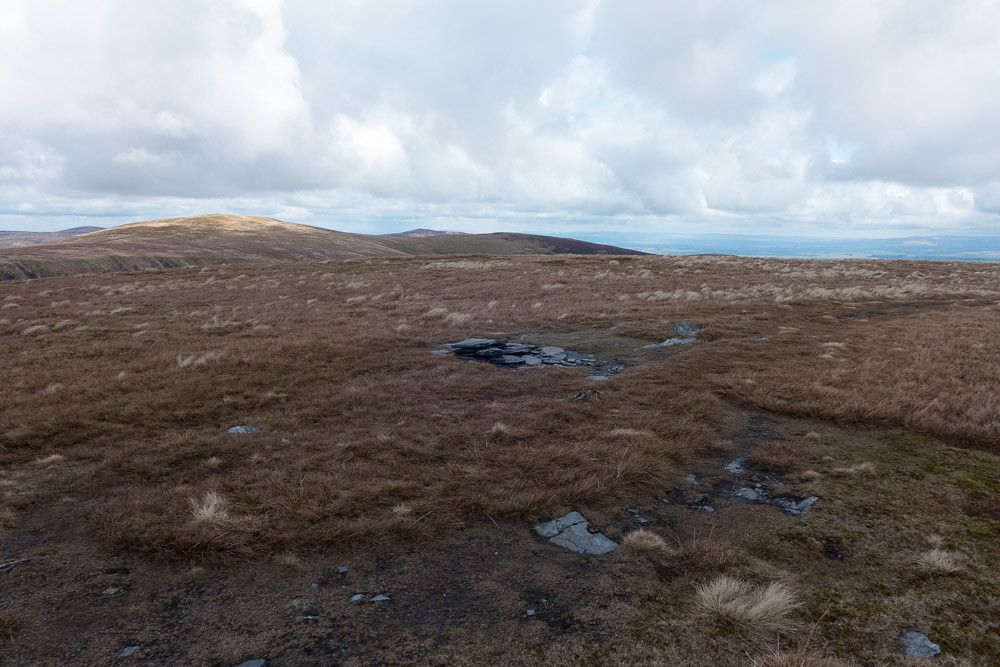 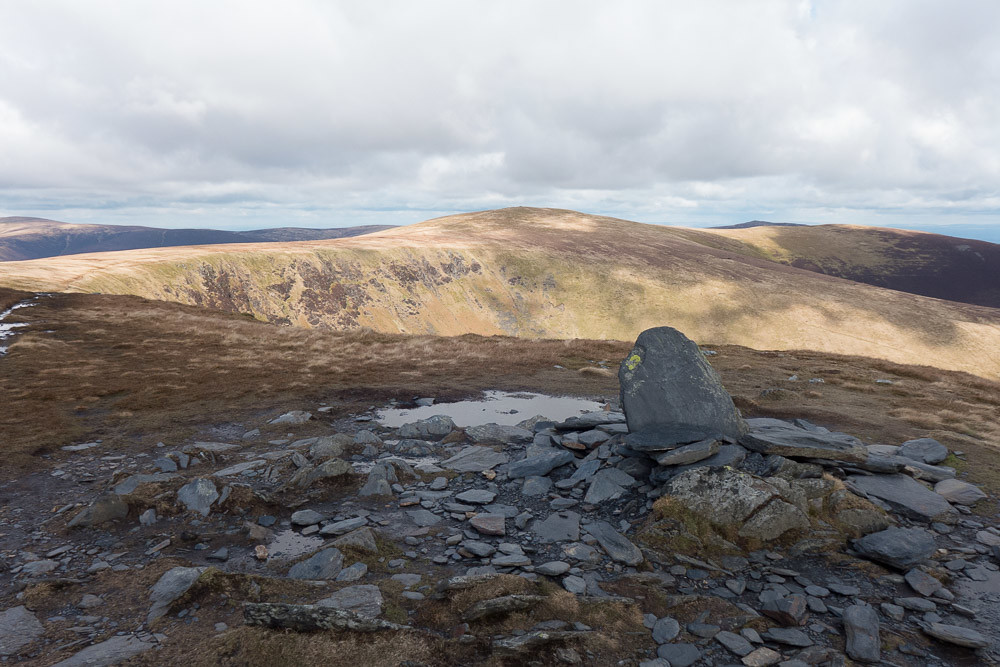 The true summit has the advantage of a great view of Blencathra though. 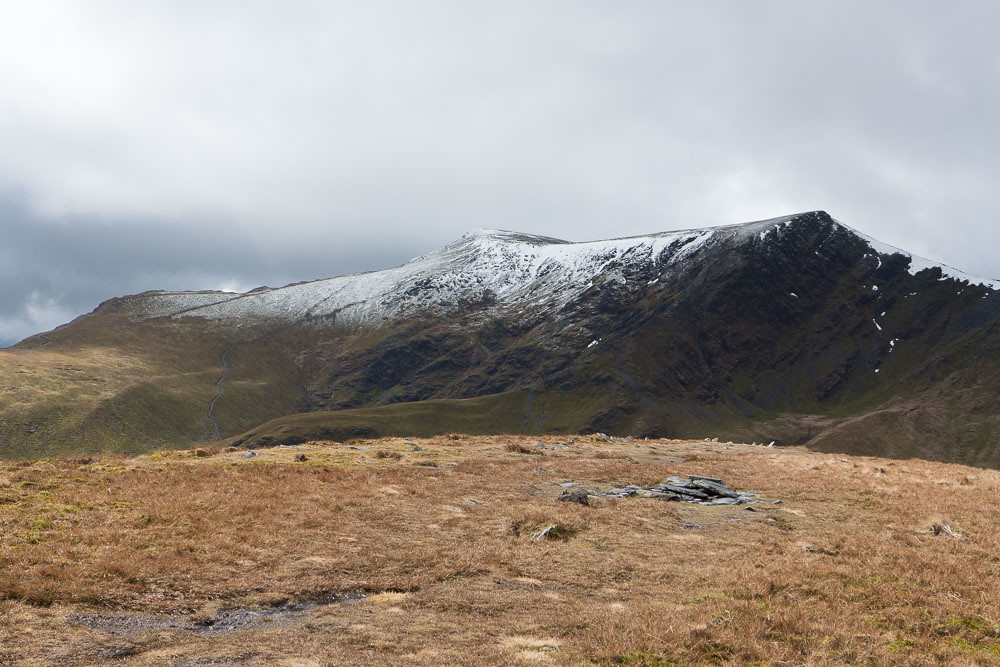 I decided to delay the inevitable journey to Mungrisedale Common by heading first to Bowscale Fell - the path follows the top of the crags to avoid the bogs. 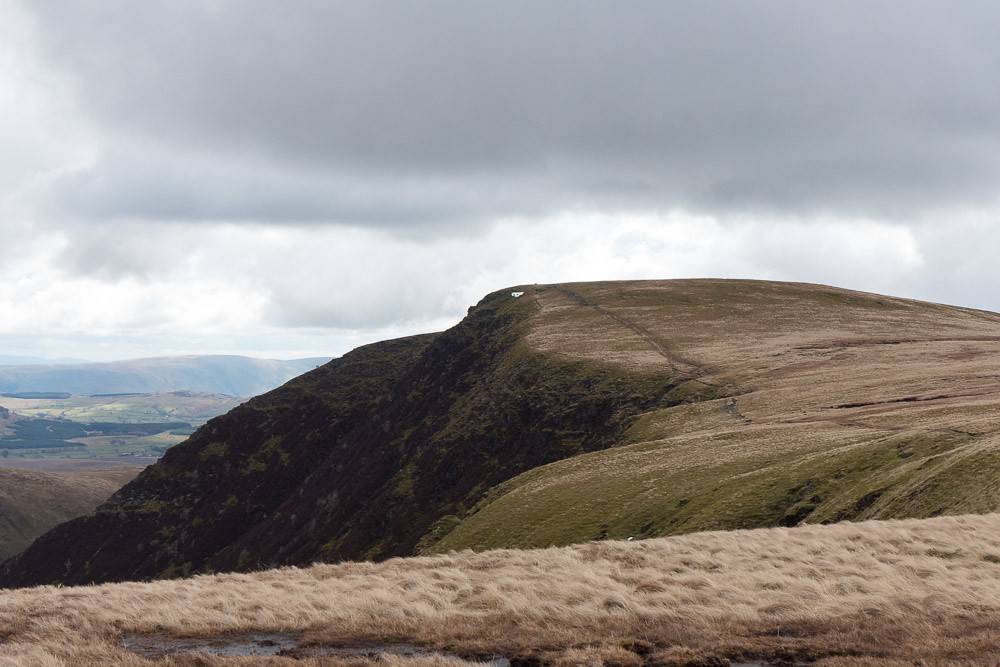 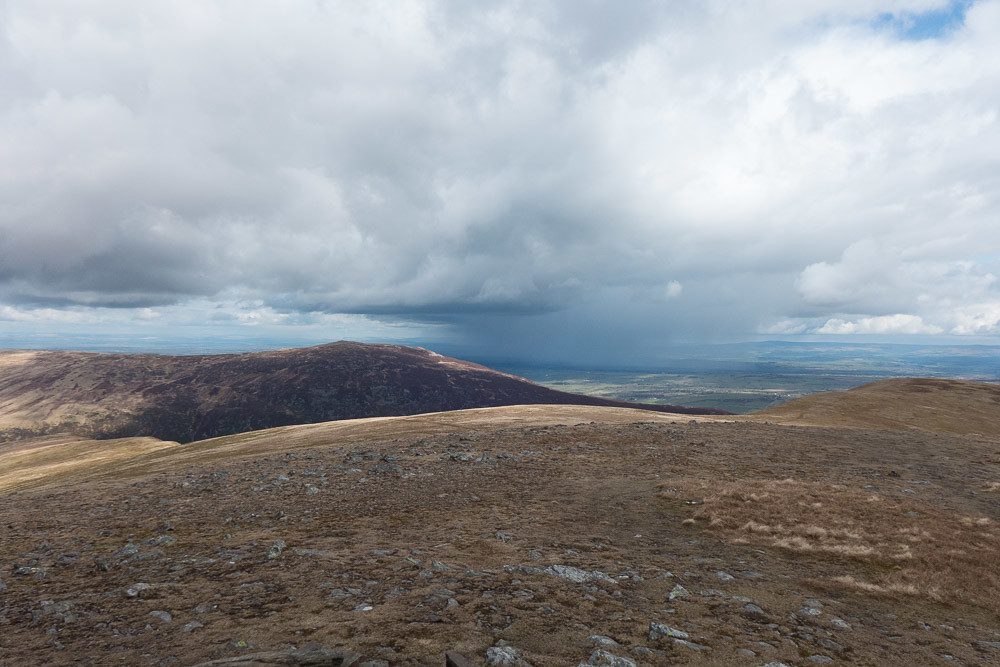 From Bowscale Fell it was down to Glenderamackin Col, then over to the common. Depsite Wainwright's descriptions, there was a clear path all the way - evan a cairn marking where to turn off. 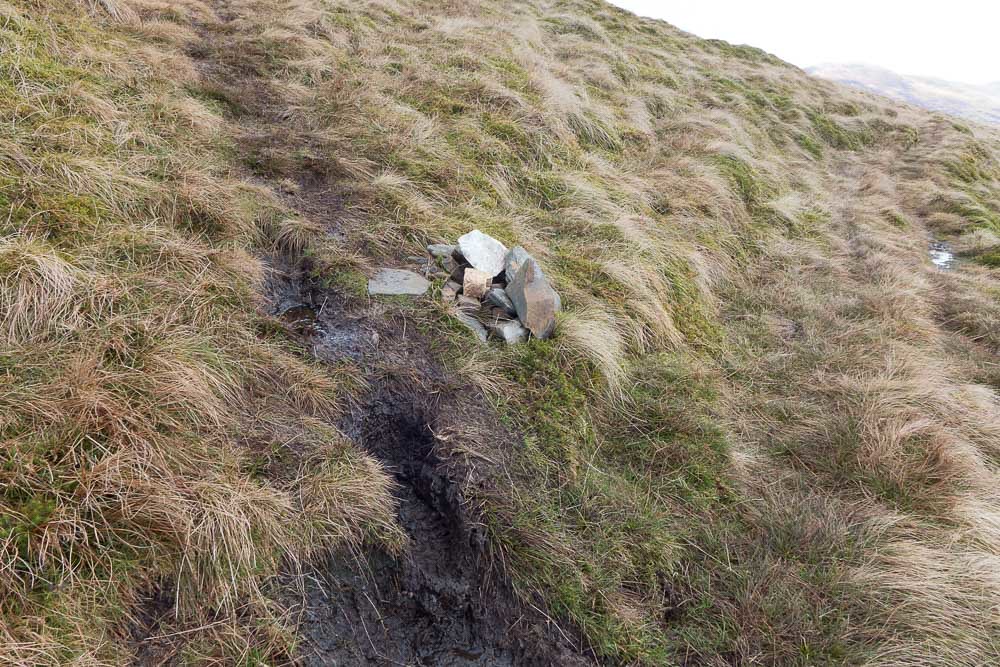 It's a fairly dull tramp over wet ground to the summit. 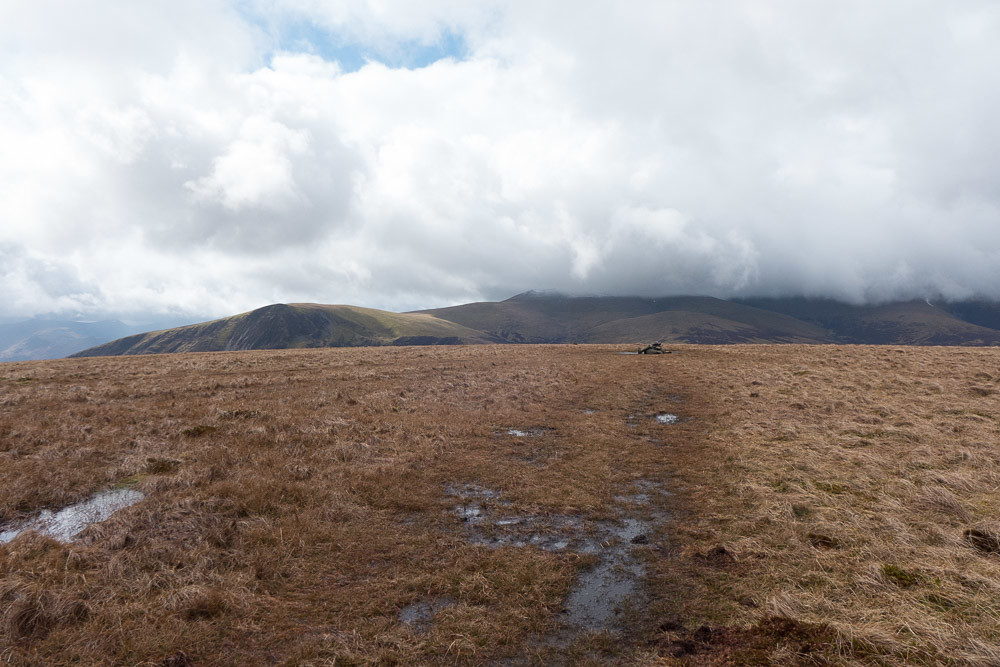 But while it's never going to be my favourite fell, it's has quite a few features of note (some no doubt gained since Wainwright described it)

It has a tarn. And a summit cairn. Indeed, they are neatly combined into a single feature: 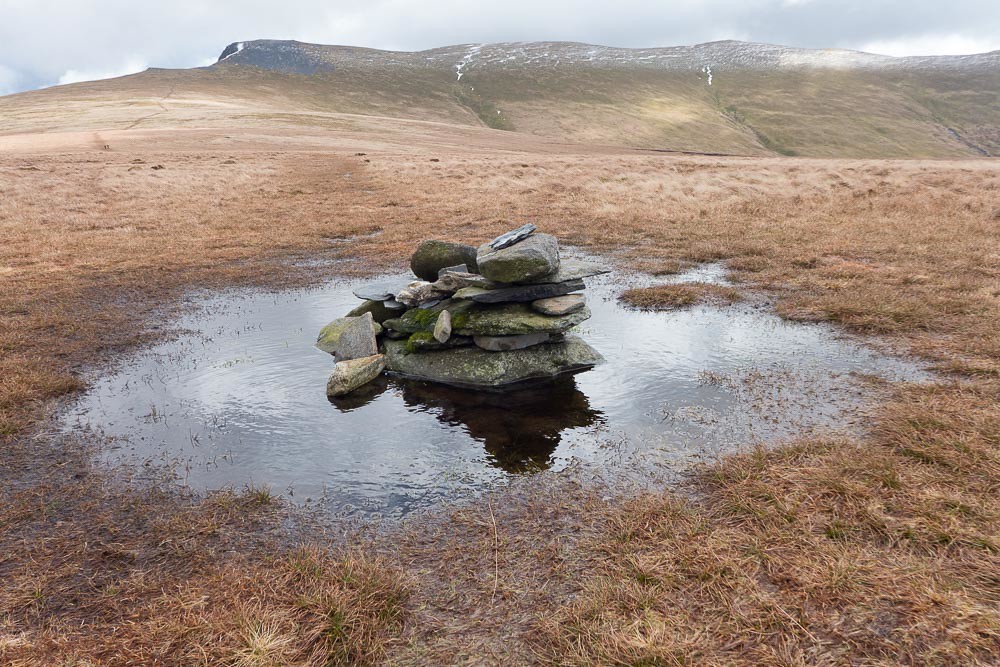 A tarn with a cairn

It has paths. Leading in every direction of the compass, all converging at the summit cairn. 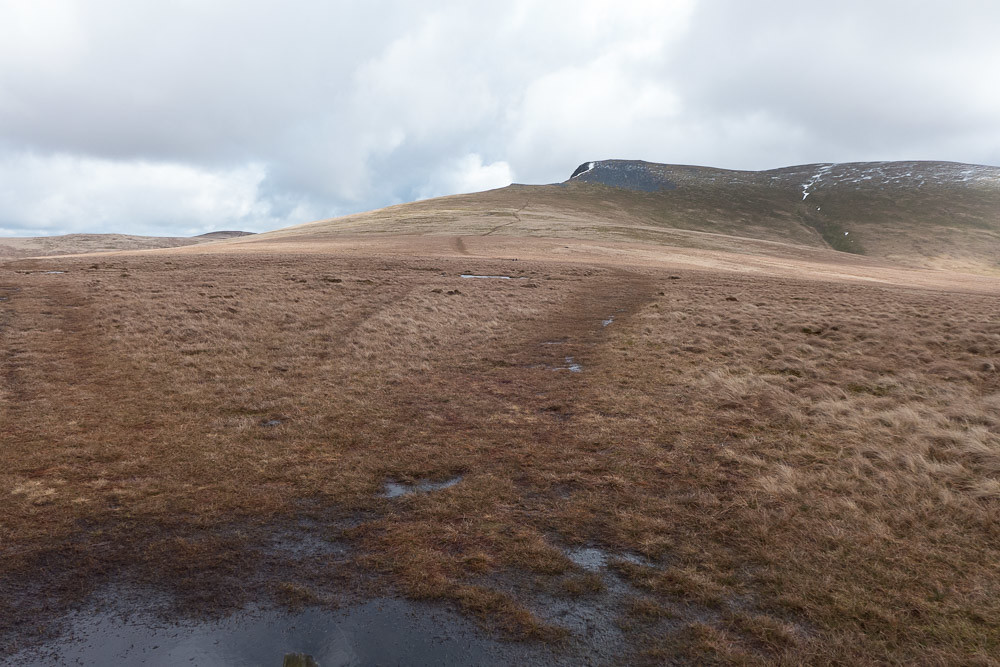 Paths in all directions 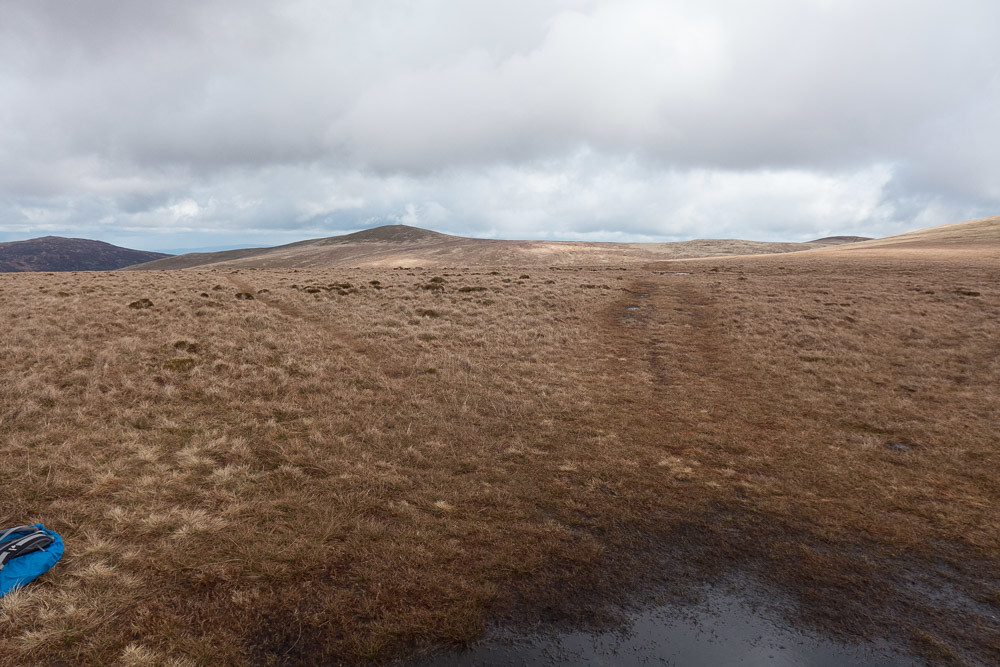 Paths in all directions

It has a view of the sea 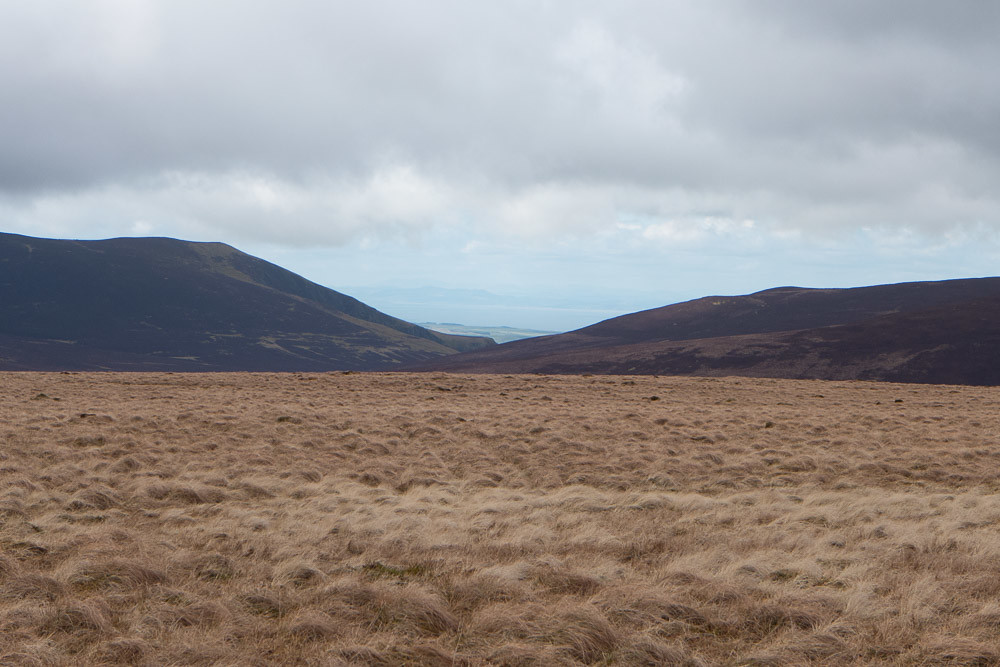 It has a view of a lake 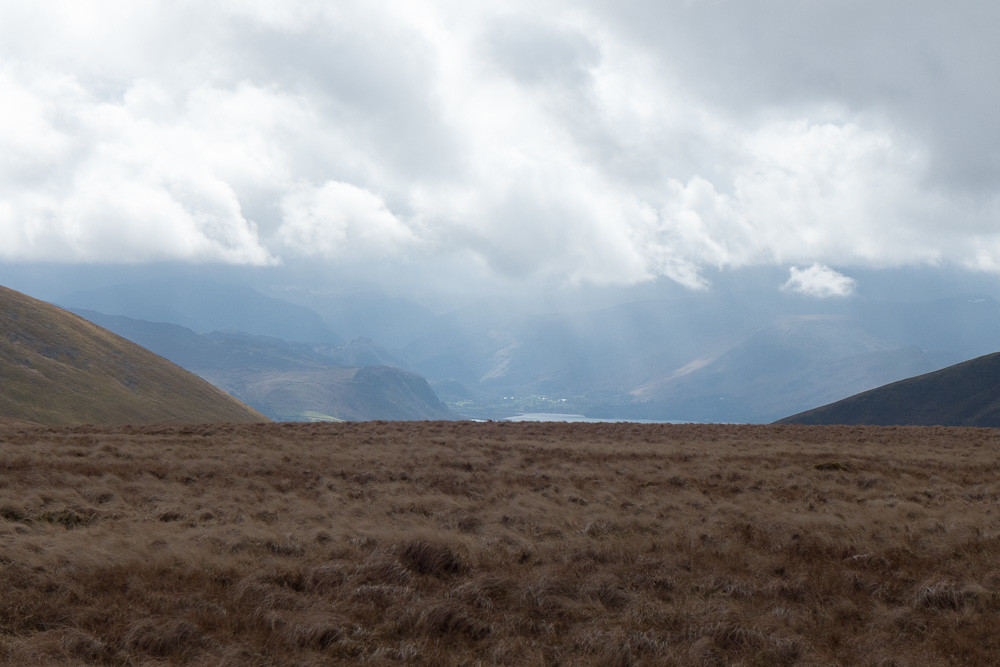 And lastly but, I think, uniquely, it's the only fell I can remember climbing where (as near as makes no difference) it was downhill all the way to the summit.

After taking my leave of the common, I headed back to Glenderamackin Col then down the path past Scales Tarn. 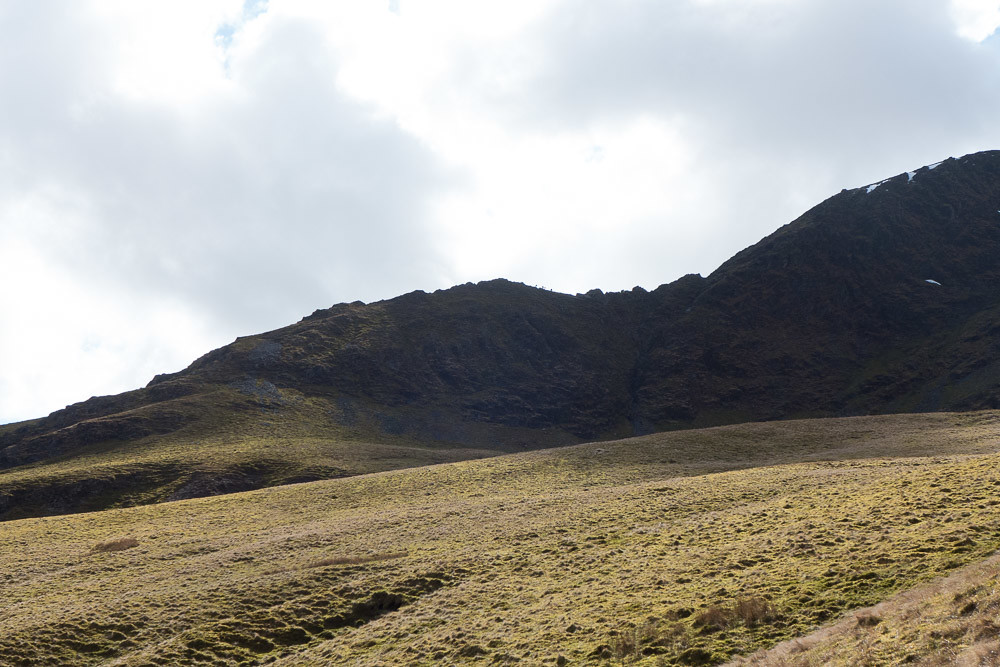 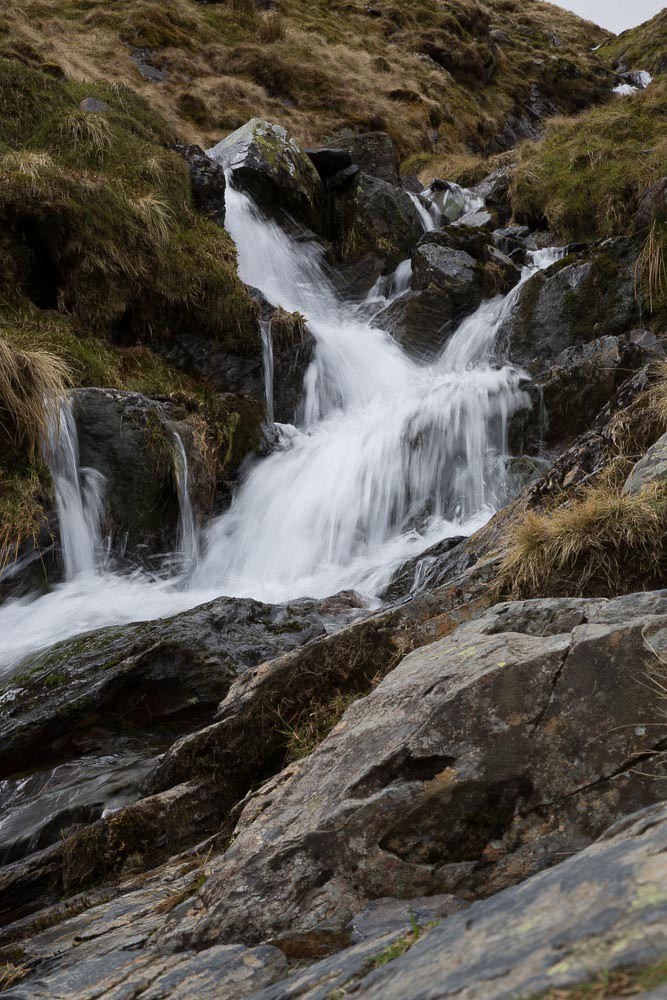 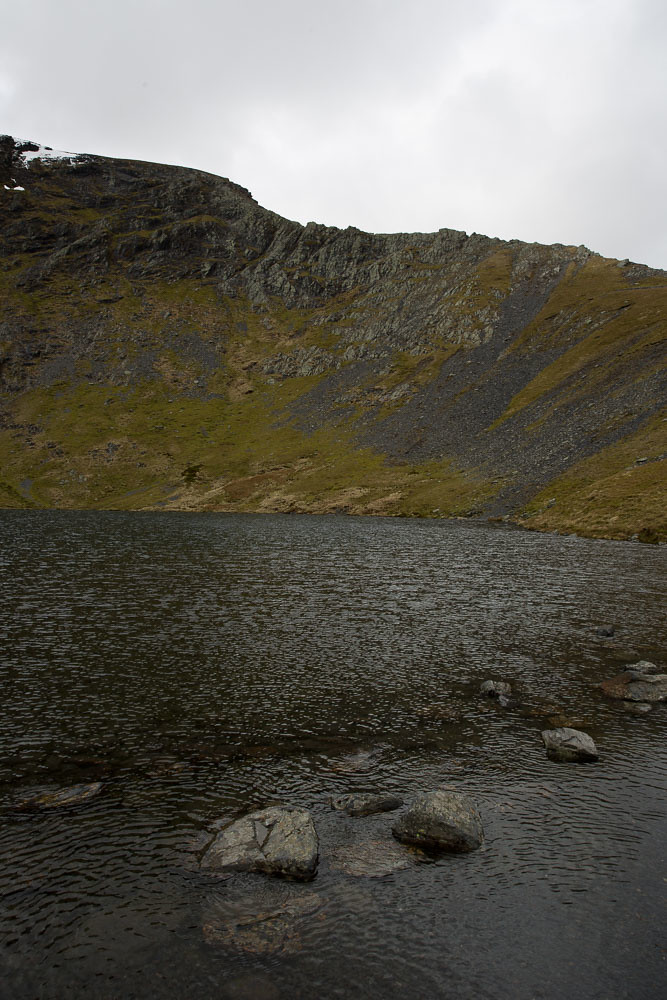 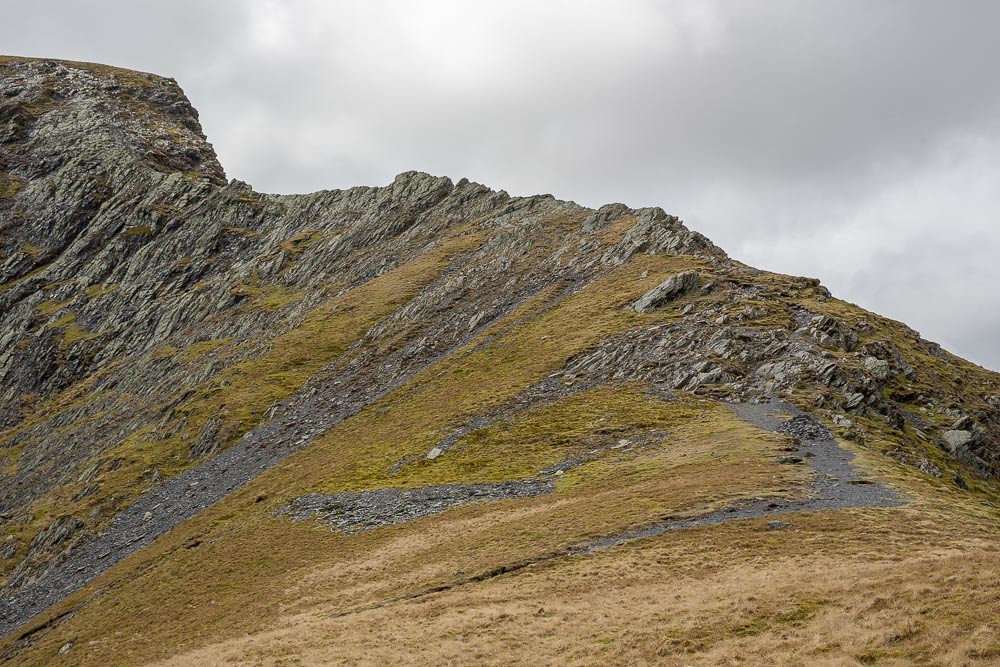 I waited a while for decent light, though it never really arrived, then headed back down to Mousethwaite Col. I got there in good time, and decided to carry on to Souther Fell summit before returning to the car.

Great views in all directions from Souther Fell 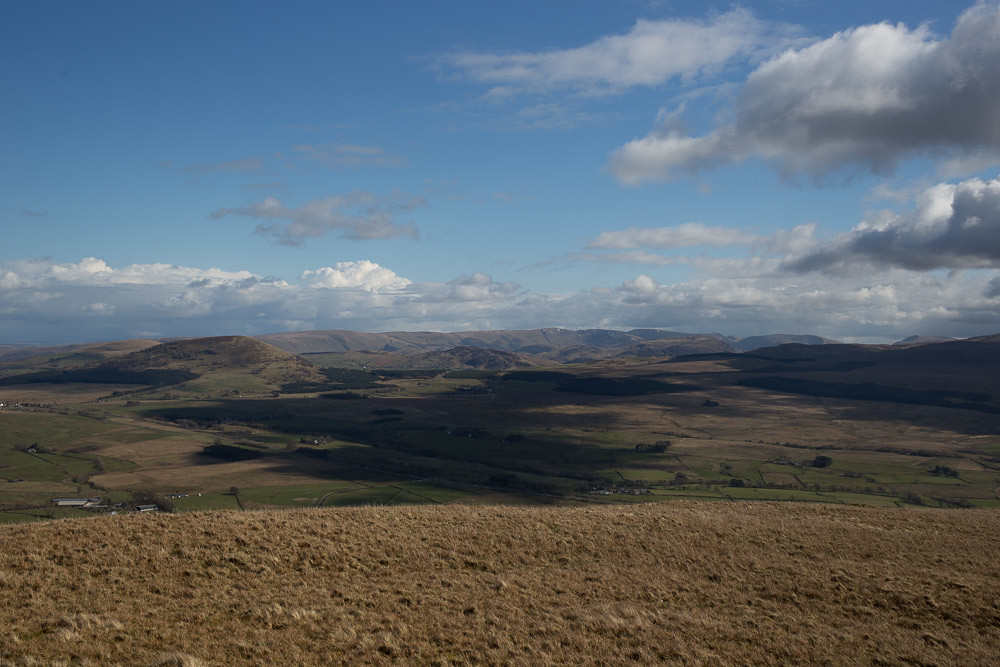 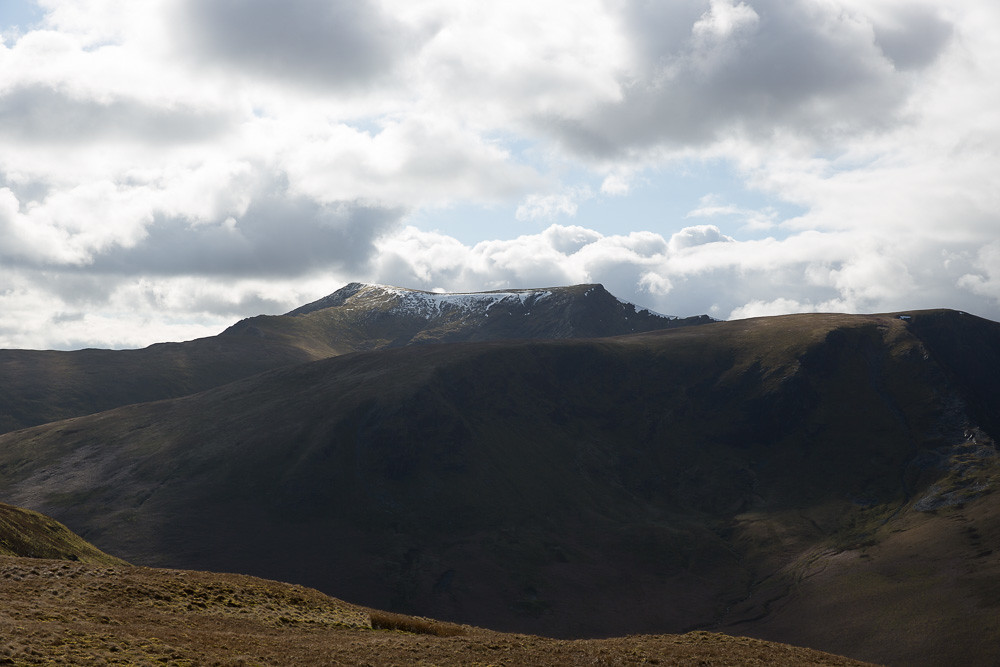 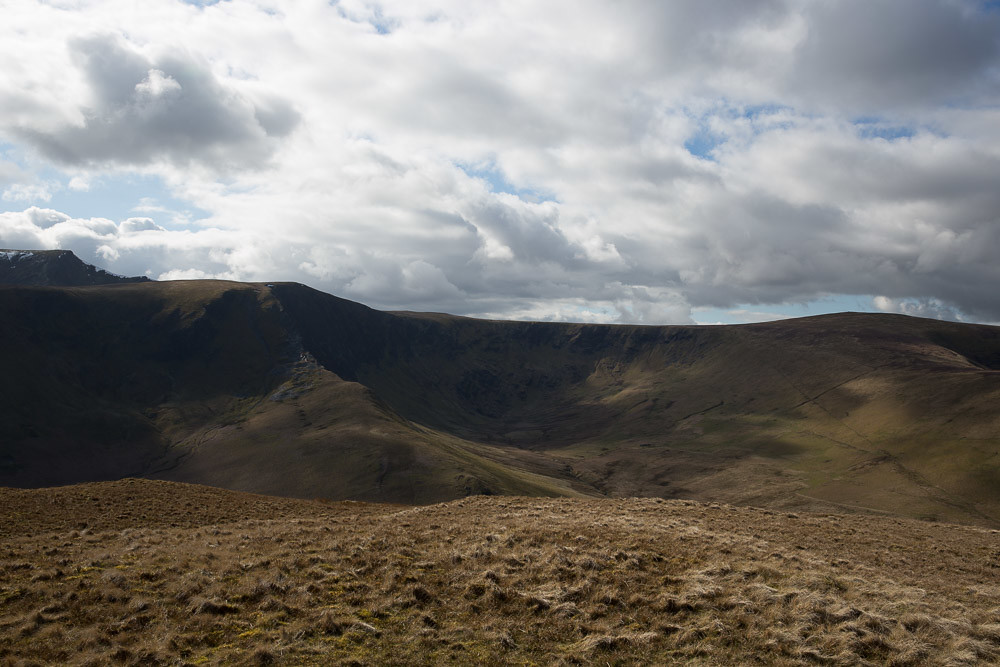 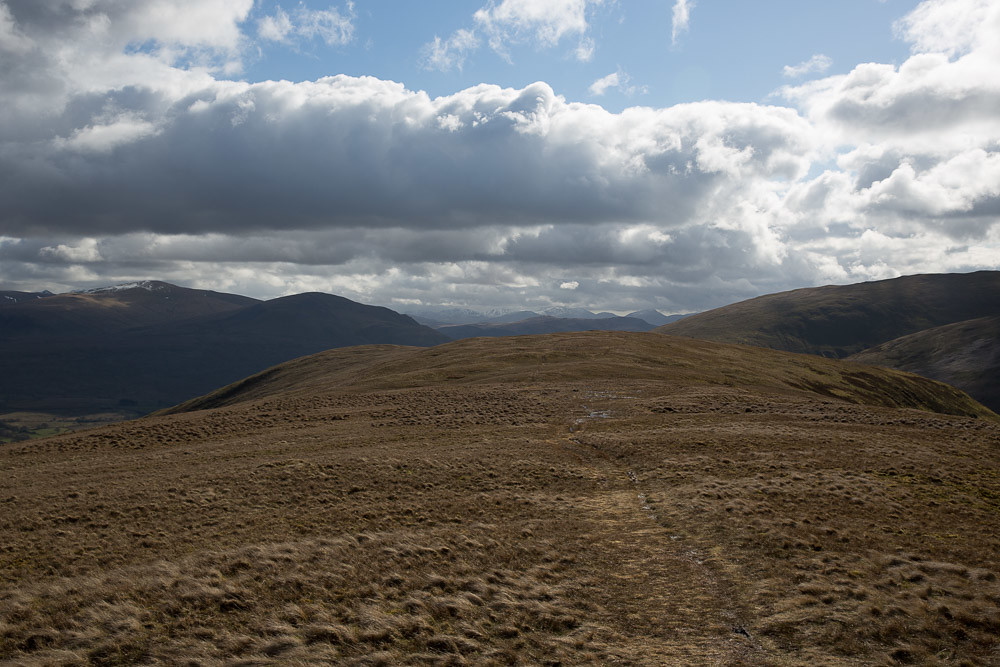 Then back to Mousethwaite Fell for the last time, and down to the car. 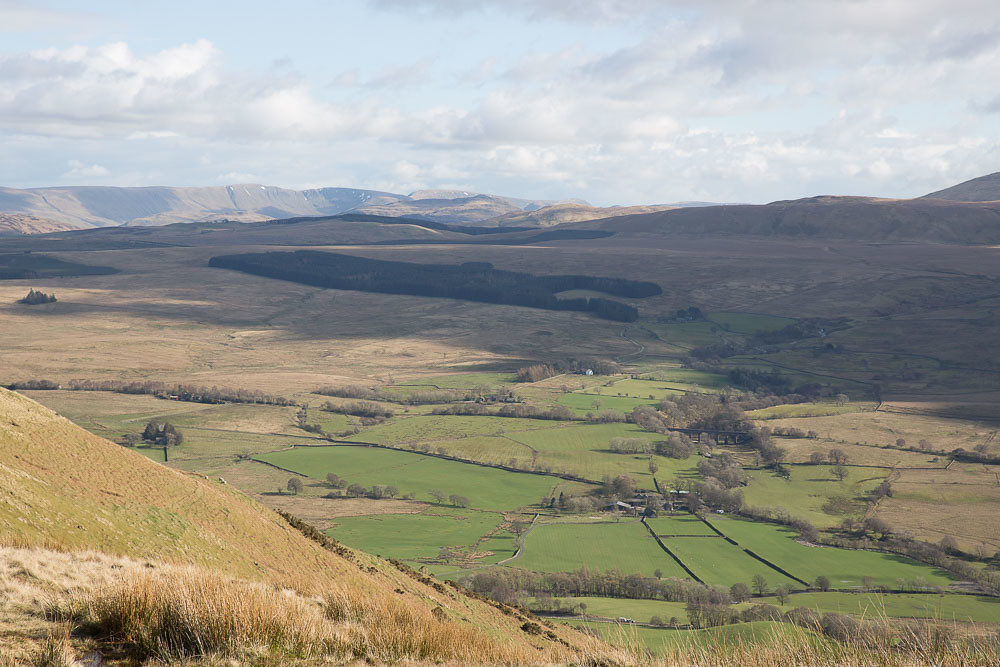 A most enjoyable walk, despite my reservations about Mungrisedale Common. Views of Blencathra more than made up for it.

Re: Mungrisedale Common - it's not so bad!

The gang deserted you again RC

Can't understand how anyone might find this hike anything but wonderful, beautiful scenery throughout (wonderful photos may be helping) but all in all I'm with you, not so bad at all

Re: Mungrisedale Common - it's not so bad!

Good report and equally good photos, enjoyed your report, thanks.