White Coomb.gpx Open full screen  NB: Walkhighlands is not responsible for the accuracy of gpx files in users posts

Sunny Saturday: time for a trip to the Moffat Hills! I'd been a little unsure how much snow was left in the Southern Uplands but the drive down revealed that there was hardly any left, and the previous night's snowfall hadn't really settled although the distant Lowther Hills looked to have a dusting. The road through Moffat Dale is one of my favourites, and we reached the parking area beneath the Grey Mare's Tail waterfall all too soon. The path up Tail Burn can be seen clearly above the landslips, with a restricted view of the magnificent waterfall along with a few interpretation panels before the ascent starts. The climb is steep at first, but the £1 National Trust for Scotland parking charge gets you steps and an excellent path. First there are good views over Moffat Dale, but the Grey Mare's Tail soon takes centre stage: Beyond the main waterfall there are a few more cascades as the gradient eases towards Loch Skeen. Loch Skeen was a bit further than expected, but what an amazing view! Surely one of the most underrated parts of Scotland? The path to Lochcraig Head is set back from the eastern shore of the loch, and (I think) leaves the main path just before you actually reach the water's edge. We wanted to enjoy the shoreline views a bit longer so stayed on the slowly deteriorating lochside path for a bit, before heather hopping across to the other path. This follows a fence (and later also a wall) all the way to the summit. At first a minor ridge keeps things dry, but the path soon deteriorated with a few serious quagmires probably not helped by the overnight rain / snow. Meanwhile, the sheep watched with amusement as we attempted to keep our feet dry. Once on the slopes of Lochcraig Head itself, the going improved and thanks to the low stone wall there are plenty of places to sit for lunch, with great views back to Loch Skeen. White Coomb was beyond, looking quite a way away. The summit lies just over the fence to the north. There's a miniscule cairn but the much better views are from a larger one on the edge of the southern crags. View from the actual summit: And from the better one: Several minor summits lie on the broad ridge between here and White Coomb. Fortunately the going is almost flat except for one initial descent and 70 metre re-ascent to Firthybrig Head. I was expecting it to be soggy, but the sun was drying the ground out nicely now, and any wet patches were easily bypassed. The walkhighlands description describes the terrain as a bit featureless, but it was quite enjoyable with good views. Looking back to Lochcraig Head from Firthybrig Head (you could detour north from here to Molls Cleuch Dod, which is a Donald): 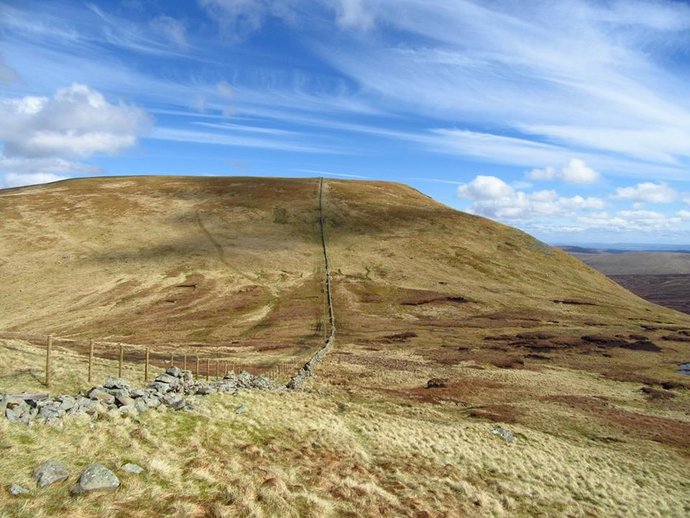 Before we knew it we were at White Coomb, where we met the first walker since Loch Skeen (although others were visible in the distance at points on the ridge). Some lovely cloudscapes around today, but the forecast heavy showers hadn't really materialised - we could only see one distant one far to the south-east. We didn't stop for long here, as the ground on the descent looked more interesting. Indeed it was, even with a short, steep section where hands came in useful. Moffat Dale beckoning: Further down, Loch Skeen crept back into view: The last little complication came at Tail Burn. Not sure where the promised "stepping stones" were

but instead, there were lots of "nearly OK" crossing points. All involved slightly ambitious jumps - since I'd miraculously escaped the earlier bogs with dry feet, I didn't want to end that now! Downstream the ground steepened towards the waterfall, so we headed upstream. After a short way I gave up and started taking my boots off for a barefoot crossing - it wasn't deep. Just after having removed my socks, my partner shouted that he'd found a good point to cross just around the corner. Boots back on and I ran up to have a look. Easy peasy. A few steps on good boulders, then a short hop onto the far bank... which I missed completely, one foot going right into the burn. Whoops...

Never mind - back to the car on the outward path which was now extremely busy. And deservedly so - one of Scotland's most sublime spots.

Re: White Coomb, sublime Loch Skeen & a sting in the Tail (B

I agree it's a lovely part of the country. You got some superb cloud photos all the better for the lovely blue sky!
I got caught on Lochcraig Head at the beginning of a thunderstorm a few years back and realised I was standing on a huge hill with two metal poles in my hands just as lightning threatened. Usain Bolt had nothing on me that day I tell you

Re: White Coomb, sublime Loch Skeen & a sting in the Tail (B

laconic surf wrote:I agree it's a lovely part of the country. You got some superb cloud photos all the better for the lovely blue sky!
I got caught on Lochcraig Head at the beginning of a thunderstorm a few years back and realised I was standing on a huge hill with two metal poles in my hands just as lightning threatened. Usain Bolt had nothing on me that day I tell you

yes, we've so far been lucky and never been caught in the hills during a lightning storm. We don't carry poles, but I can imagine they wouldn't exactly make you feel safer in that situation!